BACK TO ALL NEWS
Currently reading: Quick news: Manchester United-signed Chevrolet Trax on sale
UP NEXT
BMW M3 and M4 get radical new look, more power and 4WD

Chevrolet is auctioning a Trax, signed by Manchester United's first team, to raise money for charity. The winning bidder will receive a Chevrolet Trax 1.6 LT with a liveried bonnet signed by the team.

Nissan is offering students insight into its manufacturing, research and development and product design divisions as part of its involvement with the Government's 'See Inside Manufacturing' initiative. The scheme is hoped to encourage the next generation of the UK's manufacturing talent. 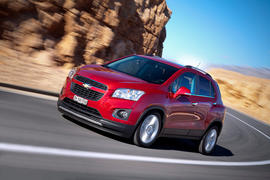 Following a well-publicised management restructuring the Trax still impresses up front, but is no longer the class leader it once was in the back. Future availability in Europe currently uncertain.

Well, someone had to say it first...

I presume this Trax will be

I presume this Trax will be immune from being caught speeding and will somehow eek out more MPG than the stated figures and will cost a damn sight more than it's rivals but be worse performing, with the finger of blame pointing elsewhere.

Customer: "And the X decal, that means it's the AWD version?"