BACK TO ALL NEWS
Currently reading: Porsche targets Lamborghini Urus with new 631bhp Cayenne
UP NEXT
Hidden gems: A peak behind the scenes at Beaulieu

A more powerful top-end version of the Porsche Cayenne Turbo is being plotted by Porsche , aimed squarely at the most potent super-SUVs on sale, including the Lamborghini Urus and Bentley Bentayga Speed.

To be revealed as a member of the updated Cayenne line-up at the end of June, ahead of planned UK deliveries later this year, the heavily upgraded model is the most powerful pure-combustion Cayenne yet, boasting up to 631bhp from a tweaked version of Porsche’s twin-turbocharged 4.0-litre V8 petrol engine. It will be called the Porsche Cayenne Turbo GT.

The as-yet unnamed new variant will be sold exclusively in the rakish-roofed Porsche Cayenne Coupé bodystyle, in a move aimed at ensuring it offers the best possible combination of performance and dynamics. The standard Cayenne Turbo will remain on sale.

“There are advantages in choosing the Coupé. It is lighter and has a slightly lower centre of gravity than the SUV. Our intention is to deliver not only the most powerful but the sportiest Cayenne to date,” Rico Löscher, the engineer in charge of the new variant’s development, told Autocar during a recent prototype drive of the new model in Germany.

There is also a reworked front bumper, featuring a more pronounced lip spoiler and larger air ducts than those of the standard facelifted Cayenne, seen recently in prototype form. Meanwhile, the roof spoiler gains additions at each side and the rear wing, which deploys from the trailing edge of the tailgate at speed, has been visibly upsized. A new rear diffuser houses a pair of substantial centrally mounted exhaust outlets. 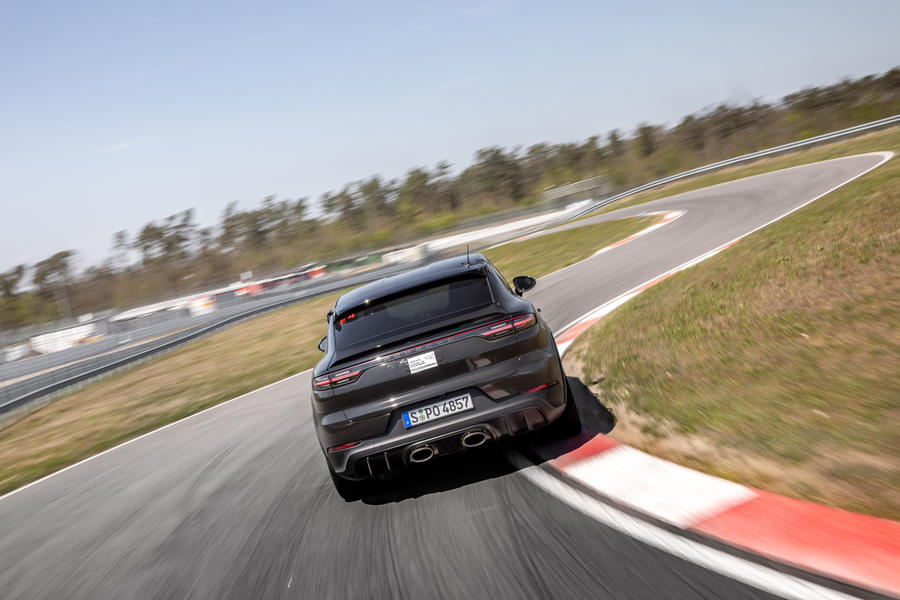 The newcomer uses various parts from the Lightweight Sport package offered as optional equipment on the standard Cayenne Turbo Coupé, including a contoured carbonfibre roof panel. Porsche has yet to confirm a kerb weight, although it is claimed to undercut the 2200kg of the standard model.

The Cayenne Turbo Coupé’s powerplant is boosted by 89bhp to 631bhp. This is 39bhp more than the same twin-turbocharged 4.0-litre V8 produces in the Audi RS Q8 and just 10bhp less than it does in the Lamborghini Urus - one of the most powerful and fastest SUVs on sale today. Torque has also increased by 60lb ft to 626lb ft.

Details of the engine modifications have yet to be revealed, although Autocar can confirm that it gets a titanium exhaust system and new engine management software among its bespoke upgrades. In line with the added performance, Porsche has revised the software for the eight-speed torque-converter gearbox and four-wheel drive system, which receives a more rear-biased apportioning of power. The electronic differential is also altered to provide enhanced torque vectoring and greater lock-up.

“The idea behind the new model is to mate added performance potential with the heightened engagement and overall dynamic ability of the Porsche Cayenne GTS,” said Löscher. 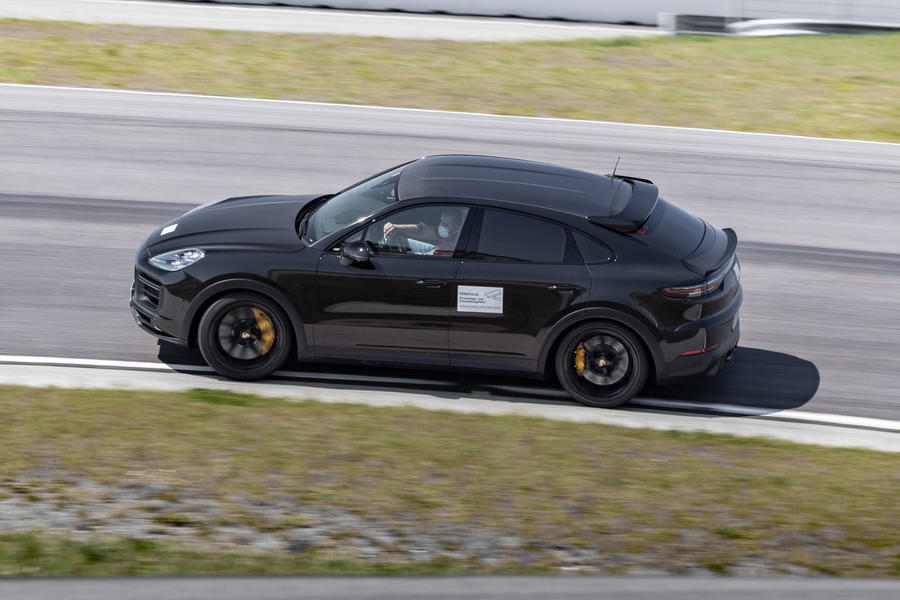 No performance claims have been made at this stage, although the upgraded Cayenne Turbo Coupé is said to have established a 0-62mph time inside the official 3.8sec of the Audi RS Q8 and 3.6sec of the Lamborghini Urus during recent testing. Top speed is limited at 186mph.

It rides on standard-fit 22in forged aluminium wheels, shod with 285/35 ZR22 front and 315/30 ZR22 rear tyres - the largest tyre Porsche has offered as standard on the Cayenne. The greater offset of the new wheels marginally increases the track widths at each end, while allowing for an increase in negative camber on the front axle.

The adaptive air suspension has been lowered slightly and the damper rates made firmer. Further dynamic changes are focused on the tuning of the electrohydraulically operated active roll stabilisation system and steering – the latter incorporating Porsche’s Power Steering Plus rear-wheel steering system. The brakes, meanwhile, adopt the same ceramic-composite discs and calipers available as an option on the standard model.

Log in or register to post comments
jason_recliner 22 May 2021
We're going to need a Harley Davidson, a shark, and The Fonz.
Hugobear1 21 May 2021
Is it fun driving a 4x4 like a super car? I find my 350 bhp Cupra Ateca a bit overpowered tbh.
si73 20 May 2021
Well I suppose if making these is what enables Porsche and Lamborghini to continue making sports cars and super cars, then so be it, but I don't really get that sentiment when they are owned by the same large corporation, why do Porsche need SUVs to survive when Audi etc produce them, surely that the main company is in good health should enable Porsche to concentrate on its sports cars? Obviously not though.
View all comments (12)