BACK TO ALL NEWS
Currently reading: Volvo C40 Recharge now available to order from £57,400
UP NEXT
Agents of change: how car buying is changing

Volvo has shown off the new all-electric C40 Recharge to the public at this year's Goodwood Festival of Speed, ahead of production starting this autumn.

Order books are now open for the coupé reworking of the new XC40 P8 Recharge, which becomes the Swedish manufacturer's first exclusively electric model. Prices start from £57,400 and customers can place orders online only.

“We call it the future of Volvo,” said Lex Kerssemakers, Volvo’s head of global commercial operations. “It's our first ever electric-only model and represents a significant step in our plan to move online for the benefit of consumer convenience. It is, in short, a completely new take on a Volvo.”

With deliveries due to commence before the end of this year, the C40 has been launched in line with Volvo’s ambition for half of its global sales to be full EVs by 2025 and for it to be an EV-only firm by 2030.

Built on the XC40 P8's CMA platform, the Audi Q4 E-tron and BMW iX3 rival gains a sloping roofline and a new rear light design. The front features a progression of that car's closed-off grille, which is “a new face for electric Volvos”.

At 4431mm long and 2035mm wide, the C40 has the same exterior dimensions as the XC40, except it’s 690mm shorter, at 1582mm, due to its coupé-like roof. The sloping rear marginally reduces rear passenger head room by 62mm, although boot capacity is scarcely impacted, at 413 litres. There is also a 31-litre under bonnet 'frunk'.

While the sloping roof gives it a more hatcback-esque design, Volvo says the C40 still offers the raised seating position that "most Volvo drivers prefer". 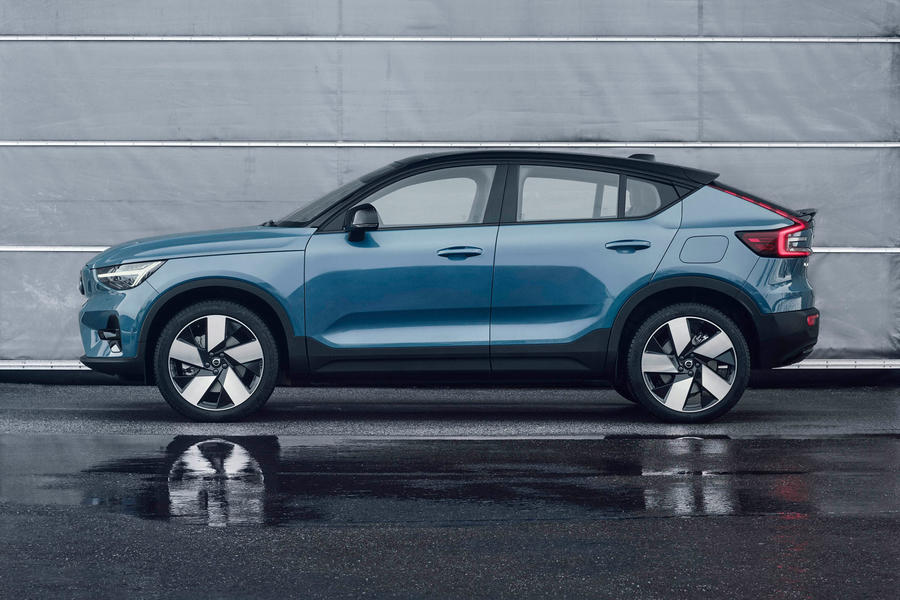 The C40 uses the same powertrain as its XC40 P8 and Polestar 2 relations, with a 201bhp electric motor mounted on each axle for combined outputs of 402bhp and 487lb ft at 4350rpm. This results in a claimed 0-62mph time of 4.9sec. And, as with all Volvo models now, its top speed is limited to 112mph.

A 78kWh lithium ion battery offers an estimated range of 260 miles. It can be charged at up to 11kW by an AC charger and up to 150kW by a DC charger, the latter allowing an 80% charge from empty in around 40 minutes. Volvo says that the car's range should improve over its lifetime through planned over-the-air software updates.

The C40 sits on MacPherson strut-suspension up front and a multi-link set-up at the rear.

The new SUV will be offered with a range of unique interior trim colours and lines and will be Volvo’s first completely leather-free model. It also features Volvo’s new Android-based touchscreen infotainment system, which was jointly developed with Google, and will be offered with unlimited data usage to enable over-the-air updates. That system, which was first used in the XC40 P8, offers a significant step forward over its previous infotainment system.

As well as offering the C40 with only a fully electric powertrain, Volvo says that it has “dramatically reduced” the number of variants in the range to simplify and speed up the purchase process. However, like the XC40 P8, it will likely be offered with a number of different power outputs and battery capacities. 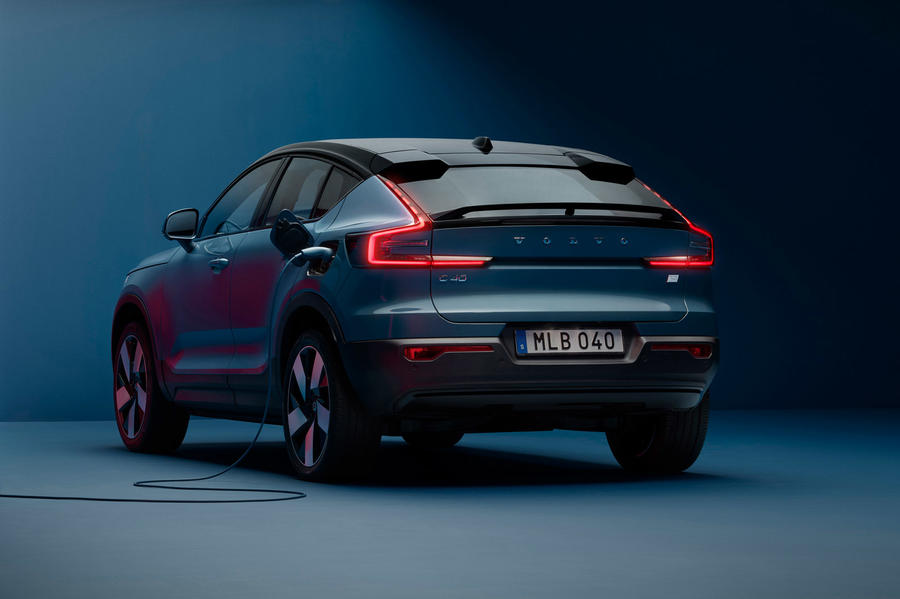 As with all new electric Volvos, the C40 will be available exclusively online, either to buy outright or to obtain through the Care by Volvo subscription scheme. It will also be sold with a ‘care package’ that includes servicing, a warranty and roadside assistance, along with insurance and home-charging options where available.

The C40 will be produced alongside the XC40 at Volvo’s factory in Ghent, Belgium. It will be followed by an electric version of the next-generation XC90 seven-seater – tipped to arrive next year – and a smaller SUV built on a new platform, set to be named the XC20.

Volvo sets sales record in second half of 2020

I laughed out loud when I saw they want 60-grand for this tadpole looking blob. The thing weighs 2.5 tonneau, has pitiful range, and is so ugly. Good luck selling any. I don't know what anyone sees in any Volvo. Not one that I've driven or ridden in feels the least bit premium. They all feel like they could be cheap front wheel drive Toyotas with marginally nicer interiors. What I can't understand is how even the most expensive XC90/V90/S90 (and all of these lesser models) doesn't even have a power adjustable steering column. Other than exterior styling of some models, there's nothing to like about any Volvo on sale today.

The car is a joke, the price is a joke.

I really like what Volvo are doing in general, but this is just meh. What's the point of the cut down rear and I dunno, it just doesn't feel like 50k's worth. Filling in a gap in the product range, a bit like the germans did for the last 5 years, even if it's a pretty pointless car. Just get a Polestar 2, or an XC40?