BACK TO ALL NEWS
Currently reading: Nio gearing up for European launch later in 2021
UP NEXT
Ford backs call for European ban on new ICE cars from 2035

Nio gearing up for European launch later in 2021

Rapidly growing Chinese EV manufacturer Nio remains on track for a European launch in the second half of this year – and it will soon make a decision about which models the region will get first.

Speaking exclusively to Autocar, the brand’s Europe vice-president, Hui Zhang, confirmed it remains confident of its viability in Europe.

“We fully believe that, in Europe, the awareness of environmental protection and sustainability is much bigger for the consumer compared with on any other continent in the world,” he said.

Nio is enjoying considerable growth in its home market, where it posted record sales each month in 2020, despite the Covid-19 pandemic, largely as a result of its mostly digital ‘O2O’ (online-to-offline) retail model in the region.

Zhang said: “Our Nio app has more than 1.4 million downloads and more than 200,000 daily active users. We had done the base work already. We just needed to organise and activate things a bit differently to the period before the pandemic. I’m not saying we benefited from the pandemic, but we could leverage the O2O business model during the period.”

Whether the company will look to develop a physical dealer-led model in Europe hasn’t yet been confirmed.

Zhang said Nio’s research shows that “two-thirds of customers in Europe won’t buy a car before test driving” and that although some 88,000 cars have been sold through Nio’s retail app in China, “we’re fully aware the customer still needs to touch, smell, see and test drive the car, especially in the European market”. Nio already has an operational presence in Europe, with an engineering centre in Oxford and a global design centre in Munich, and Zhang pointed to the brand’s continued promotional and press output in Europe as a sign of its continued intention to sell cars in the market.

However, it remains to be seen which of its four electric production cars will be the first to arrive. The closely related ES6 and ES8 SUVs have been on the market for longer, but Zhang was keen to point out that the EC6, launched last year, is already the best-selling car in China’s SUV-coupé segment, outselling even the BMW X4. 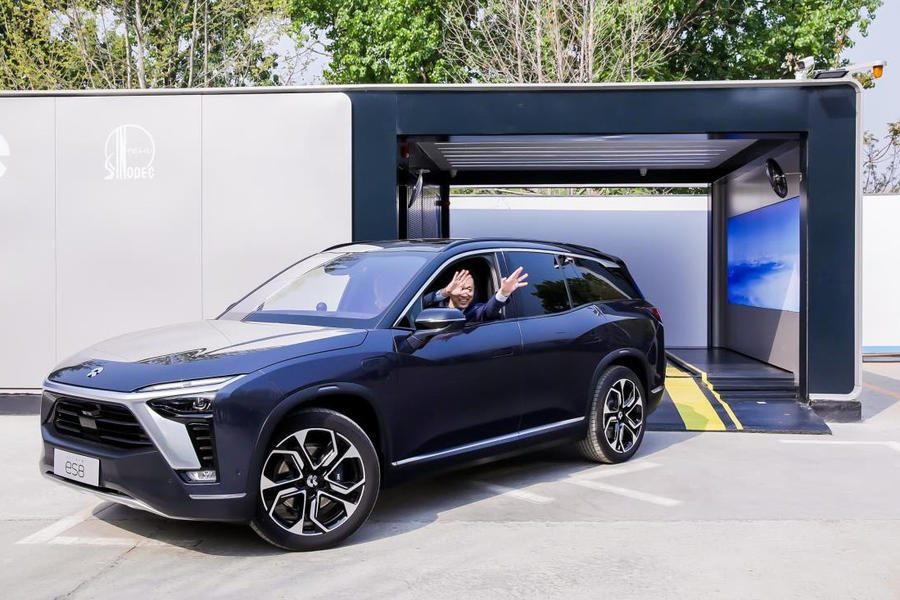 The ET7 saloon, with a solid- state battery promising more than 600 miles of range and a host of advanced autonomy features, has yet to go on sale in China so is unlikely to arrive in Europe immediately.

Zhang said: “We will consider very carefully which is the best model for the European market and which will come here.”

The company’s most recent product unveiling was what it calls “the world’s first mass-produced battery-swap station”. Capable of swapping 312 batteries daily, it is the latest development of Nio’s Battery as a Service (BAAS) system, which aims to enhance EV usability and reduce initial purchase prices.

In China, Zhang said, opting for BAAS reduces the price of an ES6 by the equivalent of £7800 and Nio believes that it “can help more potential users switch from ICE to EV”. The biggest obstacle to introducing the service in Europe will be the varying infrastructure regulations of each country, Zhang said, but he wouldn’t deny outright that a European launch of the model is a possibility.

Germany is marked out as one likely market for Nio, given recent financial and policy decisions by its government to encourage the mass adoption of EVs, but Zhang said: “The UK is one of the biggest markets in Europe, including for the premium segment, so there’s no reason we wouldn’t go there.”

Norway will be the brand's point of entry into Europe, as confirmed this week. Further details on timing and specific models will be confirmed on 6 May.