Jeep is set to renew its flagship model in Europe – the eight-year old Grand Cherokee – within the next two years, and prototypes have been spotted for the first time in the US.

Seen in heavy body camouflage that doesn’t reveal much about the design, we can at least see that the Volkswagen Touareg rival will grow in size, offering a longer wheelbase and chunkier rear overhang. The latter feature would suggest the Grand Cherokee could be offered as a three-row model, but Jeep’s product plan outline (below) shows otherwise. 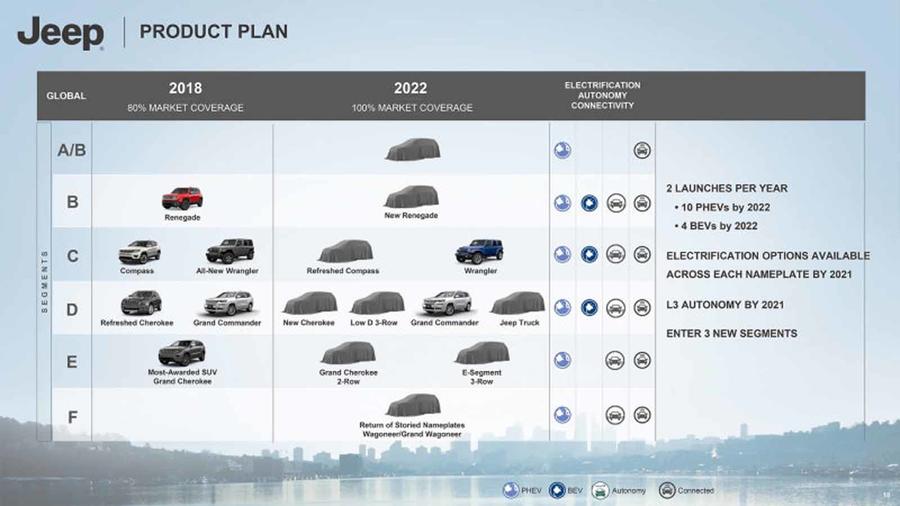 We know that the new Grand Cherokee will make use of an enlarged, adapted version of Alfa Romeo's Giorgio platform, a fact confirmed by the late FCA CEO Sergio Marchionne in 2017. While the car maker’s product plan is shifting slightly as his replacement, former Jeep boss Mike Manley, makes his mark, it is understood that this is still the case.

The Giorgio platform won’t just grow in size, it will also be revised to suit the Grand Cherokee’s off-road focus. Independent suspension all-round can be seen on this prototype, but the platform also allows the fitment of electrified powertrains for the first time.

Expect to see mild hybrid variants as a matter of course, with plug-in hybrid options available soon after the car’s launch. Whether the base engine for Europe will remain a V6, or Jeep will look towards a turbocharged four-cylinder option, remains to be seen. There’s also a further question mark over a diesel option - Marchionne claimed FCA would begin to phase out the fuel in 2022, but it’s still the majority seller for the Grand Cherokee in Europe.

Jeep also plans to introduce Level 3 autonomy - under which a driver is still required to monitor the vehicle but it can operate entirely by itself in certain road conditions - just before the Grand Cherokee's arrival, so that'll likely be available on high-spec variants.

Jeep’s product plan has the Grand Cherokee as a 2022 model year car, so the current model is still expected to live on for a while yet. Expect to see the new car unveiled in 2021 and on sale before the end of that year.