BACK TO ALL NEWS
Currently reading: New Volkswagen Golf to feature class-leading technology
UP NEXT
Southern comfort: Bentley Continental on the English Riviera

The next-generation Volkswagen Golf, to be unveiled this month, aims to revolutionise the volume hatchback market with 48V mild-hybrid engines and technology not yet seen in the class.

The German maker is betting on the new Mk8 Golf to secure its foothold in the shrinking segment – down 16% globally in the first half of 2019, according to analyst firm JATO – by offering not only class-leading technology but also the lowest CO2 emissions, important for running costs and the brand’s social responsibility standing.

He said: “We are now in pre-production, in the phase to make sure that one part fits perfectly to another. Everything we did on the prototype is nice but now it’s time to see whether it works in the series solution. We are testing in Germany, America, Spain, China – everywhere.” 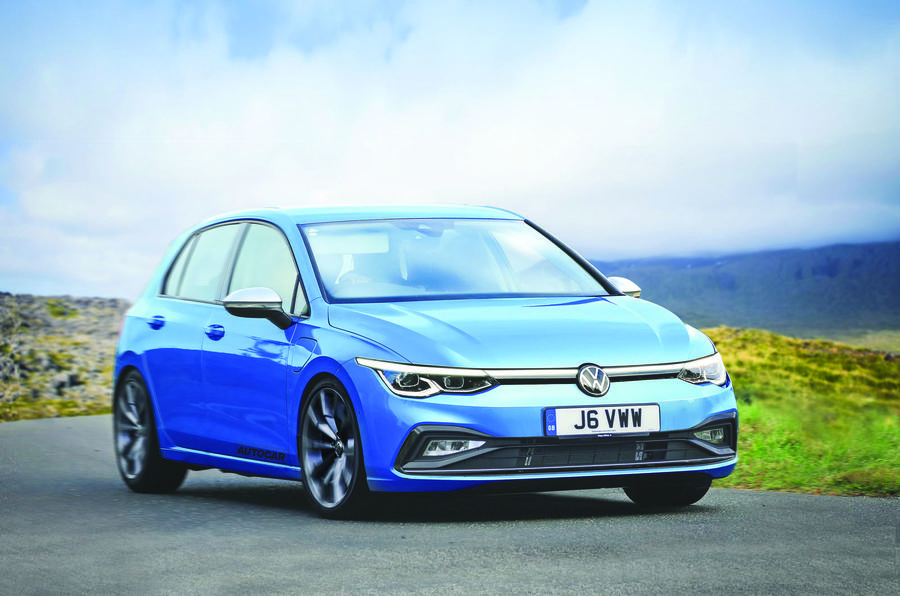 There has been much debate about the Mk8’s engines and which should use hybrid tech, with decisions understood to have been reversed following the departure of Matthias Müller as CEO and subsequent appointment of Herbert Diess.

The outcome, Welsch said, is that the volume engines – the 1.0-litre and 1.5-litre petrol units – will be available with a 48V system with VW’s dual-clutch transmission only. The 1.0-litre will make 129bhp and the 1.5-litre 148bhp. It isn’t yet known which engines will be offered with a manual gearbox.

Welsch said: “We have 48V on the mainstream petrol engines but not on the diesel. The diesel has better CO2 emissions anyway and diesel is more expensive so to keep it balanced, we did it only on petrol.

“The 48V mild hybrid is not only good in terms of CO2 but also comfortable driving. You won’t hear the restart on the start/stop system. It’s much more powerful with the mild-hybrid starter/generator system. Even while driving, if the car is just rolling, you don’t need extra power. The engine turns off while driving, and if you just touch the pedal, it starts again and you don’t feel it. It’s very comfortable.”

Alongside the two volume petrol engines, there will be an updated version of the 2.0-litre TDI diesel, codenamed EA288 Evo, which has been significantly re-engineered to reduce exhaust pollution. There is also a more efficient and responsive turbocharger and the engine itself is lighter. VW has claimed the unit offers an average of 9% more torque and power together with an average 10g/km decrease in CO2 emissions.

Welsch said the new Golf will be “leading again in terms of CO2 emissions,” stating that its most efficient variant under WLTP testing will be just into three figures. Welsch said: “We are in the process of homologation now and two or three engines are already done. CO2 [in the Mk8] is a huge step. We’ve optimised engines and aerodynamics.” 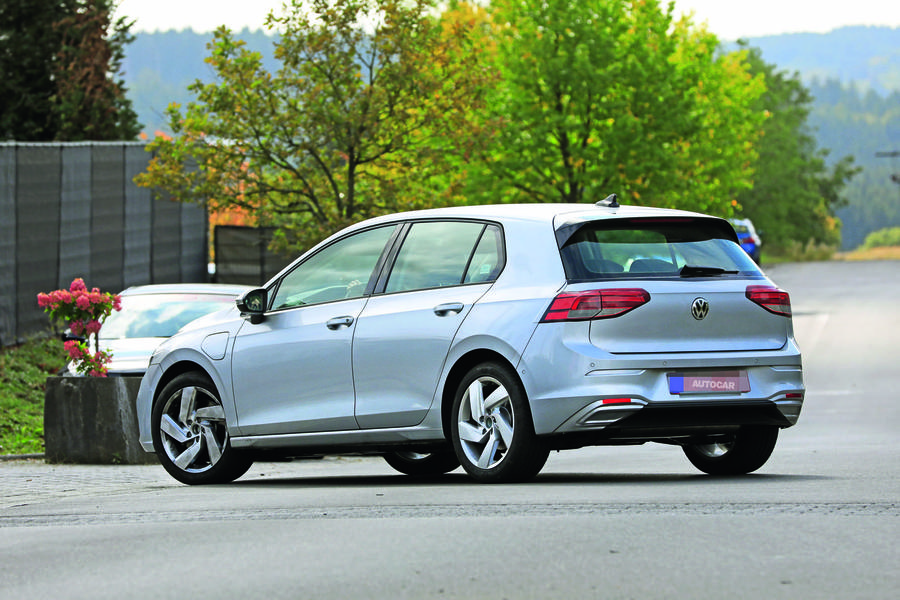 The Golf GTE plug-in hybrid will also continue and offer a power boost, while a lower-powered hybrid will also be available. “Today’s GTI is 241bhp so the GTE should also have 241bhp, so it’s really a GTE.” Welsch said. “But there are some people who just want to stay with a similar plug-in hybrid to today so that is why we’re offering the 201bhp, too. It comes without the GTE trim and [appears] as a normal Golf.” There will be no e-Golf as VW focuses on its electric ID 3.

The next Golf GTI, due to arrive by late 2020, is set to use much of the hardware from the Mk7 Golf GTI, including an updated version of the EA888 2.0-litre turbocharged engine, which will exceed the 241bhp of the current iteration. 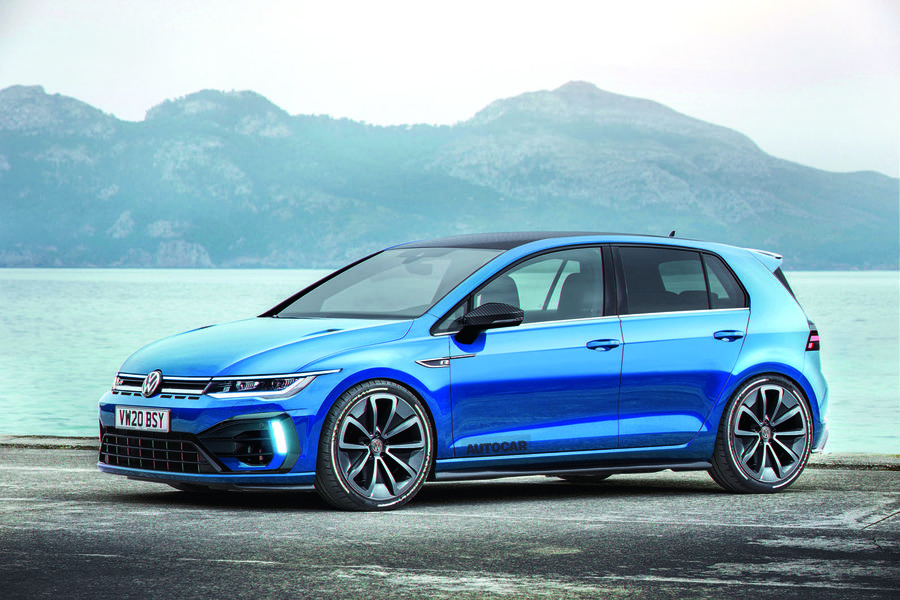 The Mk8 Golf is underpinned by an evolution of the existing model’s MQB platform, featuring a MacPherson strut front and multi-link rear suspension in combination with adaptive damping control.

Engineers involved in the new car’s development say major attention has been focused on steering accuracy. The electromechanical set-up of the outgoing car has been heavily reworked to provide it with added levels of feedback and a more direct ratio.

The new Golf’s design, as ever, will not be a dramatic overhaul from its predecessor’s, given the loyal fan base of VW’s third biggest-selling car globally, behind the Tiguan and Polo. Welsch said: “It’s the same story we started with Mk1 and Mk2. It’s an evolutionary process with very small but clear steps. It’s a little bit more dynamic.”

Volkswagen Golf GTI: which generation beats them all?

Welsch said the roof line above the C-pillar has been lowered slightly and the belt line has been moved up, to create more dynamism. He said: “The Golf today is a little bit more horizontal. This design makes it look optically faster. We made it a little bit dynamic but everybody would know it’s a Golf without any logo and despite it being the new one.”

Despite VW wishing to give its new electric ID brand separate design to its conventional models, the front lighting design of the ID 3 will be reflected in the Golf. Welsch confirmed the Golf will have the same floating light line leading to the new VW logo on the bonnet. That, too, will also be illuminated in countries outside of Europe, where it is illegal.

It is the interior, described as “two steps” forward by Welsch, where we’ll see major changes. 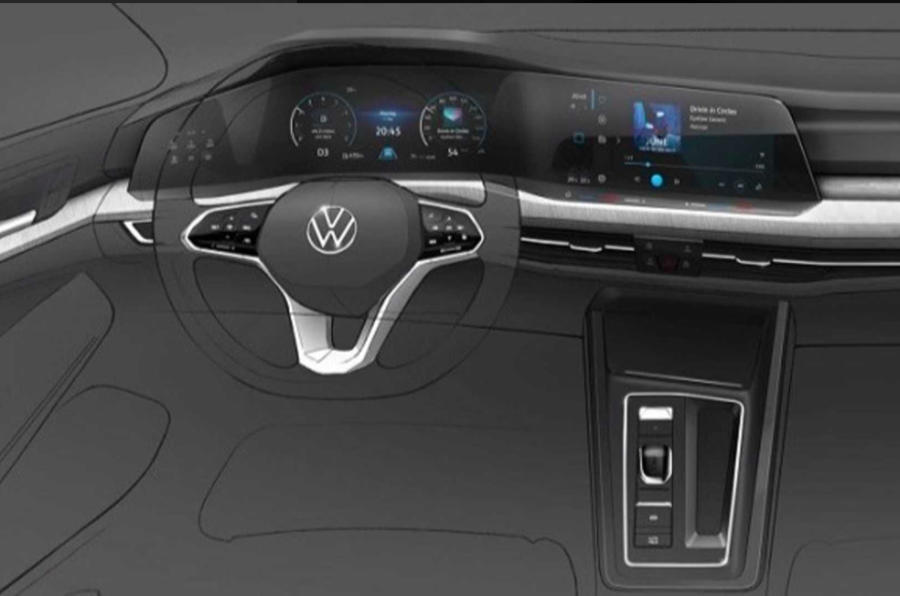 Already shown in sketch form (pictured above) – “close to what you are going to see,” said Welsch – the interior is devoid of classic cockpit cues, removing most of the instruments and instead using two 10.0in screens, as well as a head-up display.

“There are not too many buttons. We have voice control,” said Welsch. “All the things we have create a better atmosphere. There are ambient lights all the colours of the rainbow! People love this stuff. It’s like the new chrome.”

Although the interior design is notably different from the ID 3’s, the idea of simplification is the same and connectivity features, such as over-the-air upgrades, will also be echoed.

One key focus is driving assistance systems intended to offer the utmost in comfort and safety. Welsch said: “Golf, let’s say, is lower-middle class, and we’re bringing things from the upper class. There are also car-to-car and car-to-X communication systems.” The new model is expected to add more self-driving capability and features such as Area View, which feed live images from the car into the cockpit.

There will not be a three-door Golf, with VW choosing to focus on the five-door and estate variants as it streamlines its range in a bid to maximise cost efficiencies and profits. The estate will have a 50mm-longer wheelbase and longer rear overhang than the hatchback. 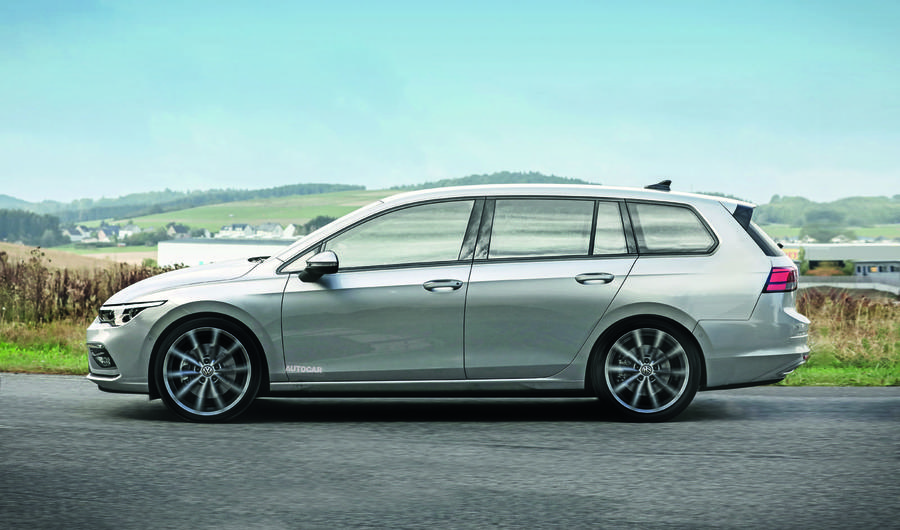 Jürgen Stackmann, VW board member for sales and marketing, said: “Golf has been holding very strong, keeping its position as uncontested number one in Europe for many years. And even in run-out, it remains a very strong seller and our job is to keep it [at the top] in segment share.”

He added: “The next generation will bring all of the technology and all of the advancements that is necessary to keep that position. Obviously, it will be the best Golf of all Golfs. In its class, it will have the best CO2, the best technology, the best digital footprint.”

Following the recent launch of the ID 3, Stackmann doesn’t see a risk of cannibalisation of sales, for now. “If you look into the mindset of who’s buying Golf and for what reason, they want the same as before,” he said. “They love Golf for what it is. They love technology but they don’t go wild. In the long term, in maybe six or eight years, we will start to see crossover between Golf and ID 3 customers.”

New Volkswagen Golf GTE will have 201bhp and 241bhp variants​

i'm embarrassed to have owned two Audis and two VWs. never again. This company has the audacity to continue to fight court cases against it for its emissions scandal  behaviour as if it has done no wrong. At the very least, give up on ICE cars immediately and offer to put in a global network of free charging ststions for EVs so all can benefit.  Otherwise the company deserves to be put out of business, which would be a lesson to any corporation that is currently cheating and lying in such a way.

New in class technology and

And yet it will have less power and higher CO2 than my Toyota, on sale right now.

" Welsch confirmed the Golf will have the same floating light line leading to the new VW logo on the bonnet. That, too, will also be illuminated in countries outside of Europe, where it is illegal. "

Maybe Brexit will see the return of Wolesley?!?!