BACK TO ALL NEWS
Currently reading: New Vauxhall Vivaro-e electric van revealed with 188-mile range
UP NEXT
Tesla to expand select UK Superchargers to other electric vehicles

Vauxhall is accelerating its transition to a maker of EVs with the unveiling of the Vivaro-e, an electric version of its flagship van.

The British marque's first electric commercial vehicle will be built in Luton, on the same line as the diesel-engined Vivaro, and available to order from June.

Buyers can choose from two bodystyles: a full-length panel van or a double-cab version with two passenger rows. They can also specify a short or long wheelbase, with Vauxhall claiming a payload of up to 1226kg - only 130kg less than that of the conventionally fuelled Vivaro.

The Vivaro-e shares its 134bhp electric motor and 50kWh battery pack with the freshly launched Corsa-e supermini, making it capable of 125 miles per charge on the WLTP test cycle. An optional 75kWh pack extends the range to 188 miles, while regenerative braking features as standard. 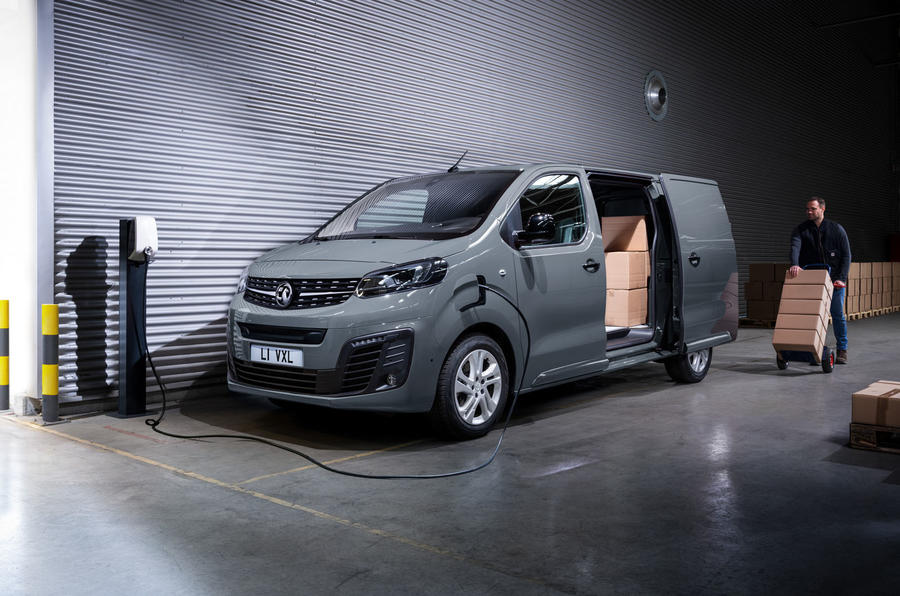 Charging the 50kWh pack from empty to 80% can be achieved in half an hour from a 100kW rapid-charger, while the 75kWh pack takes 45 minutes. A 74kW on-board charger is fitted as standard, but a three-phase 11kW unit can be equipped for faster charging times.

The Vivaro was designed with an electric variant in mind, so the packs are packaged under the cargo bay with minimal impact on load capacity. Vauxhall says this has the added benefit of lowering the van’s centre of gravity, thus ensuring stability even when it's fully loaded.

Vauxhall says the Vivaro-e is “the only electrified vehicle in its segment that has the ability to pull trailers”, claiming a maximum towing capacity of 1000kg.

The Vivaro-e is equipped as standard with the same array of driver aids and interior kit as the regular Vivaro. This means all versions feature a head-up display, lane-keeping assistance, traffic sign recognition, automatic emergency braking and a 7.0in infotainment touchscreen.

The electric van arrives as part of Vauxhall’s ambition to offer an electrified version of every one of its cars and commercial vehicles by 2024. It will be joined in dealerships by an electric version of the smaller Combo van in 2021.

In the real world

Of builders and the likes i simply do not see this working for them. My guess is True range when in work mode (full of materials) will be barely 50% that claimed at best. Maybe ok for short distance parcel deliveries and corporate fleets who are seeking to portray a PC image.

Great potential but what cost?

It’s great to see Vauxhall launching this model and confirmation that it will be built in the UK. Whilst the addition of an electric version is extremely welcome. I suspect that like the Nissan NV200, the e- version will be considerably more expensive than the diesel, both to buy and lease. Putting it out of reach to the average White van man, but great news for those able to afford the extra cost.

I really think the

I really think the electrification of vehicles on our roads should start with vans. Even when we arent locked down, every other vehicle out there seems to be a van delivering something, almost all running around our urban streets running on diesel. I hope the real world range, and cost are good enough to see these take over as the delivery vehicle of choice.