BACK TO ALL NEWS
Currently reading: New Toyota Corolla Cross compact SUV unveiled in Thailand
UP NEXT
Hyundai Ioniq 5 vs Skoda Enyaq: the best family EV for £40,000?

Toyota has further expanded its global SUV line-up with the launch of the new Corolla Cross. The compact model has gone on sale in Thailand and “will be launched in a growing number of other markets” in the future.

The new model is named after the long-running Corolla family car and is based on the same TNGA-C platform. Although the Corolla was recently reintroduced to the UK market, the firm declined to comment on whether the new SUV will be launched here. A spokesperson said: “We cannot confirm any introduction to Europe or other global markets.”

Toyota says the machine's development was based on the key phrase “Corolla meets SUV” and it has been designed to blend ‘sturdy’ SUV design cues with a smooth, quiet ride and “exceptional comfort”.

At 4460mm long, 1825mm wide and 1620mm tall, the Corolla Cross is marginally larger than the C-HR crossover that is sold in the UK, although its 487-litre boot is far bigger than the C-HR’s 377-litre version. The Corolla Cross uses a new torsion-beam suspension design that, Toyota says, has been developed to offer a “stable, cushioned ride”. 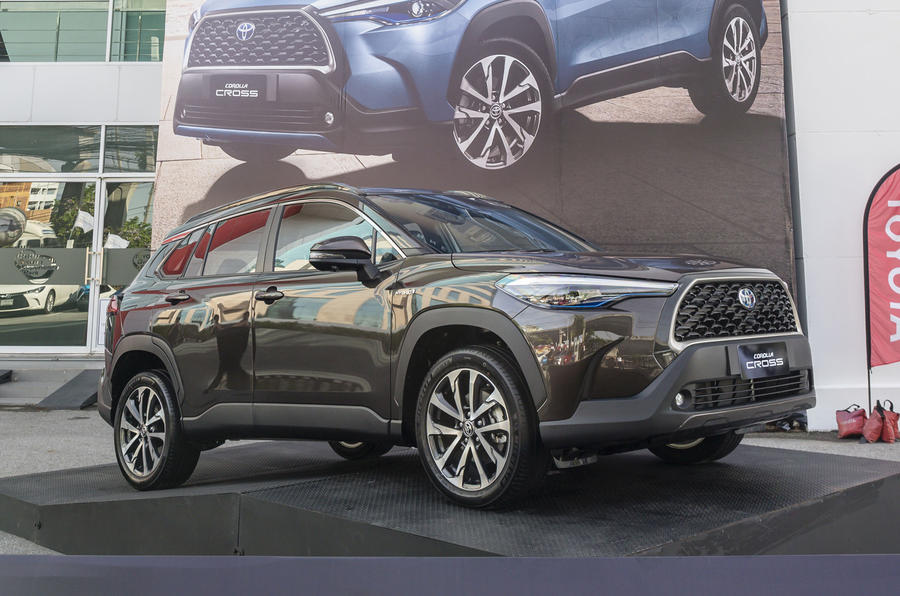 In Thailand, it will be offered with a 1.8-litre petrol-electric powertrain that provides a total of 121bhp and a regular 1.8-litre petrol unit producing 138bhp. Given the flexibility of Toyota’s TNGA platform, other units could be fitted in different markets, including the more powerful 1.8- and 2.0-litre hybrid systems offered in the UK.

The Corolla Cross is the second new Toyota SUV launched recently to take the name of one of the firm’s popular hatchbacks, following the Yaris Cross.

The Corolla Cross would fit into the hugely popular compact SUV market in the UK and build on the heritage of the nameplate, but it is unclear if there would be space for it in Toyota’s UK SUV range alongside the Yaris Cross, C-HR, RAV4, Highlander and Land Cruiser.

I'm no great fan of Crossover's and SUV's but it seems that the drivers have an insatiable appetite for these vehicles. Despite the success of the similar size C-HR I would guess there would still be some interest in another Toyota crossover. It would be more of a BMW X1 competitor whereas the C-HR is more in the X2 segment. With the closely related Corolla being built at Derby it would be great to see the Cross being built along side. The UK automotive industry desperately needs a boost.

They must be at the saki all day and night now... surely someone realises this vehicle has the ugliest face in the world !

They'll sell a few, but not to any discernin aesthete !

Toyota - you can do better (sic!) and you should