BACK TO ALL NEWS
Currently reading: New Skoda Vision IN is bespoke SUV for Indian market
UP NEXT
Hardcore BMW M4 CSL brings 542bhp, sheds 100kg

Kamiq-sized Skoda crossover is based on bespoke MQB-AO platform for India, and goes on sale in 2021
Open gallery
Close

Skoda has used the New Delhi Auto Expo to reveal a bespoke-to-India SUV concept called the Vision IN.

Set to enter production largely unchanged in early 2021, the new SUV is about the same size as the European market Kamiq. However, it is based on the VW Group’s locally produced MQB-A0-IN platform, itself specially adapted to the needs of the Indian market.

It is hoped that the small SUV will help Skoda increase its annual Indian sales almost eight-fold to 100,000, and its global sales figure to 2m by 2030, up from 1.24m currently. While a European launch is unlikely, Skoda is planning to export the Vision IN to other markets, with Mexico confirmed  first recipient.

It forms part of the ‘India 2.0’ project, in which Skoda - presumably deemed the most suitable of VW Group's brands for the market - is taking the lead. Both the Czech brand’s and VW brand’s operations were consolidated in India because doing so “enables coordinated, faster decision-making and increases efficiency by exploiting existing synergies”, therefore strengthening the Group’s position against the dominant Asian brands that make up much of the competition.

The Volkswagen Group is investing €1bn in Indian-market cars like the Skoda Vision IN and new Volkswagen Taigun, and plans for the two brands to attain a 5% domestic market share in the medium term. 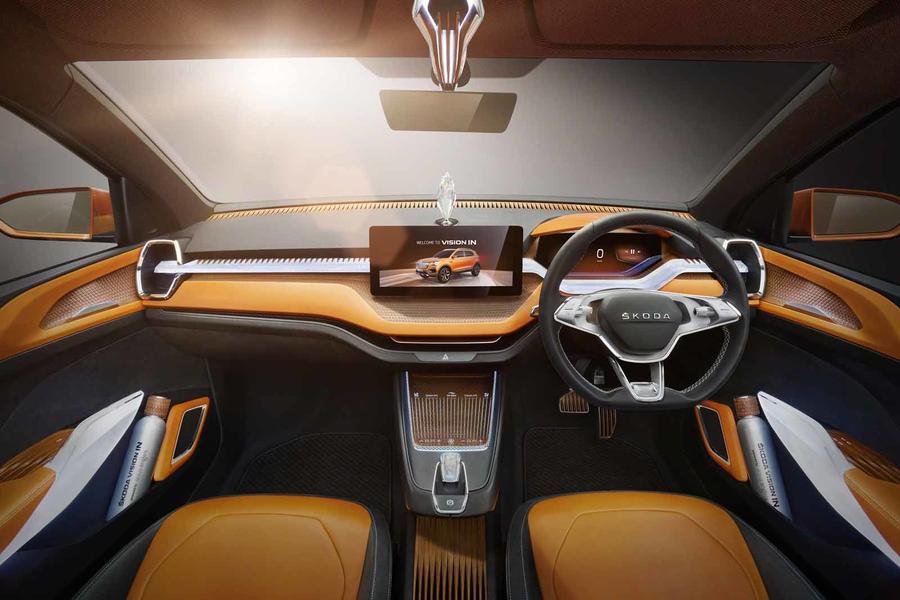 The Vision IN is said to combine “an optimum amount of space…the highest degree of versatility and state of the art technologies”. It features concept-esque design details such as an illuminated grille and flush-fitting door handles, which may be toned down for production. The model is likely to later spawn a coupé-style variant in the same vein as sibling brand Audi's new Q3 Sportback.

Skoda has used its supermini platform to create a practical compact crossover; we test the mid-level petrol engine

The other area likely to be altered by the time this car hits the roads is the interior. Said to feature “innovative vegan materials with traditional Indian design and Bohemian crystal glass art”, it gets Indian textile pattern wood trim inserts, and organic leather made from rhubarb, oak and waste pineapple leaves. Genuine crystal strips also feature inside, as does a “crystalline assistant” in the dashboard that is said to act “as a bridge to the digital world".

The Vision IN features a 1.5-litre TSI petrol engine mated to a seven-speed DSG gearbox: a combination that's expected to carry over to production. The brand says it can be electrified, but demand for electric models is not yet as strong in India as in other countries.

Like the new Volkswagen Taigun with which it shares a platform, the production version of the Vision IN will be built using 90% locally sourced components. Despite the Taigun being shown at the same time in production-ready form, the Vision IN will arrive in showrooms first. It will be sold in India with a six-year warranty.