The second-generation Nissan Qashqai, the model that defined the family crossover segment in its best-selling first-generation, has been officially revealed.

Designed in London, engineered in Cranfield and Barcelona and built in Sunderland, the new Qashqai will reach UK showrooms in February armed with a smart new exterior look, more fuel-efficient engines, and, perhaps most significantly, a much higher quality, more premium interior.

Despite the significant increase in quality and equipment levels, prices are set to start from only marginally above the £16,895 of today’s base model. Plush range-topping versions are set to cost around £27,000.

The first-generation Qashqai, built in Nissan’s Sunderland plant in the north east of England, has been the most successful model in Nissan Europe’s history, selling around 1.5m units in Europe since 2007 and 2m units worldwide.

“The first car had to make a real ‘wow’ when people saw it,” said Stewart Callegari, Nissan Europe’s product planning chief. “It needed a big impact, and it has done that. With the second generation, we’ve already made the segment and are the market leader. So rather than make one big wow with the car, we took a more mature approach and made a lot of improvements in small areas to appeal to a wider range of European customers.”

With the new Qashqai, Nissan’s main areas of focus were “enhancing the level of technology and design” and “improving the dynamic performance, while maintaining the package, price and size of the current car”, according to Callegari.

The new Qashqai broadly shares its proportions with its predecessor, growing slightly in length and width, but dropping slightly in height. The new car has a much sportier silhouette, but interior space is improved over the previous model.

“We were tempted to do radical again but more sensible to do what we’ve done,” said Darryl Scriven, the lead exterior designer of the car. “We have a huge customer base and have a responsibility to them - if we did radical we’d leave other brands to collect the successful elements we leave behind and our customers.”

More distinctive front and rear ends feature on the evolved look of the new car, along with more sculpted body sides. Front-end features include Nissan’s latest V-shaped grille, wraparound front headlights and a clamshell bonnet, while at the rear there’s an evolved version of Nissan’s ‘Boomerang’ rear lights.

It’s inside where the biggest improvement over the previous Qashqai lies. Higher quality, more premium materials are used in an interior that gets a completely new look.

“We had to improve on the premium element,” said Paul Ray, the interior design leader on the project. “Understanding all the products out there, they’ve caught us up and we want to lead again.”

The new Qashqai is the first European model to be based on the firm's Common Alliance Platform. By 2020, 11 Renault and 3 Nissan cars will be based on platform which will be produced in factories in 10 countries.

Top-spec models get leather and Alcantara trim to emphasise this premium feel of the new crossover, but the improvements extend to a greater use of soft-touch materials right down to the bottom of the range. The five-seat interior is also made more functional, with improved storage space and room for passengers, plus a bigger, more accessible boot.

Among the standard specification is expected to be air-conditioning, 16in alloy wheels, Bluetooth connectivity, and stop-start on all the engines. 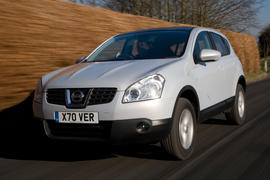 A six-speed manual gearbox is standard on all engines, with a CVT auto’ offered on the 1.6 dCi. Nissan is calling this CVT Xtronic.

“The new CVT gearbox aims to mix CVT smoothness with DCT connection,” according to Nissan engineer Mark Fowler. “We want to eliminate the rubber band feeling and noise under heavier throttle load, deliver a more connected feel, while maintaining the smoothness. There’s a ‘step shift’ feel to the shifts, like a normal auto’. We think we’ve really moved on the technology here.”

On the dynamic front, Nissan claims agility has been improved, while comfort has been retained. “We don’t want to make the best-handling car, we want to make one that appeals to the widest demographic by feeling more secure, more comfortable and more confident,” said Callegari.

A new Chassis Control system features, derived from the GT-R and said to give the function of a limited-slip differential. An Active Ride Control system is said to boost ride comfort. The equipment and technology levels on the Qashqai have also been significantly increased.

The Nissan Connect 2 infotainment system is offered, which includes sat-nav and a full suite of connectivity options. A whole host of safety technology is offered under the Nissan Safety Shield banner, including traffic sign recognition, automatic braking, moving object detection for parking, and park assist.

The seven-seat Qashqai +2 has been dropped from the range, effectively replaced by the new X-Trail, but Renault-Nissan boss Carlos Ghosn confirmed Nissan plans to launch a further five crossovers in the next 18 months.

Hyundai just called- they want their ix35 back.

From the rear and the side it's looks like a rip-off of the Hyundai ix35 and the Santa Fe. The front end is a blatant copy of the Kia Sorrento. UTTERLY SHAMELESS. But as they say, imitation is the best form of flattery.
Simplicity is key 10 November 2013

Another generic piece of toss... Nissan could try harder to create a solid design identity. The design language is like every other mainstream manufacturer at the moment. It's a bit of a mash up! Bits of BMW, peugeot and other stuff. Nissan please don't follow Lexus though... Ugly design isn't an identity.
Andrew Lee 9 November 2013

Did the Qashqai ever have the wow factor? I think not... Instead it had the supreme virtue (in marketing terms) of looking more expensive than it was. A sort of X3 on a budget. Whereas this seems to fall between two stools: it lacks the understatement of the existing model or the boldness - I'm being polite here - of the Juke.
View all comments (22)