Morgan's success with its 3 Wheeler is encouraging the company to contemplate expanding it into a range in its own right, according to chairman Charles Morgan.

The much-praised 2.0-litre V-twin model is likely to be joined by versions with different engines and body styles, just as the original 3 Wheeler was.

“The response to the 3 Wheeler has far exceeded our expectations, both in volume and youth appeal,” said Morgan. This year’s sales are expected to top 600 units, beating sales of the traditional 4/4, Plus 4 and Roadster.

The firm is deciding whether to continue making models on traditional steel chassis or to move to a single platform that could be used for traditional and modern cars. “There are strong financial arguments for both,” said Morgan.

The company is already part of the way down the one-chassis route. It currently uses the same Aston-like extruded aluminium chassis as the basis for its traditional-looking Plus 8 and progressive Aero models; the combined annual volume of which runs at 150 units. But the company also continues to make around 500 traditional models per year, about the same number as it was making before the Aero and 3 Wheeler were launched.

... so will we see a Morgan equivalent of the Asian tuk-tuk? Could be what austere Eurozone citizens need.

Meanwhile a 3 wheeler with weather protection might go down well with rain-soaked Britons.

I think it would look cool if they could design a sort of cockpit type arrangementm you could pretend you were flying a WW2 fighter!

The original three wheeler was also built as a four seater and a van. Can't see much demand for either of those but you could perhaps lengthen the car and fit a single fold out 'dickie' seat at the rear. Make it lockable and it would double as a boot, something the current car lacks. Better weather protection would definitely be an improvement. A short full-width screen rather than aeroscreens wouldn't spoil the looks. Like this: 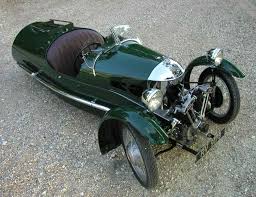 But the most obvious would be for Morgan to create a Three Wheeler Super Sports - their version of the Caterham Academy car - with an uprated engine and more track-focused chassis. Then what about a one make race series?

deciding whether to continue making models on traditional steel

I suspect replacing the traditional steel chassis for the 'traditional' models would be the beginning of the end for Morgan.

Building the Aero (and +8 for obvious reasons) as an additional model is fine but you ditch heritage at your peril as this is the very thing appealing about a Morgan.

From reading the review of the 3 Wheeler, Morgan seems to have put the "fun" into funtastic motoring and I'd love to try one out ... I only hope they don't get too successful and attract the hawk-eyes of the EC tree-huggers who seem to want to forever tighten up emissions and safety legislation until we end up driving around in oversized electric cotton wool balls ...

what the three-wheeler needs is a bubble canopy over the driver's side, and a hard tonneau over the passenger side. And maybe some sort of streamlined cover for the engine, so you feel like you've been transported back in time into a land speed record attempt. Drive up and down beaches all day.