BACK TO ALL NEWS
Currently reading: New BMW M5 revealed with 592bhp and four-wheel drive
UP NEXT
Hidden gems: A peak behind the scenes at Beaulieu

Sixth-generation M5 yet uses heavily revised twin-turbo 4.4-litre V8; it can reach 62mph in 3.4sec and tops out at 190mph
Open gallery
Close

BMW is billing its all-new M5, which adopts four-wheel drive for the first time, as the most powerful and quickest M5 yet.

The sixth-generation M5 will run a heavily revised 592bhp version of its predecessor’s twin-turbocharged 4.4-litre V8 engine in combination with a standard M xDrive four-wheel-drive system to deliver a claimed 0-62mph time of 3.4sec and a 190mph top speed.

The new M5 will go on sale in the UK priced from £89,640 in February next year. It was first revealed at the Gamescom video game show in Cologne, Germany, and is now on show at the Frankfurt motor show.

Based on the latest 5 Series, the M5 represents a decisive break from its predecessor, which first went on sale in 2011. Among the key innovations brought to the performance four-door is a new platform.

Insight: How the BMW M5 will make four-wheel drive count 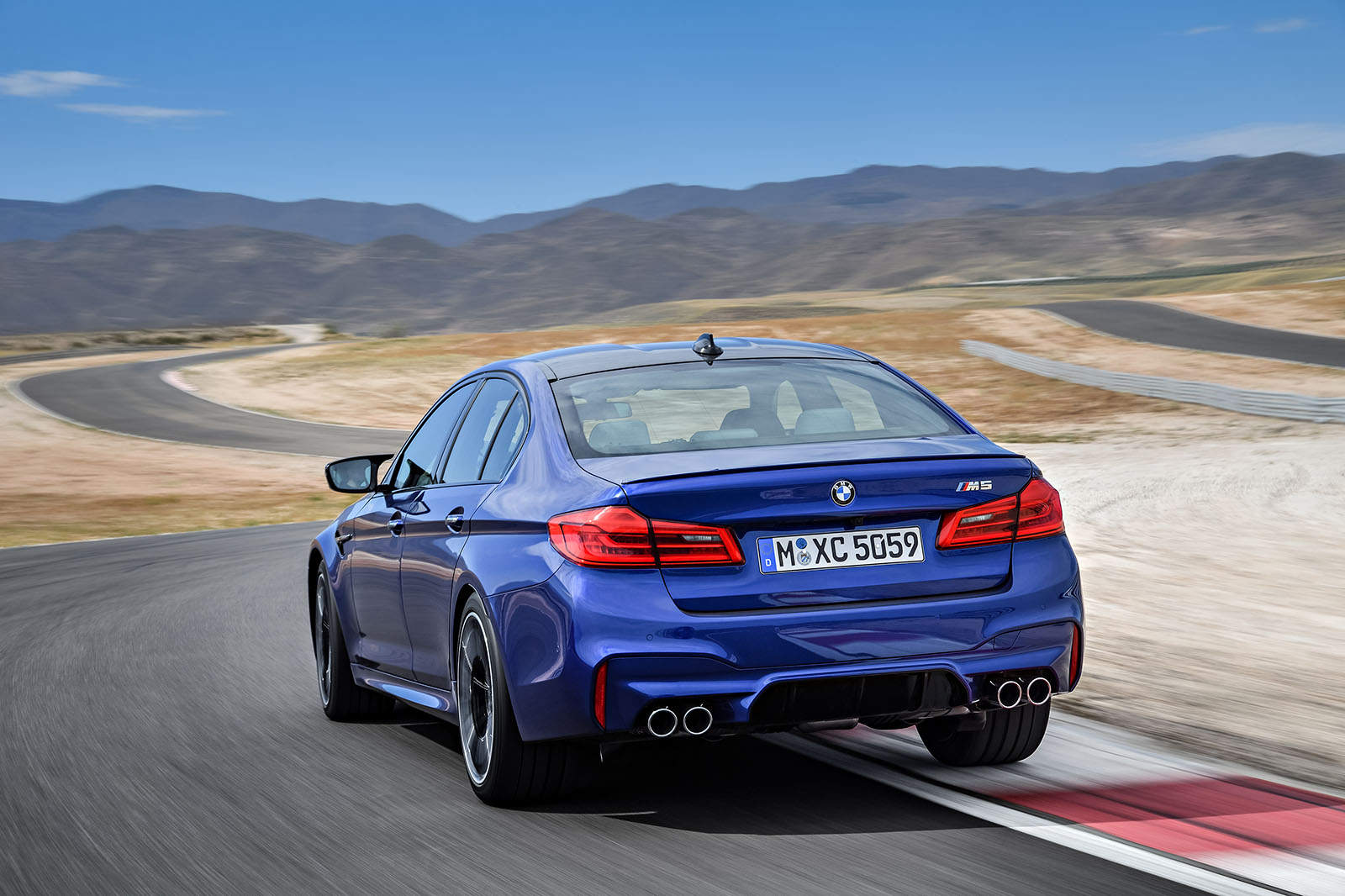 The CLAR (cluster architecture) structure, as it is known, endows the new M5 with a considerably more rigid, yet lighter, body than its predecessor’s. BMW’s M division claims it contributes to even more engaging driving traits than the outgoing F10- generation model, despite the adoption of four-wheel drive in place of the M5’s traditional rear-wheel drive.

M division boss Frank van Meel said: “Thanks to M xDrive, the new BMW M5 offers true rear-wheel-drive-like driving traits as well as significantly enhanced directional stability and controllability right up to the limits of performance, even when driving in adverse conditions such as in the wet or snow.”

Revealed as part of Electronic Art’s Need For Speed: Payback, a video game in which it stars, the new M5 is visually differentiated from standard 5 Series models by a range of customary BMW M division styling cues. These give it a muscular and familiar appearance.

Dimensionally, BMW’s new performance saloon is bigger than any other M5 before it Length grows by 55mm to 4965mm, width is up by 12mm to 1903mm and height has increased by 16mm to 1473mm. 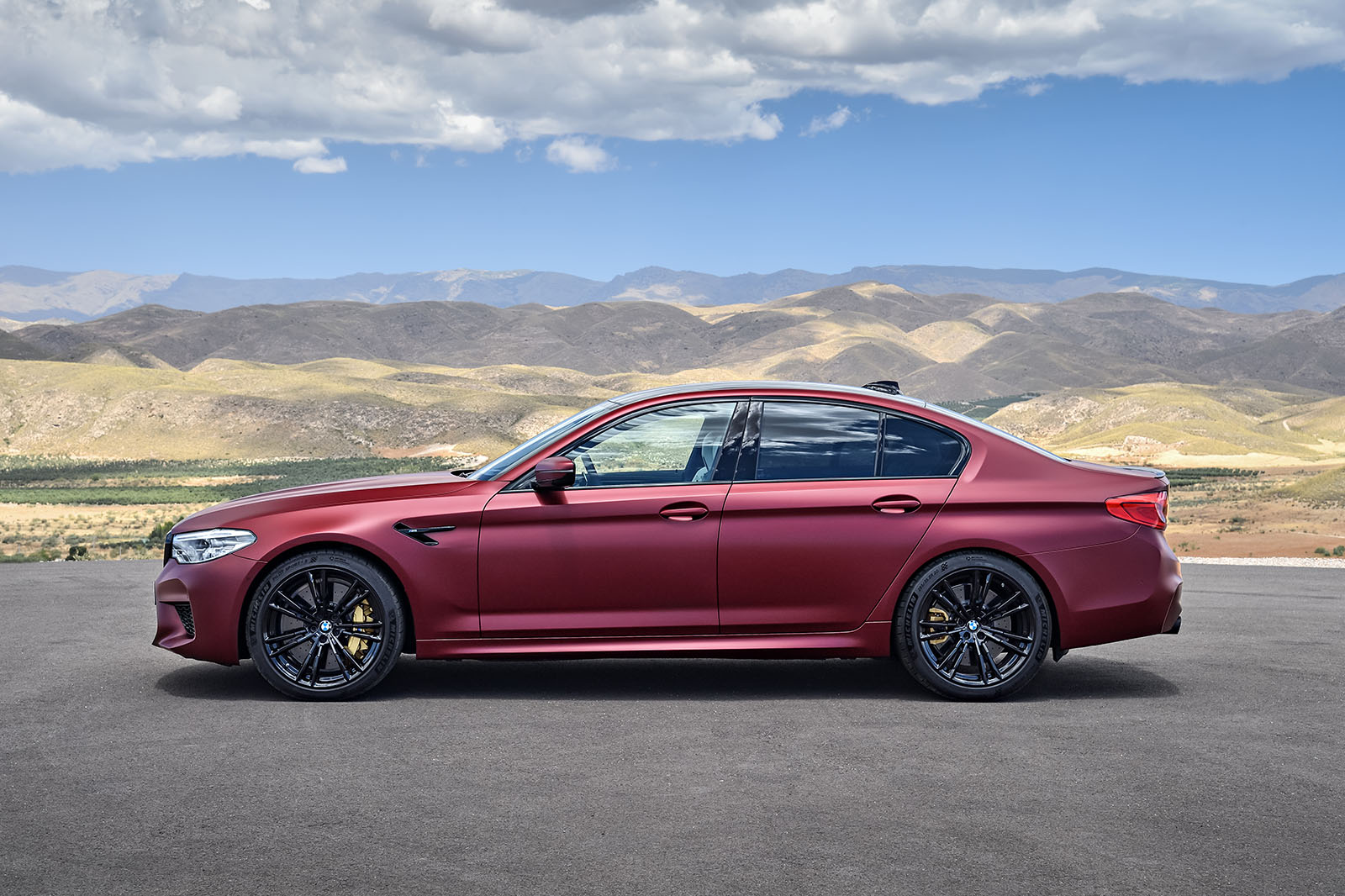 However, despite these increases and the adoption of four-wheel drive, BMW M has managed to reduce the kerb weight by 25kg over the fifth-generation model, at 1855kg. Weight-saving initiatives employed on the new M5 include an aluminium bonnet, carbonfibre roof, a boot-mounted lithium ion battery and what is described as “a lightweight exhaust system”.

One of the keys to the M5’s enduring success through the years has been its practical four-door layout and comparatively roomy interior. The new model continues this by offering seating for up to five people and a nominal 530 litres of luggage capacity. Inside, there is a new multi-function steering wheel, M-specific digital instruments and electrically adjustable seats.

In pictures: Autocar's history of the BMW M5

Mounted longitudinally up front, the engine used by the new M5 is a development of its forebear’s twin-turbo 4.4-litre V8. The direct-injection petrol unit receives new turbos, a revised intercooler, increased fuel-injection pressure of 350 bar and a new high-capacity oil pump.

Power is increased by 40bhp over the standard version of the previous M5, at 592bhp, and it is delivered some 400rpm lower than before at 5600rpm. This endows the new model with a powerto-weight ratio of 319bhp per tonne, which is 24bhp per tonne more than its predecessor. Torque is also up, by 51lb ft. A stout 553lb ft is developed over a wide, 3800rpm range between 1800rpm and 5600rpm. Additionally, the driver can choose between three modes — Efficient, Sport and Sport Plus — via a Drive Performance button. 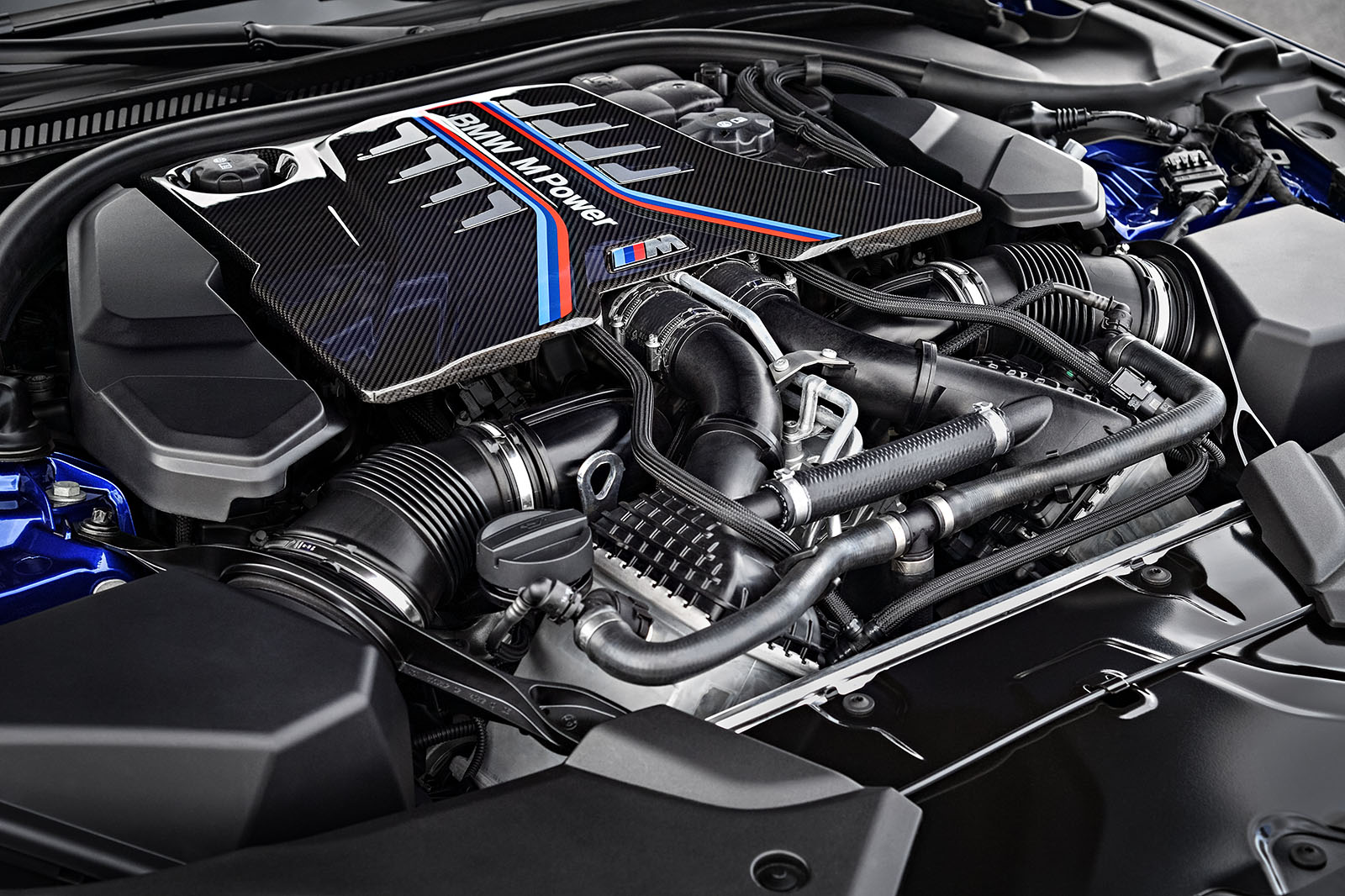 Although BMW is talking up the fuel economy of the M5’s revised engine, its combined cycle average of 26.9mpg and CO2 rating of 241g/km fail to better the claimed 28.5mpg and 232g/km of the old model.

The intensity of the exhaust note is controlled by a flap within the exhaust system and influenced by the different driving modes. An M Sound Control button allows the driver to reduce noise levels when desired.

The M5’s boosted reserves are channelled through a new eight-speed torque-converter automatic gearbox with remote steering-wheel-mounted shift paddles. A so-called Drivelogic software package provides it with three different driving modes as well as a full-manual mode for sequential shifting via a rocker switch located on the centre console. The ZF-engineered unit, which is combined with a 3.15:1 final drive ratio, replaces the Getrag-produced seven-speed dual-clutch unit used by the fifth-generation M5. 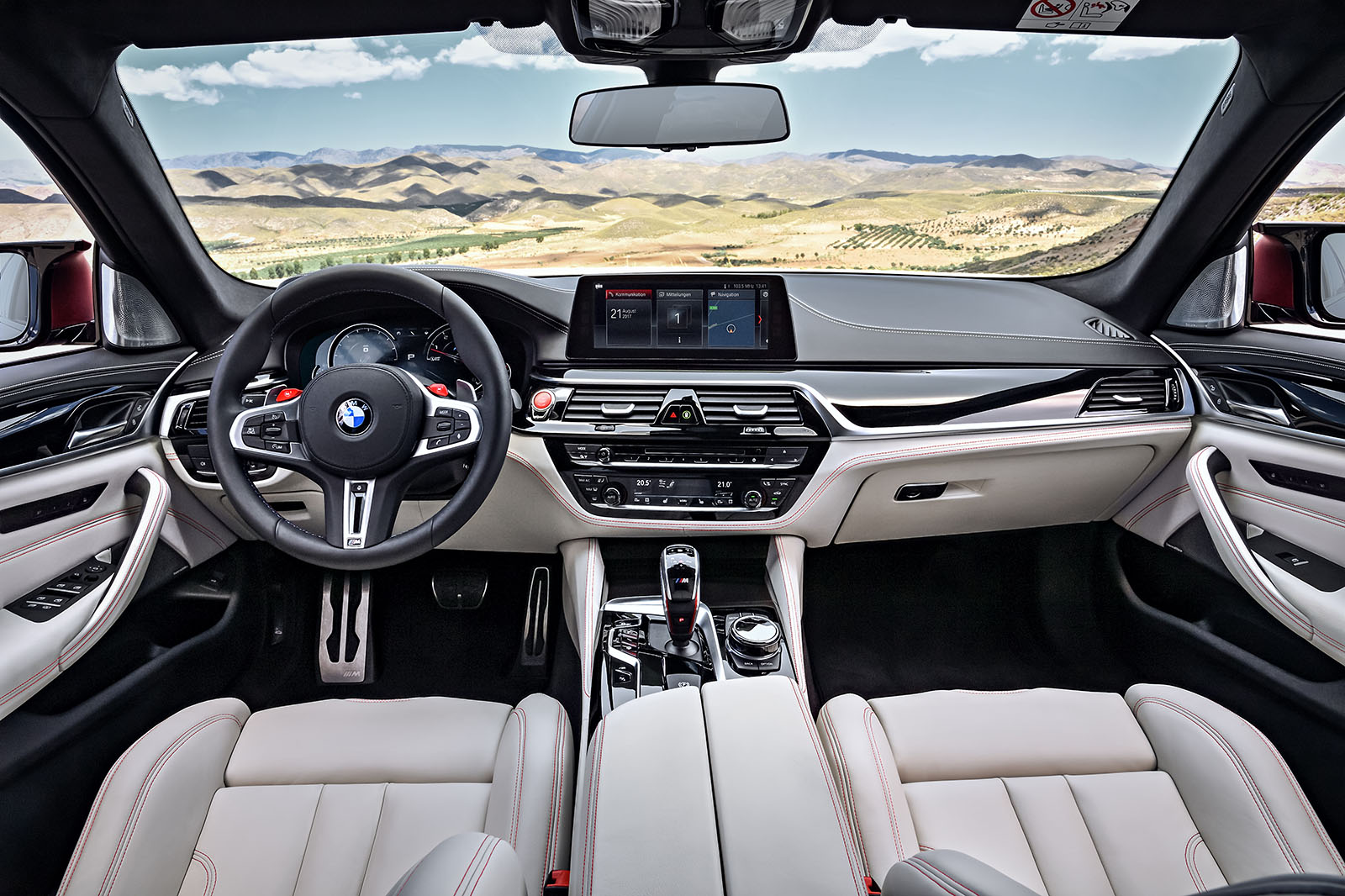 An even more significant departure for the M5, though, is the adoption of four-wheel drive — a first for the M5. Dubbed M xDrive, the hardware of the four-wheel-drive system is based around that used in standard 5 Series xDrive models and BMW M’s existing Active M differential. However, a sophisticated software system with proprietary code developed in-house by BMW M is claimed to ensure drive is sent to the front wheels only when the rear wheels are unable to transmit any more power to the road and additional traction is required.

The inclusion of M xDrive has allowed BMW M to offer a variety of different driving modes, the most aggressive of which, M Dynamic, permits pure rear-wheel drive in a process designed for track use.

BMW M’s decision to eschew traditional rear-wheel drive for the new M5 comes just over a year after Mercedes-AMG announced that the E63 would be offered exclusively with its own 4Matic four-wheel drive set-up. It also brings the M5 into line with the RS6, which has featured quattro four-wheel drive since its inception in 2002.

The added traction delivered by the new M xDrive four-wheel-drive system is reflected in the M5’s official 0-62mph time, which betters that of its rear-wheel-drive predecessor by a full 1.0sec, at just 3.4sec. This is the same time quoted by Mercedes-AMG for the E63 S 4Matic and beats the RS6 by 0.5sec. BMW M also claims a 0-124mph time of 11.1sec. 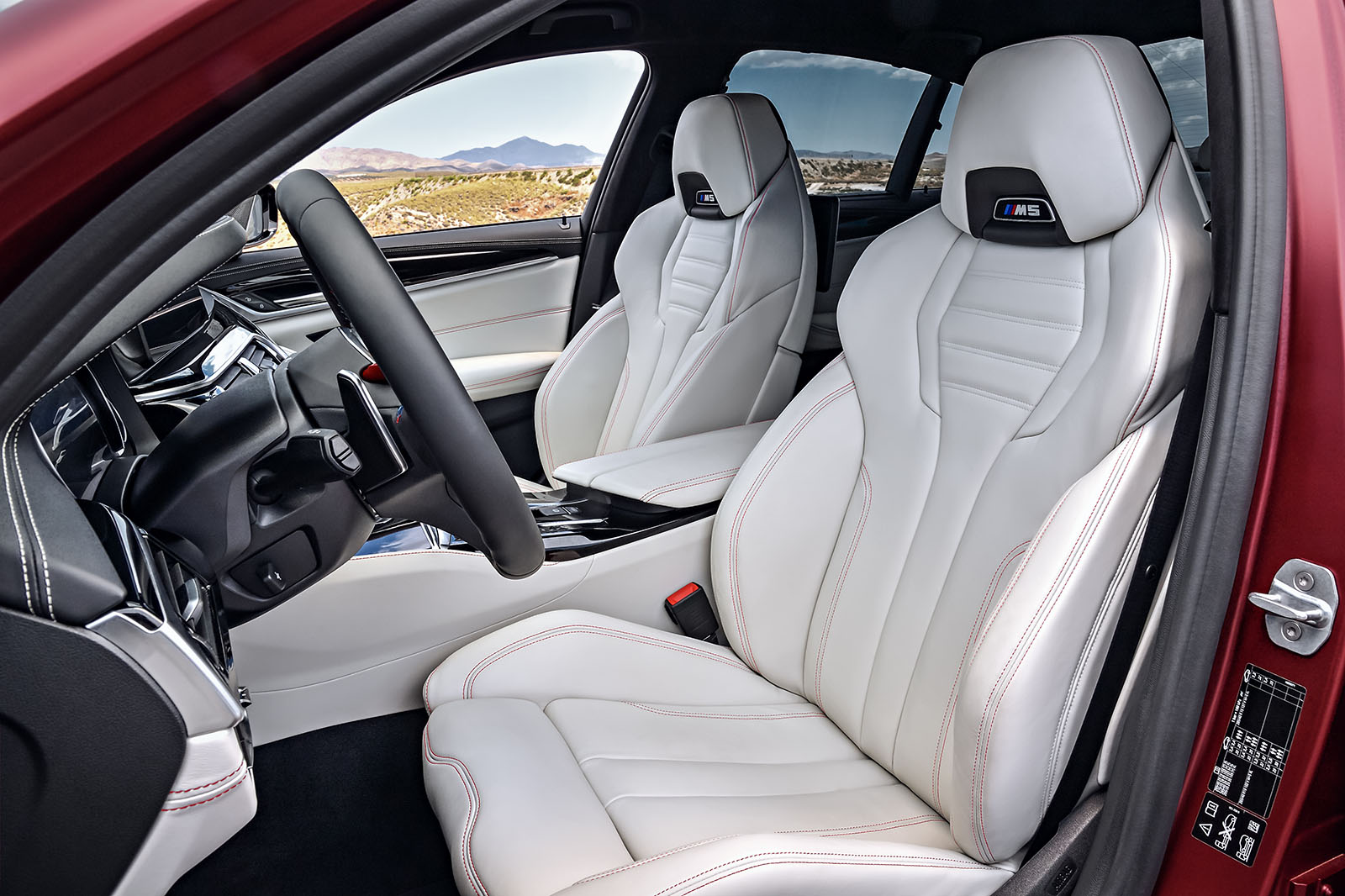 The nominal top speed of the new M5 is pegged at 155mph, although customers can have that raised to 190mph by specifying an option called the Driver’s Package.

The increase in straight-line performance helps to distance the new M5 from the recently introduced M550i xDrive, whose 456bhp version of BMW’s turbocharged 4.4-litre V8 engine propels it to 62mph from rest in 4.0sec and to a top speed of 155mph.

Underpinning BMW M’s latest model is a heavily modified version of the standard 5 Series’ double-wishbone front and five-link rear suspension, featuring bespoke components described as being “unique to the M5”. Among the more significant changes is the adoption of an additional brace and aluminium transverse struts at the rear to increase the stiffness of the suspension linkages. New wheel location has increased the wheelbase by 7mm over the M550i xDrive’s, at 2982mm, making it 18mm longer than the fifth-generation M5’s. Meanwhile, the front track has been increased by 26mm, at 1626mm, and the rear track is reduced by 2mm to 1595mm.

The tuning of the M5’s suspension has taken place predominantly at BMW’s Miramas test track in France and the Nürburgring in Germany. The new M5 will feature standard-fit 19in wheels shod with 275/40 front and 285/40 rear tyres or optional 20in rims with 275/35 front and 285/35 rear rubber.

There seems to be a lot of negative comments here!!

Sorry guys but there is a lot of complaining about this car, which is a shame. I for one can't wait for it to see it on the road. Audi and Mercedes have had 4 wheel drive for years and now so it is only natural that BM should launch an M car that has this option. In fact it can power just 2 and 4 wheel drive which will give its customers the flexibility to choose which they prefer and I am hearing is negative comments. I drive a M5 and have also had an M4 and Aston Vantage and the M5 is smoother faster and a far better ride. They have to keep pace with their competitors otherwise they will lose sales. In all the years I have driven BM's I have never had faults that have been mentioned and I keep my cars at least 4 years at a time and do over 20,000 miles a year. I like BM's and have had Audi's and Jag's in the past and the BMW is far the better brand.

​Wish I could afford one,still nice to have dreams .