The iconic BMW M5 is getting four-wheel drive for the first time, but the switch is to be celebrated rather than feared
Open gallery
Close

Before today's BMW M5 reveal, we had an early go in a protoype. Read on to find out what we thought...

The super saloon has clearly reached that point. The one that cars at the upper end of the hot hatchback class hit several years ago; that power and performance threshold that can only be passed by switching from one driven axle to two.

In a formerly front-driven, 1.5-tonne hot hatchback, it came at about 300-horsepower; for a rear-driven 1.9-tonne executive express car, it’s come at twice that. But it has certainly come.

Hot Audis have been that way all along. Alpina’s recently unveiled B5 is a four-wheel driver – and any SVR-badged Jaguar XF is sure to be that way too, in order to be in line with JLR’s stated vision for its performance sub-brand. 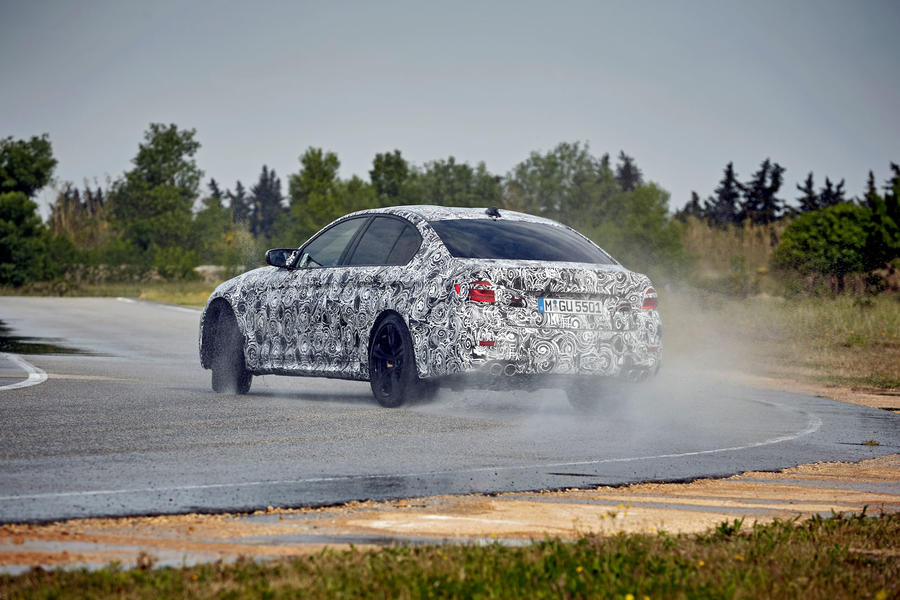 Time for new rules, then – at least at the very top of the bahn-stormer saloon tree: the inevitable response to what we might call a technological paradigm shift, if we wanted to get all highfaluting about it.

Over the next few years we’ll find out who will be able to execute the four-wheel drive super saloon the cleverest; who will best use the very latest drivetrain technology to broaden the versatility and reach of the breed without abandoning the handling purity and balance that’s been a primary pillar of their appeal for so long.

BMW’s M Division plainly thinks it’ll be them. For ‘M’, four-wheel drive is a sales and marketing necessity. North America remains BMW M’s biggest market by some distance, and having a four-wheel-drive M-car saloon option could dramatically improve sales there – not just on the eastern seaboard, but in California and elsewhere too, where customers are increasingly looking for performance cars they can continue to use during the winter months.

But sales success will remain important on this side of the pond as well, where attitudes towards a switch to four-wheel drive among BMW M’s core European customers may not quite be so receptive.

And so, as if to prove how little there may be to fear from the development, BMW invited us to its Miramas proving ground, which stretches over a 2000-acre site in southern France, for an early test drive in the sixth-generation M5. The car hasn’t even been shown at a motor show yet, and is still a while away from final engineering sign-off before a sales debut sometime in 2018.

But such is BMW M’s apparent confidence in the car’s new ‘M xDrive’ drivetrain technology, and its canny awareness of the need to start winning people over early to the idea of a four-wheel drive M5, that it rolled out a heavily disguised prototype, a few hours of track time and some obliging experts for us.

The next M5's new tech in detail

Up on a lift in one corner of an immaculate Miramas workshop, hovering just above head height, sits the new M5 – and underneath it, M Division Vice President of Engineering Dirk Hacker is pointing and explaining.

He’s covered the obvious bits already: the chain-driven clutch taking drive off to the front axle on demand; the rear differential developed from the one on the M3 and M4, which gets new carbon clutch blades for quicker and more precise torque vectoring; the new eight-speed torque converter gearbox (as light as the old 7-speed M-DCT, apparently); the new adaptive dampers (from ZF Sachs); the brakes (a choice of standard ‘compound’ iron discs with blue calipers or BMW M’s carbon-ceramic stoppers with gold calipers); and the wheels and tyres (19s with a choice of Yokohama or Continental rubber as standard, 20s on Michelins or Pirellis as an option, the latter getting a slightly wider section on the rear axle than on the front).

Then he turns to point at a small metal box about the size of a couple of decks of playing cards that’s housed immediately behind the offside front wheel on the left-hand-drive prototype we’re poring over.

“This is the real breakthrough,” he says. “This is what we call the Central Intelligence Unit. A chassis brain, if you like. It can overrule the individual ECUs for the stability control, the four-wheel drive system, the rear differential and the transmission to make sure every part of the car is working towards the same aim. This is the first time any M car has had a centralised controller with the power to control every sub-system governing lateral and longitudinal dynamics.”

The chassis brain is also the main reason why the new M5 can offer its driver so many driving modes, and such unparalleled mastery over exactly where the car sends its torque. 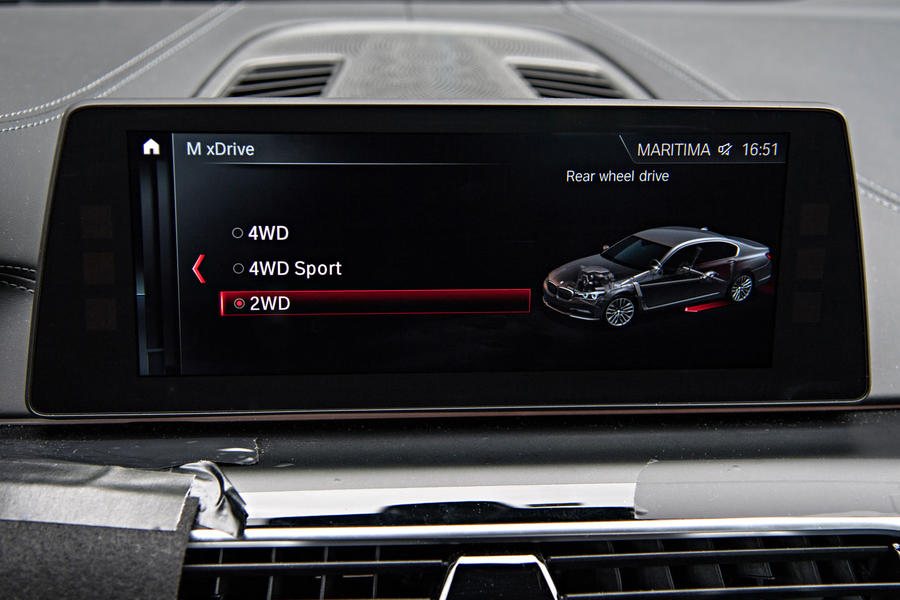 But turn the ‘DSC’ system off completely and the M5 offers a new sub-menu with a choice of three further drivetrain modes: 4WD, 4WD Sport and 2WD. In the former two, the driveline effectively takes over responsibility for stabilising the car during limit handling from the brake-based stability control system – the ‘4WD Sport’ mode apparently allowing plenty of slip angle and throttle-steer, should you want it, before gently transferring a share of the drive forwards.

In 2WD mode, you simply get established M car mechanical type: all the car’s torque sent rearwards and then funnelled between the individual rear wheels to create as driftable an M5 as ever there was. Or so they say.

The M5 has individual settings, too, for its steering, engine, suspension and gearbox shift speed – but unlike in the new Mercedes-AMG E63 S, it isn’t bothered how you combine them with that ‘2WD’ mode. You can have a comfy-riding, easy-steering, auto-shifting armchair skid-machine if you want to. And, frankly, I would.

It’s clearly too early to confirm performance claims or to talk finalised peak power & torque figures. For now, all the engineers will say is that they are working towards a car with “more than 600 horsepower” (615- is the number that’s quietly hinted at) and “significantly more than the current car’s 700Nm (516lb ft) of torque”. 0-62mph should take “less than 3.5sec”. The car would be about 65kg lighter than the last one, if not for the addition of the four-wheel drive system, which makes the difference marginal.

Behind the wheel of the BMW M5

We take to one of the proving ground’s dry handling tracks: a loop of tarmac about the same length and width as the one we use to set benchmark handling laptimes at the British Midlands’ MIRA proving ground, with a mix of tight 2nd gear corners and quicker 3rd and 4th gear bends. 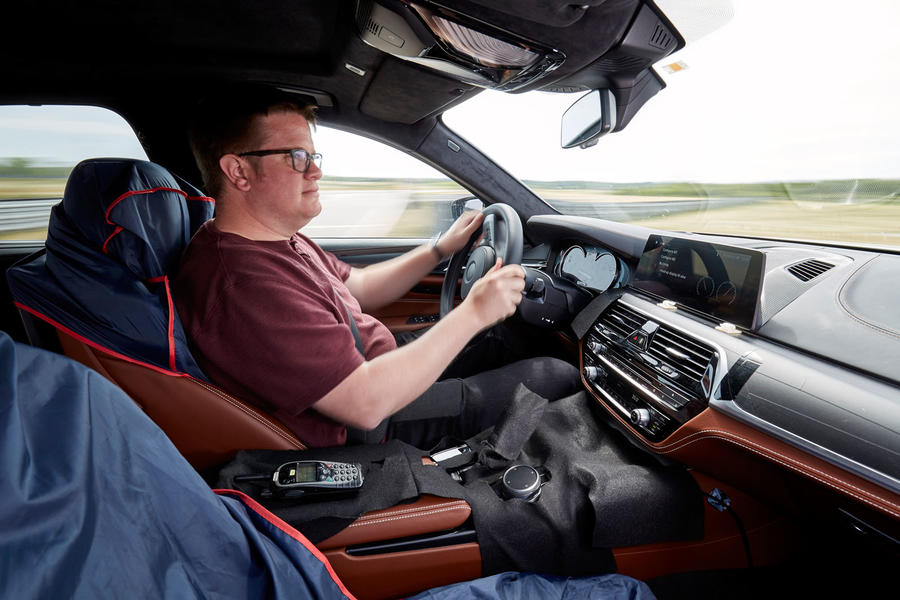 Whilst I’m getting used to the control weights, the grip level and the performance available, there a moment to note that a reasonable amount of criticism hasn’t persuaded BMW M to drop its ‘exhaust noise modulation’ strategy for this car. The M5’s engine isn’t the most characterful V8 but, as you dial up through ever-sportier modes on the car’s powertrain, you’ll notice it getting louder and slightly more synthesized-sounding.

That’s because the car’s playing an imitation exhaust barp at you. Because it’s only synthesized noise, of course, you don’t have put up with it when the car’s in comfort mode. Even so, it remains an annoyance – and a disappointment in my book. A proper M car should sound not only better, but authentic with it.

But the M5’s performance level is quite something. It takes a couple of laps until I’m comfy enough to use full power, while the car’s grip and response levels are becoming apparent – but when it comes, the big car really flies.

There’s the same slightly compliant, elastic feel to the power delivery as the ‘F10’-gen M5 has: not a sudden sledgehammer load of torque such as is delivered by the new E63, but instead a more progressive build-up and the need to keep that motor spinning above 3500rpm to feel it at its best.

Now, what handling mode is the car in? I engaged ‘M Dynamic’ mode on the stability control and ‘Sport+’ on the suspension and steering before we left the pitlane – but if you told me the car was already in one of its more agile, rear-drive-biased drivetrain settings, I wouldn’t argue.

It’s turning in fast and neatly, with better steering feedback than the last M5 had from the outset and great stability. But it’s also finely balanced mid-corner, sticking to its line and staying neutral in its attitude as we accelerate away from the apex. This is the M5’s standard mode; I haven’t even got as far as switching out the DSC yet.

When I do, the car’s handling poise, adjustability and involvement gradually progresses from very good to excellent. In ‘4WD’ mode the drive system allows little or no power-on understeer if you drive competently enough; you can slide the car just beyond neutral and, if you’re smooth and slight with your corrections, it’ll keep the lions share of torque at the rear wheels.

‘4WD Sport’ lets you be more aggressive on turn-in and then hold a good quarter-turn of corrective lock through the heart of a bend. Be any naughtier than that, or if the car changes direction more suddenly, and it’ll gradually feed enough drive forwards to help you gather things together neatly, rather than suddenly intervening and spoiling your fun.

After ‘4WD Sport’, ‘2WD’ mode actually feels a bit slow and untidy. The car’s handling is allowed to be more luridly sideways than the ‘F10’s ever was, and there’s no end of slip angle to be had anywhere you might be brave enough to dial it up.

But if anything, the relative shortage of traction available, and a slight untidiness in the car’s close body control as the lateral load in the car switches, together with a faint tendency for the rear differential to vector torque away from the loaded wheel just a little bit too abruptly at big drift angles, makes the M5 begin to feel a little bit rough and ready like this.

A 15-minute test on Miramas’ wet grip test track underlines the clear impression that the big M car is at its best in ‘4WD Sport’ mode: adjustable and entertaining but composed, precise, tractive and fast with it.

The car’s extra driven axle pours on the grip and stability smoothly and intelligently but only after your level of control over the car’s position and attitude on the track has begun to deteriorate - like the best stability control system a super saloon could ever have.

Is it possible that a four-wheel drive BMW M5 could handle even better than a rear-driven one? It’s very early days for pronouncements like that – but on this evidence, it seems we really can believe it. 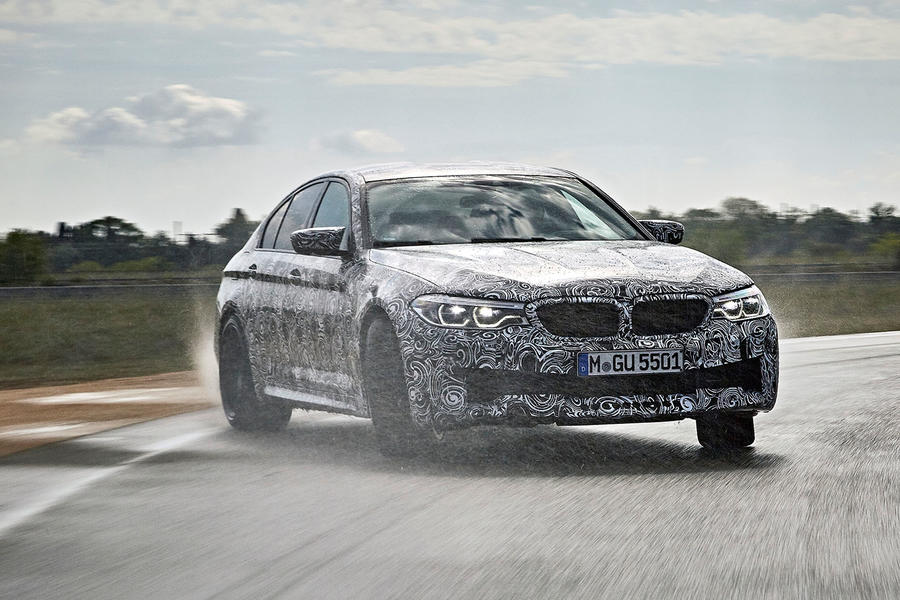 The current m 5 was either too boring or too scary for me. It either felt like a 520 or it spun the wheels in any gear in the wet. Im not a good enough driver to cope without 4wd at these power levels in anything above comfort mode so 4wd is welcome as far as i am concerned
tomy90 17 May 2017

Was bound to happen

Considering the power levels involved it is getting harder to put that power down in a manner that is controllable for an everyday car that costs below £100k. I just hope BMW do not abandon RWD from the rest of the M-Range.
HHX621 17 May 2017

In a new super car could be something 2 lust 4!
View all comments (5)