BACK TO ALL NEWS
Currently reading: New BMW 4 Series Convertible drops disguise ahead of unveiling
UP NEXT
Buy them before we do: second-hand picks for 24 September

BMW will soon follow up the launch of the 4 Series coupé with a new convertible version – and the latest spy shots show the model with barely any disguise.

Seen in a compound at one of the Munich brand's development facilities alongside other disguised mules, the drop-top is, as expected, close to the hard-top in terms of its body design. It'll be the smallest four-seat convertible model BMW makes because the next-generation 2 Series will come in coupé and four-door forms only.

With the current 2 Series and new 8 Series Convertible adopting a cloth roof, it’s not a huge surprise that BMW has elected to ditch the folding metal roof for the second generation of the 4 Series. The decision also brings the car in line with its closest rivals: the Audi A5 and Mercedes C-Class cabriolets.

Doing so reduces the complexity of engineering and producing an intricate folding hard-top system and is likely to improve the long-term reliability that complicated folding hard-tops are often criticised for lacking. 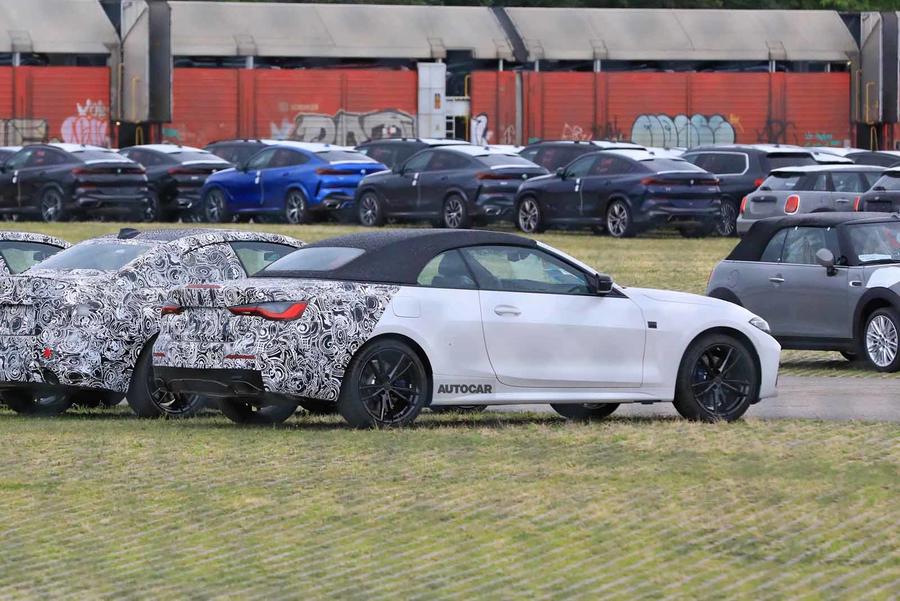 The move will also reduce the car’s kerb weight, aiding handling, performance and fuel efficiency. Expect the new convertible to be less than 100kg heavier than the coupé. With less mass to store underneath the bootlid when the roof is down, improvements in rear seat and luggage room are possible, too.

The new 4 Series revealed a bold and controversial front-end styling direction for BMW last month. It also introduced a new aluminium-intensive platform, a wider and longer body with a wheelbase matching that of the 3 Series saloon, and the latest array of technology.

As before, we'll also see a four-door Gran Coupé version of the hard-top 4 Series, and as part of BMW's ongoing electrification ramp-up, an all-electric version of the Gran Coupé, called the i4, will also arrive next year.

Yes, it’s a neat tidy fit, I’m just not sure the rear window is the final design, it’s an odd shape....