Audi's all-electric E-tron GT has been spotted in the closest disguised shots yet ahead of an expected production debut at the 2020 Los Angeles motor show.

The EV grand tourer, a sibling to the Porsche Taycan, isn't set to hit showrooms until early 2021 after the unveiling. While the physical LA show itself hangs in the balance due to the coronavirus pandemic, the new model should still be unveiled then.

It appears that the design of the original 2018 concept will be largely retained for production, with the camouflaged test mues sharing the same lines and proportions. Notable differences include the presence of door handles, which were absent on the concept. 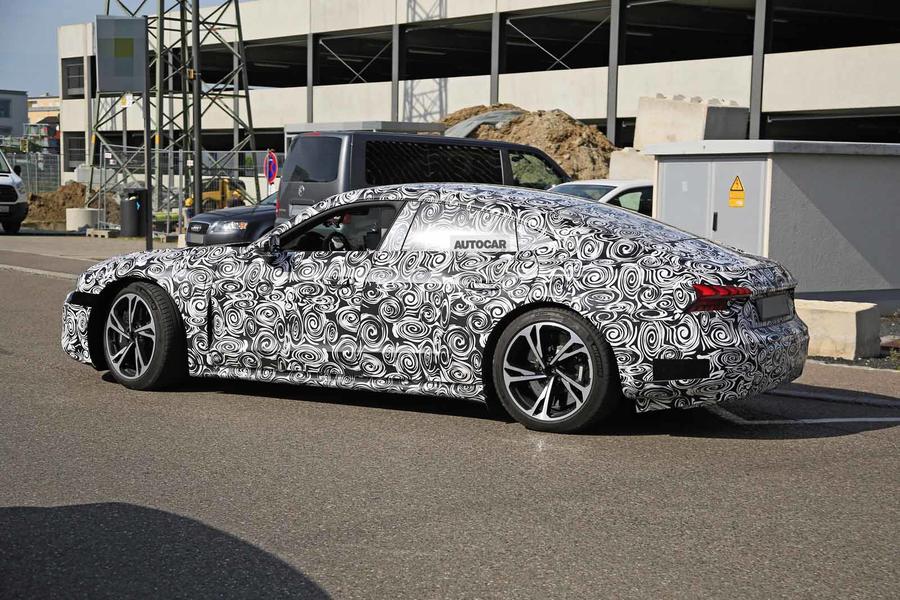 Although the interior has yet to be pictured in detail, it is largely expected to match the concept's layout, complete with digital cockpit and driver-oriented infotainment display.

The finished car is expected to arrive with a 96kWh battery that will be capable of 248 miles of electric range on the WLTP test cycle, while 350kW charging should make an 80% fast charge take as little as 20 minutes. With the battery occupying the entire underfloor area between the front and rear axles, it's set to have a centre of gravity comparable with Audi's R8 supercar.

The concept version of the E-tron GT has a synchronous motor on each axle to produce a combined 582bhp and is capable of 0-62mph in 3.5sec and a 149mph top speed. All-wheel steering and torque-vectoring quattro permanent all-wheel drive should deliver "sports car-like agility and precision", according to Audi.

The production version is set to be built at Audi's Böllinger Höfe facility, where it currently produces the R8. The E-tron GT will almost certainly undercut the Porsche Taycan on which it is based, which starts from £83,000 in the UK.

Yep, trad Audi, no real imagination, I wish they would just get a bit more adventurous with the shape,and the interior will be standard stuff, solid built, but plasticky looking, shiny,not look the money.

248 miles range is really poor... With a battery this size you ought to do at least 350. The BMW i4 is promising 370 with a smaller battery. Not even mentioning you know who who is targeting 400 soon. The all VAG group seems to be struggling with its electric cars which is not so good when you consider how much they've put in it.
Nickktod 11 March 2020

...I realise they are only "inveiling" their "test mues" at the moment, but given it seems to have an identical mechanical (electrical?) package to its £83k Taycan 4S sister car, I suspect its pretty unlikely to be £100k.