BACK TO ALL NEWS
Currently reading: New Alpina XB7 revealed with 613bhp and 180mph top speed
UP NEXT
How the Bugatti Chiron became the first 300mph road car

German performance brand Alpina has revealed the new XB7 as an upgraded version of BMW's flagship SUV, the X7.

Powered by an uprated version of the twin-turbocharged 4.4-litre petrol V8 found in the top-rung BMW X7 M50i, the new Alpina XB7 produces 613bhp - 90bhp more than the standard car - and 590lb ft of torque, making it the most powerful model in Alpina’s line-up.

The power boost means the XB7, weighing in at 2655kg, can cover the 0-62mph sprint in just 4.2sec and reach an electronically limited top speed of 180mph - both improvements over the X7 M50i. 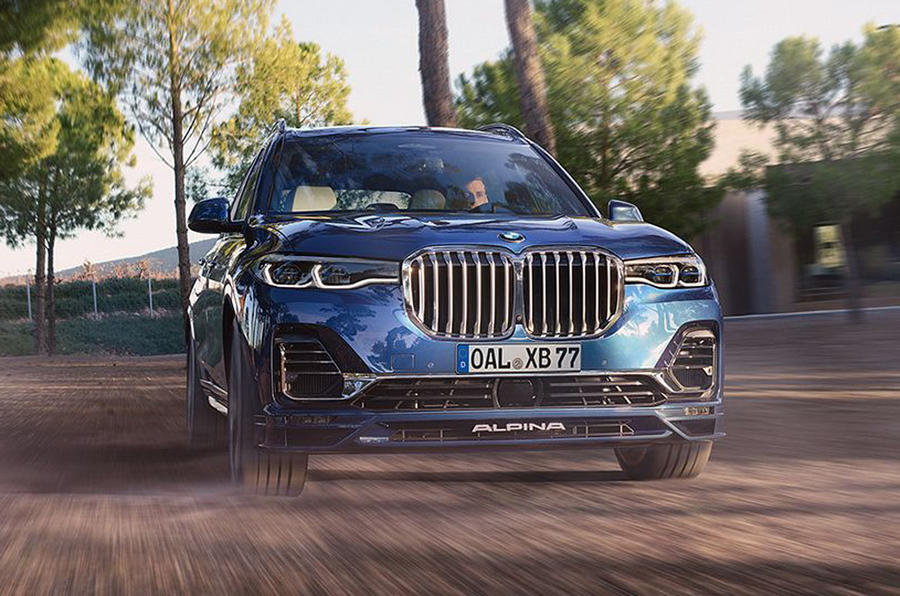 The air suspension system allows for different ride heights and wheel camber settings to suit different driving scenarios. In Sport mode and at speeds above 100mph, the ride height is lowered 20mm, with Sport+ taking the car down a full 40mm from its standard setting.

The XB7 is told apart from the X7 by its  new front splitter with larger-than-standard air intakes and a reshaped rear bumper that houses four exhaust outlets and a subtle new diffuser. Alpina badges to the front and rear, blue Brembo brake callipers and bespoke wheel centre caps finish off the package.

As standard, the XB7 sits atop a set of 21in five-spoke alloy wheels, but an optional set of 23in forged alloy wheels, designed in Alpina’s characteristic 20-spoke pattern, are available and can be optionally finished in Anthracite Grey. The wheels shave 12.7kg from the SUV’s kerb weight and come wrapped in tyres developed specifically for the car by Pirelli.

The interior - which can be specified in six- or seven-seat formats - is largely identical to that of the standard X7, save for subtle details such as a glass iDrive rotary controller, a sports-style steering wheel and Alpina logos throughout. A three-part panoramic sunroof, soft-close doors, and an Alcantara headliner are equipped as standard, although a range of optional upgrades - including an LED ceiling display offering more than 15,000 light patterns - will be available.

UK pricing and specifications are yet to be revealed, but the XB7 is available to order in Germany now from €155,000, suggesting it will likely cost upwards of £140,000 when it arrives here later this year. 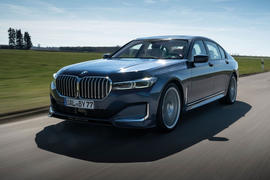 Alpina's latest take on the 7 Series packs more performance than a limousine could ever need, but how does it handle?

And some people thought BEVs were heavy. Stupid car for so many reasons, hope they struggle to sell 1

And some people thought BEVs were heavy. Stupid car for so many reasons, hope they struggle to sell 1

I agree, what's extra insane is that this 2600kg+ £140k+ 600ps+panzerwagen will pay around the same road tax and luxury purchase tax as a tiny 1100kg Alpine A110 Sunday sportscar ...ridiculous,

Cars over 2 tons and 100k should pay a surcharge especially since they destroy the roads .

Even more insane is that a 100k 2500kg+ million horsepower tesla model x pays no ved, no luxury car surcharge, no London congestion charging, free parking permits in some areas and has amazing bik deals for business users. Looks like the elite don't pay tax because all of the loopholes benefits them greatly, only the dumb plebs pay! Thank you Bojo(!)

But I think it could do with a more distinctive grill: perhaps a larger one? Oh, and 24" wheels.

And, before you say it, Takeitslowly, I am a twat. Whatever that is.

They will buy it in droves. The brave new world isnt going to happen because of Covid.

Not sure either re its

Not sure either re its