Mercedes-AMG is developing the second-generation GT with an 800bhp-plus plug-in hybrid drivetrain – and the first prototypes of the petrol-electric super-coupé have been spied testing on the Nürburgring.

Mercedes-AMG is remaining tight-lipped on details of the new GT model, though its drivetrain is set to draw heavily on that of the GT 63 S E Performance 4Matic 4-Door with a front-mounted twin-turbocharged 4.0-litre V8 petrol engine and an electric motor sited within the rear axle assembly in combination with a 6.1kWh battery pack.

It remains to be seen whether the two-door coupé will receive the same 831bhp and 1082lb ft as its five-door liftback sibling, though the new range-topping GT model does appear certain to adopt AMG’s fully variable 4Matic+ four-wheel drive system, which is not offered on the existing rear-driven first-generation model.

In the GT 63 E Performance 4Matic 4-Door, the electric motor is tuned to deliver a maximum 201bhp for short bursts of full throttle acceleration, with a milder 94bhp of continuous electric drive available with sufficient battery energy reserves.  The overall electric range is put at 7.5 miles. 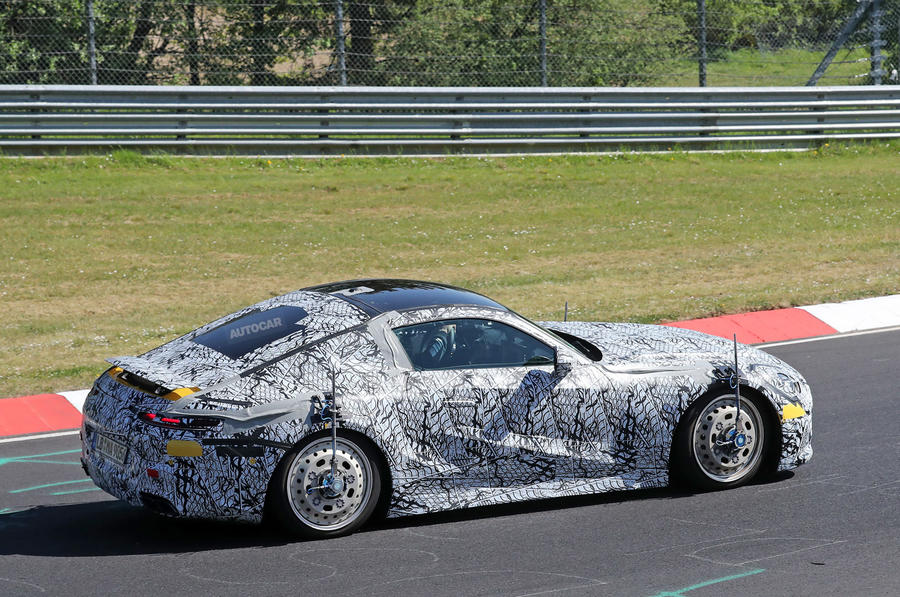 The so-called P3 system developed by Mercedes-AMG sees the reserves of the combustion engine channelled through a nine-speed MCT Speedshift automatic gearbox to all four wheels. The electric motor, meanwhile, sends drive through a two-speed gearbox directly to the rear wheels.

Overall, the packaging of the electric motor, battery and power electronics add 460kg to the weight of the standard GT 63 S 4Matic 4-Door. Despite the added weight, it is claimed to hit 62mph in just 2.9sec and reach a top speed limited to 190mph.

The open-top SL and fixed-roof GT both share the platform, body structure and other components, ensuring the cost of development can largely be shared between the two. The key giveaway to the new GT model is the charging port located within the upper-right-hand section of the rear bumper of the prototype seen here. As with the GT 63 S E Performance, it is expected to allow charging at up to 3.6kW on an AC system.

Standard versions of the upcoming second-generation GT are set to run an updated version of the existing first-generation model’s twin-turbocharged 4.0-litre V8 engine, the M177 as it is codenamed. In the recently introduced SL 63 4Matic+, it develops 577bhp and 590lb ft of torque.

1082 lb/ft, isn't this just another power race?, forty years ago 500bhp was a fast Supercar, today?, some of the top hatchbacks have that, four figure torque?, what's the point?

Anton motorhead 13 May 2022
Aah, just the kind of car we need, but hey what is that 190mph limit supposed to mean? I need at least 204mph to have fun ripping up and down the M1. Come on MB!! Really, is this kind of car interesting? Apparently some think so or MB wouldn't make it. As for me, I'd rather have an M240i which is still plenty fast.