BACK TO ALL NEWS
Currently reading: New 2023 Ford Mustang to be revealed in September
UP NEXT
New 2023 Porsche 911 GT3 RS is "most track-focused" ever

New 2023 Ford Mustang to be revealed in September

The seven-generation of the iconic Ford Mustang will be unveiled in September, and is set to undergo the most radical reinvention in its 58-year history.

The sports coupé, which wears one of the longest-running (and historically best-selling) nameplates of any car currently on sale, will be shown for the first time at the North American International Auto Show in Detroit on 14 September.

Seen before as a camouflage-clad prototype, it’s clear that Ford will seek to evolve, rather than overhaul, the Mustang’s characteristic cab-backward silhouette and muscular design cues.

Visible details include new lights at the front and rear and a sharper front grille, but it will be the changes underneath the skin that most tangibly differentiate the Mk7 Mustang from its predecessor.

As previously reported by Autocar, Ford is expected to bring the Mustang into the electrified era with a new petrol-electric drivetrain centred around its trademark V8 petrol engine.

To be sold alongside the new all-electric Ford Mustang Mach-E SUV, the S650-generation Mustang is expected to retain the current car’s 5.0-litre naturally aspirated Coyote V8, but this time with a pair of electric motors installed for reduced emissions, increased power and zero-emissions running capability.

The new drivetrain layout was alluded to in patent filings in 2017, when launching a hybrid Mustang was a higher priority for Ford than the all-electric Mach-E.

Essentially, the Mustang is set to become four-wheel-drive, with the rear axle powered by the V8 and the two electric motors used to drive the front wheels – either independently in EV mode or alongside the petrol motor in dynamic driving situations.

According to the patent, each of the motors would drive its own wheel through a respective reduction gearbox, forming part of a four-wheel-drive system that would “increase wheel traction with a ground surface on which the vehicle sits to increase acceleration and decrease wheel slippage”. 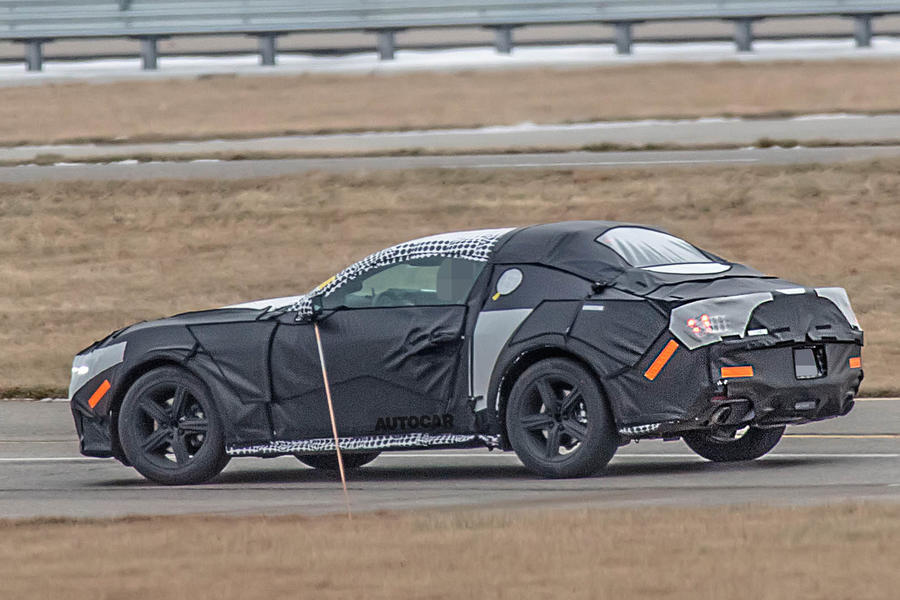 The 'pancake' motors in this scenario wouldn't be "rotationally coupled to the engine", according to the patent filing.

Power would come from an integrated starter-generator (similar to in a conventional mild hybrid drivetrain), which would itself be powered by the V8's crankshaft, doing away with the need for a weighty and space-consuming traction battery.

Mounting the EV motors directly to opposing sides of the engine's oil pan would save space, according to the patent filing, and allow for each to operate independently, thereby offering torque-vectoring across the front axle.

A Ford spokesman declined to give further details of the S650 Mustang at this stage but said that the model will continue to form part of Ford’s European product plan.

It remains unclear whether this powerplant could return in conjunction with a hybrid system, but Ford’s patent applies to V-shaped engines.

Camouflage does its job, I'll be surprised if it is vastly different looking,and Ford are only joining the Herd to have Phev and EV Cars on sale.

Hardly joining the herd when the electric propulsion will be required for the car to be competitive tax wise and look affordable mpg wise to be sold in alot of markets. Will also help reduce Ford's average CO2 figure in certain markets which could be the difference between them being able to actually sell the car or not in certain places.

To me that car looks like the convertible version. A lot of cladding over the top of the screen and the rear roofline. Eitherway a V8 with electric assist will be welcome.