BACK TO ALL NEWS
Currently reading: New 2022 Vauxhall Astra arrives on sale at £23,275
UP NEXT
Fisker goes radical with Pear EV SUV

The all-new Vauxhall Astra is now available to order in the UK from £23,275, and is the first model from Vauxhall to be offered in a new range of trims.

All Vauxhall models will now be sold in three trim levels, Design, GS Line and Ultimate, which the brand said will make it easier "for consumers to pick the model that best suits their needs". Other models will follow suit from next year onwards.

The entry-level Astra Design gets 16in alloys, LED lights at each end, a pair of 10.0in screens with smartphone mirroring functionality and rear parking sensors, while "sportier" GS Line adds 17in black wheels, a contrasting roof, privacy glass and enhanced driver assist package for £26,710.

Deliveries of the initial petrol, diesel and plug-in hybrid cars will begin in the first quarter of 2022, with the pure-electric Astra-e following in 2023 to join the Vauxhall Corsa-e, Mokka-e, Combo-e Life and Vivaro-e Life in the brand's swelling line-up of passenger EVs. Along with German sister brand Opel, Vauxhall will have an entirely electric product range from 2028.

Details remain thin on the ground, but the Astra-e will likely share elements of its drivetrain with the electric versions of the Combo and Vivaro, which also use Stellantis' modular EMP2 architecture. However, given its launch is three years away and the new Astra has a more overtly premium focus than those models, it is likely to improve upon their 134bhp output and 174-mile maximum range.

The Mk8 Astra is the penultimate model in the Vauxhall line-up to move across to a platform developed by parent company Stellantis. It leaves the Insignia saloon as the sole remaining Vauxhall model to still use General Motors-developed mechanicals. The new Astra’s EMP2 architecture is also used by a variety of models from Vauxhall’s sibling brands, including the near-mechanically identical third-generation Peugeot 308.

This means the Astra, like the 308, is now available with a choice of two PHEV powertrains alongside a more conventional range of petrol and diesel motors. 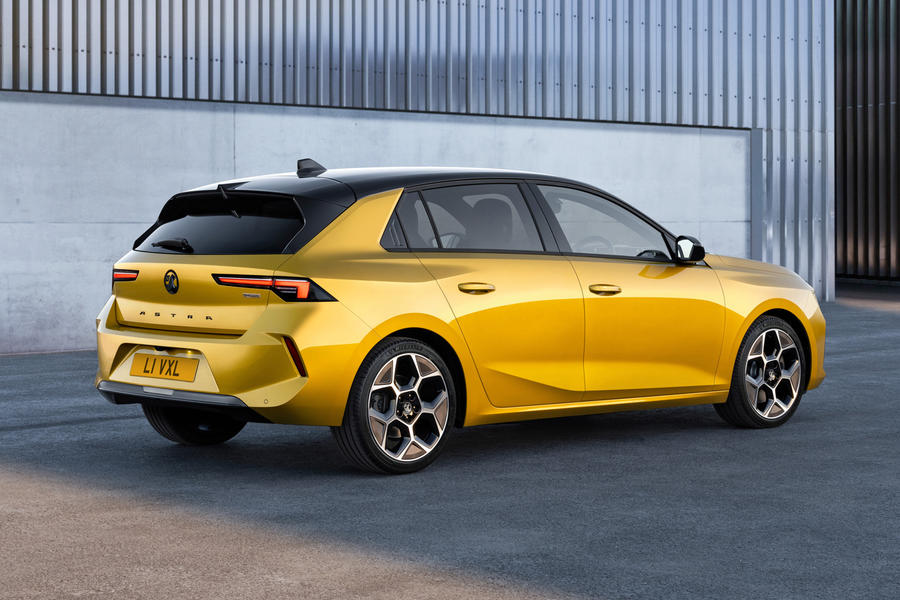 Each PHEV option mates a 1.6-litre four-cylinder turbocharged petrol engine, with either 148bhp or 178bhp, to a 109bhp electric motor in the eight-speed automatic gearbox for combined outputs of 178bhp and 222bhp respectively. A 12.4kWh lithium ion battery supplies an EV range of around 35 miles and can be charged in less than two hours courtesy of a 7.4kW on-board charger.

Non-electrified engine options comprise a 1.2-litre petrol turbo triple with either 108bhp or 128bhp, and a turbocharged four-cylinder diesel with 128bhp. Each is paired as standard with a six-speed manual gearbox, but an eight-speed auto is an option.

In terms of design, the newest iteration of the hatchback most obviously moves away from its forebear in adopting Vauxhall’s new ‘Vizor’ front end, as seen on the latest Mokka and Grandland SUVs. This replaces the old car’s grille with a black panel that spans the width of the front end and is bookended by new LED headlight clusters, optionally upgraded to Vauxhall’s new Intellilux items with 168 individual LED elements.

It is further distanced from its forebear by larger wheel arches – accommodating alloy wheels from 16in to 18in in diameter – and an optional two-tone paint finish, seen here, which is also available on its SUV siblings. The Astra also follows its siblings in having its model name spelled out across its bootlid, which is now a plastic item to save weight. 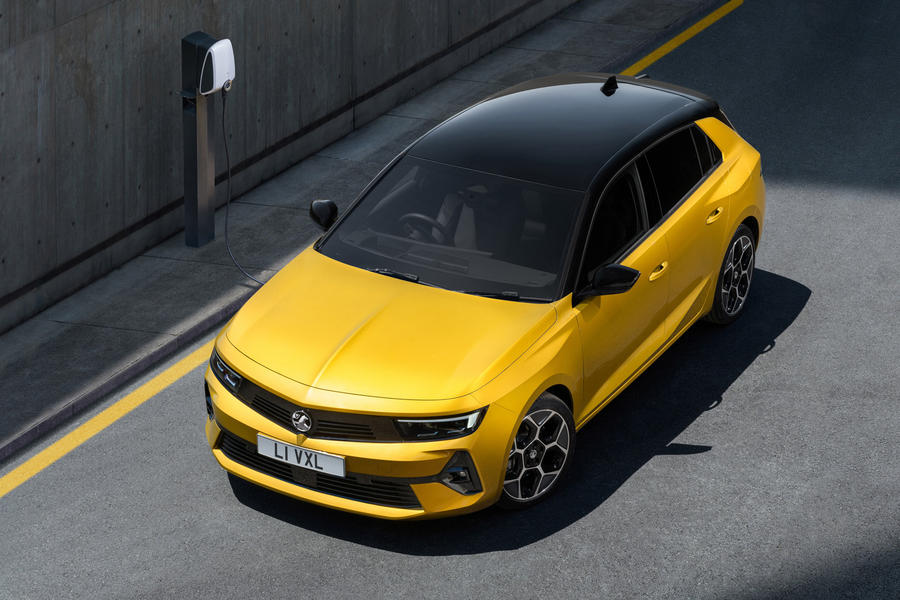 The new Astra is 4374mm long and 1860mm wide, with a wheelbase of 2675mm, growing slightly compared with its predecessor in all dimensions except height. Standing 1470mm tall, it is 15mm lower than before. Among the practicality gains from the increased size are a larger boot (with an adjustable base), at 422 litres, and the extended wheelbase is likely to improve leg room for front and rear passengers – although Vauxhall has yet to confirm exact specifications on that.

The design of the interior is a radical departure from that of its forebear, led by sharper and more angular styling cues and the introduction of Vauxhall’s new ‘Pure Panel’ dashboard design, which largely forgoes physical switches and buttons for a sleek, minimalist look. Instead, a wide-format central touchscreen is used for most controls – including Apple CarPlay and Android Auto as standard – while the old car’s conventional gauge cluster has been swapped for a fully digital unit and can be optionally paired with a head-up display unit. 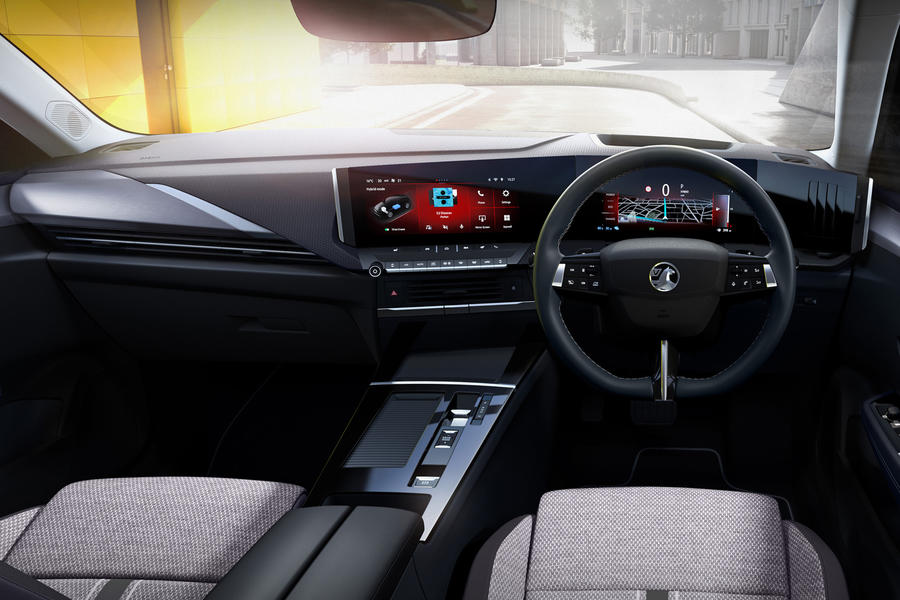 Some physical controls remain, sited under the touchscreen and on the standard-fit multifunction steering wheel, but Vauxhall has taken strides to modernise the look of its crucial hatchback, so the handbrake has been swapped for a small switch and automatic cars get a sliding gear selector in place of a conventional stick, which frees up the centre console for new storage cubbies with a cupholder.

Customer deliveries will begin in early 2022. Vauxhall has yet to confirm pricing, but a slight increase over the previous car is to be expected, so combustion cars are likely to start from around £22,000, with the PHEVs taking the list price past £30,000.

As with the outgoing Astra, a Sport Tourer estate-bodied variant will be available shortly after launch.

looks like another car going touchscreen crazy, having driven a current fiesta and now a golf I am at a loss why they are allowed, it is illegal to use a hand held phone in a car so why is a basically identical piece of kit legal to use ? The time spent with eyes off the road using these touchscreens is pretty significant so am amazed the authorities are not regulating their use or better still banning them.