7
How does the electric version of the radically restyled crossover compare with its petrol sibling and other related EVs?
Open gallery
Close

Vauxhall isn’t hanging around when it comes to electrification. By the end of the year, the British brand will have nine plug-in hybrid or fully electric models, a list that already includes the Corsa-e supermini, Grandland X plug-in hybrid and Vivaro-e electric van.

The new Mokka-e is gunning to be the most important of the lot. The compact crossover EV arrives as demand for electric cars is at its highest to date, and the small SUV class in general has never been more popular.

It also introduces a major departure from Vauxhall’s design norms, showcasing elements that premiered on the outlandish GTX concept car. These include a minimal Vizor front grille that merges the griffin badge and headlights into a single unit that also helps lower the car’s drag coefficient to 0.32, down from 0.35 in the old, petrol-powered Mokka X. Short front and rear overhangs help give it an altogether more purposeful look, one that I’d argue rubs shoulders with the Ford Puma for visual appeal.

The Mokka-e uses the same 134bhp motor and 50kWh battery as the Peugeot e-2008, with which it shares its CMP platform. The combination sends power to the front axle only through a single-speed transmission, promises 201 miles of WLTP-certified range, and supports 100kW DC rapid charging for an 80% recharge in 30 minutes. A Mode 3 cable comes as standard, but not a three-pin for home charging sans wallbox. 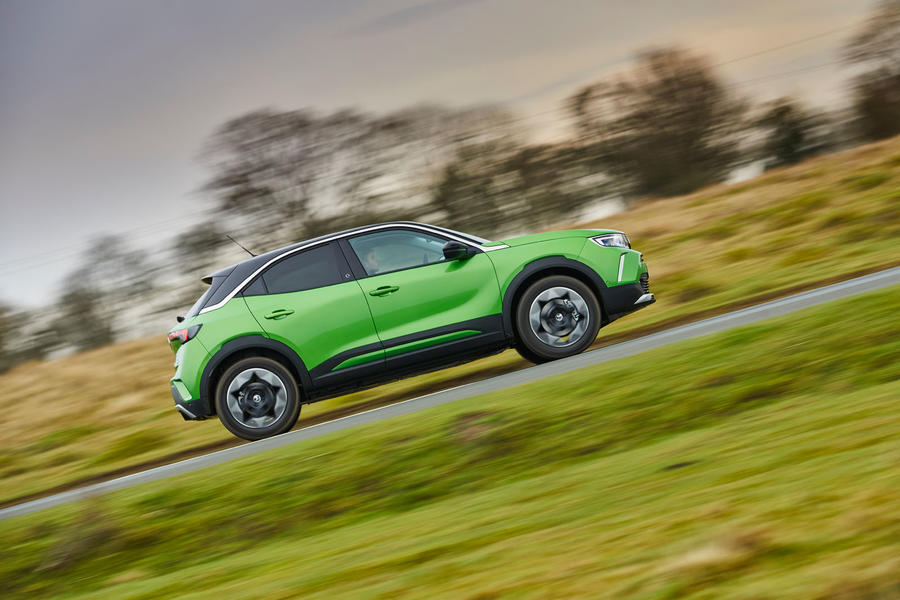 The electric motor is good for 0-62mph in 9.2sec, as long as you switch drive modes before burying the throttle: Eco mode restricts the output to around 80bhp for greater power efficiency, while the full 134bhp is only available in Sport, which uses a more aggressive throttle map and sharpens up the steering.

Acceleration is brisk, rather than startling, and only marginally faster than the 1.2-litre petrol, though the torque advantage means making a quick getaway at junctions or traffic lights can still induce some wheelspin. The dashboard instantly updates its range estimate when swapping drive modes, too, reminding you what effect your hooning can have on the battery. There is a button to increase the amount of brake regeneration, but it’s a take-it-or-leave-it toggle rather than the fine-grain control seen in the Hyundai Kona Electric.

The Mokka’s light steering doesn’t give the driver too much sense of what the front wheels are doing, but manages not to feel as over-assisted as the Peugeot e-2008. With 300kg of extra weight over the equivalent petrol model, body control isn’t quite as tight, so the Mazda MX-30 remains the more engaging EV to hustle through corners - even if the Vauxhall does hold on surprisingly well at speed. Slow things down and the ride is more than respectable, refusing to be unsettled by rougher surfaces and minor imperfections. Larger ruts still make their presence felt, but no more so here than in any close rival.

Cabin space is only marginally compromised by choosing electric over combustion, with the Mokka-e getting a reduced 310 litres of above-floor boot space, versus the petrol's 350. A pair of 6ft adults can sit in the back in relative comfort, though anyone taller is going to feel the pinch. Vauxhall has worked hard to reduce wind and road noise, which the absence of a combustion engine can be quick to highlight, but even at motorway speeds the Mokka is impressively quiet.

Every new Mokka gets Vauxhall’s new ‘pure panel’ digital dashboard, but only SRi trim and above get the full-fat version, complete with 12in instrument cluster and 10in touchscreen. It’s built into the dash, rather than free-floating, and gives the cockpit more of a driver-focused feel. The UI is fairly responsive, and while the graphics aren’t especially detailed, the handful of different dials and displays to choose from at least allow for some customisation. Apple CarPlay and Android Auto are both on-board, too.

Touchscreen aside, the centre console is very minimal, albeit still with physical climate controls. The transmission tunnel is mostly comprised of glossy black plastic, which doesn’t look especially premium, but materials quality is easily up to the class average. 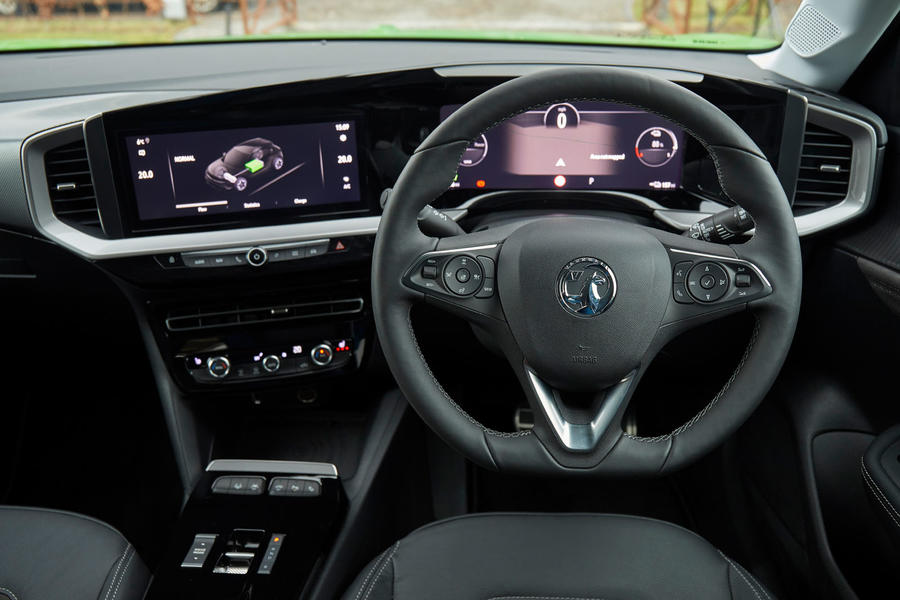 With few direct rivals, save for its Peugeot e-2008 and DS 3 Crossback E-Tense sister cars, the electric Mokka has an easier case to make than its petrol counterpart - though doesn’t have things all its own way. The Mazda MX-30 offers greater driver appeal, and the Hyundai Kona Electric promises greater range between charges.

Given it shares so much with the e-2008, it’s no surprise our first experience of the Mokka-e raises similar questions: namely whether its powertrain is exciting enough, given how closely matched it is to the ICE alternative, and if a real-world range closer to 160 miles can hope to challenge the electric class leaders.

For those who aren’t put off by the latter, it seems there’s plenty here to like. 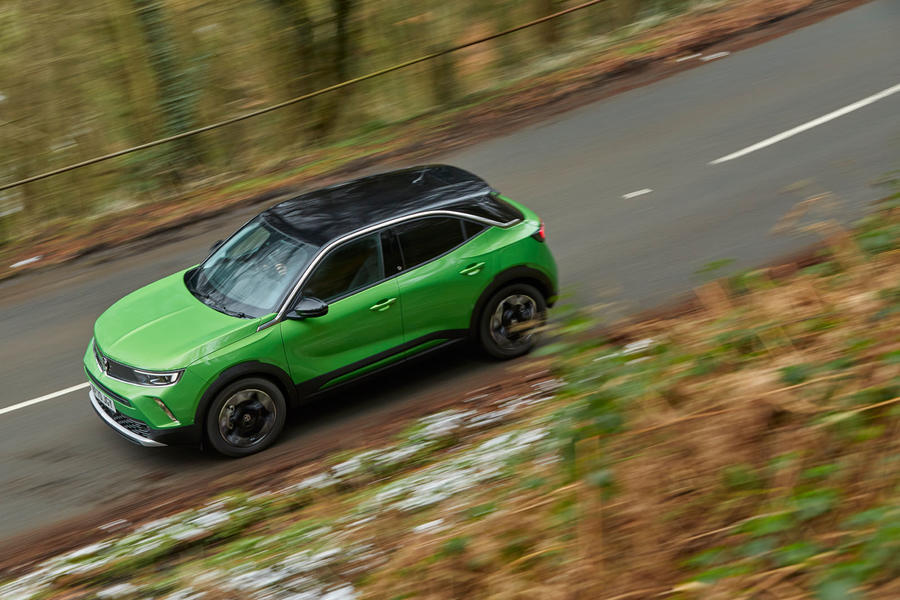 So Vauxhall's now making a mockery (at least that's what it sounds like).

si73 4 February 2021
I actually think this is a great looking car, well done vauxhall and Opel as I think it looks better than its PSA equivalents.
gavsmit 4 February 2021

Compromised and fiddled, though not just Vauxhall obviously.

Compromised because that claimed range is going to be well off the mark in terms of real range in perfect conditions but introduce a few passengers on a cold trot up the motorway in winter and the actual range will be terrible (like for all EVs).

I know we need to move away from ICE cars but the false promotion and huge prices of current EVs are nothing short of criminal.

Compromised and fiddled, though not just Vauxhall obviously.

Compromised because that claimed range is going to be well off the mark in terms of real range in perfect conditions but introduce a few passengers on a cold trot up the motorway in winter and the actual range will be terrible (like for all EVs).

I know we need to move away from ICE cars but the false promotion and huge prices of current EVs are nothing short of criminal.

I get what you mean but you can point at nearly all EVs for similar, Tesla's standout acceleration figures are in a set mode which you have to access, and that will seriously harm range. But iirc the V10 M5 didn't have it's standout performance unless M mode was selected, in other modes it lost a fair chunk of bhp, and I am sure it's not alone. All ice performance cars show a performance figure and a fuel economy figure, the two never meet so again how is the EV any different. I'm certain my wife's Mii will perform worse and provide worse economy in winter 4 up with heating on max, or for that matter in summer 4 up with Aircon on max. Again how is the EVs range and performance figures considered a fiddle or false promotion when ice cars behave similarly.