BACK TO ALL NEWS
Currently reading: New 2022 BMW 3 Series spotted during tests in Germany
UP NEXT
Volkswagen ID Aero is EV Passat equivalent with 385-mile range

The facelifted BMW 3 Series has now been revealed - click the link to read all the details.

The facelifted BMW 3 Series has been spied by our photographers in its clearest guise yet, undergoing tests on public roads in Germany.

BMW's executive saloon was pictured with an obscured front and rear, disguised by a black-and-white patterned livery.

Design updates appear subtle compared with the current car, but the model pictured features what appears to be M Performance styling and new aerodynamic addenda.

A spoiler is clearly visible at the rear, while there's a spoiler lip, larger air intakes and a honeycomb-style grille at the front.

The 3 Series is yet to feature BMW’s controversial new grille but does receive freshly updated front and rear lights. It will also once again offer a choice of saloon and estate (Touring) bodystyles.

It's not yet clear which engines BMW will offer for as part of the 3 Series’ update, but it looks likely that the model will retain a choice of petrol, diesel and plug-in hybrid powertrains. 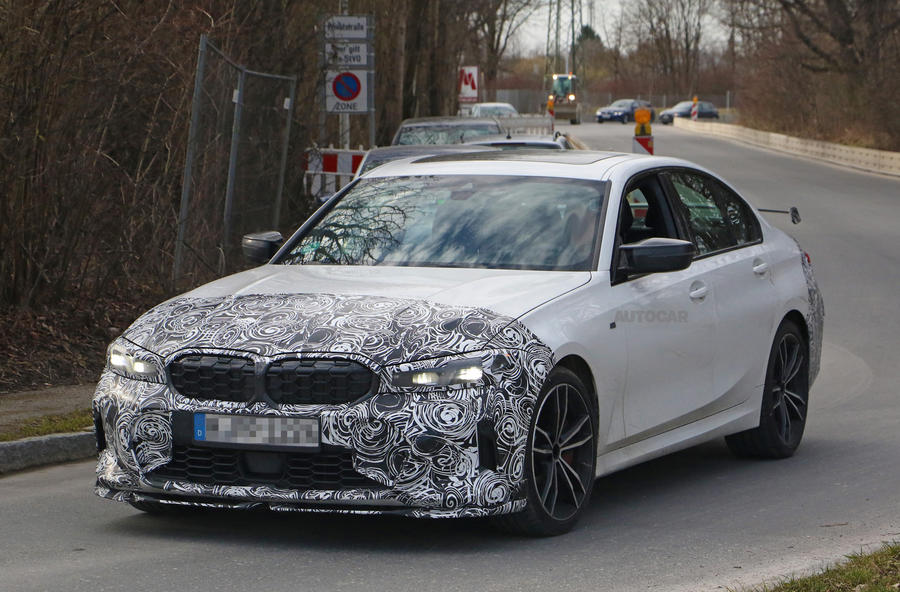 A mild-hybrid variant of the four-cylinder petrol engine could also be added to the range, joining the diesel and six-cylinder MHEV options.

One of the images also gives a hint of the 3 Series’ infotainment, believed to be the eight-generation of the firm’s iDrive system, as seen in the electric BMW iX and BMW i4.

Should the 3 Series gain the latest iDrive system, it would be one of the model’s major updates. BMW described the system as its "most powerful" yet, featuring a rotary controller, 5G data support, new touchscreen controls and a large, curved central display.

In the BMW iX, the system pairs a 12.3in digital instrument cluster with a 14.9in infotainment screen that has a 200ppi resolution.

The facelifted BMW 3 Series is expected to go on sale later this year, likely commanding a slight price premium over the outgoing car.

Log in or register to post comments
Yorkshirebred 22 February 2022
Why bother to disguise it? It looks exactly the same as the current one. They could have driven around without the disguise and attracted a lot less attention.
Peter Cavellini 22 February 2022

Such a shame, upon price means to me it's not on my shopping list, I had two 320i both were excellent Cars and never let me down, handled welll , a goo£ family Car.