BACK TO ALL NEWS
Currently reading: New 2019 Mercedes CLA images leaked ahead of reveal
UP NEXT
Spending 48 hours touring in a Ferrari Roma

Second-generation CLA will be revealed at this week's Consumer Electronics Show. A Shooting Brake version will arrive later this year
Open gallery
Close

Images of the second-generation Mercedes-Benz CLA have leaked online ahead of its imminent reveal at the Consumer Electronics Show, which is already underway in Las Vegas.

Australian site Redline published a handful of CLA images, which show the exterior and interior of the new model, before removing the post.

UPDATE: The Mercedes-Benz CLA has been officially revealed - get the details here

Set for UK delivery next June, the 2019 CLA adopts all the various developments already seen on other new Mercedes-Benz A-Class models, including a re-engineered version of its predecessor’s platform supporting both front- and four-wheel drive, and the choice of two different rear suspension systems.

Updated four-cylinder petrol and diesel engines also feature, as well as a contemporary interior boasting Mercedes' new MBUX operating system with digital instruments and touch screen infotainment functions, among a host of new equipment. A Shooting Brake estate variant will be unveiled later in the year.

Joining the recently unveiled A-Class Saloon as the second dedicated four-door model in an expanded eight-model strong compact car line-up from the German car maker, the new CLA has grown in size and is now longer than a BMW 4 Series Gran Coupe.  Figures are not planned to be made official until its unveiling, but Mercedes-Benz officials confirm it is longer than the 4549mm long A-Class Saloon.

The added length is concentrated mainly within the wheelbase, providing scope for larger rear door apertures, easier access to the rear seat and improved interior packaging with greater rear legroom.

As with the first-generation CLA, it receives a coupe-like profile with a heavily curved roofline and short boot.

Aerodynamic developments include an almost completely flat undertray with various diffuser-like elements to smooth airflow at speed. Mercedes-Benz is yet to reveal details, but it is believed the new four-door comes close to matching the outstanding 0.22 Cd of its predecessor despite a larger frontal area.

The new look is a further evolution of Mercedes’ so-called ‘sensual purity’ design lineage, with smoother and fuller forms set to replace the taut surfacing treatment and heavily etched swage lines of the first-generation CLA. The design-led focus is what will distinguish the CLA from the A-Class Saloon, similar to how the larger Mercedes-Benz CLS sits alongside the Mercedes-Benz E-Class.

Recently seen prototypes also point the way to the look of the second-generation CLA Shooting Brake estate. Like its predecessor, it's expected to receive a heavily stylised appearance, with a sloping roofline and angled tailgate set to prioritise appearance over load-carrying capacity.

Power for the new CLA pair will come from a range of four-cylinder petrol and diesel engines, including a powered-up version of Mercedes’ latest M260 petrol unit in AMG's new four-wheel-drive CLA 35 4Matic models. That shares its powertrain with the recently launched A35 AMG variant.

Spy photographers have recently snapped both the AMG CLA 35 and CLA 45 models, set to launch a few months after the standard CLA, testing with relatively light body disguise. The 'mini-Mercedes-Benz CLS' body shape is clear to see, with the lesser-powered 35 - due to put out 302bhp - featuring dual tailpipes, and the range-topping 45 featuring quad pipes. 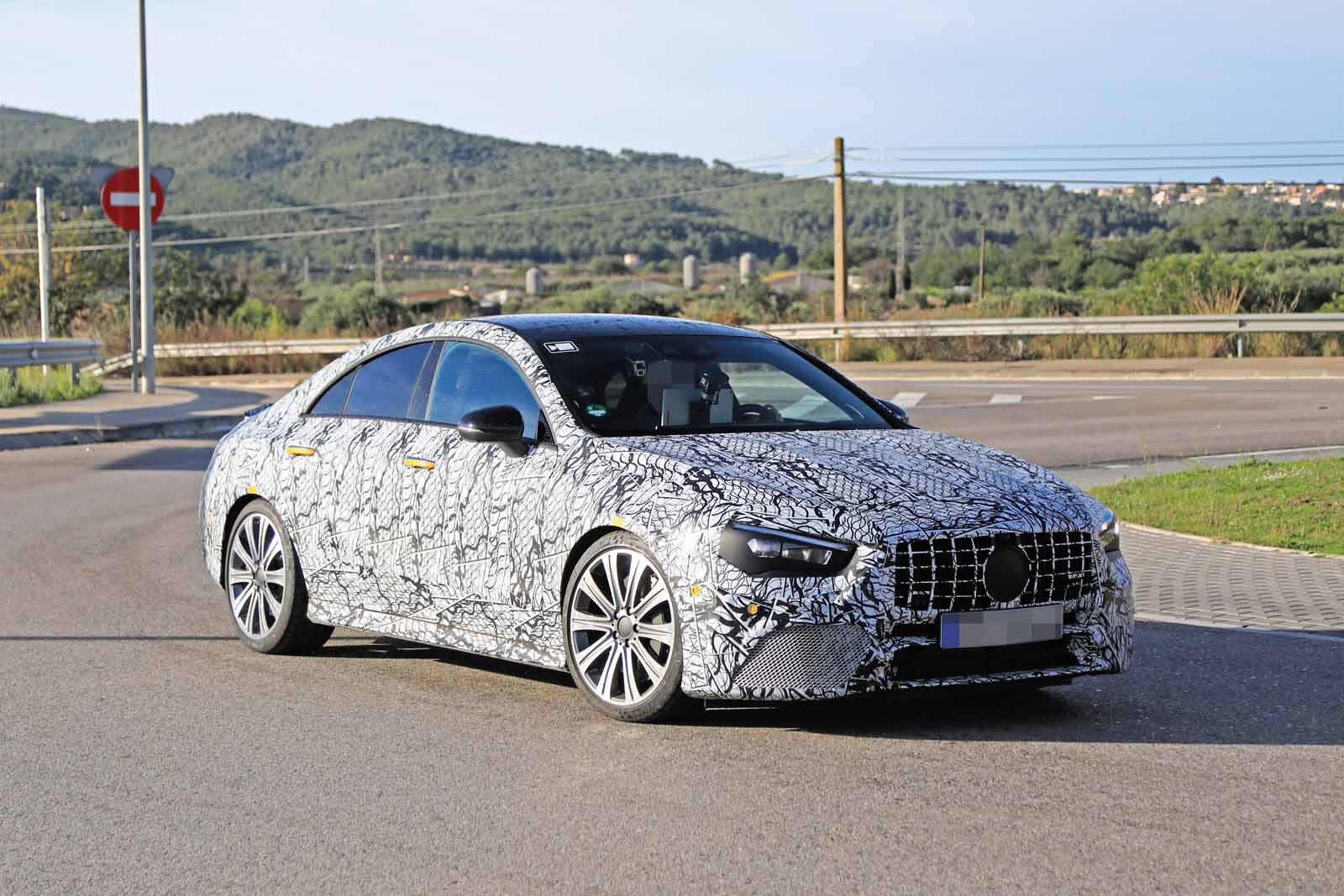 Powertrain specs for the upcoming Mercedes-AMG A45 hot hatch have previously been accidentally posted on a German insurance website, indicating that the 2.0-litre turbocharged petrol engine would receive 382bhp in standard form and 416bhp in 'S' form. The CLA will share the same four-wheel drive powertrain, so power is expected to be identical.

A more highly tuned version of the M260 engine will be used for range-topping CLA 45 models, according to AMG officials. Those variants will, like the upcoming A45, use an eight-speed dual-clutch automatic gearbox and newly developed four-wheel drive that features an electronically controlled ‘drift mode’.

Other new Mercedes models confirmed for sale in 2019 include the new GLE, the third-generation B-Class and the first model from Mercedes’ EQ electric car division, the EQC, all of which have already been revealed.

Don't worry Merc fans will lap this up..

CLAs always make me think of

It’s f I had to chose I’d have the shooting brake, it’s better resolved than the Saloon, Mercedes design don’t seem to be able to do the rear end of their Cars just now...