In the same week as giving the first details of its 2023 debut EV, Rolls-Royce is showcasing the ultra-exclusive, coach-built Boat Tail for the first time at the Concorso d'Eleganza Villa d'Este in Italy.

The most expensive model that the British marque has yet produced takes a name last used for a series of coachbuilt Rolls-Royces in the 1920s and 1930s, it refers to a distinctive rear end that mimics a J-class yacht’s hull.

A bold and imposing two-door, four-seat grand tourer, the car is 5900mm long and has a removable ‘canopy’ roof. Three examples have been hand-built, heavily customised to the desires of their buyers, who were involved throughout the entire design process.

Rolls-Royce Coachbuild Design boss Alex Innes called the creation of the Boat Tail “a unique collaboration” between Rolls-Royce and its clients.

He added: “The clients were totally empowering and encouraging for us to project our future of the brand, and I can stand proudly and say that this is our car; this is the car that we wanted it to be.”

“The clients established at the very beginning that they wanted to create something they had never seen before,” Innes said. “They appreciated the hallmarks of Rolls-Royce design and encouraged us to move beyond the familiar traits that we see today and design something that points towards the future.” 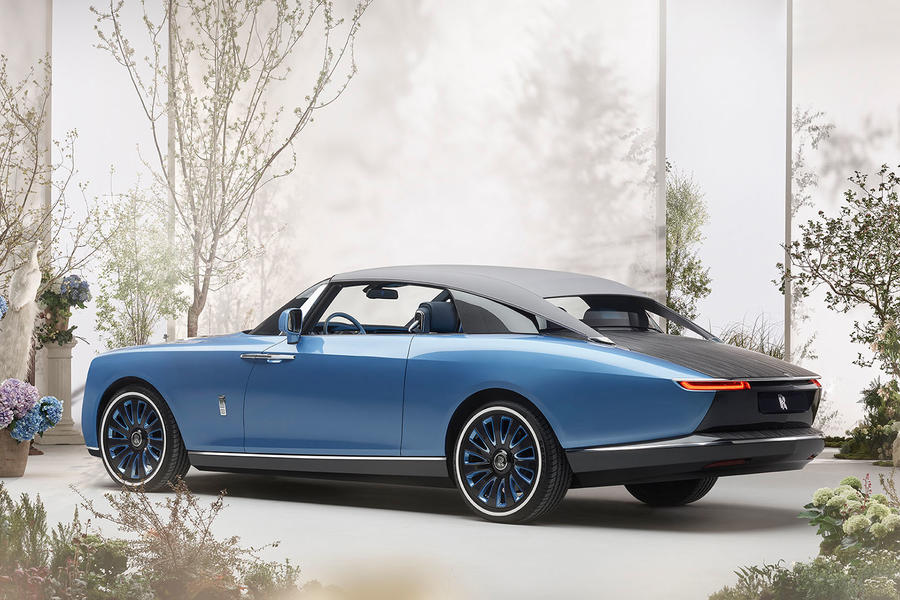 Rolls-Royce boss Torsten Müller-Ötvös said the project has led to the expansion of Goodwood’s bespoke commissioning service into a full Coachbuild division that will henceforth become a core part of its business plan.

“Rolls-Royce Coachbuild is the return to the very roots of our brand,” Müller-Ötvös said. “It represents an opportunity for a select few to participate in the creation of utterly unique and truly personal commissions of future historical significance.”

The Boat Tail has echoes of the Sweptail, a one-off coupé unveiled in 2017. Innes revealed that this prompted a surge in interest from buyers in coachbuilding and served as the starting point for the Boat Tail’s four-year design and development process.

He said: “There has never been a modern interpretation of the Boat Tail bodystyle, and it’s something that we’ve harboured an ambition to do. We’ve had various interpretations on our studio walls and worked on early proposals and concepts.

“The launch of Sweptail stimulated this interest, and we were able to collate a collective of three buyers who had a certain sensibility in terms of understanding of the brand and wanted to be part of creating a modern chapter for it.” 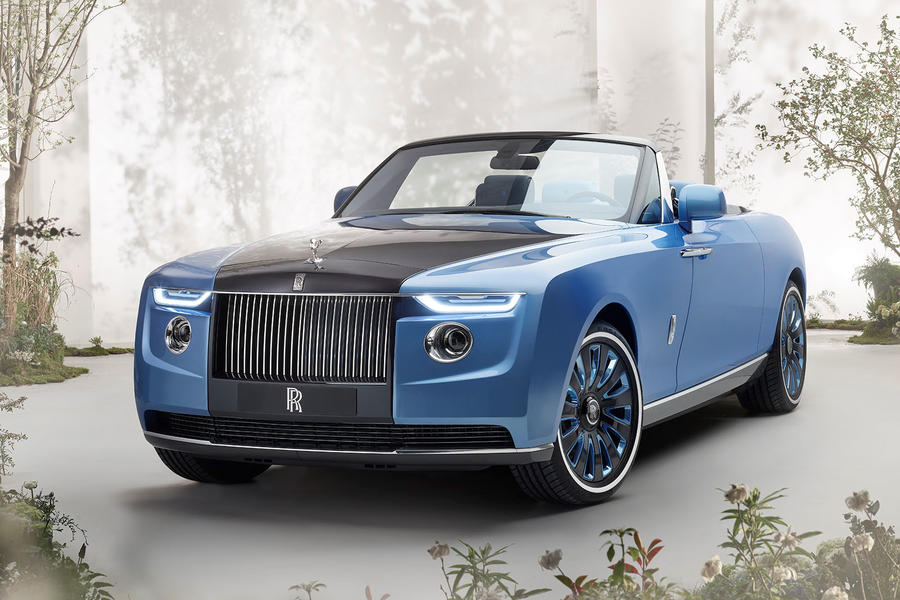 The Boat Tail uses Rolls-Royce’s new Architecture of Luxury platform and the 563bhp 6.75-litre twin-turbo V12 engine from the Phantom. Innes explained that the all-aluminium architecture offers the scope and “flexibility to work on a low-volume basis”, with considerable freedom for future Coachbuild projects.

While a handful of safety elements are taken from the Phantom, virtually all of the Boat Tail is bespoke, including every body panel and its front and rear lights. In total, the car features 1813 completely new parts. Even the Phantom’s sound system had to be re-engineered to ensure it would work optimally in the Boat Tail.

The car pictured here was created for a client who also owns a 1932 Boat Tail. It’s hand-finished in their favourite colour and the rear deck contains a full ‘hosting suite’ that automatically opens to the ‘ideal’ serving angle of 15deg. It features two full fridges, including one for the client’s preferred Armand de Brignac champagne and a cutlery and crockery set custom-made by Christofle.

The suite also includes two carbonfibre stools created in association with Italian firm Promemoria to sit beneath a distinctive parasol that extends from the rear deck.

At the front of the cabin is a minimalist dashboard that was custom-designed to fit the tastes of the client, with pared-back use of switchgear and much of the modern technology hidden.

The centrepiece is a unique clock fitting in which two timepieces from Swiss watchmaker Bovey can be placed. These watches had to be extensively re-engineered to ensure that they would work when placed in the car. 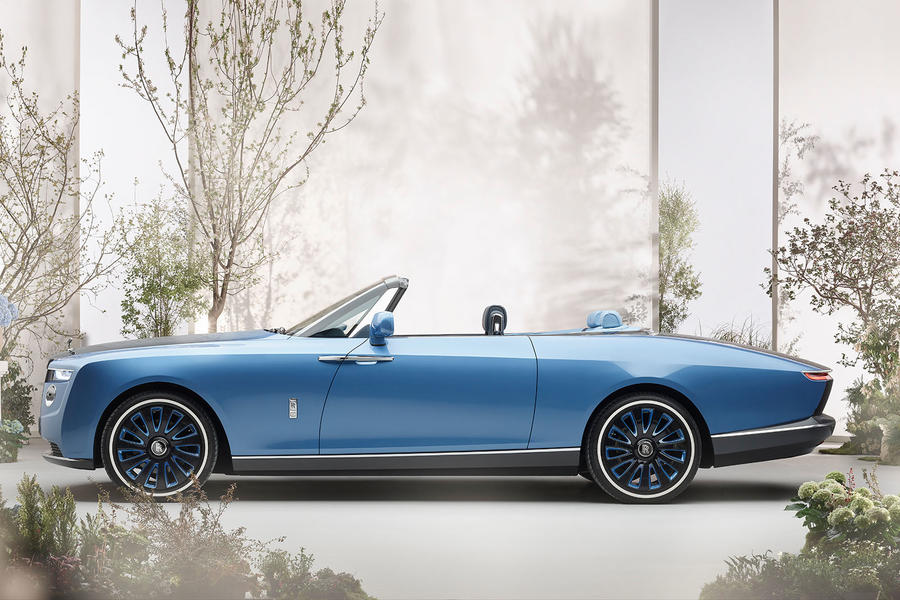 The operation of the hosting suite required the addition of five extra electronic control units, plus two fans were installed to ensure that the heat absorption didn’t affect the food and drink kept inside the unit in hot weather.

The three Boat Tail cars have each been put through full homologation testing, including high-speed running around the bowl at Millbrook Proving Ground, to ensure that they are ready for every kind of road use.

Rolls-Royce declined to disclose the price of the Boat Tail, but sources suggest that the greater level of bespoke design meant it “significantly exceeded” the price of the Sweptail, which was reported to be around £10 million. It’s thought the final price tag of the car it around £20 million.

That far exceeds the reported £11.3m value of Bugatti’s Chiron-based La Voiture Noire one-off from 2019, which was previously thought to have been the world's most expensive car.

There are more positive posts than negative on the Car, there are the impatient ones too,and there are the ones who can't get their point over without resorting to taunting others, your opinion is your opinion,I've tried to not comment on others because it's a fruitless journey, Cars like these which are made in tiny numbers of 3,5,10 aren't cars we're going to see sitting in a child space at a shopping Mall, they may even only turn a wheel to put it in its own heated climate controlled Garage,and, as I said, there are a few posts on here who would pay the asking price, and I guess,because your only make a limited number, you can charge what you think some of your repeat customers will be prepared to pay, the Car in a way isn't worth the asking price,probably all the materials used to make it don't cost £20million, what your paying for is a Car that'll go up in value, you'd maybe only drive it two, three times a year, and I might add, it's not the fault of the well off that the World is in a state as it is,no, that's down everybody on this Planet, and, tell me, do we like paying Tax?, wouldn't you offset as much is legally allowed?, after all, you've worked hard for it, at the moment it's get on with your life never mind others.

Hardly!, there only making three, a cool £60 million, not a lot in the Car making business, where's the harm?, besides, would you if you had the folding to be offered one, never mind what the World is like today, you'd buy it, well, there are nice people just like us who can, granted, not all are nice, why shouldn't they buy it?, after all, it's not our business.