BACK TO ALL NEWS
Currently reading: Mitsubishi still aiming to develop new Shogun off-roader
UP NEXT
Motoring heroes: the most inspiring people in the car industry

Mitsubishi is still planning a new generation of its long-running Shogun off-roader but won’t commit to its development until it can be sure that it will be profitable.

The heavy-duty seven-seat 4x4, known as the Pajero in some markets, is one of the firm’s longest-running models, dating back to 1982. The current, fourth-generation model dates from 2006 – and is heavily based on the previous generation that was launched in 1999. A replacement has been planned within the firm for years.

While tightening emissions and safety regulations mean that the current Shogun has a limited shelf life, Mitsubishi has struggled to balance the high cost of developing a hardcore off-roader with the limited market for such vehicles.

Trevor Mann, Mitsubishi’s chief operating officer, said the firm “has a passion” to produce a new Shogun but that “we’ve not defined our position yet”.

He added: “It’s something that our engineers really want to do, but we’ve got to make sure we have the right business case, and that segment is naturally shrinking due to emissions regulations. We need to make sure that when we do something, we do it properly and it’s future-proofed.”

The Renault-Nissan-Mitsubishi Alliance is beginning to implement shared platforms across its brands, and that would help to spread the development costs, but neither Renault nor Nissan currently makes a comparable off-road vehicle that would utilise a similar platform.

All Mitsubishi reviews on Autocar 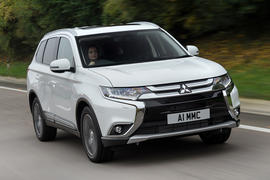 19 November 2018
So the Nissan Patrol as used by the UN and various armies wouldn't provide a good platform share for a new Shogun? A bit odd .

Mitsubushi can use a modernized smaller version of the platform used by Nissan for the Patrol you see all over Dubai. Come on Autocar.

If they can’t make a business

If they can’t make a business case now, and see it as a shrinking market, they never will. Having owned 3 Shoguns since my first in 1986, and being very pleased with all three, I accepted years ago that this model is sadly being allowed to wither.

Would it not be possible to modify the L200 chassis? I know we've got the shogun sport but surely you could use the same chassis, perhaps strengthened and altered for a new shogun. Plus is it that expensive to develop a new ladder chassis? They're not exactly cutting edge technology.

Surely this provides Nissan And Renualt a golden opportunity to merge both the Patrol and the Pajero/Shogun lines,the current Patrol was introduced eight years ago and is only available in certain markets. Not sure if it would be better for the Patrol to go mono coque or for the Pajero/Shogun to get it's separate chassis back.but I can't see Nissan, Renualt & Mitsubishi backing out of this market and leaving the field to the Land Cruiser

Surely this provides Nissan And Renualt a golden opportunity to merge both the Patrol and the Pajero/Shogun lines,the current Patrol was introduced eight years ago and is only available in certain markets. Not sure if it would be better for the Patrol to go mono coque or for the Pajero/Shogun to get it's separate chassis back.but I can't see Nissan, Renualt & Mitsubishi backing out of this market and leaving the field to the Land Cruiser

Nissan sell circa 50000 of these Patrols in Armada/Infiniti guise a yr in the USA alone, never mind the middle east/africa markets, they will not be backing away from this segment. Been making the Patrol since 1951!

I guess that with time people

19 November 2018
I guess that with time people will know the worth of trying the converter even on https://www.altoextractpdf.com/. I know this because I've asked so many people out there and they are with me.

I believe there is still room in this world for a few proper ladder frame workhorses, so I would be sad to see Mitsubishi not bother with a next gen model. They need better power to weight ratio's.

Parts prices (even service items) were poor quality and much more expensive than Mercedes-Benz parts on my current cars....never could understand where they comjured these prices up from, but at least they were very reliable.

Shogun ceased to be an option for me when the range dropped the V6 for weedy 4 cylinder diesels. Double figure acceleration times dont work for me!

What they need to do FIRST is

What they need to do FIRST is employ a European designer and drop their diesel engines!  FFS!

What they need to do FIRST is employ a European designer...