BACK TO ALL NEWS
Currently reading: Mini John Cooper Works versus Audi S1 - comparison
UP NEXT
Nissan will build batteries in UK to sustain Sunderland plant

Feisty place, the Square Mile. Especially on a week night. At chucking out time.

The sun went down four hours ago, and it’s been raining for much longer, but for a bottle-carrying hardcore, the working day isn’t over. Nor for us though, a bedraggled North Face-sponsored foursome, as conspicuous among the Bishopsgate throng as a murder of crows in a pink sea of flamingos.

The motivation for our night expedition to the City of London is simple enough: the latest Mini John Cooper Works is the newcomer to the Audi S1’s tiny speed-freaky niche, and because its brittle predecessor made about about as much sense in London as a pogo stick, we thought we’d begin in the one place where a hot supermini starts to make sense.

Four hours earlier and the cars’ combined 456bhp wouldn’t have made a fig of difference. The capital’s rush hour best suits two wheels, not four. But after dark, the traffic eventually thins to a steady trade wind of double-deckers, cabbies, delivery drivers, bin men, Uber hybrids and coppers.

All mercilessly impatient, semi-sure of where they’re going and utterly mercenary about how to get there. Now it pays to be small, agile and as swift as sin.

Both cars fit the billing. The Mini, like our Leadenhall Market backdrop, has heritage on its side. Pea-soupers were a recent memory when John Cooper set to work on Alec Issigonis’s baby. Thirty years later his name and vision weren’t forgotten when the Mini was overhauled by a new guardian.

Now in its third generation, the new Mini JCW is the most powerful production variant yet built by BMW. Its 228bhp, developed by a modified version of the turbocharged 2.0-litre engine already found in the new Cooper S, stands it directly at eye level with the four-wheel-drive S1, our Lloyds Building for the night – it being a radically over-engineered solution to a simple requirement also, although one without an 18th century dining room installed.

Static photo and wonky metaphor completed, we head out to brave the mean streets. Mini first. And bad news. It’s a truth universally acknowledged that to live with a Mini, you must first make peace with its try-hard interior.

Happily, the JCW’s footprint is restricted to a pair of very decent bucket seats and a surprisingly modest dusting of what look like low-rent stickers. Unhappily, there’s no clutch pedal in our test car, and the gearstick moves only fore and aft. There are paddle shifters, but they’re as appropriate for the Mini as hanging baskets would be on the Gherkin.

Previously, a spiked bar stool at an actuary’s leaving do would have been preferable to bouncing round night-time London in something as misaligned as an automatic JCW, but the latest iteration barely needs to round the first proper corner to announce itself as different.

As assuredly as the Cooper S did last year, the JCW – even with further uprated springs and brawnier anti-roll bars – now rides in confident style. Although the JCW is as firm and incessantly busy as it ever was, the ridiculous skittishness of its forebear has been adroitly tamed, helped along by the decoupling ofthe dampers from the body via triple-path strut mounts plus, in this case, the £240 fitment of Variable Damper Control.

By lessening the requirement to slalom around manhole covers like Chemmy Alcott, the liveability (and, in turn, likeability) of the JCW is transformed at a stroke. So much so that even the Steptronic torque-convertor gearbox comes good.

The generous step-off momentum, prudent upshifts and faultlessly smooth delivery make it a fine fiddle for the 236lb ft of single-mindedness served up practically from idle. 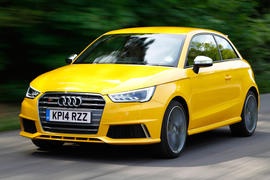 If that sounds like a rather grown-up prospect, then good – because it feels like one. Like all its newly introduced stablemates, the JCW comes with a keen sense of its own solidity, feeling every bit as well assembled as a BMW 3 Series.

The resulting cohesion with the running gear’s native tautness is impressive: from spring to mount to body to dashboard to steering wheel to palm, there’s no longer any chink for your admiration to slip through. Instead, with big mirrors outside and excellent iDrive-derived sat-nav inside (courtesy of a £1400 Media Pack), you merrily bound from crawl to dawdle to sprint and back again in almost total small-car contentment.

That leaves little space for the S1 to mount a proper charm offensive, and initially it stumbles even where it ought to automatically triumph. Following the bulletproof function of the Mini, the Audi feels unusually flimsy, most notably through the over-assisted steering and the colossal play of the six-speed manual stick, which is both far too lightweight (finding reverse when you’re looking for first) and too vague (finding the gate when you’re reaching for third). More damningly, the lightness of the S1’s controls doesn’t necessarily translate into ease of use.

The Mini’s steering, for example, may be heavier but it’s also quicker. In the Audi, the front end’s refusal to respond properly to initial input often means that there’s a bit more lock to wind on and off.

Nevertheless, the S1 only requires you to be in the outside lane at a set of traffic lights with a next-left turn to make in order for it to suddenly have you on-side.

Where the Mini is purposefully brisk through the first two gears, the Audi, thanks to its four contact patches’ better purchase on London’s rain-slick streets and an additional 37lb ft of twist from its own 2.0-litre turbocharged four-pot, feels genuinely quick – quick in a stomach-flattening, time-saving way that currently separates its 5.8sec 0-62mph time from everything else in the supermini class, JCW included.

That attribute, though, as addictive as it is, proves insufficient to overcome the more rounded Mini after a night on the town. The ride isn’t quite as clever and nor is the refinement; the infotainment, £1495 sat-nav included, is a generation behind, while the interior, although perfectly pleasant, doesn’t rise to the occasion in the way that the engine does. Round one to the Mini, then.

Round two, mercifully, occurs at midday. A straight-line sprint from the Surrey Hills to a petrol station in Maidenhead, using every B-road between the two, before swapping cars and coming straight back. It’s a lovely day.

The sun is out and, to begin with, the way is as familiar as an old friend’s face. Such occasions aren’t typically suited to a fast Audi but there’s something curiously endearing about the S1. Certainly, there’s a moreishness about the poke, the detuned EA888 motor delivering a linear yet unencumbered growl.

We’ve previously accused it of being underwhelming, but that’s a relative truth. In actual fact, it’s just not quite quick enough to prevent you from flogging it absolutely everywhere. Because the S1 is so small, you don’t feel guilty about doing so, either.

Nor does it seem particularly perilous. The clutch on that expensively repackaged rear axle parcels out just enough torque to make the car’s impishness seems appropriately surefooted.

What’s unusual, then, is the faint giddiness that accompanies the endless flogging. Perhaps it’s because there’s room enough in the S1’s suspension travel to meet mid-corner bumps without having you off, so you tend to hang on in the bends while simultaneously hardly using the brakes.

Perhaps it’s the car’s provenance beavering away at the subconscious, the thought of its near rejection and the fact that it is fundamentally too expensive and complicated, and therefore not the totally brilliant business case that Audi habitually makes for everything.

The idea of it instead as a basket case, existing only by virtue of a quirk in the formidable quattro logic, is a compelling one – and it’s hard not to make it fit the car’s slightly dishevelled character by the time I lay anchor on the Shell station’s forecourt.

Tellingly, there’s a twinge of disappointment to see the back of the S1 just 10 minutes later for the return leg. Thanks largely to the automatic gearbox, the JCW doesn’t dare you to strong-arm it everywhere. It feels heavier, too, despite inevitably carrying less weight than the tech-heavy Audi.

Consequently, the mollifying quietness that kept you nicely isolated in the city has a tendency to become cloying if you let it. Try to interject with the same injudicious prods of the throttle applied in the S1, though, and you’ll simply expose the absence of a proper limited-slip differential in the nose and the location of the traction control light on the instrument cluster.

The JCW actually uses equal-length halfshafts at the front end for a more consistent steering feel, but that doesn’t prevent the steering wheel from going characteristically light whenever it’s overloaded with torque.

The solution, unsurprisingly, is not to try harder at it, but better. There’s no place for the same thoughtless frenzy aboard the Mini. Instead, you work steadily until the JCW’s hyperactivity becomes a groove.

Adapt to the hair-trigger steering properly, change gear manually to harness the four-pot’s latter-rev largesse and instinctively manage its weight shift with the throttle, and the chassis will respond with a full-bodied poise unknown to its rival.

The JCW’s new-found ability to negotiate sharp-edged obstacles has in no way undermined the intensity of its turn-in. The change of direction is far more direct than in the sloppier S1 and, needless to say, more adjustable thereafter.

The more you drive the Mini, in fact, the more one-dimensional the memory of the Audi becomes, its lifelessness at low speeds a curable condition but only by continually operating at the opposite extreme.

For a one-off 30-mile blitz, that’s fine. For long-term ownership, it probably isn’t. Moreover, there’s no getting away from the relative cost: the Mini, with the manual gearbox that you want, starts at around £23k, whereas the S1 is beyond £25k and, because of 166g/km CO2 emissions and lowlier economy, is more expensive to run.

None of that entirely overwrites the Audi’s curio charm though. I wouldn’t be the least bit surprised if its pint-sized quattro underpinnings make it something of a prized secondhand prospect five years down the line. More so, perhaps, than the JCW, which although proving itself dynamically mightier in this comparison, doesn’t entirely justify the idea that its near £5k premium over the standard Cooper S is warranted.

Without trying the manual version, though, that’s by the by. For now, Mini’s deft punch lands well enough on target,  making the JCW if not the quickest big-engined supermini then, for now, certainly the most complete.

"The working day isn't over.

I just found this really hard

Too many contrived metaphors and dodgy clichés
Malcypoos 20 June 2015

Agreed jer....peculiar report.
I think Nick wrote this during a 'creative' phase. Maybe he is trying for a Booker literary prize!
Frightmare Bob 20 June 2015

The Mini, like our Leadenhall Market backdrop, has heritage on its side.