The holiday home on wheels is here to stay. We forgo the Travelodge to sample different takes on the camper-car formula
Open gallery
Close

This is elevated living of a different kind. Not living in a high-end house, or decamping to a five-star hotel, but living several feet above the ground and beneath a roof, in the dry, with light and bedding.

That might not sound much, but it is when you’re about to spend the night in a field, having arrived by car. For many, the next step will be a romantic but potentially miserable wrestle with a tent. More luxurious, if less adventurous, is to arrive in a vehicle that doubles as your accommodation.

It’s two of the latest of these self-contained, wheeled shelters that we plan to test by taking them to the Latitude music festival in Henham, Suffolk. One is a Mini Countryman carrying a tent in a roof box. The other is the Mercedes Marco Polo campervan, which provides rather more in the way of amenities.

For almost as long as the car has existed, people have used it as a device of escape. Escape from the drudge of work, escape from the same old scenery, escape to a lover’s arms and escape to a dreamed-of holiday destination. Once the piston engine had become powerful enough to haul a car, its occupants and a bit of luggage, it wasn’t long before the idea of combining a car with a compact house, in emulation of a snail, took hold. The first of these is thought to have been the 1910 Pierce-Arrow Touring Landau. Motorhomes and campervans have been around for a good century, almost as long as the option of piling a tent into a car and pitching up for a scenic adventure. 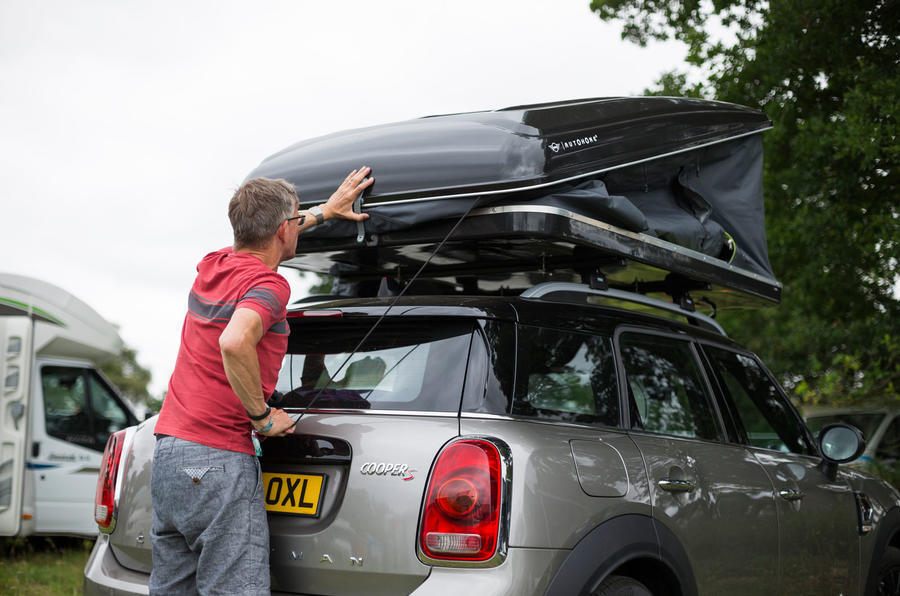 Campervans have got better over the decades and the Marco Polo is Mercedes’ latest device for providing instant overnight accommodation. Tents have improved, too, Mini’s ingenious glassfibre box enabling roof-top accommodation for two. It’s not cheap, though: £2762 is plenty for a compressible rectangular enclosure and mattress. To this you must add the price of a Countryman, of course, and our range-topping £36,610 Cooper S All4 Countryman takes the total to £39,372. A base Countryman costs £22,625 and pairing the tent with this would substantially undercut our Marco Polo.

Here, that latter option is a 220d Sport long-wheelbase model costing £53,825, without almost £7000 of options. An auxiliary water heater (£1345) and a side awning (£695) are the only items directly relevant to bedding down. The Marco Polo is the campervan version of the Mercedes V-Class minibus. Converted by specialists Westphalia, it’s a regular member of the Mercedes range.

It rides on a long wheelbase, sleeps four and includes a kitchenette with two-burner hob, a fridge, a sofa bed, a wardrobe and an elevating roof in which a second, high-rised double bed can be found. All that’s missing is the loo and a shower, these absences defining the vehicle as a campervan rather than a motorhome.

Your occupation of this compact world is enjoyed while stepping on yacht wood flooring, the V-Class’s electrically sliding side door opening towards an awning that can be extended outwards with the aid of a winding handle and an assistant to fumble the telescopic aluminium legs into place. 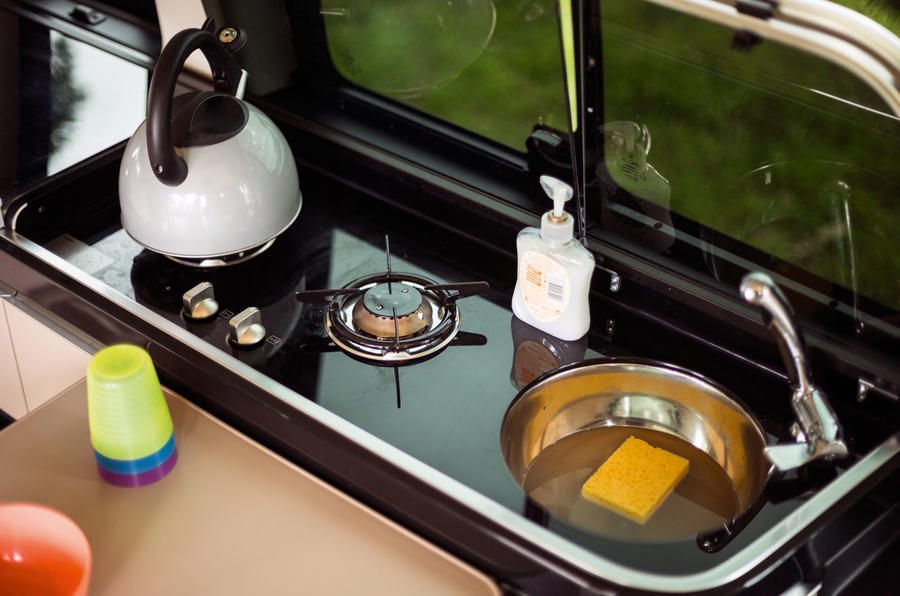 Erecting this shady canvas roof takes longer than it does to turn the Mini’s top box into a tent. To achieve this, you must release the trio of ribbed tongues that keep a lid on the tent, whose glassfibre roof gently lofts skywards on a quartet of gas struts. If you get the knack of releasing those nail-breaking tongues, your shelter can be ready in around one minute. A mattress and two pillows are included, as well as an aluminium ladder that’s almost essential for the ascent to bed. The AirTop roof tent is the work of the Italian Autohome company and the Mini design team and is intended to appeal to those given to making spontaneous overnight sleeping arrangements in random locations.

Our plans are neither spontaneous nor randomly located, the aim being to test both vehicles in the real world of a Suffolk music festival. Mumford & Sons are headlining, along with Fleet Foxes and a heap of other bands, as well as a smattering of comedy and cabaret and an impressive array of food stalls. To get the best from it, you could stay from Thursday night to Monday morning, but we do Friday to Sunday, which means two nights aboard our vehicles. The ‘we’ in this case are an old mate and his two teenage kids, my wife and your reporter.

Our destination is the campervan field at Latitude. It’s more than 130 miles to Henham, near Beccles – far enough to drive both these mobile homes and discover the very obvious. Which is that they’re about as different to pilot as a seaplane and an executive jet. That’s no surprise, given that one is a sporting hatchback carrying an object on its roof and the other is a minibus carting the contents of a small flat.

The Mercedes is a valiant performer so long as you’re bold with the accelerator, because the 2.2 diesel is a gatherer of momentum rather than a power-packed propellant. Given that these are relaxing holiday wheels, that matters less and, in any case, the Mercedes feels quite hefty in bends, which it nevertheless negotiates tidily enough. The Mini feels lithe, eager and almost unaffected by the flat-pack penthouse apartment on its roof. It’s not quite entertaining enough to wear Cooper S badging, but it does ride with a pliancy uncharacteristic of Minis. All of which makes it more than decent as everyday wheels. The Merc, on the other hand, would be ponderously extravagant as daily transport.

But it’s a great place to enjoy the mornings before the festival kicks off. You can seat four around a fold-out table once you’ve swivelled the front seats. That’s fiddly – they must be repositioned on their runners several times to clear the bodywork – but it gets easier, and erecting the table is simple. You can also enjoy the lazy novelty of sitting while cooking or washing up, although there’s plenty of space to stand beneath the elevated roof. Housed within that is a double bed of impressive comfort, making it all the harder to stir yourself and clamber back down to get the things you forgot to carry up in the first place. There’s even a USB port at this upper level, although we found that phones charged at a glacial rate. That may be because, ideally, the Marco Polo should be plugged into a 230V power supply, unavailable in our field. 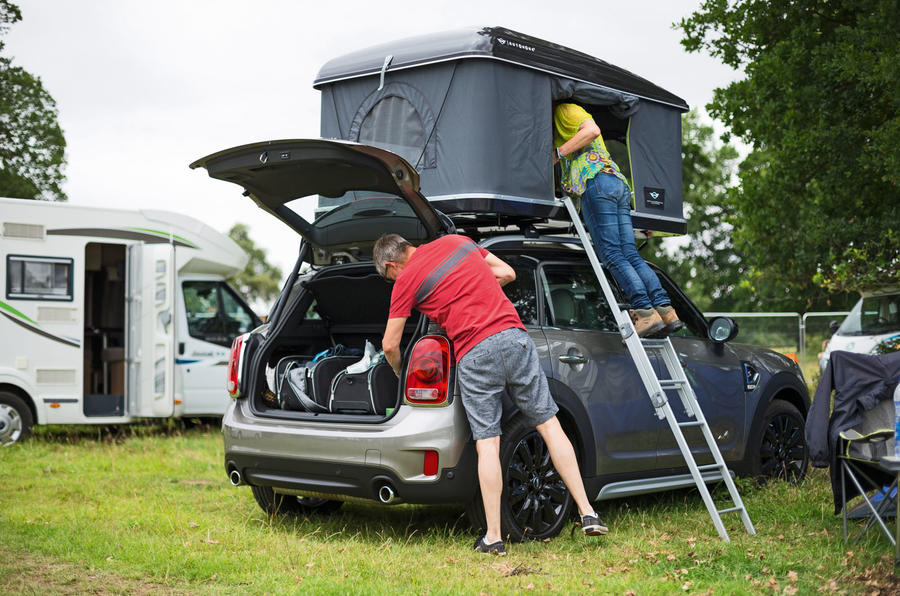 No such facility is required for the Mini’s tent, whose sole electrical item is an off-grid light – whose batteries are flat. But you’ll need a torch anyway, to unzip the tent’s flap (there are two, conveniently), extract the ladder and climb in. It’s cosy for two but more comfortable than it sounds. There’s a big net shelf to carry clothes and stuff, you can open extra panels for ventilation and you learn to live with whichever telescopic strut you’re sleeping closest to. Obviously, you can’t do much in here except sleep – you can comfortably sit up, but not stand – and there’ll be no making tea, either. But as instant, comfortable, go-anywhere, rain-proof and wind-proof accommodation for two, this top box is brilliant.

The Mercedes is in a different league, with its space and well-made facilities. When plugged in, it’s airconditioned and has all that you need apart from loo and shower, although there’s a hose for the hardy. Less impressive is the sliding sofa bed that will get you grunting like a coal miner, and the fact that we managed to drain the main battery with limited use and no warning. A jump-start sorted that, as might a detailed study of the comprehensive manuals.

Of the two, the Marco Polo is easily the more civilised to live in and a fine machine in which to luxuriantly discover other worlds at a gentle pace. But the Mini’s top box is a terrific – if expensive – solution for more spontaneous adventuring and feels appealingly intrepid with it.

This article was originally published on 27 August 2017. We're revisiting some of Autocar's most popular features to provide engaging content in these challenging times.

With the size the mini is now

With the size the mini is now, I would have thought you could get a double bed in the back of it.......
justaviewman 27 August 2017

Too heavy for the roof !

I think that 200kg would be the limit to the Mini's roof bars. Two large people 15 stone plus would dent the roof and their wallets !

I'm sure the Mini manual says 75Kg max load for the roof.  Even if this doesn't apply when static I'm not sure 2 fat lads would do it much good.....