BACK TO ALL NEWS
Currently reading: Mercedes-Maybach G650 Landaulet: we take a ride through the African wild
UP NEXT
New 2026 Polestar 6 confirmed as 874bhp evolution of O2 concept

Mercedes-Maybach G650 Landaulet: we take a ride through the African wild

Mercedes' 38-year-old G-Class gets one final hurrah in the shape of a semi-convertible Maybach. We sit in the passenger seat on a ride through an African game reserve
Open gallery
Close

We take it for a ride in its natural habitat - the wilds of Africa - although in reality, it’s much more likely to be seen on the dunes of Dubai.

We are driving through the Madikwe Game Reserve in South Africa, where you'd normally only see a handful of Toyota Land Cruisers heaving with tourists. But instead of the Japanese four-cylinder diesel, we're taking on this tricky terrain in the G650 Landaulet and its six-litre V12 twin-turbocharger with 621bhp and 738lb ft of torque.

The G650 has all the technology of the Mercedes-Benz G 500 4x4² - and more. That includes portal axles, electronic dampers and a track widened by 25cm. The wheelbase has also been lengthened by nearly 60cm to create a lounge-like area in the rear seats. 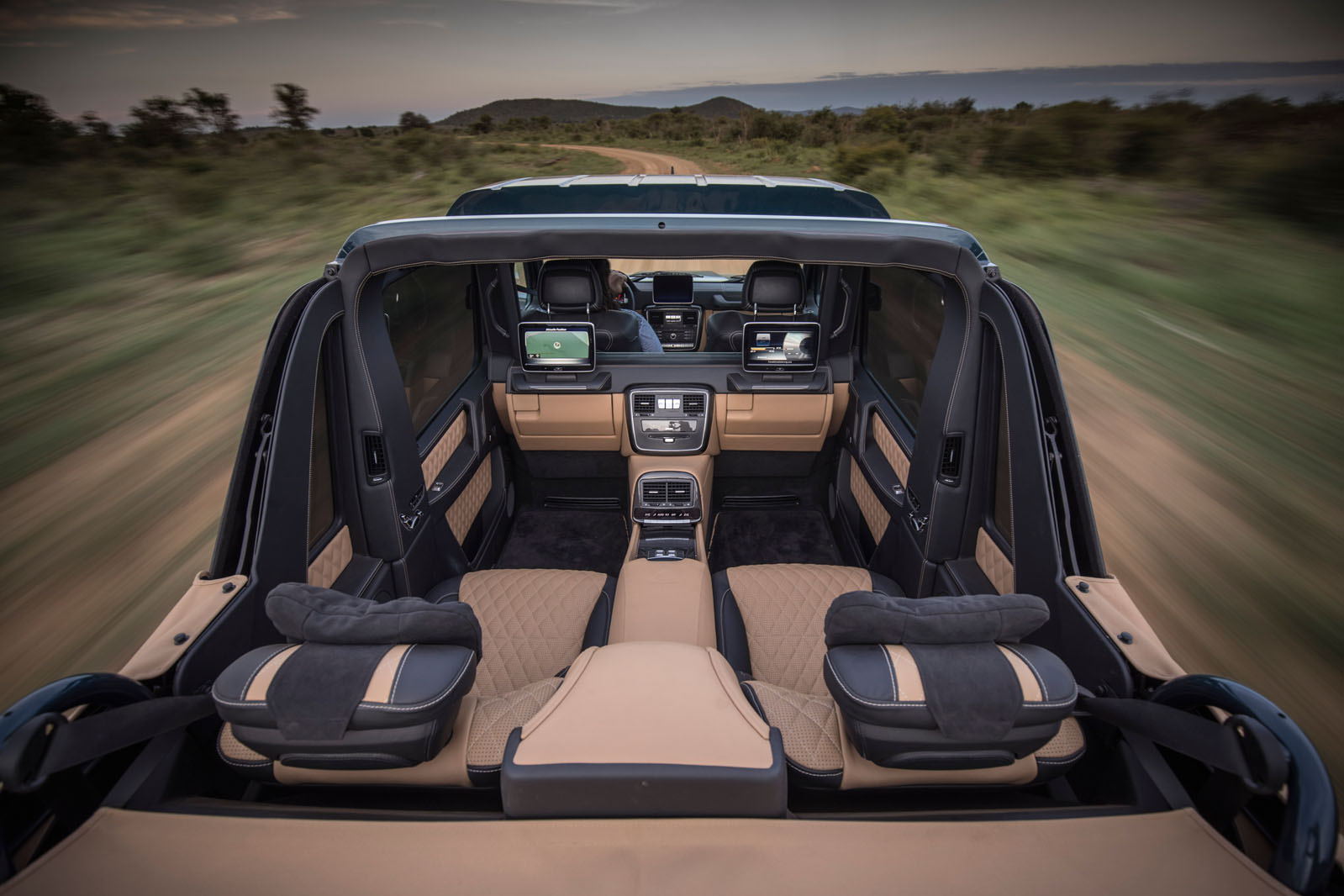 As well as portal axles to take on the toughest of terrain, the car also has hardcore off-road 325/55 R 22 tyres and ground clearance of almost 0.5m.

The 3.3-ton colossus can easily climb all the way to the summits, but more spectacular are its two rear seats with their landaulet roof. The seating itself is familiar, from the Mercedes-Maybach S600 saloon, but the retractable roof is the real novelty. With the touch of a button, the rear seats can be in open air in around 30sec.

"The roof is the one from the former G-Class Cabriolet," says G-Class model manager Dr Gunnar Güthenke. "We also have an extended wheelbase of 3.43m. For the rear passengers, there are massage seats, a separate climate control and the complete infotainment system of the current S-Class."

With a push of a button, the comfortable seats move into a bed position, akin to those in first class on an airliner. 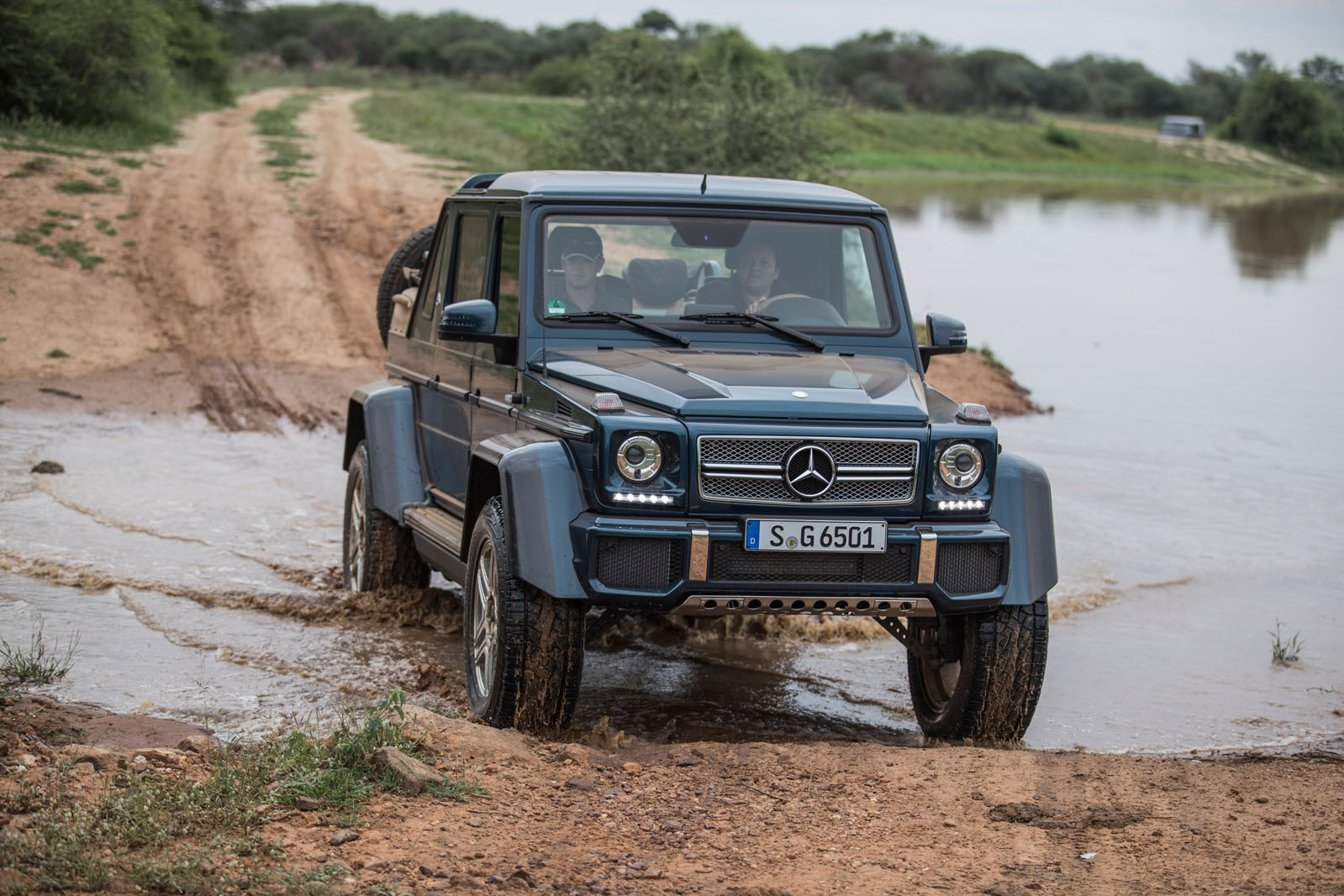 The G650 drives effortlessly through the hardest off-road terrain. Rubble, deep water passages and soft sand dunes are no problem at all. With all that in mind, it‘s not surprising that most customers will probably come from the United Arab Emirates (UAE) - and that the vehicle will join many a billonaire’s fleet. "We have created something unique with the vehicle," says G-Class marketing manager Ian James, "by combining an off-roader like the G-Class with a landaulet body."

There will be no right-hand-drive versions, and these special Mercedes are not legally allowed on US roads. But, really, the road isn’t the place for it. It’s limited to 112mph, and at over 60mph when the roof is open, the wind really blows in the rear seats. Better drive back into the game reserve.

Read our review of the Mercedes-AMG G63 6x6

That's all I have to say. Wouldn't care if you did that trip in a Holden Barina.
Turman 14 February 2017

its like something you would buy your kids from Toys'R'Us to sit Barbie and Ken in..
View all comments (5)