BACK TO ALL NEWS
Currently reading: Mercedes-Maybach G650 Landaulet arrives as swansong to current G-Class
UP NEXT
Tesla to expand select UK Superchargers to other electric vehicles

The Mercedes-Maybach G650 Landaulet, a range-topping version of Mercedes' G-Class, has made its public debut at the Geneva motor show.

It will act as a farewell to the current-generation model when it goes on sale later this year.

The plush four-seater military-grade SUV is the latest in a burgeoning number of high-priced models from the German car maker’s revived Maybach sub-brand.

The 621bhp twin-turbocharged 6.0-litre V12 powered limousine-cum-off-roader foreshadows the launch of a heavily upgraded version of the 38-year-old G-class later this year. It features a semi-convertible roof structure similar in style to that adopted by the Maybach 62 Landaulet launched in 2007.

Read more: we take a ride in the G650 Landaulet 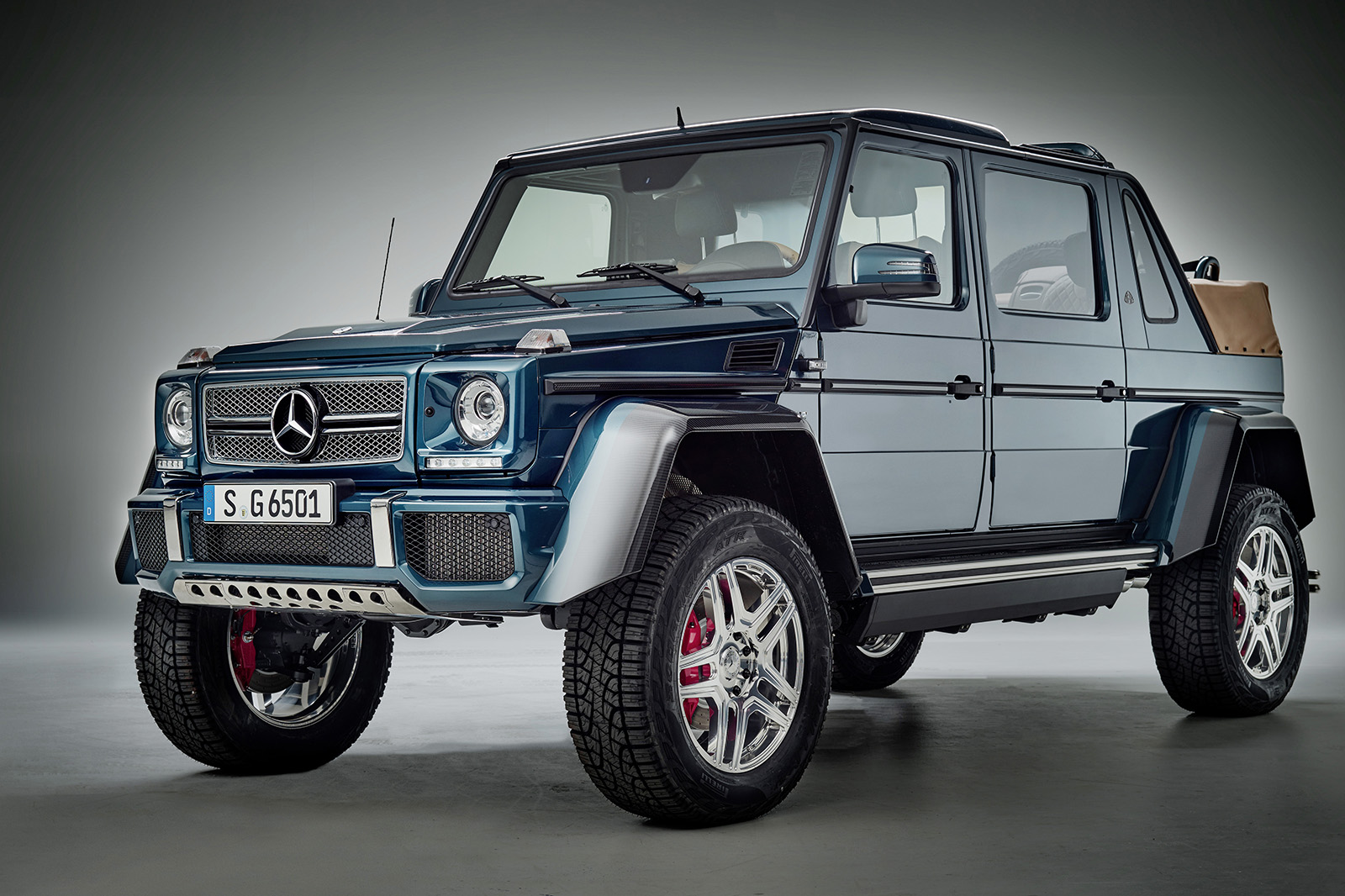 Based around the long-wheelbase G-class with the widened body, modified running gear and portal axle chassis from both the G63 6x6 and more recently introduced G500 4x4², the four-door G650 Landaulet stretches to 5345mm in length, 2110mm in width and a generous 2335mm in height.

The fifth in the current range of Maybach models also rides on a wheelbase of 3428mm – or some 258mm longer than the long wheelbase S-class, which forms the basis of similarly luxurious Mercedes-Maybach S65.

Entry to the G650 Landaulet’s leather-lined cabin is via a running board, which hinges from underneath the doors. Inside, the latest member of the Maybach line-up provides seating for four, with the electronically adjustable individual rear seats borrowed from the S-class mounted well back to free up legroom. 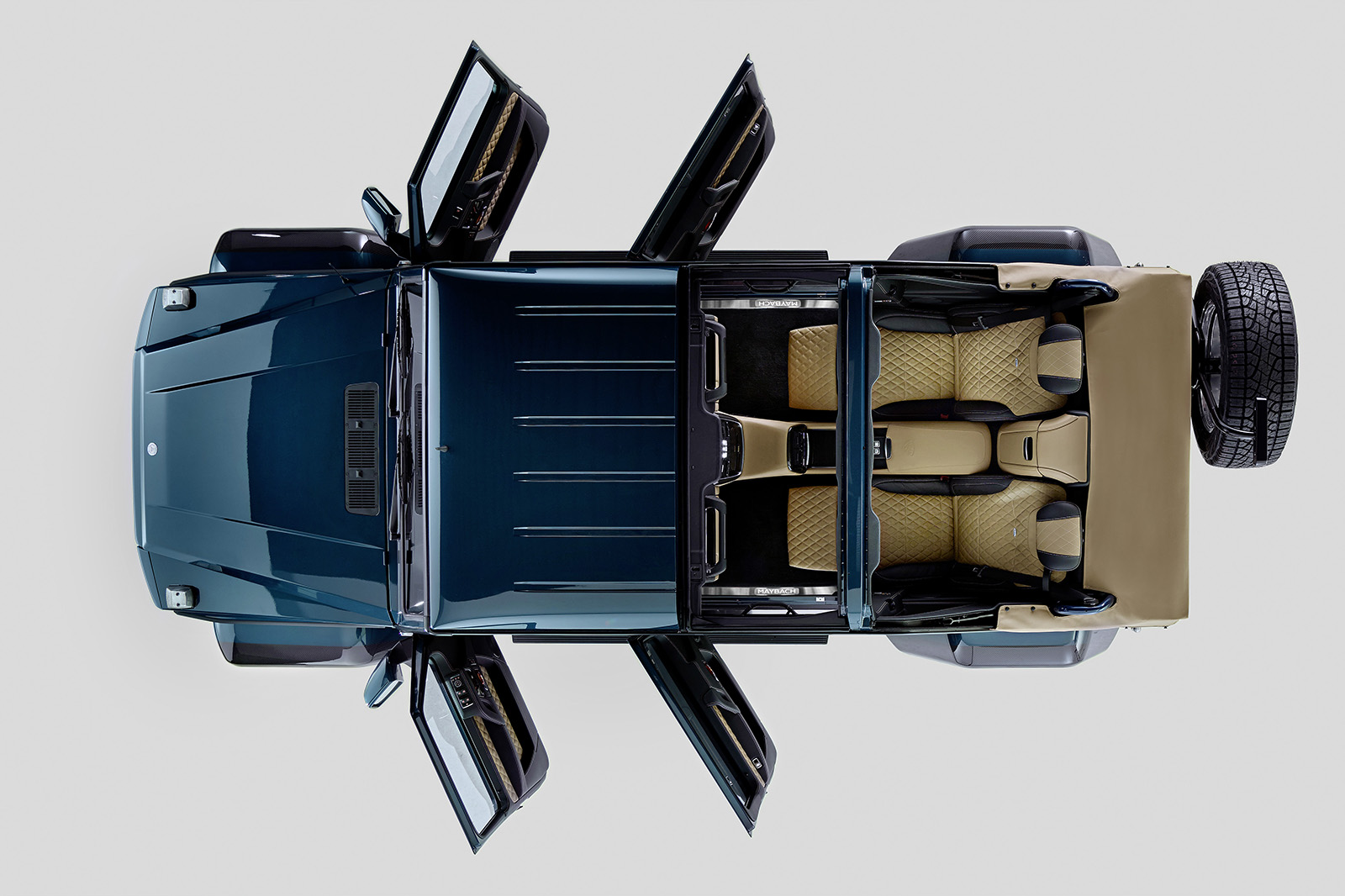 While the driver and front seat passenger are accommodated under a fixed steel roof, the rear seat passengers can choose to go top down; at the press of a button the fabric rear section retracts back and stows behind the rear seats above the luggage compartment.

In keeping with the limousine roots of the Maybach brand, there’s also an electrically operated glass partition separating the front section of the cabin from the rear, which can be changed from transparent to opaque. Additionally, the individual rear seats, borrowed from the S-class Pullman with inflatable air chambers and hot stone massaging function, can be set to a fully reclined position. There are also retractable tables integrated in the rear middle console, while the an additional cross member, used to hold the glass partition, houses two 10.0-inch monitors as part of a comprehensive infotainment system.

Power for the G650 Landaulet comes from the same twin-turbocharged 6.0-litre V12 petrol engine used by the G65, with 621bhp at 5000rpm and vast 737lb ft of torque between 2300 and 4300rpm. The heady reserves are sent through a standard seven-speed torque converter equipped automatic gearbox featuring a separate transfer case with low range gearing and a heavy duty four-wheel drive system featuring three separate differential locks, which can be engaged on the move. 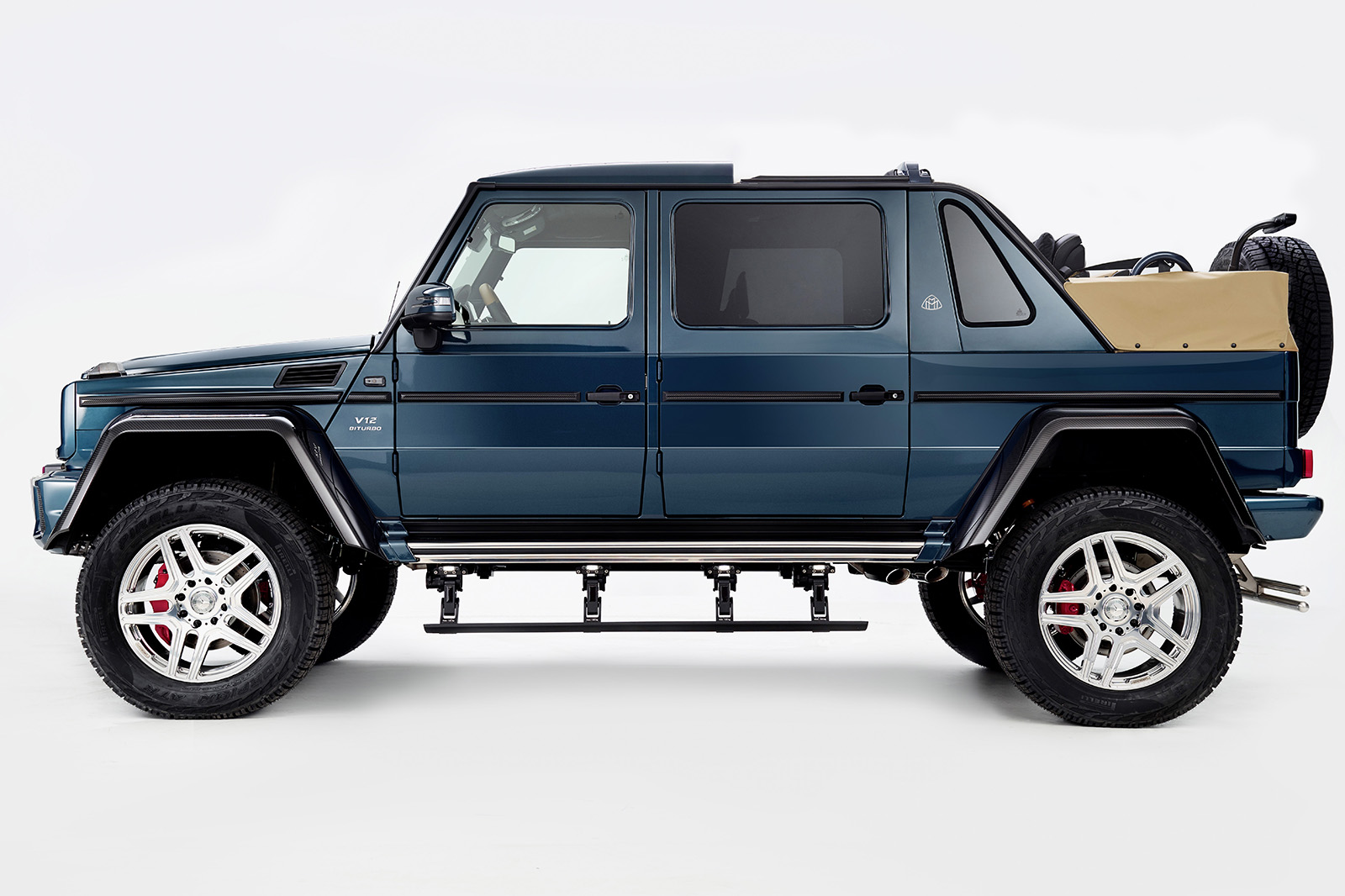 No performance claims for the G650 Landaulet have yet been revealed, though the more on-road biased G65 dispatches 62mph from standstill in 5.3sec on boasts an electronically limited top speed of 143mph.

Reflecting the G-class’s off-road heritage, the G650 Landaulet receives a heavy duty portal axle chassis originally developed for the G63 6x6 and also used by the G500 4x4²; the wheels are not mounted at the same height of the axle but rather situated lower owning to the adoption of portal transmission at each end, providing the new Maybach with huge 450mm of ground clearance and allowing the fitment of 22-inch wheels shod with 325/55 profile tyres as standard..

Set to be produced in a limited run of 99 at Magna Steyr’s manufacturing facility in Graz, Austria, the G650 Landaulet is described as the most expensive G-class model yet. Pricing is yet to be announced, though officials say it will top that of the G63 6x6, which was also offered in limited numbers at a starting price of €480,000 back in 2014.

Beyond stupidity why Mercedes persist with these overpriced G-Wagen's is beyond me,what these tasteless overpriced vehicles do to the Mercedes "Brand Values" is beyond me.
ianp55 13 February 2017

Beyond stupidity why Mercedes persist with these overpriced G-Wagen's is beyond me,what these tasteless overpriced vehicles do to the Mercedes "Brand Values" is beyond me.
bomb 13 February 2017

"Mercedes-Maybach G650 Landaulet to act as swansong to current credibility."
View all comments (10)