BACK TO ALL NEWS
Currently reading: Mercedes-Benz EQG concept to become electric G-Class by 2025
UP NEXT
Spending 48 hours touring in a Ferrari Roma

The Mercedes G-Class will gain an electric variant by 2025 in the rugged SUV’s most radical transformation since it first appeared in 1979.

As scooped by Autocar, the EQG will be a close visual relation to the current internal combustion-powered car but with a raft of styling revisions that bring it into line with Mercedes’ new EQ line of electric cars.

It has been previewed at Munich in the form of the Concept EQG, which is described as a near-production study.

Munich motor show 2021 live: all the new cars and updates

The makeover is subtle, extending chiefly to illuminated trim elements, a solid panel with a 3D star pattern replacing the front grille, bespoke 22in aluminium wheels and a storage box in place of the spare-wheel-carrier, designed to look like a wallbox charger.

Mercedes draws attention also to the Concept EQG’s roof rack, which houses a bright LED strip along its front edge to hint at the potential for this electric G-Class to undertake “demanding off-road adventures”. 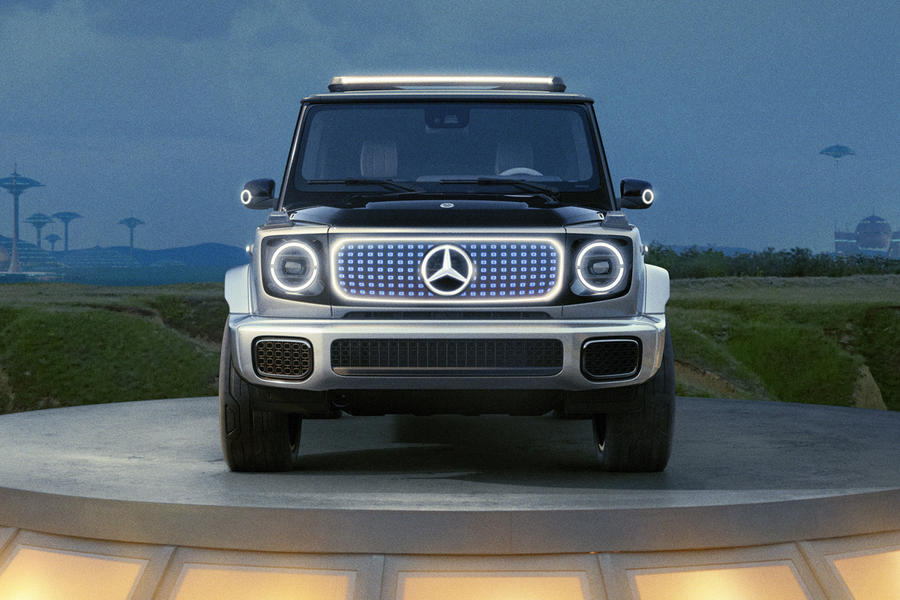 Underpinned by the same ladder-style chassis as the G-Class with independent suspension at the front and a rigid rear axle, the EQG is “an uncompromising off-roader”.

The instant torque provided by electric motors will give the EQG “enormous pulling power and controllability”, making it perfect for tackling steep inclines and rough terrain and towing heavy loads. Mercedes has hinted that this quad-motor powertrain will be carried over into production.

The battery is integrated into the ladder frame to ensure a low centre of gravity. The EQG will take on the firm’s “legendary” Schöckl mountain testing track in prototype guise ahead of its final unveiling.

The current W463- generation G-Class is sold under the “Schöckl proved” banner with reference to its off-road ability.

At this concept stage, Mercedes hasn’t revealed the EQG’s battery capacity, range or performance data, but it will no doubt eclipse the performance of the V8-powered AMG G63, which with 577bhp and a 0-62mph time of 4.5sec is the most powerful and fastest version of the G-Class yet produced.

“We want to inspire our customers to switch to electric mobility with convincing products,” he said. “An icon like the G-Class fulfils this task perfectly.”

leave the G-Wagen alone.....soon there will be synthetic fuels to utilise.

'Massive/Instant torque', may be useful rock climbing in Utah, or Dune bashing in Dubai, but it is a liability in Snow/Mud.

I cant understand why you would build a hard-core 4x4 without a spare wheel either!

If there are 4 individually controllable wheel mounted motors, where is the two speed gearbox going?