BACK TO ALL NEWS
Currently reading: Mercedes-AMG reveals new PHEV tech, promising 800bhp-plus
UP NEXT
New 2023 Porsche 911 GT3 RS is "most track-focused" ever

The new PHEV drivetrains, part of what AMG calls its e-Performance strategy, are based on the German car maker’s existing twin-turbocharged 4.0-litre V8 and a newly developed longitudinally-mounted version of its turbocharged 2.0-litre four-cylinder petrol engine – the M177 and M139 as they are respectively codenamed, both mated to a nine-speed AMG torque converter equipped MCT-Speedshift gearbox.

In an electrification process aimed at increasing their reserves while providing added efficiency for lower average CO2 emissions, the AMG combustion engines are combined with an electric motor integrated into the rear axle assembly.

The asynchronous unit, which provides a continuous 94bhp but has been developed to provide peak power of up to 201bhp along with 221lb ft of torque at a maximum 13,500rpm in more performance orientated driving modes, provides drive primarily to the rear wheels and, if necessary, to the front wheels for short periods via a carden shaft. 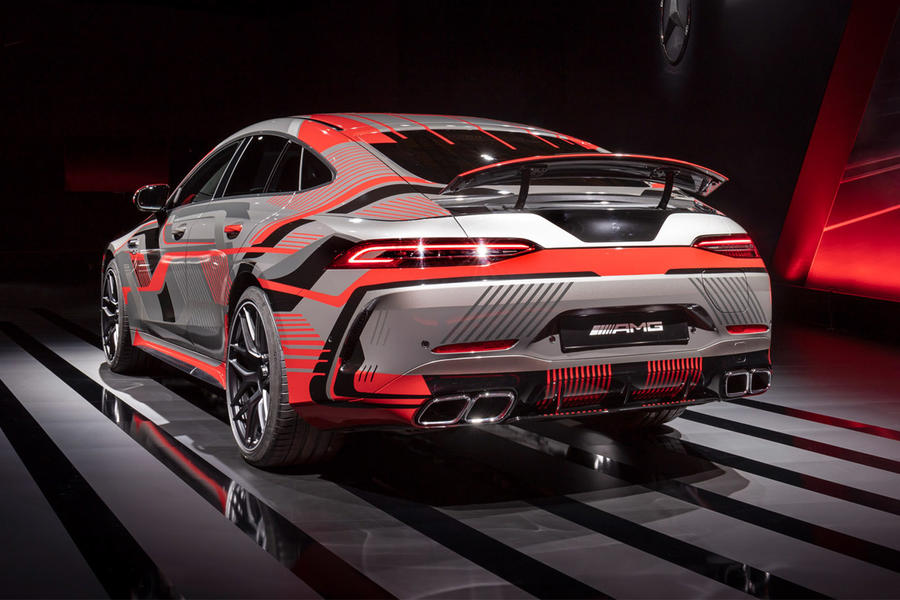 The new driveline architecture, originally hinted to on the Mercedes-AMG GT concept car revealed at the Geneva motor show in 2017, departs from the arrangement used by standard Mercedes-Benz PHEV models, which employ an electric motor integrated in the front of the gearbox housing, contributing to a more favourable front-to-rear weight distribution that AMG says is crucial to its future e-Performance models retaining the handling properties of its existing combustion engine line-up despite an average 200kg increase in kerb weight model-for-model.

It also allows a higher combined torque rating as the electric motor operates independently to the nine-speed gearbox used by the combustion engine with its own two speed unit.

Electrical energy used to power the electric motor is stowed in a 400-volt 6.1kWh lithium-ion battery that uses cylindrical cells for compact packaging. Developed in partnership with British-based High Performance Powertrains – the Mercedes-AMG owned company responsible for much of the engineering of the company’s F1 race car drivetrains, it is claimed to weigh 89kg.

AMG says the new gasoline-electric drivetrains are planned for several models in what it describes as “various expansion stages”. 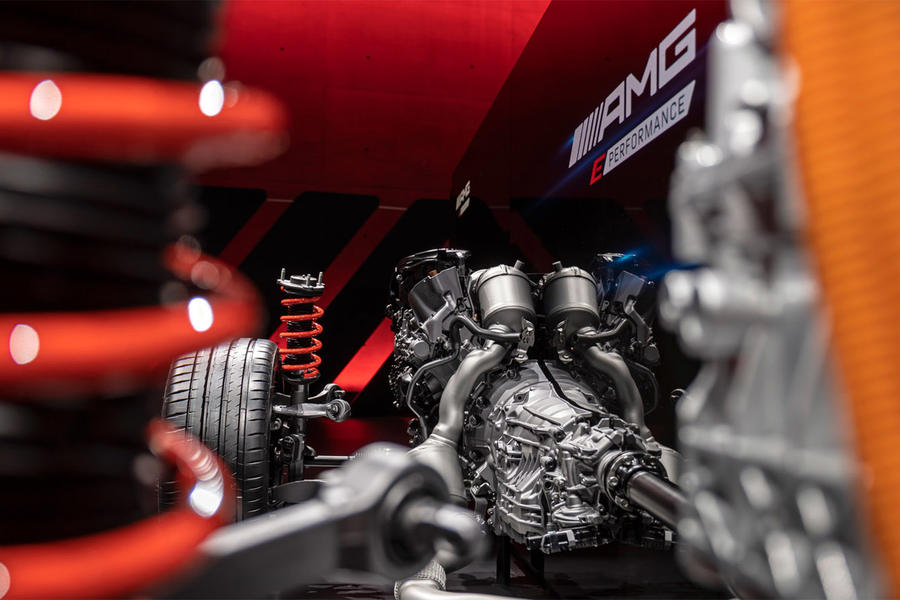 The V8 engine based PHEV powerplant, which will first appear in the GT73e 4Matic 4-door due to see UK sales later this year, is claimed to develop over 804bhp and more than 738lb ft of torque – sufficient, according to preliminary data released by AMG, to provide the Porsche Panamera SE-Hybrid rivalling sedan with 0-62mph acceleration in 3.0sec.

Further models set to receive the V8 PHEV unit include the yet to be official confirmed S73e 4Matic and SL73e 4Matic.

The four-cylinder PHEV drivetrain will debut on the successor to the C63 4Matic as the C63e 4Matic in early 2022. Its combustion engine adopts a new electric turbocharger to develop up to 443bhp and 4420lb ft of torque. In combination with the same electric motor and battery used by its V8 PHEV sibling, it is claimed to offer over 503bhp and 516lb ft of torque.

AMG is yet to reveal the electric range of its new PHEV drivetrains. But while emphasizing the focus is more on performance than zero emission distance capability, it does suggest short distances will be possible on the power of the electric motor and battery alone.

The new AMG drivetrain recovers kinetic energy on the overrun and under braking in four stages; Level 0, 1, 2 and 3 – selectable by the driver via the right-hand-side steering wheel button. In Level 3, the generator is capable of capturing up to 90kW of electrical energy.

The E Performance PHEV models will serve as a precursor to a range of pure-electric AMG cars based on Mercedes’ EQ models. Described as electric equivalents to today’s 43- and 53-badged models, AMG’s EVs will adopt the traditional performance-inspired styling cues, have bespoke interior elements and use a dual-motor, four-wheel-drive powertrain capable of torque vectoring and a sub-4.0sec 0-62mph time, depending on the model.

Why can't they drop this new hybrid V8 into the next C63 and detune it a bit (or a lot)? Buyers don't particularly want or need 800hp+, they want the sound and emotion of a V8, electrically assisted or not.

My biggest question is what they're going to do to make the new C63e sound decent. The A45 sounds terrible. I'd at least want something to sound like a 500 Abarth or R56 JCW. I want some rasp and burble. I hope they figure something out. Last thing I'd want is an £75,000 car that sounds like the A45.