McLaren has previewed some of the customisation options that will be offered to the 106 buyers of the upcoming 243mph-plus Speedtail hypercar, with a new teaser image showing an 18-carat white gold badge.

The Speedtail is the spiritual successor to the F1, which was released in 1993. Its twin-turbo V8 combusion engine will be augmented by an electric hybrid system for a combined power output in excess of 986bhp, far surpassing the F1's 627bhp.

Previously known by its BP23 codename, the Speedtail will have a higher top speed than any McLaren ever produced. The company has yet to confirm an official maximum speed but is aiming for a figure beyond the F1's 243mph.

Only 106 Speedtail models will be produced - and all have already been reserved, at £1.75 million (plus taxes) each. It will be officially revealed to owners in the coming weeks, with a public unveiling to follow on  26 October.

The newest teaser images focus on the car's badge, one of a number of custom options that buyers will be able to specify. The badge shown was made by Birmingham-based specialist jeweller Vaughtons, and combines 18 carat white gold with carbonfibre inlays using new Thin Ply Technology. The front badge weighs 100 grams, and will be offered as a set of three as one of the tailoring options.

McLaren previously released a teaser image showing the Speedtail's eponymous rear end, which suggests it will arrive with a distinctly different look from every other McLaren road car. With top speed being prioritised over lap times, it is unlikely to use the opinion-dividing additional aerodynamic upgrades found on the Senna hypercar.

McLaren said the name is “evocative of a peak speed higher than any McLaren yet and sinuous, highly streamlined design”. It also said that it will be “the most luxurious” McLaren so far. 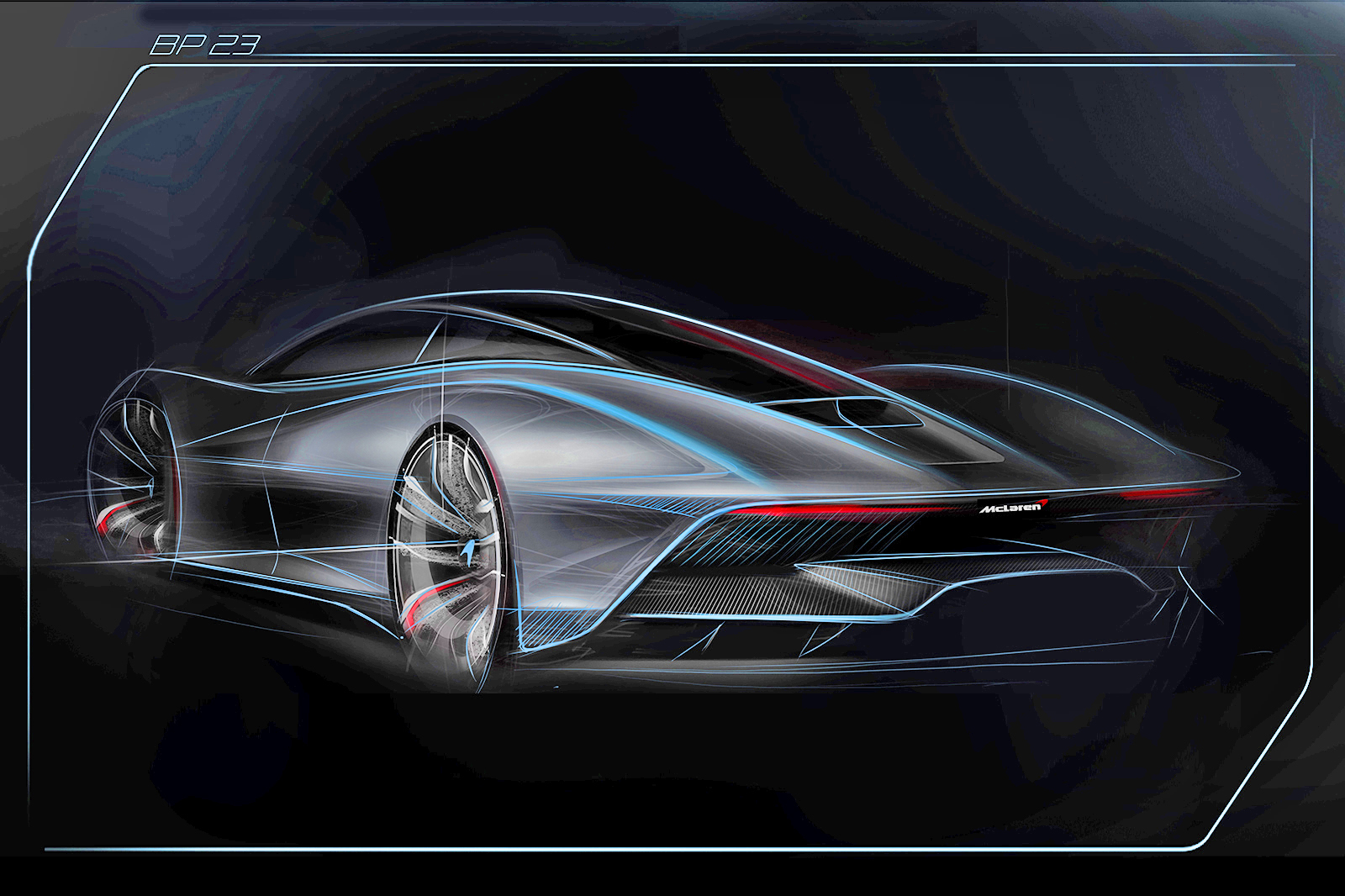 The Speedtail is the third car in McLaren’s top-tier Ultimate Series, following the P1 and the recently launched Senna. This new model features a centrally mounted driving position flanked by two seats, an arrangement inspired by the F1 road car.

McLaren boss Mike Flewitt previously told Autocar that the Speedtail was “a long way along” in terms of its development: “We’re running the powertrain in a 720S mule. We haven’t got a full-body prototype yet.” Production will begin in late 2019 at the McLaren Production Centre.

The rebirth of a three-seat McLaren originated with a single customer request, which McLaren decided could be put into limited-series production.

Each Speedtail will be personalised by McLaren Special Operations, the bespoke engineering division. 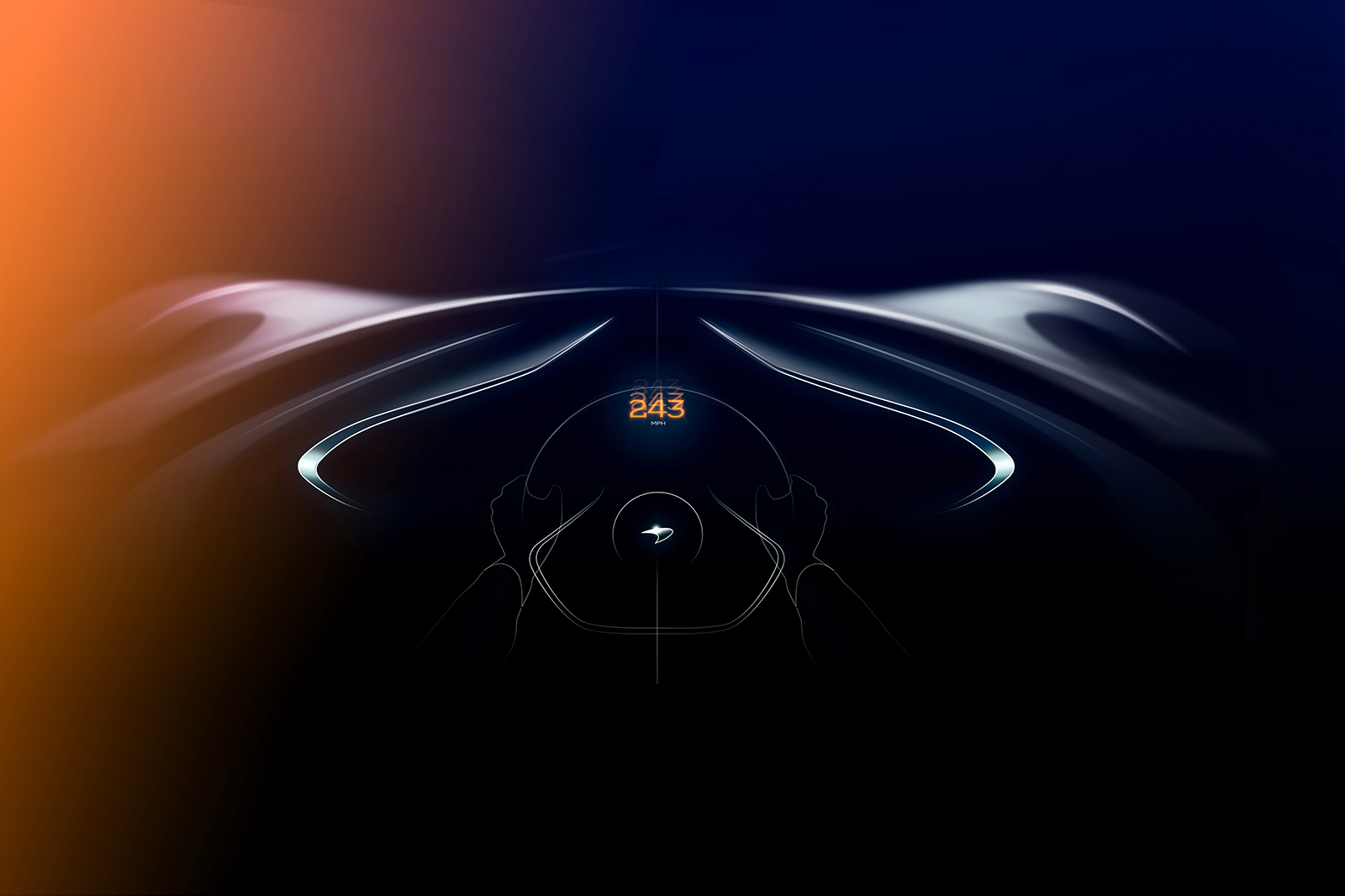 Unlike with the Senna and P1 – which are more track-biased than the Speedtail grand tourer – a GTR version of the Speedtail is not expected.

Interestingly, Flewitt said earlier this year: “It would be fascinating to do a centre-seat track car. It would be perfect on a track, and easier to do as you need all sorts of legislation on the road. It’s not planned, or been asked for. We’re not planning one but it’s been thought of. I’m surprised someone hasn’t asked MSO.”

McLaren confirmed at the Geneva motor show in March that the Speedtail will be the fastest McLaren made so far, exceeding the F1’s 243mph – at which point “it will still be accelerating”, said the car maker.

In 1998, the previous three-seat McLaren, the F1, became the world’s fastest production car when Le Mans winner (and now Bugatti test driver) Andy Wallace took the F1 along Volkswagen’s Ehra-Lessien test track in Germany and reached 242mph, exceeding the 231mph the F1 managed in 1993 at the Nardo high-speed bowl in Italy. 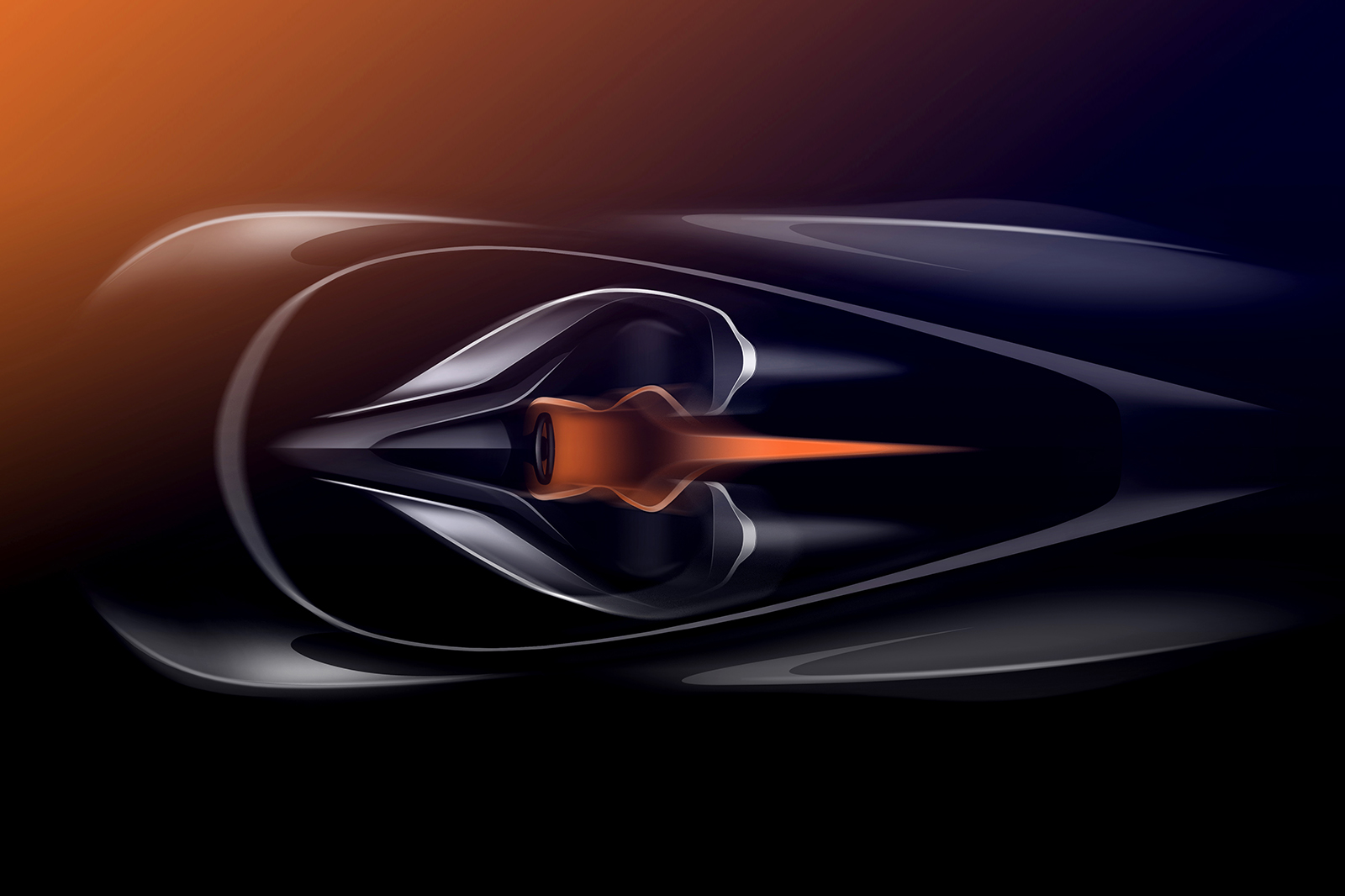 Andy Palmer, vehicle line director for McLaren’s Ultimate Series models, told Autocar at the time that the car’s advanced aerodynamics will help to “really move things on from an acceleration perspective”.

Unlike the Senna, however, the focus of the Speedtail won’t be on track performance. Instead, it will be pitched as a class-leading all-rounder in the hypercar segment.

If lap times aren’t the way McLaren will measure the Speedtail’s performance (and they’re not), that leaves acceleration or top speed as the two measures by which the Speedtail will be the fastest ever McLaren.

“It’s very powerful; more powerful than the [986bhp] P1 GTR,” Mike Flewitt told Autocar at the Geneva motor show. He also confirmed the car would be “easier to get into than an F1” and “feels very natural” when you drive it. 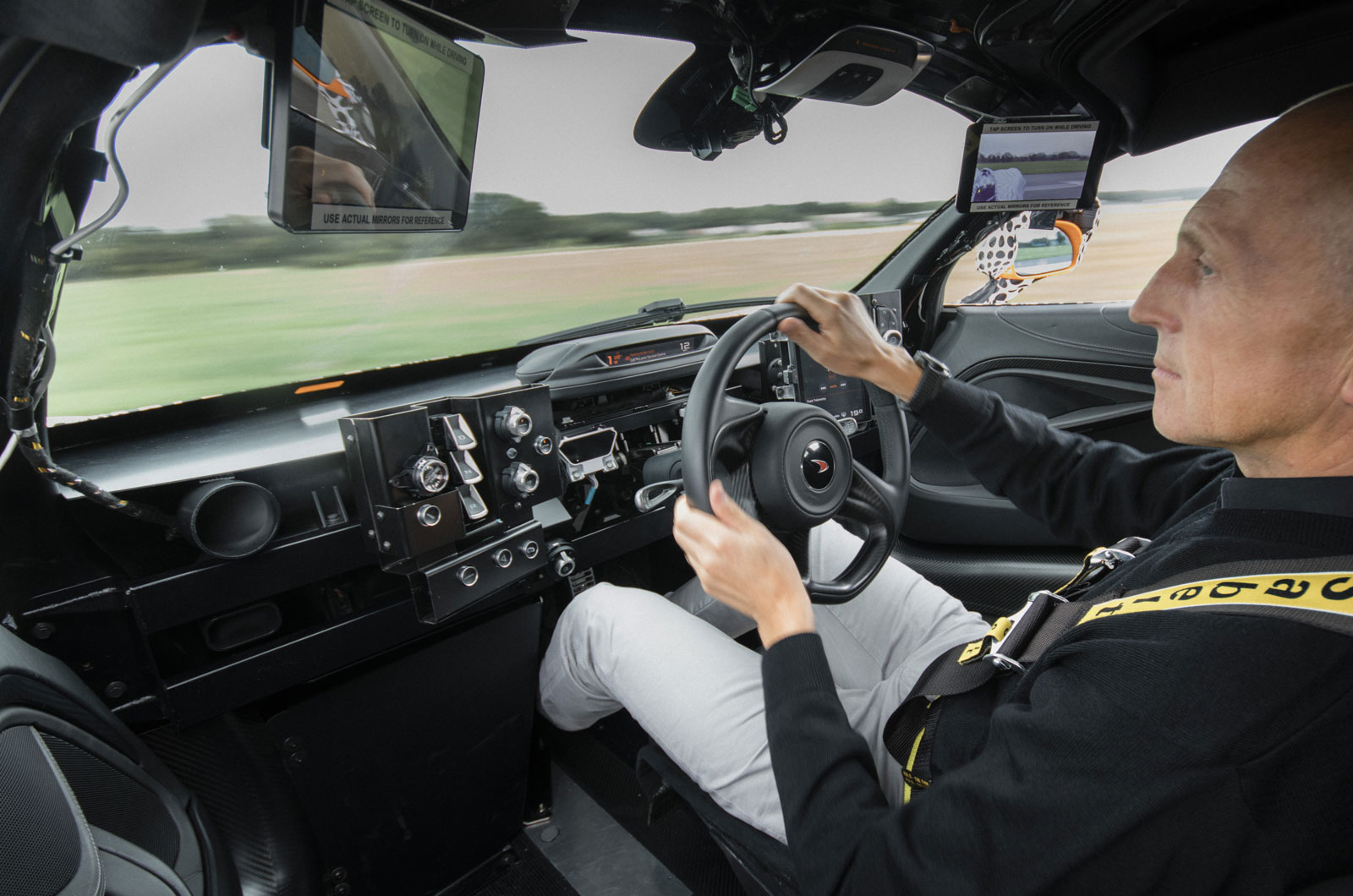 High power levels and the predicted high speeds don’t come without complications, though. Palmer admitted that McLaren is “pretty much at the limit of what tyres, as well as other systems, can do”.

The realities of running consistently at speeds approaching – or perhaps beyond – 250mph are a significant step onwards again from 200mph from a tyre, energy and aerodynamic perspective. Palmer revealed previously that the goal of this car is "to give customers the ability to have a high level of luxury, bespoke elements on the car, high performance, high speed – a very much road-focused grand tourer".

“The centre seat is an amazing thing,” Palmer told Autocar. “The attraction is not only the driving position, but you can take two passengers and luggage on a long journey. I’ve been sitting in the back and it’s not a bad place to be.

“Technology has moved on, particularly in carbon, and in our tub and monocell, and how we engineer that to accommodate three seats. It’s not without compromise – it’s not sitting in the back of a Mercedes S-Class – but it’s not a huddled or tight space.” Palmer and his colleagues say that entry and egress to the Speedtail is far easier than it was in the F1, too. Cameras might augment mirrors to increase visibility without compromising aerodynamics. 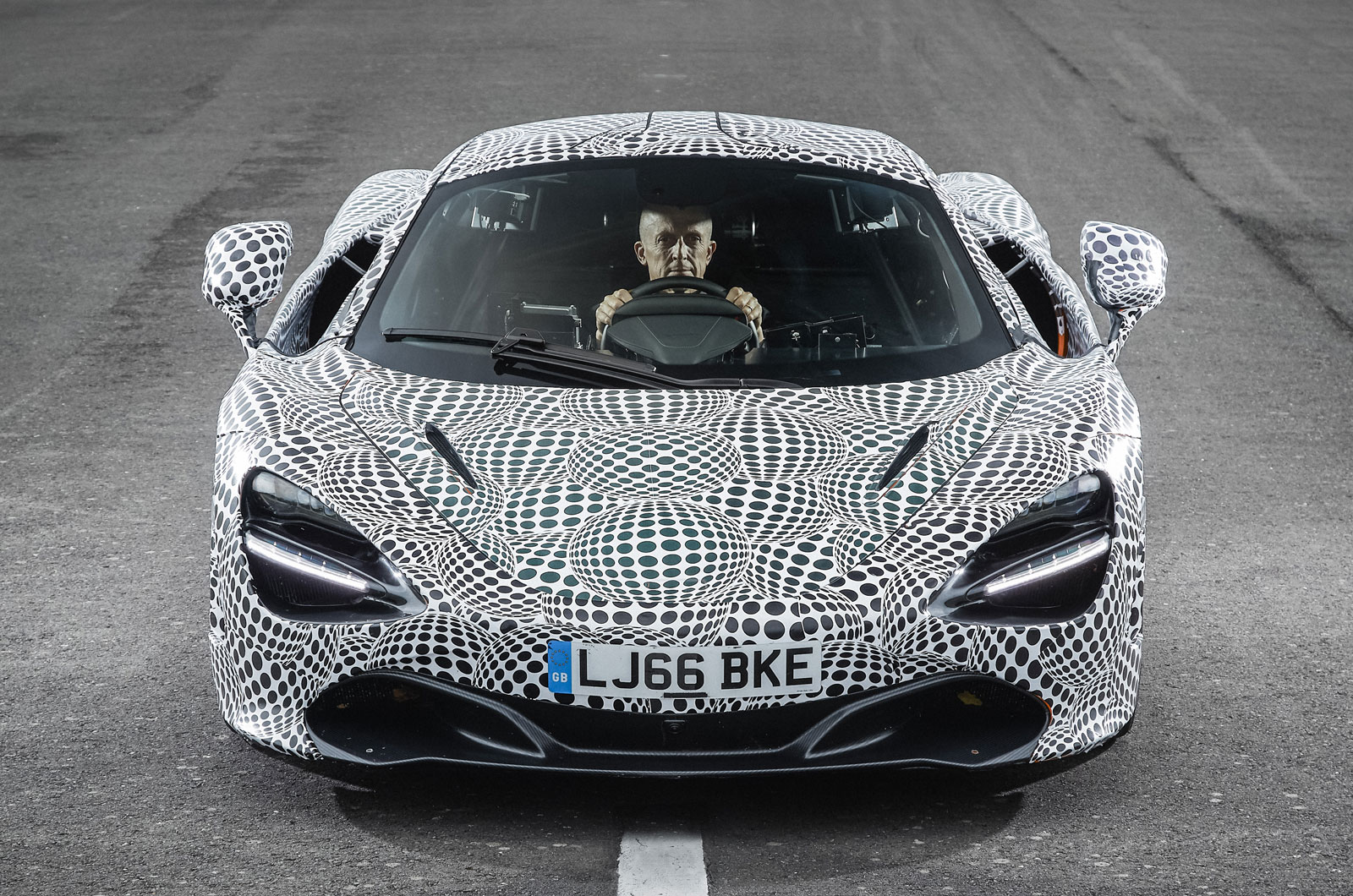 The dilemma of the Speedtail’s high-speed runs

Another of McLaren’s headaches, though, is deciding where to complete the Speedtail’s high-speed runs, which have already been planned into the development process. Using VW’s Ehra-Lessien test track – which has a five-mile main straight that you can enter off a curved bend at an easy triple-figure speed – is out of the question 20 years on from the F1, given VW has competing brands and it’s where the Bugatti Chiron will eventually prove its top speed.

High-speed test track ‘bowls’, meanwhile, even like the one at Nardo that scrubbed 10mph from the F1’s pace, prevent cars of the Speedtail’s potential from reaching their top speed. Palmer says he “would like to run on Tarmac”, but beyond some of the world’s longest runways, or some road race events where the safety of drivers becomes an issue should anything go wrong, McLaren might even have to look to salt flats such as those at Bonneville. Even there, though, tyres become an issue, because of the lower grip levels. And while Bugatti can use Ehra-Lessien for customer events, McLaren will have to think where its 106 Speedtail buyers can experience close to their car’s full potential.

Additional reporting by Matt Prior

McLaren hyper-GT to be more powerful than P1

McLaren to usher in new breed of hybrid and autonomous cars

that ‘teaser’ of the nose and badge has got to be the dullest teaser pic ever. Intrigued and excited by the actual car though.

Google, Try it, rather than making yet another inane comment.

Yes, why don’t they get on with it?... I mean, How hard can it be to deal with centripetal forces caused by around 90 revolutions per second and frictions of rim on tyre bead and tyre on tarmac and the subsequent heat generated, in turn affecting pressure within the tyre. Laziness is clearly all that’s holding them back...