BACK TO ALL NEWS
Currently reading: McLaren 600LT is faster than 488 GTB, plus exclusive pictures
UP NEXT
New 2021 Citroen C5X revealed as luxury range-topper

New Longtail model can also beat its higher-ranking sibling, the 675LT, on some tracks; it's taken to the Goodwood hillclimb for its first outing
Share
Open gallery
Close
Share story

The McLaren 600LT, the most performance-focused Sports Series model yet, can beat its higher-ranking sibling, the 675LT, on lap times at certain circuits, according to the brand.

While straight-line performance does not quite match the 675LT, it is “a margin faster” on some tracks. That is largely due to cornering speeds that are claimed to exceed those of the 675LT, thanks in part to Pirelli P-Zero Trofeo R Tyres bespoke to the 600LT.

What will the McLaren 600LT be like to drive? 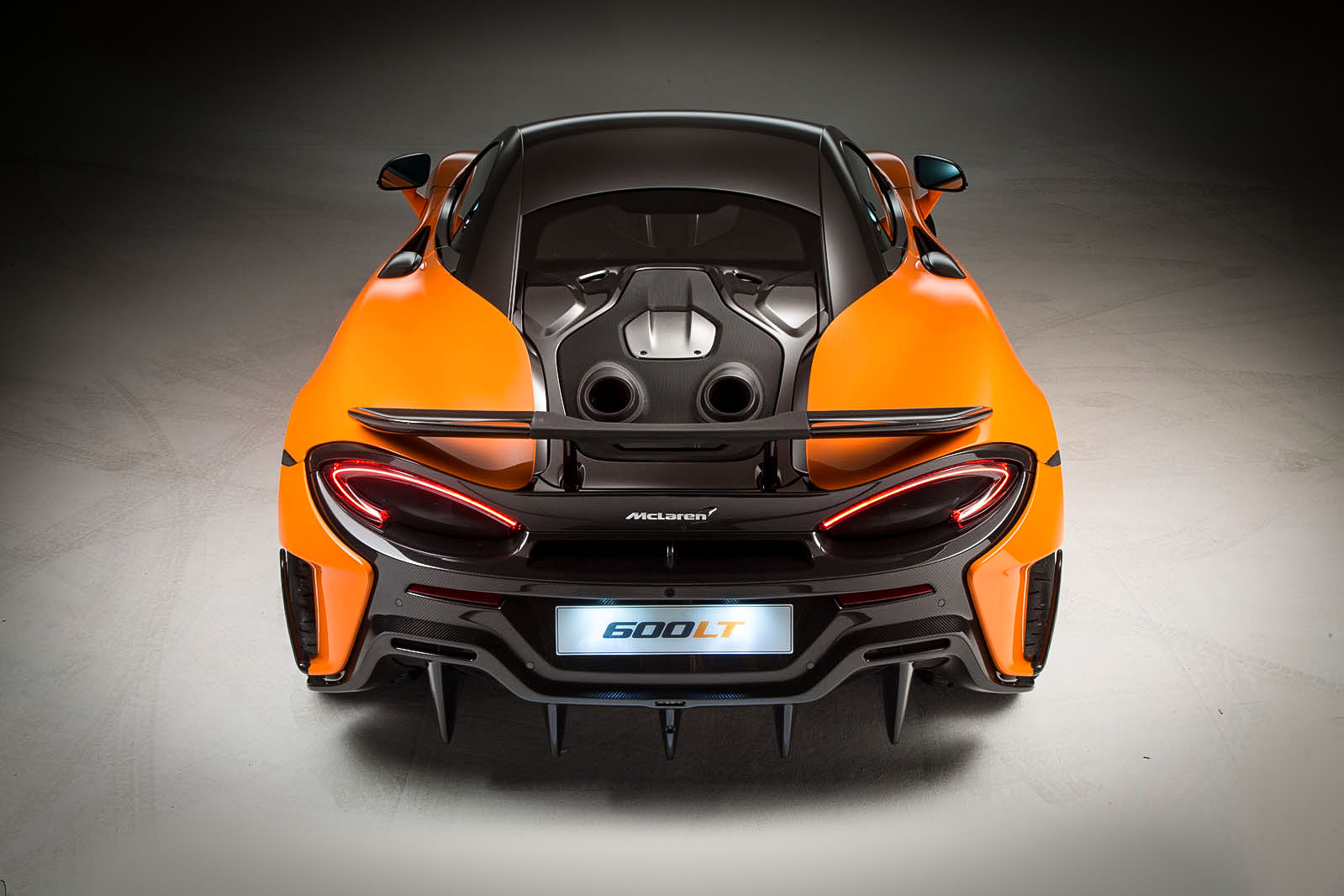 The 600LT was revealed late last month ahead of its Goodwood Festival of Speed debut, and now McLaren has announced more details, including highly anticipated performance figures. 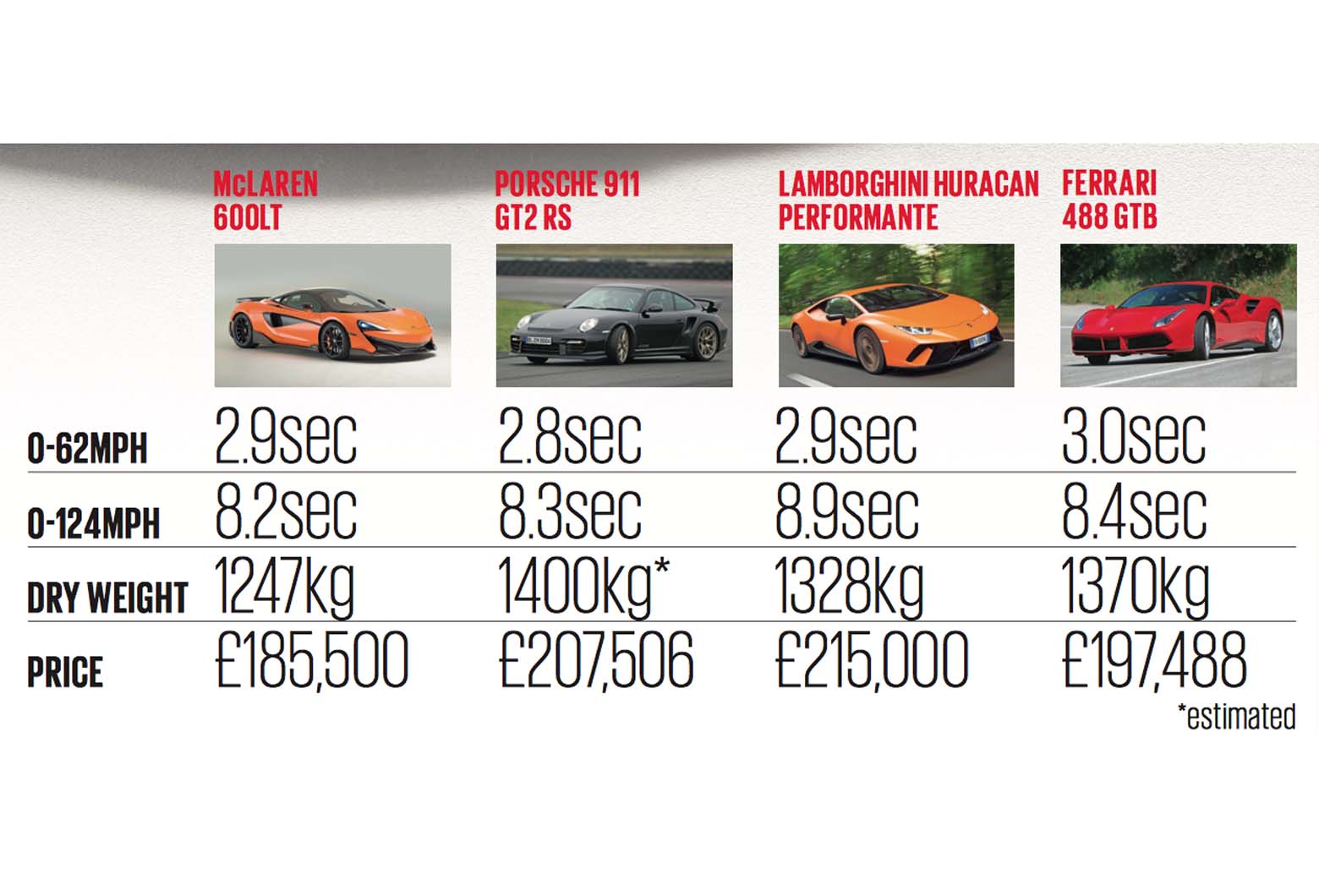 The £185,500 limited-edition model will be followed by a Spider version in 2019, McLaren has confirmed, in a similar vein to the 675LT and 675LT Spider. Goddard said the Spider variant is “well into development”.

He added: “In fact, it’s very close to where we are with the standard 600LT. The majority of its components are in common with the 600LT — other than the roof, obviously. It’s testing on track right now.”

The 600LT is a final hoorah to the current generation of Sports Series models before it is replaced in 2020. It is the fourth McLaren car to get the ‘Longtail’ name following the F1 GTR Longtail race car, 675LT coupé and Spider. It is described by McLaren as the “fastest, most powerful and most track-focused — yet road legal — Sports Series” made yet. 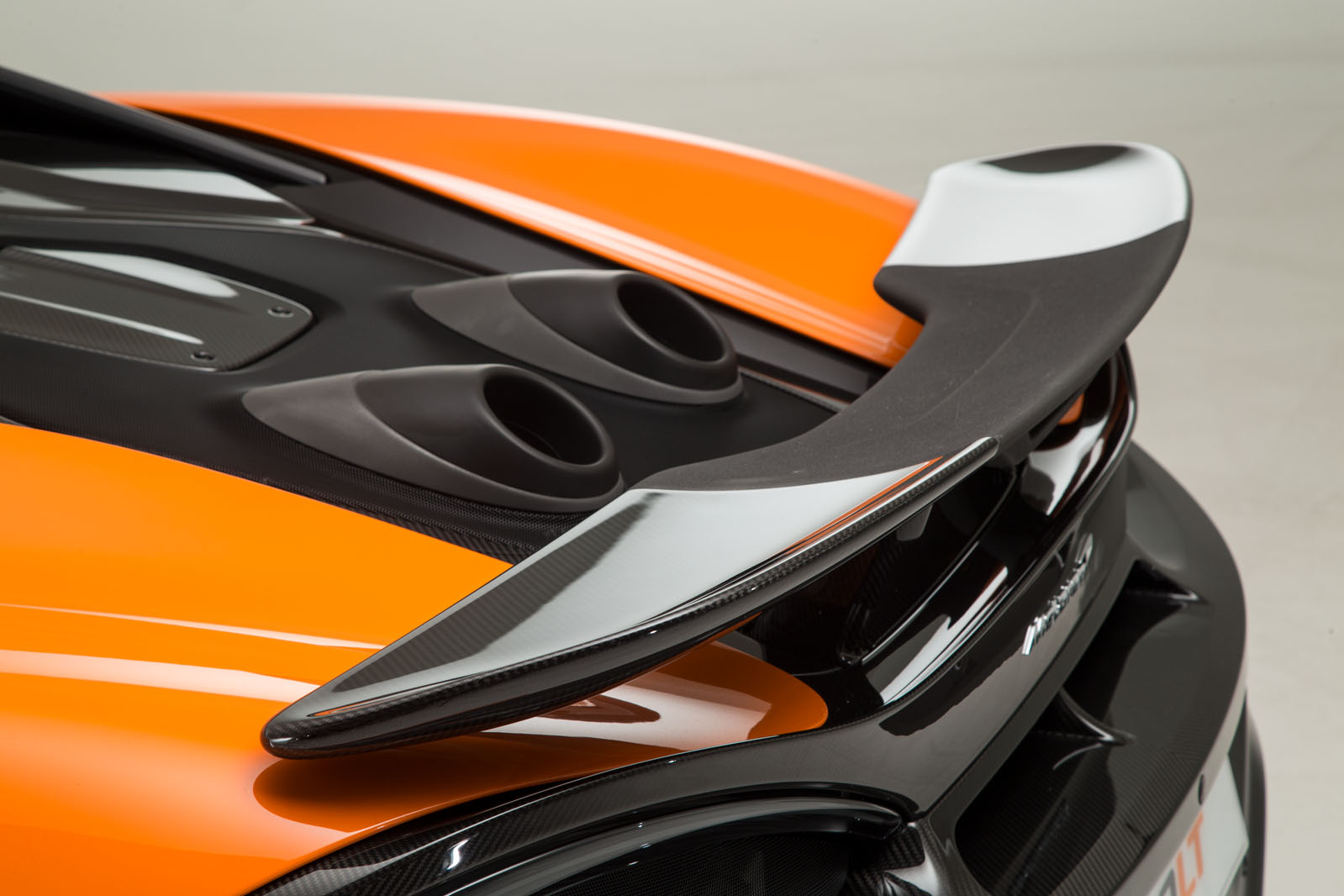 McLaren boss Mike Flewitt said: “The McLaren F1 GTR Longtail was one of the purest race cars in modern motorsport history. The 675LT resurrected the revered name, creating the purest distillation of the sheer driving pleasure embodied by all McLaren cars.

“Now, we are further extending our very special LT family — albeit in limited numbers — and once again showcasing the ethos of optimised aerodynamics, increased power, reduced weight, track-focused dynamics and enhanced driver engagement that are hallmarks of a McLaren Longtail.” 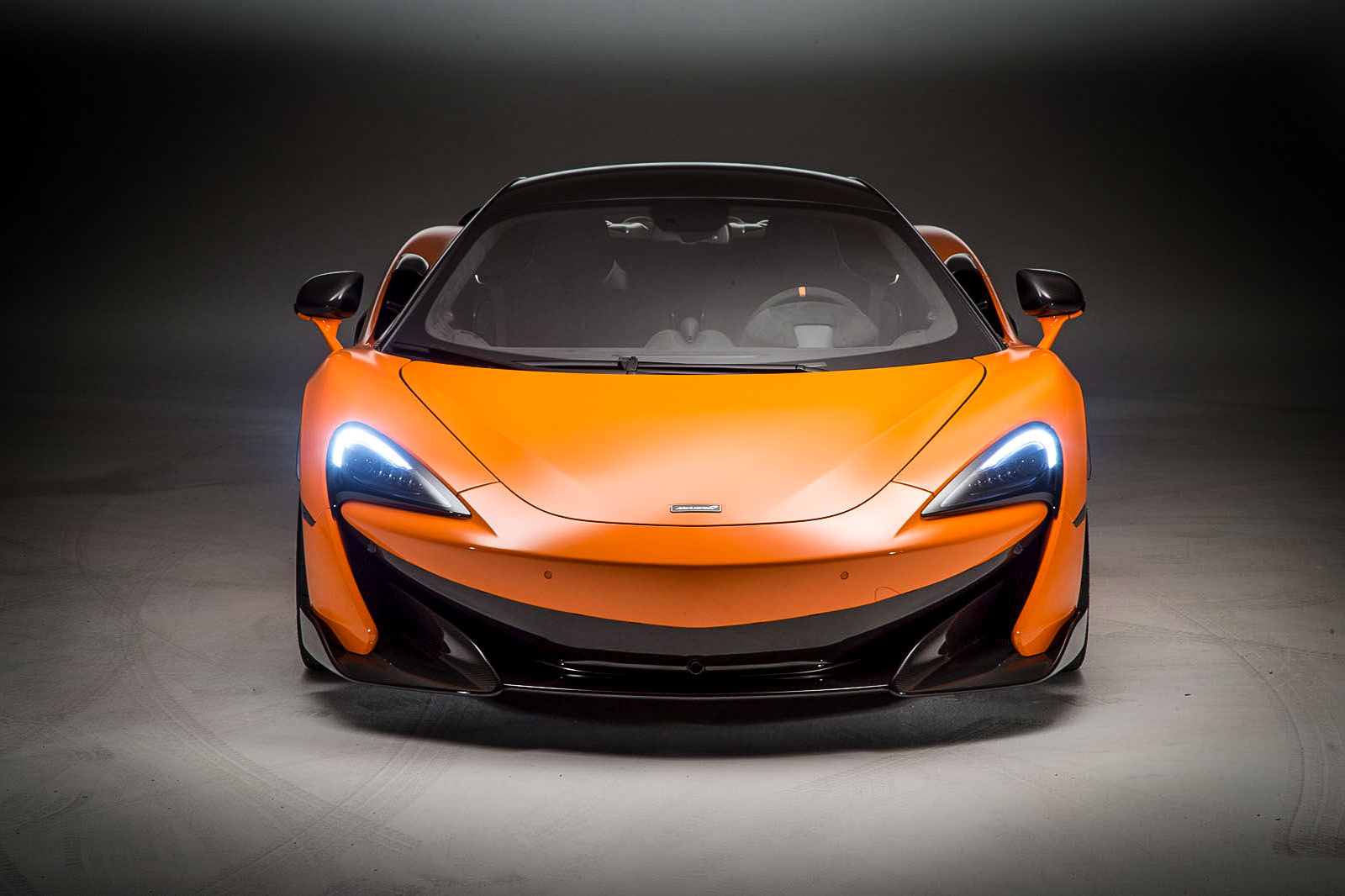 At its lightest, the 600LT has a dry weight of 1247kg and is 100kg lighter than the 570S when optional super-lightweight seats — carried down from the Senna hypercar — are fitted.

The 600LT’s biggest weight savings over the 570S are: standard seats (-21kg), wheels including Trofeo tyres (-17kg) and air conditioning removal (-12.6kg). Goddard said: “The car loses some practicality to lose weight. For example, there’s no glovebox. But the model can still be used every day.” Another example is the door bins, which have been removed and replaced by netting, ensuring the space is still usable. 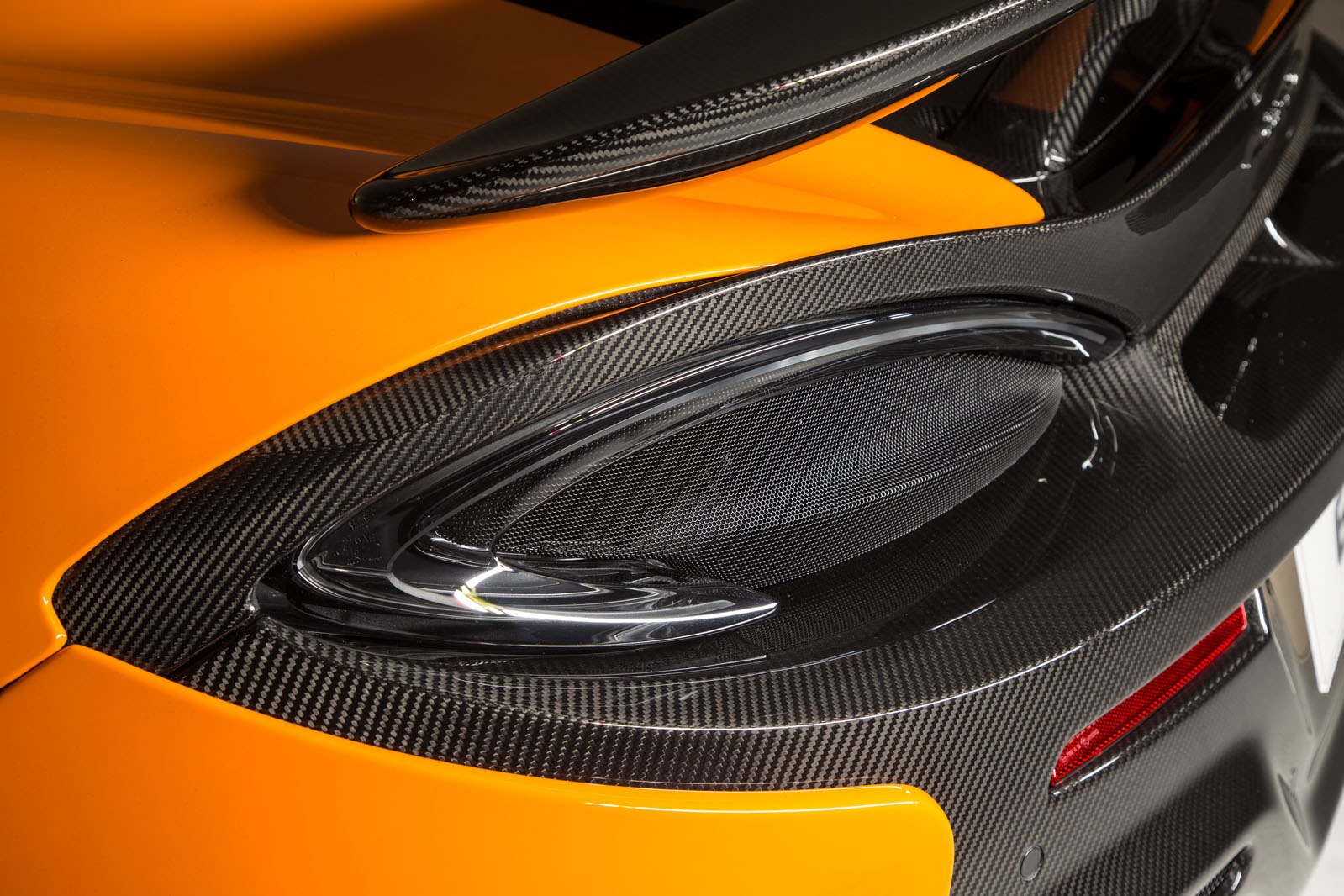 Nearly a quarter of the parts (23%) are changed from the 570S. At its lightest dry weight, the power-to-weight ratio is 481ps/tonne.

Aerodynamics are aided by a new front splitter and side splitter, extended rear diffuser, fixed rear wing, plus a carbonfibre floor with integrated brake ducts.

The suspension is lowered by 8mm and there is a widened track. 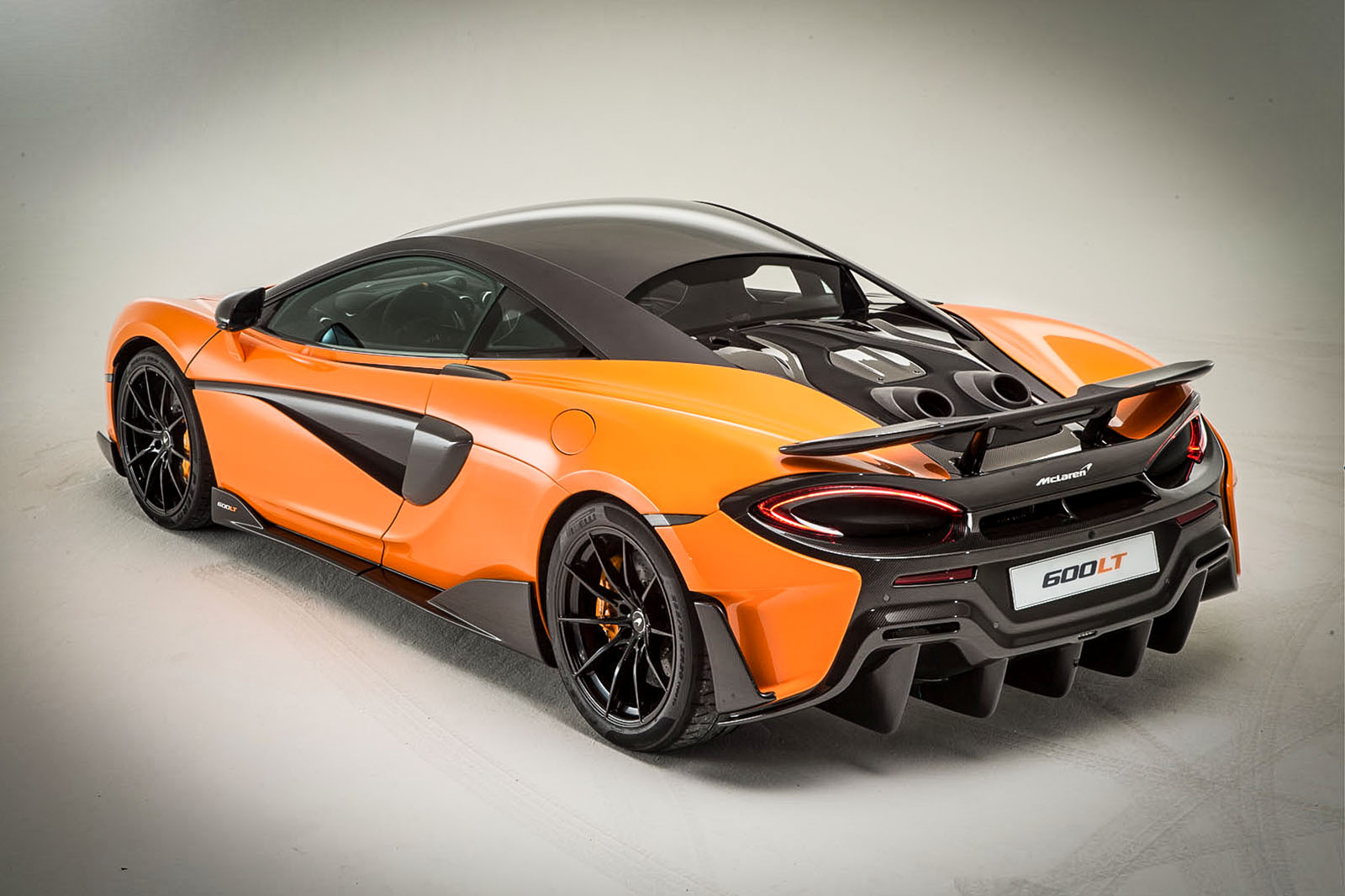 The result is increased downforce, with the 600LT producing 100kg of downforce at 155mph with a 40/60 front/rear split.

The other major aesthetic and engineering difference is top-exit exhausts, which deliver “substantial” weight saving while creating a more raucous sound.

McLaren said that the remit of the 600LT is “to engage and excite drivers to the highest levels imaginable”.

To get the most out of the 600LT on track, McLaren has made some adjustments to the standard Sports Series models’ suspension. The 600LT uses forged aluminium double wishbones, stiffer hollow anti-roll bars and recalibrated dual-valve dampers. Goddard said the focus was “on low speed agility and high-speed stability”. 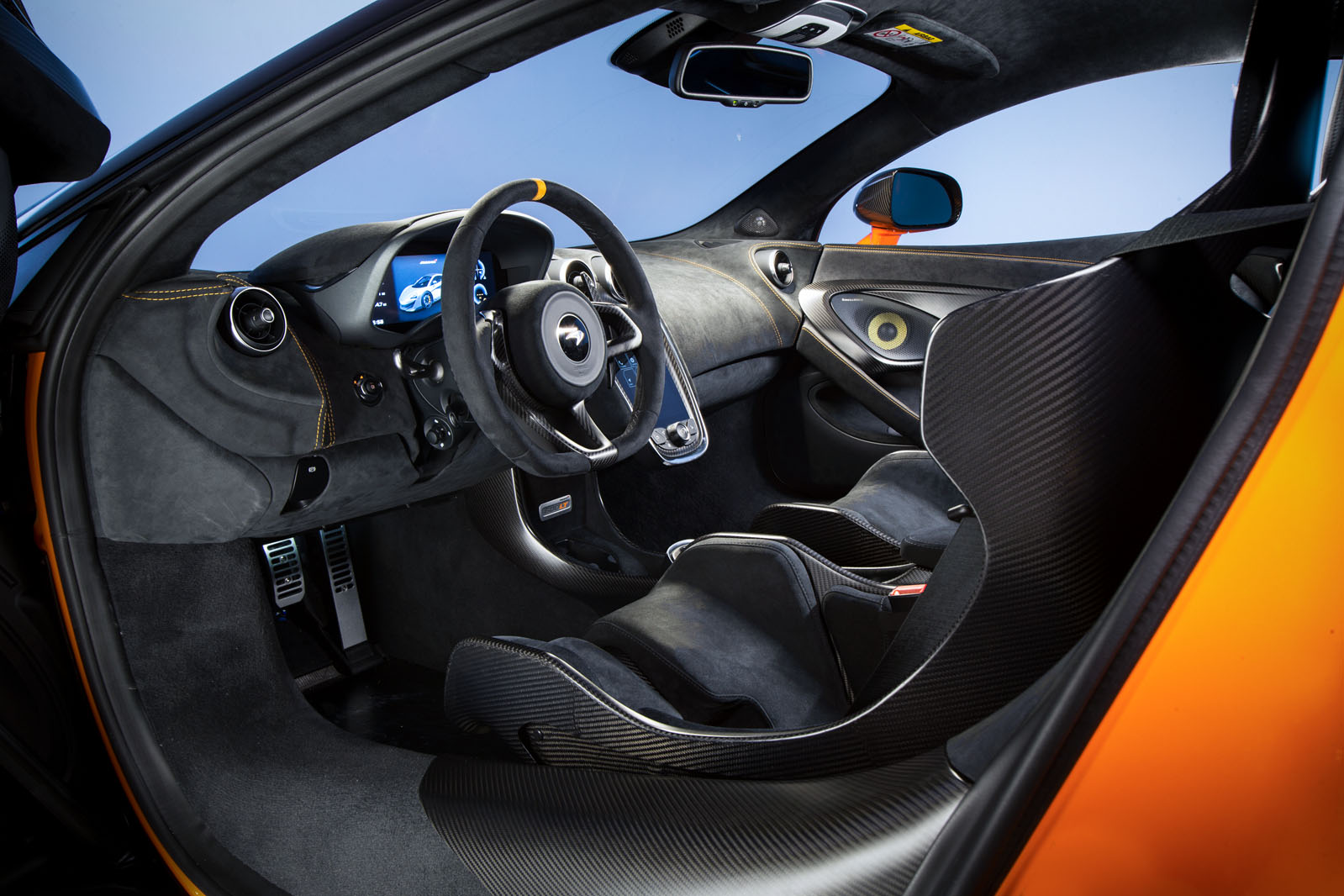 McLaren also claims “phenomenal stopping power and precise pedal feel” from the 600LT. It uses lightweight calipers and carbonfibre brake discs from the 720S, along with a Senna-inspired brake booster.

The bespoke Pirelli P-Zero Trofeo R tyres play a role, helping to achieve "cornering speeds exceeding those of the 675LT".

Goddard commented: “So we could have high agility and increase the steering ratio, the rear end is very strong. The tyres are important, too. 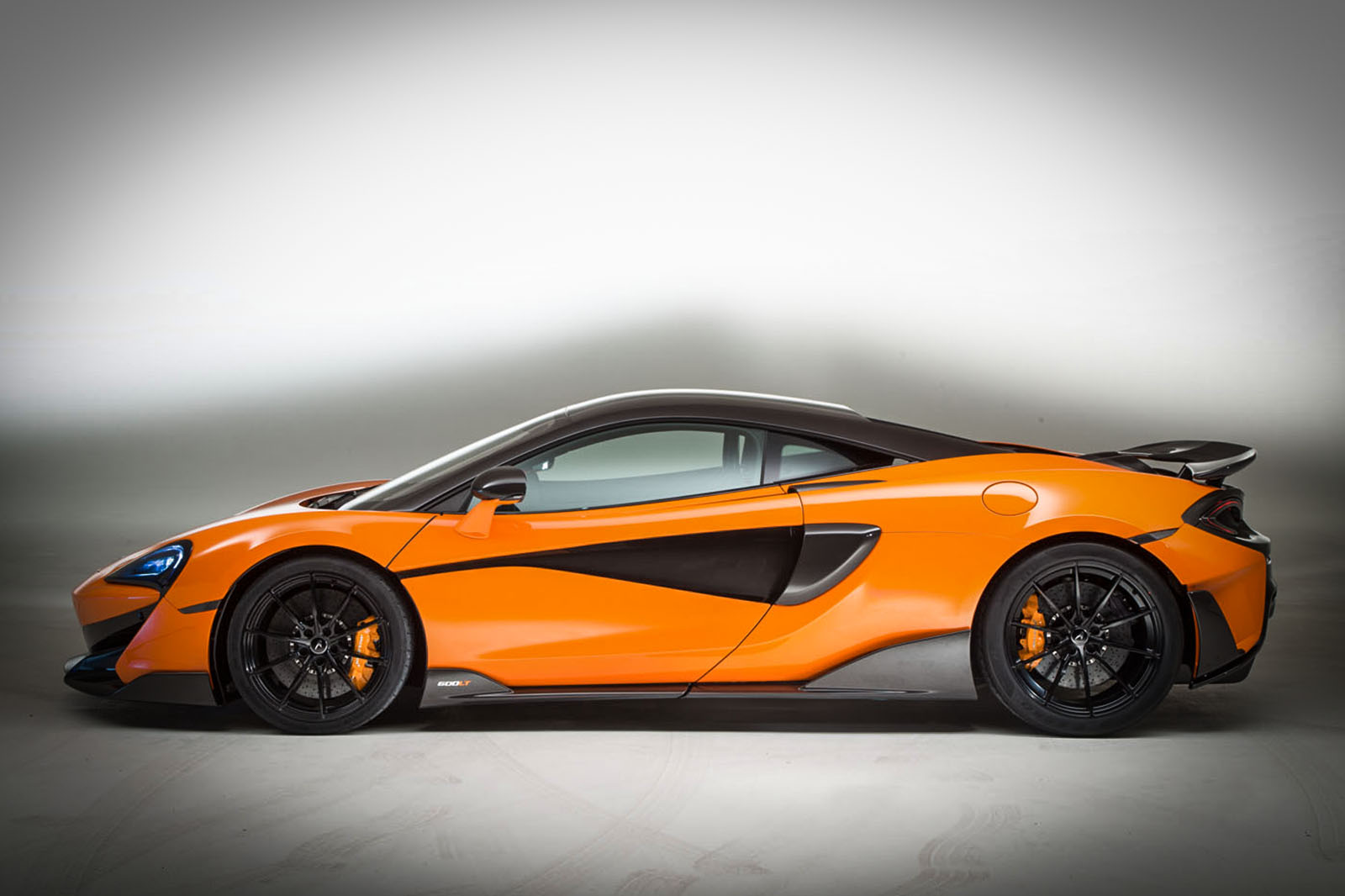 “The 600LT has the same effect — and more — as the 675LT on track. You come out of the first corner smiling. But in normal mode, you can comfortably drive on UK roads. It feels like something special.”

McLaren has not yet confirmed production numbers, stating only that it will be “strictly limited” and that the specialist carbonfibre body panels will “ensure it is significantly rarer than its Sports Series brethren”. It is expected to be similar to the 675LT coupé, of which only 500 were built.

Built at McLaren’s facility in Woking, production will begin in October and last no more than 12 months. 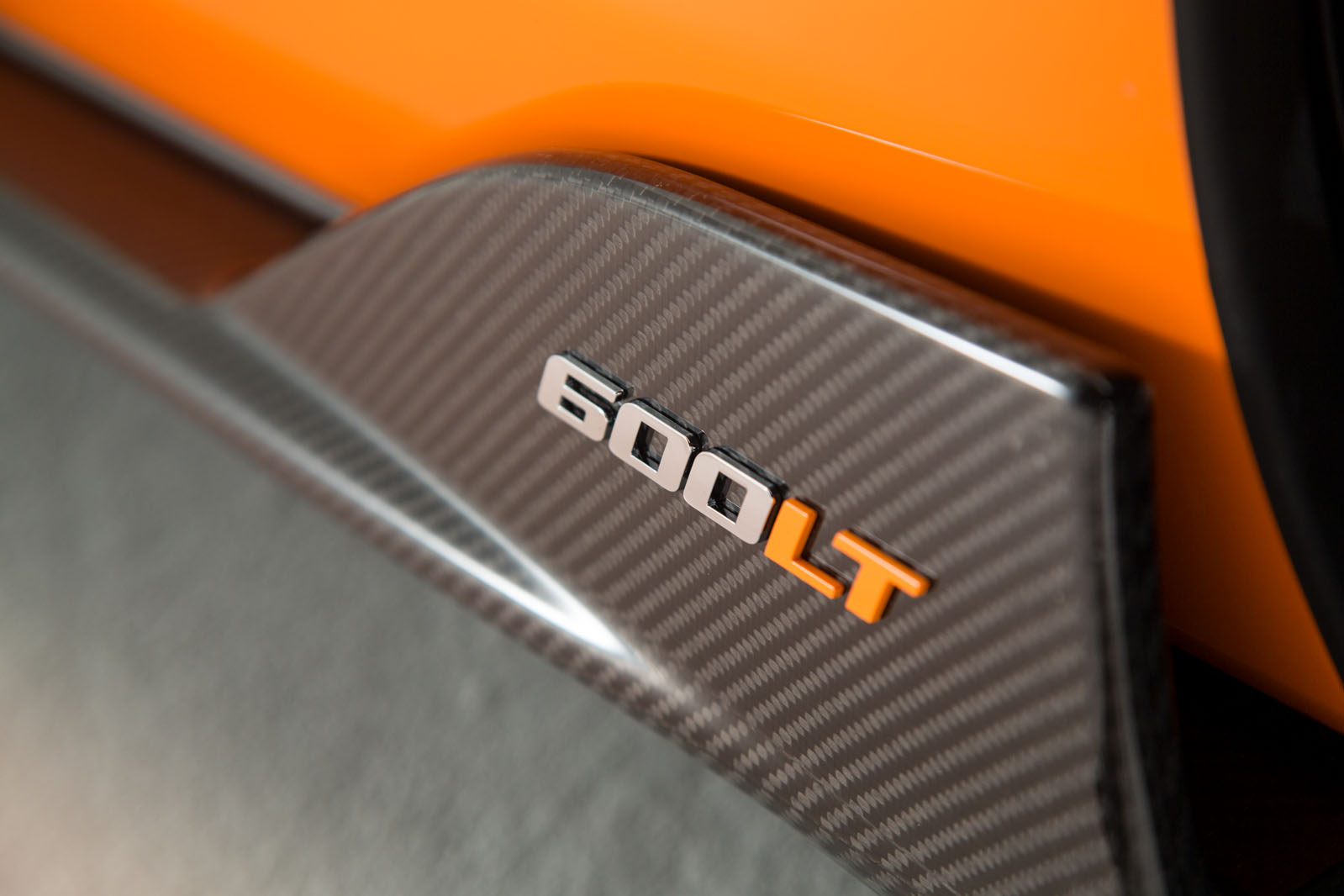 Pricing is from £185,500, which includes a track day experience with driver training.

Typical buyers of the 600LT, said Goddard, are people who “want one of every McLaren ever built”.

He explained: “There are existing customers that have a Super Series and a Sports Series already and now want one of these. And, of course, conquest customers. It’s region-specific, though. In the Middle East, buyers would probably deem the 600LT to be too cheap.”

The model can also be fitted with optional Clubsport and Clubsport Pro Packs, available from McLaren Special Operations (MSO) for even lighter weight and more track-focused features.

The £28,480 MSO Clubsport Pro Pack adds an MSO harness bar and six-point harness for track use in black, blue, red or orange.

The three long tails that came before it

F1 GTR LONGTAIL: The Longtail variant of the F1 GTR made its debut in 1997 and finished first and second in the GT1 class at the Le Mans 24 Hours that same year.

675LT COUPE: Following the 675LT Coupé’s launch at the 2015 Geneva motor show, McLaren’s most involving series-production model to date quickly sold out, which led to...

675LT SPIDER: ...McLaren introducing a Spider version. The open-top model proved even more in demand, with all 500 examples sold within two weeks of launch.

What will the McLaren 600LT be like to drive?

What sort of knob says this

What sort of knob says this car 'is probably too cheap for middle eastern buyers'? So that's why they don't sell so well in Syria, is it?
eseaton 12 July 2018

Ok Rachel. A couple of

Ok Rachel. A couple of questions.

Firstly, who says this is faster than a 488?

Secondly, are you saying that being 0.2 seconds faster to 124mph is something that you personally could feel? Or if not feel, benefit from? Because if you can't, and I'm very sure I couldn't, do you not see how utterly ludicrous the whole basis of your article becomes? How can you care about something that makes no difference?

Autocar used to insert numbers into their words and opinions.

Now it's all about hanging a few quotes onto unverified numbers.

That is not journalism.

So we’re taking a few tenths here a few tenths there, and the McLaren is cheaper to,but, what it comes down to is your preference what you look for in a Car that excites you, you shouldn’t buy a Car to please others to be one of the Heard.