The McLaren 570S Spider is on show at the Goodwood Festival of Speed, marking the folding hard-top, mid-engined supercar's public debut.

The Spider uses an electrically operated, two-part folding roof mechanism that’s similar to the one fitted to the 650S and 675LT Spiders. The lid takes 15sec to open or close and can be operated when the car is moving at up to 25mph.

Read our review of the McLaren 570S here

The roof folds beneath a tonneau cover, which features the car’s most significant design change compared with the coupé version: a pair of buttresses that also support a retractable wind deflector.

The car also has a rear spoiler that sits 12mm higher than the coupé’s to counter the lift generated by the Spider’s different roof design. As such, McLaren claims the Spider has identical aerodynamic performance to the coupé. The rest of the 570S Spider’s design is identical to the coupé, including the dihedral doors. Using the same M838TE 3.8-litre twin-turbocharged V8 and seven-speed transmission as the coupé, the 570S Spider produces 562bhp at 7400rpm and 443lb ft between 5000rpm and 6500rpm. The car has a power-to-weight ratio of 375bhp per tonne. This falls short of the coupé by 12bhp per tonne but eclipses rivals such as the Porsche 911 Turbo S Cabriolet, which produces 328bhp per tonne. 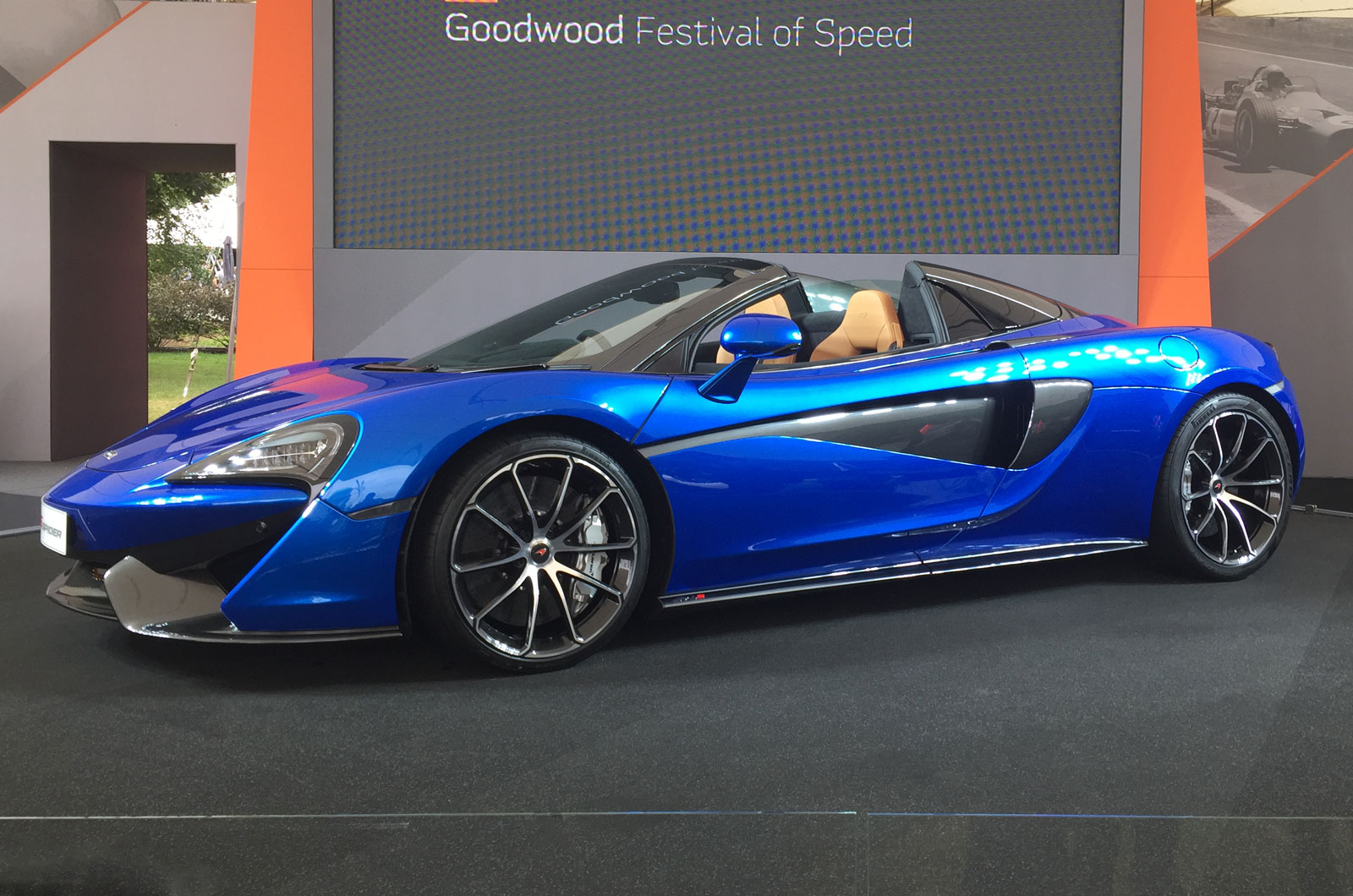 The 570S Spider uses McLaren’s brake steer technology, which can reduce understeer by braking the inside rear wheel, helping to tighten the car’s trajectory.

It also has configurable electronic chassis and drivetrain control systems, including the Active Dynamics Panel, which offers three drive modes: Normal, Sport and Track. Drivers can also adjust the level of the car’s stability controls, with a Dynamic mode reducing the amount of intervention. It can also be switched off altogether.

The 570S Spider’s cabin is identical to the coupé’s, so it has McLaren’s centre console-mounted 7.0in touchscreen, which houses the infotainment system and can control features such as cabin climate settings and the audio system. Six-way adjustable sports seats are standard, but eight-way electric seats with a memory function are available as an option. The seats can be upholstered in optional nappa leather or Alcantara. Buyers wanting the lightest specification car can opt for McLaren’s carbonfibreshelled sports seats, which are the same as those fitted to the P1 hypercar.

The 570S Spider sits on all-new 10-spoke forged alloy wheels, 19in at the front and 20in at the rear. They wear Pirelli P Zero Corsa tyres. Braking is via carbon-ceramic discs of 394mm (front) and 380mm (rear) diameter. The car’s steering is electrohydraulically controlled. 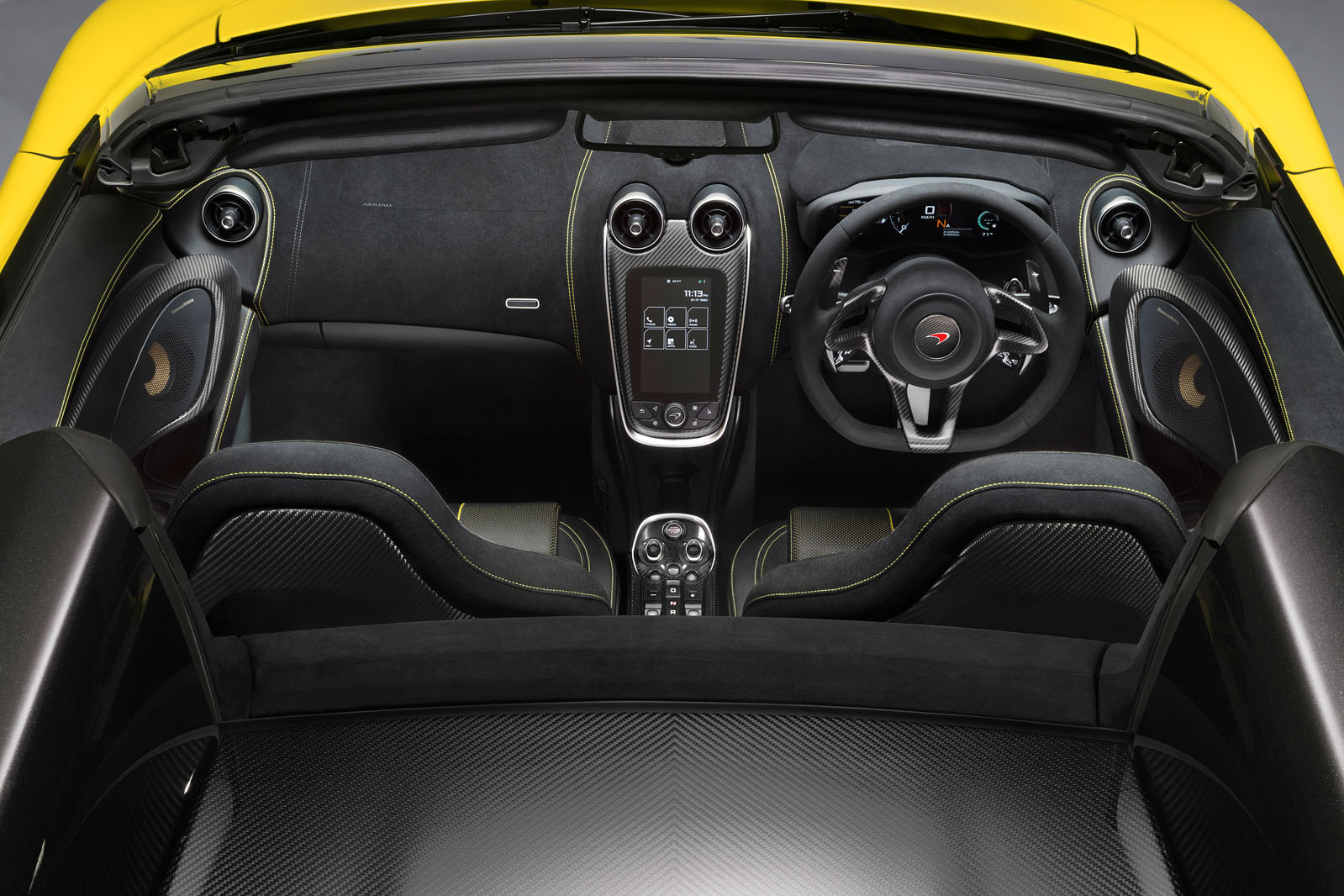 Three new body colours are being added to the list of choices for the Spider, with Curacao Blur, Vega Blue and Sicilian Yellow taking the total colours offered to 20. Cars can be finished with a dark grey contrast finish on the roof, A-pillars and buttresses.

The first 400 cars to be ordered by customers will be produced in a special launch-edition guise.

"This positions the car above

"This positions the car above the 911 Turbo S Cabriolet, which costs £154,614, but undercuts the similarly paced Lamborghini Huracán Spyder, which starts at £198,876." The Huracan might be similarly paced (it's quicker actually, but "similar" can have different meanings if we need a McLaren product to look better) but it's a class above, competing with the 650s and the 488.
mx5xm 14 June 2017

OK, this is a nice looking car that must make the summer just that bit nicer!

Who subs this stuff?

"ts performance is identical to the coupé’s. The Spider can cover 0-124mph in 9.6sec, which is 0.1sec slower than its fixed-head sibling."

Every article is littered with mistakes. It takes two minutes to read through your copy guys, don't be so sloppy.