With 35 years under his belt at Mazda, the brand’s design boss, Ikuo Maeda, has more than earned the title of Design Hero.

It runs in the family: his father, Matasaburo, designed the first-generation Mazda RX-7. Ikuo went on to pen the RX-8 and some of Mazda’s most popular recent concepts, such as the Vision Coupé and RX-Vision, the latter of which is thought to be a precursor to a rotary-engined RX-9.

Maeda cites both these concepts as among his favourites over the years, alongside two production models, the latest Mazda MX-5 and Mazda 3. What about a non-Mazda favourite car design? Instantly, he replies: “The Jaguar E-Type – the proportions, with that beautifully long nose.”

Given his time at the Japanese car maker, Maeda reflects on its design evolution: “There’s been good and bad times but we’ve always been persistent about protecting the beauty of form. Especially in the last decade, we’ve started to implement a particular expression and people have started to recognise Mazda design very clearly.” 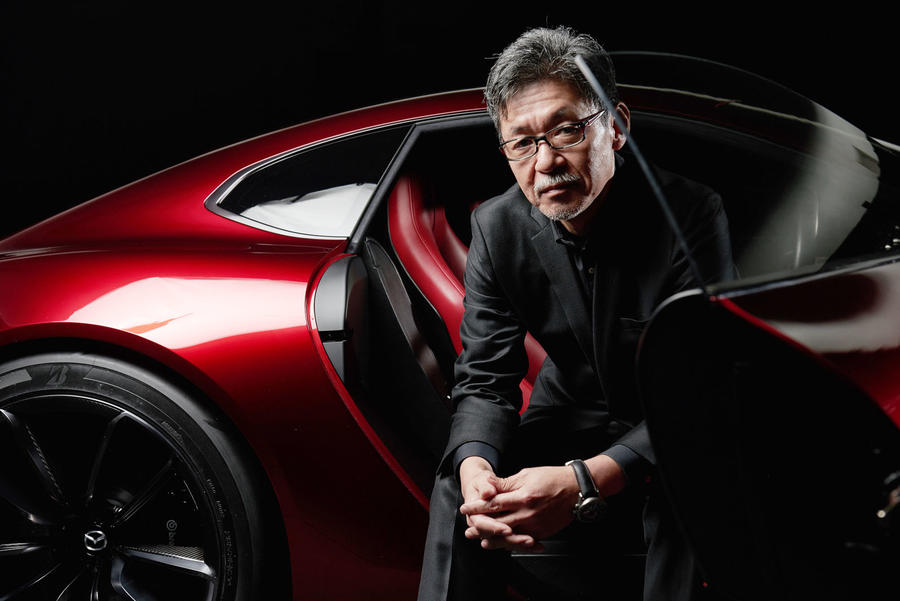 He plans to subtly evolve the look of Mazdas: “There won’t be any drastic change. We will continue to pursue simplicity in our design. Although it’s simple, you’re also trying to convey strength, passion and emotion. That’s the major thing we’re working on.”

Talking about the direction of car design, Maeda says: “I believe car design is at a very major crossroads. Some designs are going in the public transportation direction and some are starting to lose ‘automotiveness’ from their design. We are in a critical phase now. When we design vehicles, we always want our customers to love the design and own those vehicles forever. Given the trend for car sharing – for those people who don’t own cars – it’s difficult to think about them in design because I always want to design cars for car lovers.”

On the topic of enthusiasts, can he confirm the RX-9 will happen? “I have a 1:43 scale model of the RX-Vision sitting on my desk. It is my life’s work to realise this model to a production car.”

He’s thrilled to have won this year’s Design Hero award: “When I look at the list of previous winners, all the people are top-notch car designers and I’m proud to be one of them.”

The Mazda 3 is just a lower rear side window line away from family hatch perfection.

But its the exquisite Mazda Vision Coupe concept from 2018 that is quite possibly the best designed saloon car i have ever seen, show car or not. Oh, i just love it ...

Mazda 3, just not a practical family car so doesn't fulfill the design brief.

Mazda 3, just not a practical family car so doesn't fulfill the design brief.

His styling is terrible!

Here in Australia the the Mazda 3 fought it out for top selling car. Then the current model was released. The car journos gave it car of the year awards, and said it was the best in its class, while they excused its terrible styling, its tiny boot, its poor rear vision and its higher price. And its sales plunged to barely above half the previous model even before Covid-19. There is obviously something seriously wrong with motoring journos assessment of how a car is styled and whether iits worth its price when it so badly misses what the buying public thinks. They really need to rethink what and who they are givinhg awards to.