BACK TO ALL NEWS
Currently reading: Mazda RX-7 revisited - driving the rotary-engined king of spin
UP NEXT
How Max Chilton and the McMurtry Speirling conquered Goodwood

As Mazda plots the revival of its legendary rotary wankel motor, we try out one it made earlier
Open gallery
Close

If we had a pound for every time we had cause to write that Mazda was going to bring a new, rotary-engined sports car into production, we’d have, well, about six or seven quid.

We could have borrowed a recent car, perhaps an RX-8, but I like the purity of an earlier rotary. So we’ve opted to try the first of the RX-7s – or near to it. This is a late first-generation car, so post mid-life upgrades, but an original RX-7 in the scheme of things. 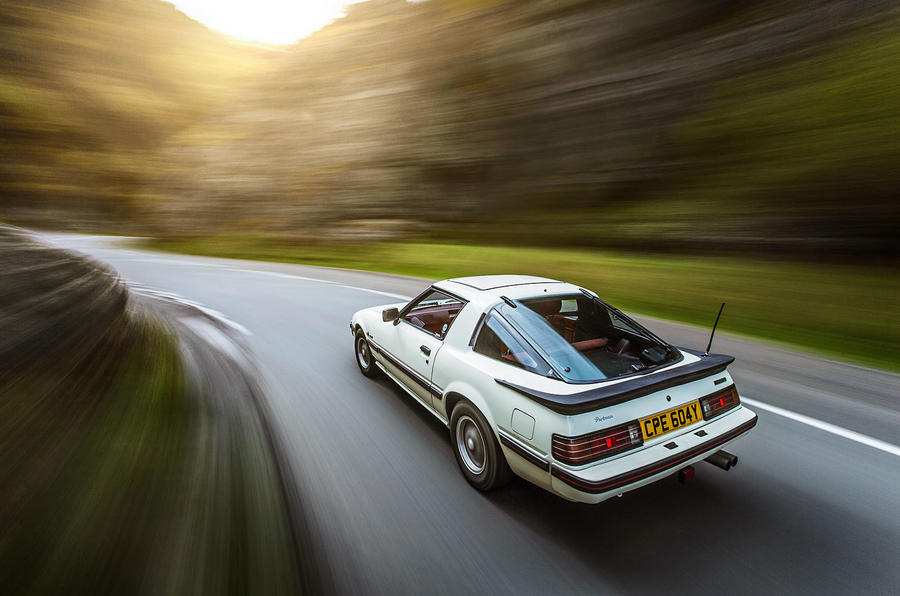 Mechanically, it’s sound and, er, it’s ‘honest’ of body – brushed touch-ups here and there, but straight and solid. And cute. It’s not as dinky as you’d think for a car from 1983. It sold well in the US and they don’t do tiny cars, so at nearly 4.3 metres long it’s a touch longer even than today’s Toyota GT86. Like the Toyota, it’s a 2+2 (although American cars were two-seaters, hence the rear chairs are pretty hopeless), but the Mazda is much narrower than a car of today, at only 1675mm wide.

That much is obvious when you slip inside the carpeted, veloured interior, whose colour and finish tell you quite a lot about when this car was built. Driver and passenger are seated fairly close, but it’s the proximity of the exterior and the glass area that show the car’s age – that make you think you probably don’t want to have an accident in it.

The A-pillars are tiny, so visibility forwards is exceptional, as it is to the rear. The big glass rear hatch means that the entire rear-view mirror, bar a tiny amount of head-restraint intrusion at each corner, is given over to the view behind. No modern car gives you such a good outlook.

There’s not much wrong with the driving position, either. The seat is a little higher than in today’s coupés and the steering column is not adjustable, but the pedals are well spaced and the steering wheel is a pleasing size. The whole thing, though, is starting to feel like a ‘classic’. At least, most of it is. But how about that engine?

Throw open the bonnet and you get a good view of it. Mazda set it back behind the front axle, to give nigh on a 50/50 weight distribution, and it’s a two-rotor unit that runs on a carburettor rather than being fuel injected. Each chamber is diddy, at 573cc. That technically gives a capacity of 1146cc, but because a rotary completes an entire combustion cycle per revolution – whereas a reciprocating engine wants two revs per cycle – it has the equivalent of 2292cc.

Back in the day, that was good for 105bhp and 105lb ft – not a huge amount, even though the kerb weight is 1024kg. But still, sprightly enough; Autocar tested the RX-7 at 120mph flat out and completed 0-60mph in 8.9sec when it was new, figures that each new generation made quicker as the power output grew. 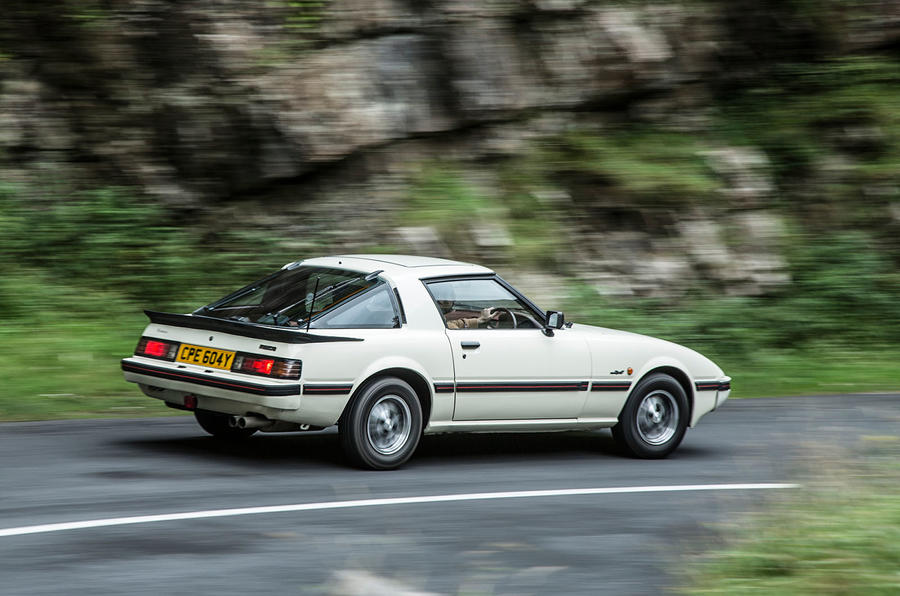 Today, though, it’s not the performance that’s startling but the engine’s smoothness – and the slickness of the gearshift. Quite often, today, low-powered manual cars have the sweetest gearshifts because the ’box doesn’t have to be so beefy to cope with the modest torque output. I don’t know if that’s what’s behind the RX-7’s shift, but it’s as good as anything currently on sale.

It needs to be, too, because you’ll want to use it to exploit the engine to its fullest. It’s tractable enough at low revs, but this is a unit that likes to spin. Throttle response is crisp and it has a lovely, sonorous sound that is impossibly smooth. There’s no increase in harshness as revs rise and it gets no angrier and no more vibratey. It just hums, wasp-like, with a delicate, hollow rasp to the exhaust.

While much of the RX-7 feels like a classic experience, the engine doesn’t. It’s no wonder there’s an audible warning from around 6000rpm that the 7000rpm redline is approaching. Keep the throttle pinned and the engine sails up to and indeed (because it has a carburettor, not electronic injection) beyond it if you don’t change up again. 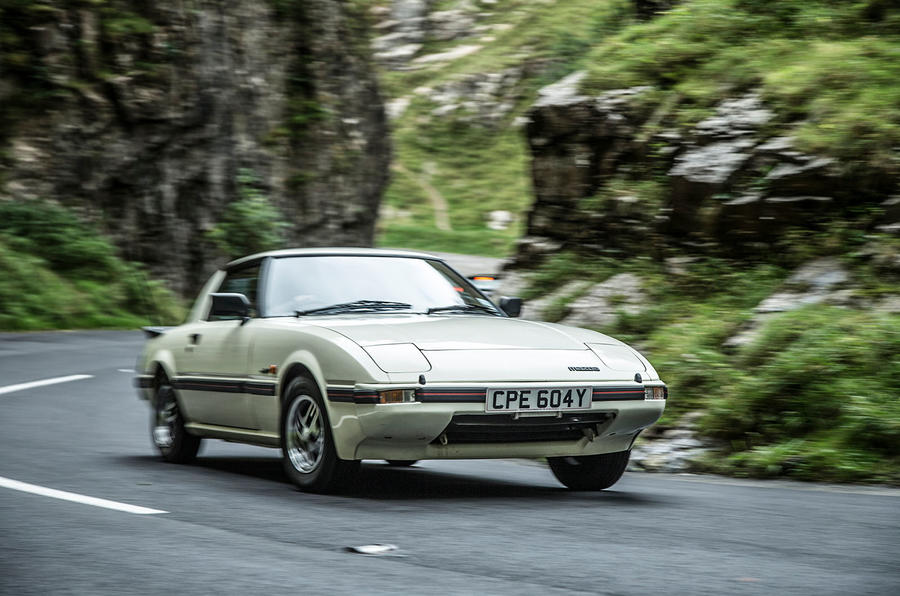 The rest of the RX-7 experience is more of its time. The steering is unassisted, so anything between 3.5 and four turns lock to lock, depending on how heftily you’re prepared to challenge its soft limits. And although, later in life, the RX-7 was – still is – popular with drifters, given the number of turns between locks, that’s something I’m disinclined to try with this one.

Instead, the RX is best enjoyed in the classic coupé style. It rides on 185/70 R13 tyres and has a loping, docile ride quality that makes it an easy companion, and it steers naturally and rolls up to a modest cornering limit. It’ll hold a motorway cruise with ease and, as classics go, it’s remarkably usable and, from less than £5000, not expensive – if you can find one.

Do so and you’ll have a car that feels at home enough in modern traffic conditions and has bags of mid-to-late 20th century character, but with an engine that feels every inch at home in the second decade of the 21st century. Now we’ve just got to hope that Mazda will assemble a car whose entirety is fit for today, and tomorrow. Start putting the pounds to one side. You never know when they might finally push the button.

This article was first published on 27 October 2015. We're revisiting some of Autocar's most popular features to provide entertaining content during these difficult times.​

Why a buzzer in the Mazda RX-7 meant imminent doom​

The glorious history of rotary-engined Mazdas​

The car pictured above is almost exactly like my first RX7 right down to the red pinstripe on the bumper; that was 1984. This car started my passion for the RX7. This model was the last of the series before they changed the shape and went to the FC.I had the opportunity to start a business in the USA in 88 and had to sell my 7.I paid 24,500 aud new in late 1984 and got back 24,500 aud in 1988.I swore I would replace it once in the USA. The business took every cent we had and the first opportunity for me to get another was in 1996 and I bought an FD3..........OMG, I loved this twin turbo even more than the first.9/11 occurs and the world (especially the USA) changed: Corona Virus is the closest thing anyone will get to see how badly affected the USA was by 9/11.............we returned to Australia.I had to sell my FD before leaving Philadelphia but made a commitment to myself I would get another. They stopped making them in 2002. Finally, in 2015 I watched the auctions in Tokyo.I imported a secondhand 1994.If you can get your hands on one? Buy it! Don't listen to people talking about wear and tear; if you like it buy it.It is like any V8, treat it well and maintain it and the twin-turbo rotary will treat you well and you will see why so many of us feel driving this vehicle is not driving but an exercise in pure passion. Hopefully, my photo of REXY will attach.

The RX-7 was delightful car

The RX-7 was delightful car to drive, the petite styling an object lesson in minimalism, compared to most of today's clunkers.

But should Maxda pursue the rotary? I reckon the answer is only if they have cured previous issues like poor fuel consumption and rotor wear. Even then, a new-generation rotary needs to be cleaner and far more economical than any other ICE engine, preferably competing with EVs.

They need to forget this and the SKY inactive engine follies and start produce a range of smaller turbo charged OR plug-in engines NOW or get left behind.
ou701 23 March 2020

Can we not enjoy a few minutes peace reading about how good the Mazda rotary engine was without another 'the world must do as I command' NOW lecture?'

Can we not enjoy a few minutes peace reading about how good the Mazda rotary engine was without another 'the world must do as I command' NOW lecture?'