BACK TO ALL NEWS
Currently reading: From Luton to Hethel in the 180mph Lotus Carlton
UP NEXT
Agents of change: how car buying is changing

From Luton to Hethel in the 180mph Lotus Carlton

The Lotus Carlton once had a bad boy image, but 30 years on there's a lot of love for it. We drive one from Vauxhall’s long-time HQ to Lotus’s
Open gallery
Close
Share story

Griffin House is silent. The reception area here, in what was Vauxhall’s UK headquarters from 1964 until last year, used to feature two booming cascading waterfalls, one each side of the front desk. I’m amazed security guards didn’t sue for hearing loss or tinnitus.

Today, Vauxhall has moved out, the site is set for redevelopment into housing and the occasional van mooching to a security office around the side of the main building is the only notable activity. That and a dark-green Vauxhall Lotus Carlton sitting out the front.

Opinion: The hottest Vauxhall hatches are often the maddest

They were all dark green, Lotus Carltons. “There were no options. Take it or leave it: that’s the car,” recalls Malcolm Tearle, who at the time was Vauxhall’s youthful manager of special projects. His career went on to include the likes of the Monaro, VXR8 and VX220.

The Lotus Carlton turned 30 this year. That would be as good a reason as any to revisit it were it not also for the fact that Vauxhall, now under PSA ownership, and Lotus, under Geely, are both in the midst of a resurgence. 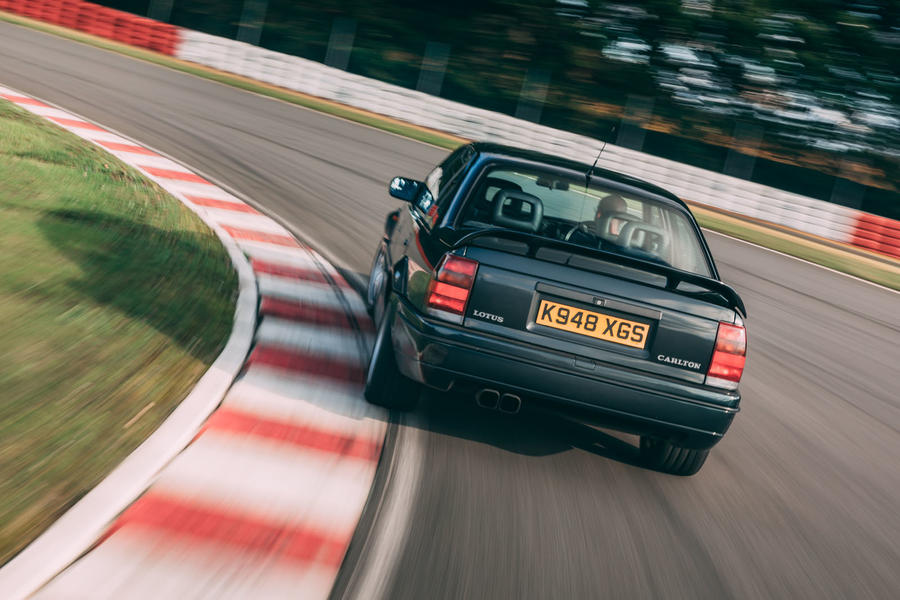 In 1990, both companies were part of General Motors. Vauxhall (and to a lesser extent Opel, its mainland-Europe stablemate) had a dowdy image it wanted to shift and Lotus always needed extra work.

The £48,000 Lotus Carlton, a high-performance version of Vauxhall’s big executive saloon, was conceived as a car that could accomplish both. It did, and then a bit more. “The top speed was 176mph, and I think the press were all ‘this isn’t socially responsible’,” says Tearle.

This is true. Even the then editor of Autocar, Bob Murray, wrote that “nobody buying this car could possibly argue he either needs or will be able to use a top whack which is claimed to be around 180mph”, before advocating that Vauxhall should have limited the car to 155mph – something Opel management had proposed.

But Vauxhall wanted to let the car do what it could do. “I did a thing with [then land speed record holder] Richard Noble at Elvington airfield,” Tearle says, “setting top speeds in this and a Monaro. I remember hitting the brake board in the Carlton with the speedo pointing to six o’clock, which we worked out to be 186mph.” 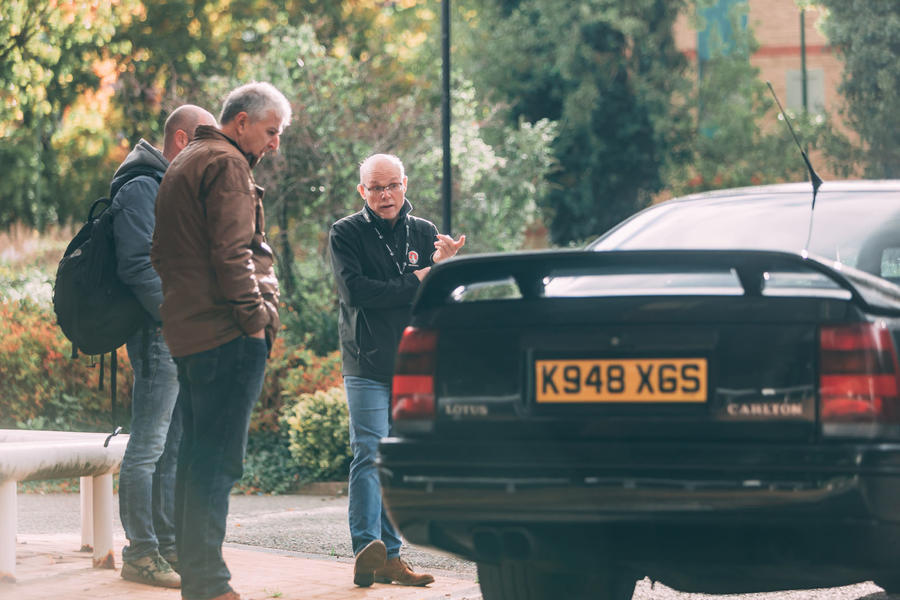 There were similarly fast cars at the time: Lamborghinis and Ferraris and other exotics, but none had the audacity to wear a Vauxhall badge on their nose, an apparent problem even though that was entirely the point of the exercise.

Besides: 155, 176, what difference would it have made? Russell Bulgin, writing for Car magazine and later an Autocar contributor, took a Carlton to Germany to annoy “those po-faced word-sharks who berate Vauxhall for producing a 176mph saloon car and then stand first in line for a road test where they will, natch, be taking performance figures”.

Fair dos. We did. The Carlton did 0-60mph in 5.1sec, 0-100mph in 11.1sec and 30-70mph in 3.8sec. The base Carlton was built by Opel in Rüsselsheim, Germany, then came to Lotus for the modifications that made such outrageous performance possible.

“Cars would arrive on a transporter as a 3.0 GSi,” says Tearle. “They’d take it to the workshop, put it on a ramp, drop out the suspension, engine, transmission, take all the glass out, all the interior trim out. “It was a very costly and time-consuming process, because they then cut the wheel arches, cut a new place for the gearlever, had to do all the bodywork – bumpers, spoilers, rocker panels. The interior trim was totally re-covered. There was a different rear axle, ZF gearbox (most GSis were automatics), while the engines were totally stripped and went for a rebuild.” 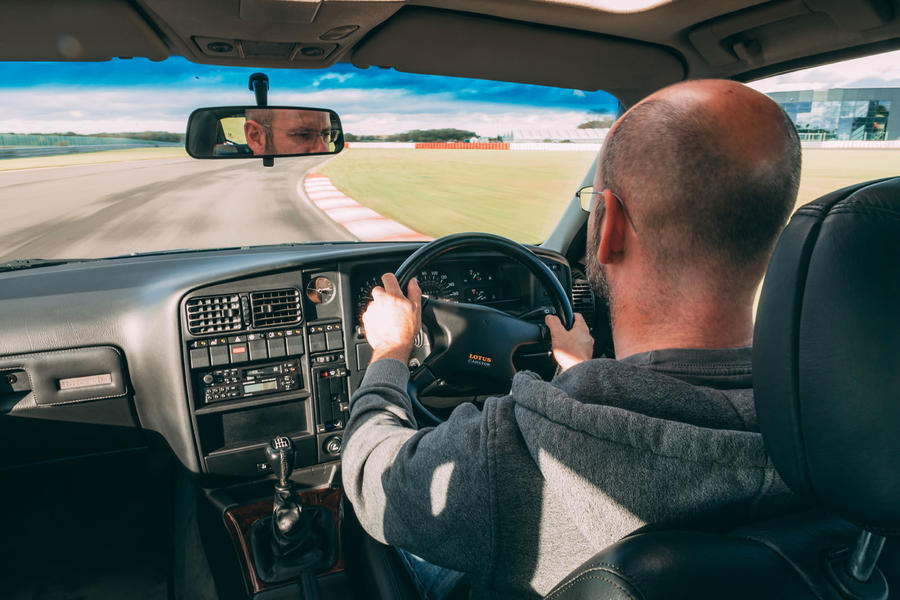 After some porting, the addition of two Garrett turbos and the straight-six engine’s capacity had been increased to 3.6 litres, the Lotus-tuned and hand-assembled unit made 377bhp.

Later still, Autocar also took one to Germany to try to reach its top speed. Then, as now, derestricted autobahns were where cars like this, which add speed quickly even when deep into three figures, make most sense. I recently hit 180mph on an autobahn in a Mercedes-AMG E63 with no drama, no fuss – and no questions-in-the-house controversy.

Today, though, the Carlton will be going from Luton to Hethel, Lotus’s home – a journey Tearle made a couple of times a week when the 949 Lotus Carltons were in production. (Tearle says the 950th and last was damaged on the production line at Rüsselsheim and never built.)

At the time, the Carlton was a big saloon but, inevitably, given its thin roof pillars and that it’s only around 1.8m wide across the body, it doesn’t feel it today. The steering is heavy and slow and so is the clutch, while the driving position, owing to a rake-only adjustable steering wheel, is long-armed. But you can feel it’s a car built for long journeys at big speeds. The gearbox is long and slow (this six-speed manual, used first in the Corvette but also in Aston Martins and other low-volume cars, always was) and geared for the heavens. Top speed arrived in fifth gear, and in sixth, at 1000rpm, I’m doing 46mph.

Some of this car feels old. There’s a little driveline shunt (it’ll probably want a new differential at some point) and, as cars get older and spot welds creak, classic cars do risk feeling similar: as you steer, you take up the slack in the body and in bushes and joints before you get much response. Like watching an ageing sportsperson, you can see the gifts are still there but everything is a little dulled and slowed. But the engine is still magic. 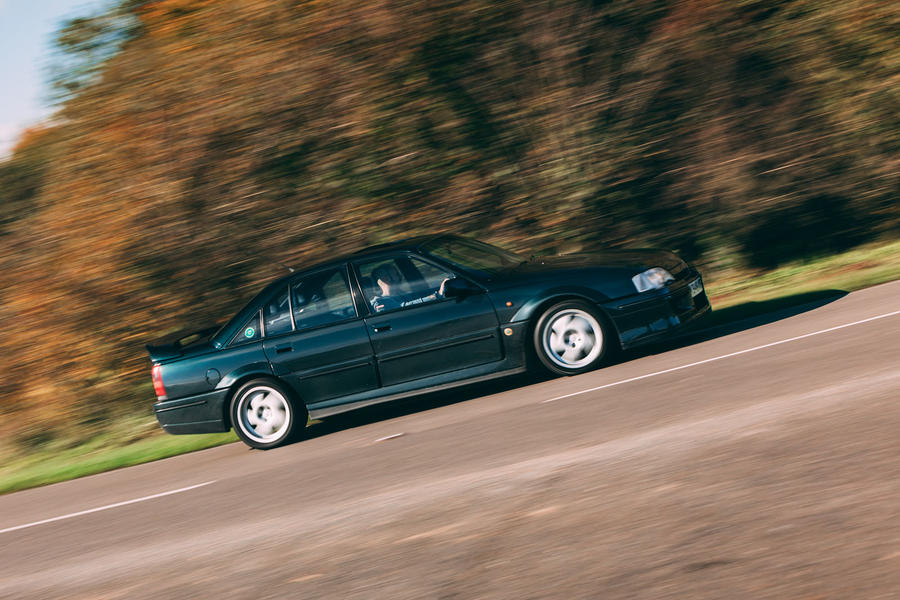 There’s barely any turbo lag as it gets going early and keeps pulling with the kind of smoothness that only multiples of straight six offer. It still feels fast today and, even though it was outrageously so 30 years ago, sometimes that wasn’t enough.

“A lot of people did modify them,” Tearle says, “pushing the performance from 377bhp to 500bhp, 600bhp. When we had cars back [for service or warranty work], we’d get the dealers to remove the glovebox. There was a Lotus sticker over the ECU which would burn ‘void’ into it if removed. A lot of cars were modified but you could always tell: they were very tired and the engines were noisy. When you drove a car that had been [left] standard, you knew without looking at anything else because it just felt right.”

The engine in this car still does. If you were to restomod a Carlton, you’d stiffen the shell, quicken the steering and maybe mount the driving seat lower, but you could leave the engine well alone. 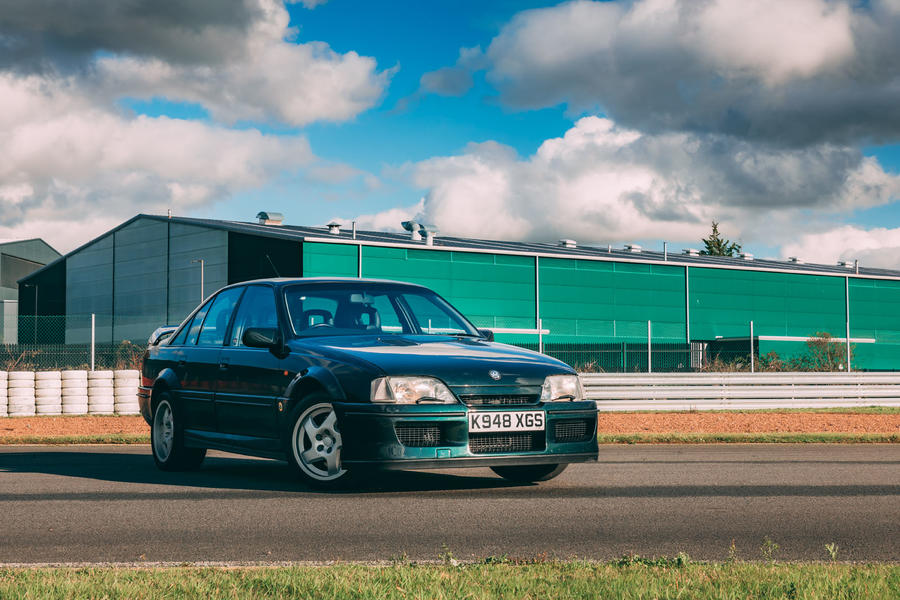 In contrast to Luton, Lotus’s HQ is anything but silent. The company is recruiting heavily for both Hethel and at new engineering outposts in the Midlands, and new car development continues apace. In the very building that Lotus assembled the Carlton (the green one behind the car in the picture opposite), it will also build the Evija, its all-electric four-wheel-drive supercar.

That’ll be hand finished, limited in numbers and, at 1680kg, a similar weight to the 1655kg Carlton. It’ll have 1972bhp and a top speed of 200mph and cost £2 million. Those are absurd numbers, it’s even harder and less acceptable today to use a car’s performance and yet where’s the controversy now?

Maybe the world’s not becoming as intolerant to fast cars as we thought. Or maybe we should imagine it with a couple of extra seats and a Vauxhall badge on the front.

Don't read this! Just another journo on the glorious Vauxhall Lotus Carlton

The logic of the German "restrict the top speed to 155mph" always baffled me, as 155 is crazy speed for road use anyway. Logically you either have no restriction OR you do what Volvo have done and have a restriction at a still fast but more realistic speed like 112

I always assumed the 155mph was connected to what was certified a safe running speed for the standard tyres, attempting to run for a period faster had a high risk of a overheating tyre and a blowout, at 180 taking out probably many others.

A few members of the plod have got themselves in hot water in these, thinking they were the only ones who could get away with using its capabilities, management didn't agree sometimes.

Fantastic car though, in its day it was the guv'nor