Land Rover has opened UK order books for the Defender Hard Top, the commercial version of the new Defender 4x4.

The Hard Top 90 has a total load capacity of 1355 litres, while the 110 can carry 2059 litres. The load area is separated from the passenger compartment by a full-height partition, with underfloor stowage designed to maximise cargo space. The commercial Defender is also able to tow up to 3500kg, and can be fitted with an optional third central jump seat for greater crew flexibility. Customers are also able to add their own bespoke signage using the blank side panels.

The Defender Hard Top revives the Hard Top name first used by the British brand in 1950 when a removable roof was introduced for the Series 1 Land Rover, and is being developed by Land Rover's Special Vehicle Operations division.

“Land Rover Defenders have always thrived in the harshest environments," SVO boss Michael van der Sande said. "Whether for commercial or recreational use, the Defender Hard Top is a true no-nonsense vehicle that will take whatever is thrown at it, or in it.” 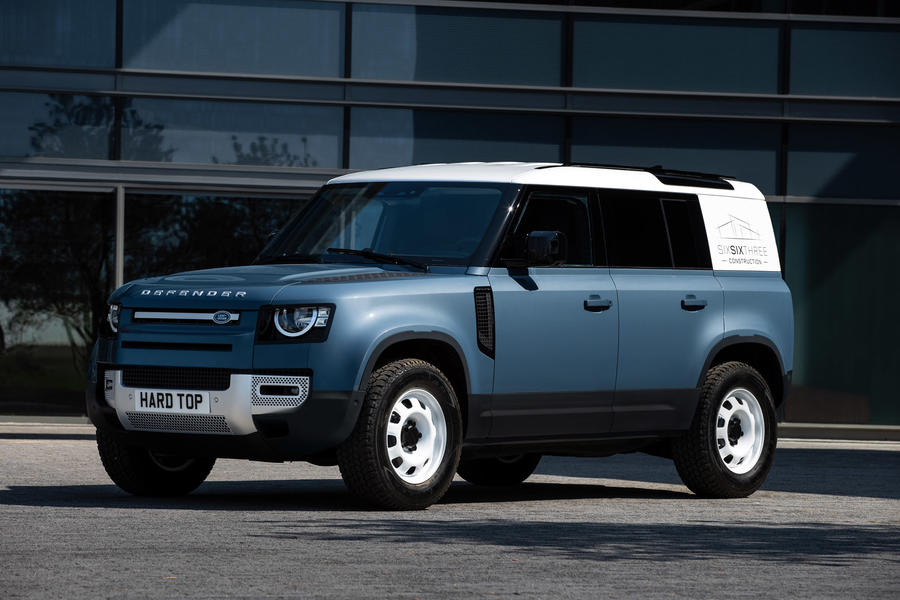 Both 90 and 110 Hard Top models use independent coil-sprung suspension, with electronic air suspension optional on the larger model.

Both have 291mm ground clearance, while the 110 offers maximum approach, breakover and departure angles of 38deg, 28deg and 40deg respectively, along with a 900mm wading depth. The ability to ford deep water is further aided by a special Wade mode as part of the Terrain Response 2 system.

The Hard Tops also have a 3500kg towing capacity, and will feature a range of systems to make towing easier. That included Advanced Tow Assist, which allows drivers to steer trailers using the rotary dial on the centre controle.

Van der Sande said that the interior of the Hard Top was designed to “maximise the functionality and usability” of the cargo area, using “tough materials and clever storage solutions to ensure it surpasses the capability of any previous Defender Hard Top”.

To maximise cargo space, the cabin doesn’t keep the second or third row of seats, but it will offer the option of a ‘jump seat’ that allows three people to sit in the front row. Land Rover's ClearSight rear-view mirror, which can show images from a HD rear camera on the rear-view mirror, will be available to make reversing easier if a full load in the cargo bay is limiting visibility.

As with the standard Defender, the Hard Top features Jaguar Land Rover’s latest infotainment and driver assistance features, including the latest version of the firm's Pivi Pro infotainment system. This will include Apple CarPlay and Android Auto compatability, and the ability to receive wireless software updates.

The system also works with a Land Rover smartphone app, which can be used by businesses to remotely check the location, fuel level and journey history of their vehicles.

The hard top defender didnt have rear doors in either long or short wheel bases, the crew cab/pick up version did, but it also had rear seats.. The comercial Discovery on the other hand did, which once again proves what this really is, its a replacement for the disappointing flop that is the Disco 5 and not a workhorse in the same mould as a proper defender- 90/110.

I keep coming back to these images. This colour, those wheels, the commercial back end... shows off the design nicely and tastefully. Well done LR (though please consider an option of no nappies, replacing them with unobtrusive, blended panels).

The lines and design touches are so much cleaner than the Grenadier just revealed. Looks like there'll be admirers of each.