BACK TO ALL NEWS
Currently reading: Jaguar slashes XF price and revises exterior
UP NEXT
New Ora Funky Cat touches down at £30,495 with 193-mile range

Jaguar has revised its Jaguar XF in a bid to rejuvenate its dwindling saloon sales and stave off highly successful German rivals such as the BMW 5 Series and Audi A6.

The updated XF saloon and XF Sportbrake estate have a subtly tweaked exterior and an all-new interior co-developed with the recently revised F-Pace. They are now also offered with a diesel mild-hybrid powertrain.

The interior, a criticism of the outgoing car, is the most dramatic change. Jaguar interior design chief Alister Whelan said: “We really needed to take the interior to the next level. We deliberately planned the F-Pace and XF together to achieve economies of scale. They share new interiors from the ground up.”

Highlights inside include considerably improved materials (“no scratchy plastics”, said Whelan), such as on the headrests and switchgear on the doors shared with the range-topping Range Rover, as well as the Pivi Pro infotainment system that made its debut in the new Land Rover Defender.

As well as Pivi Pro, the XF and Jaguar F-Pace are the first models to receive a larger, tablet-like 11.4in curved touchscreen, which is said to be significantly more responsive and easier to operate. Other new technology includes over-the-air software updates, cabin air ionisation and wireless phone charging. 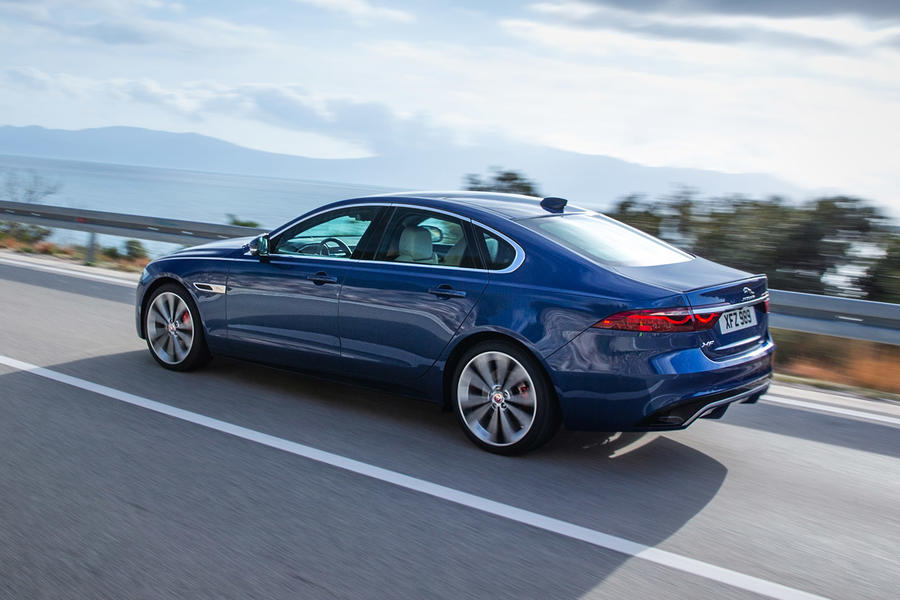 Jaguar has also introduced more fine detailing – a theme set to become more common on Jaguar models – such as cricket-ball stitching on the gearshifter, an embossed Jaguar leaper in headrests and a set of ‘Est. 1935 Jaguar Coventry’ upholstery tags.

The powertrain line-up has been simplified to one diesel unit and two petrol options, each available with an eight-speed automatic only.

The 201bhp 2.0-litre four-cylinder diesel paired with a 48V mild-hybrid system is the most frugal, producing CO2 emissions from 130g/km and fuel economy of up to 57.2mpg in rear-wheel-drive form. All-wheel drive is also available.

Outside, there is a new front bumper, wider front grille with a mesh design inspired by Jaguar’s heritage logos and side wings with the Jaguar leaper, as well as slim LED headlights with optional pixel technology. At the rear, the XF has a wider bumper and darkened tail-light surrounds.

First deliveries begin early next year, with prices starting from £32,585. This significantly undercuts its BMW 5 Series rival (from £38,600) and is a drop from the outgoing XF, which began at £34,995.

The XF range has been streamlined from 64 to 28 derivatives, a move intended to “reduce manufacturing complexity and retain the most popular features”, said Jaguar.

A new buying process, described as a “browse, buy, drive away” approach, will be trialled with the launch of the new XF and “harmonises online and offline pricing so that customers know they will get the equivalent price, however they choose to purchase”, Jaguar said.

The future beyond this revised model and its smaller Jaguar XE sibling, both built at the brand’s Castle Bromwich plant, remains uncertain given the market shift away from saloons. A possible alternative to both is a single, eco-focused compact saloon, offering mild-hybrid and plug-in hybrid powertrains, or a smaller car, about 4.5m long, which was recently hinted at by Jaguar design chief Julian Thomson.

The previous generation XF was a lovely design but this one is awful, it's too plain and I've not idea why anyone would want one over a 5/A6/E.

These represent great value for an executive brand. £32k gets you a high spec Golf which is two sizes smaller. Also like the new large touchscreen in the cabin. Main downside is the lack of a PHEV this would make it a good company lease car especially if under £40k

I've been in the configurator

I've been in the configurator and it's astoundingly good value. I'd now choose this over the Germans any day.