BACK TO ALL NEWS
Currently reading: Interview: the man who makes Porsche's GT-series cars great
UP NEXT
New Volkswagen Golf R 20 Years is most powerful production Golf

I’m sitting in a cafe somewhere on the west coast of Scotland with Andreas Preuninger, the man known as Mr GT3 or, more prosaically, ‘manager – high-performance cars’.

He is trying to recall the age at which he realised he had become obsessed with cars: “I think I was three. No, wait, maybe less.”

But Preuninger’s obsession can be narrowed down further. “I came from a Porsche family and my bedroom walls were covered in pictures of Porsches. Actually, one Porsche: a 1973 Porsche 911 2.7 Carrera RS. White with blue decals. When I was a kid, that was my car,” he says with feeling.

But we can focus event more tightly than that: “My father worked in a business supplying wind tunnel components and Porsche was a client. I went with him on business trip to Weissach when I was 20 years old and that was that. It suddenly became completely clear to me: this was the place I needed to work.”

Until that moment, and despite studying automotive engineering at university, he had no idea what course his life might take.

Not that he exactly walked into a job there: “Back in the mid-1990s, Porsche was not the company it is today. It was more interested in reducing staff numbers than increasing them.” So if he couldn’t work for Porsche, he’d do the next best thing and work for one of its suppliers. For two years, the newly graduated Preuninger worked one step removed from the company of his dreams, making sure a steady stream of CVs found their way to Porsche’s HQ in Stuttgart. “I sent it in 11 or 12 times before finally they gave me a job,” he says. It wasn’t at the company’s Motorsport operations at Weissach. It was on the engineering consultancy side, managing relations with Volkswagen and Audi. But his foot was firmly in the door. He was not about to give up now. 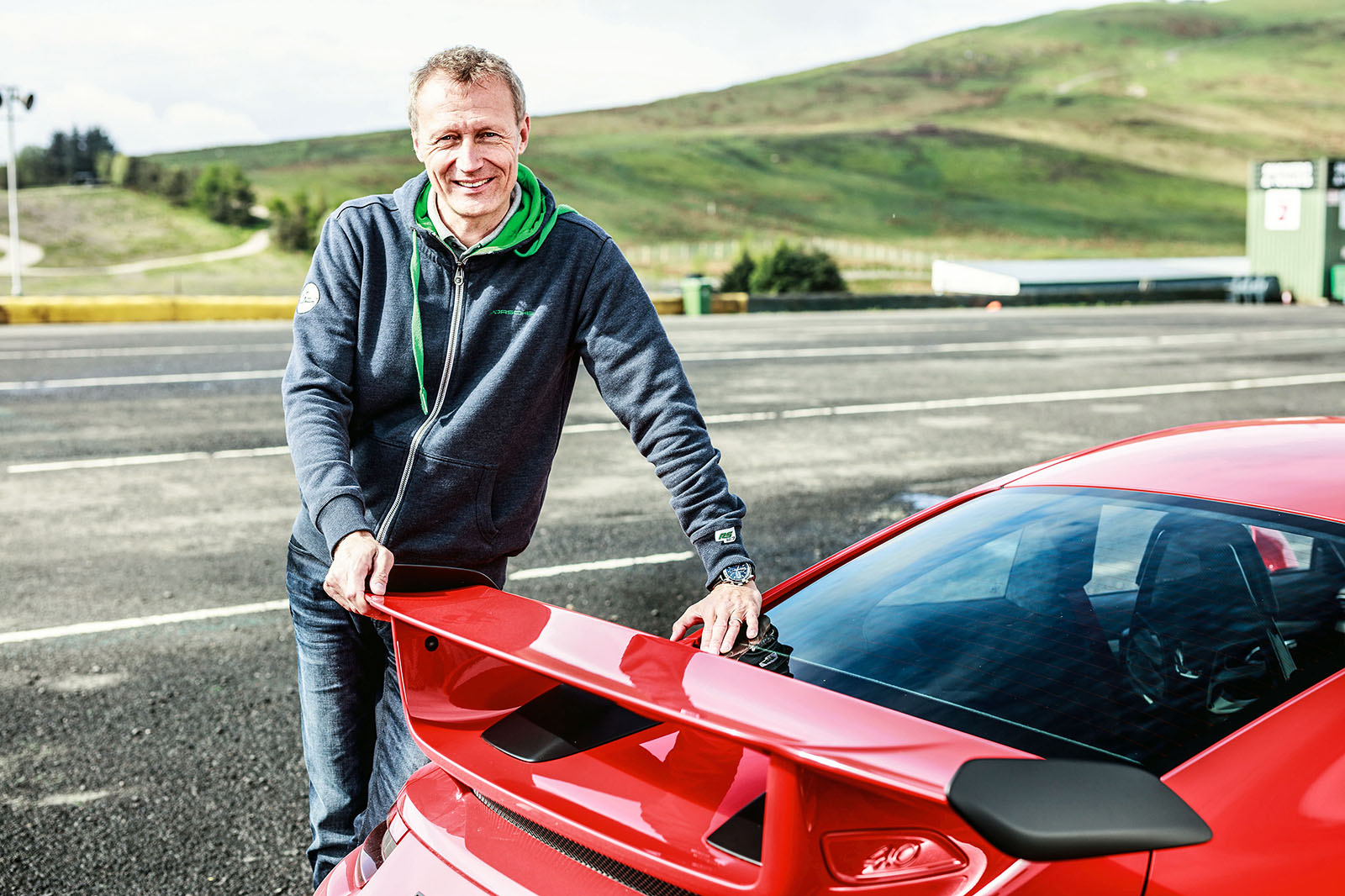 “The Motorsport department was run by Hartmut Kristen at the time, so I kept on ringing him and he kept telling me there was no job. But in the end, we were introduced by a mutual friend at a party, had a few beers and it all kind of worked out from there.”

You can say that again. He arrived in Weissach in 2000, the original 1999 GT3 being the only GT-series car whose development he did not oversee. To say the department has flourished under his influence is putting it mildly. From it being a one-car department when he arrived, he has been responsible for all the GT3 series, the GT3 RSs, the GT2 RS, the 911 R and Cayman GT4. In other words, all of Porsche’s 21st century iconography, save the 918 Spyder. And the cars themselves have evolved beyond recognition relative to the Porsches on which they’re based.

“When I arrived, a GT car might have one hundred components that were not common to a Carrera. Now that number is maybe 1000. To do a new GT car is as big a programme as a new 911 Turbo, maybe even bigger.”

The secret of the success extends far beyond simply creating fast and sexy cars. They have an authenticity others lack. Preuninger will, for instance, only make GT models from cars with existing race programmes. So although his team may be integrally involved in cars like the Boxster Spyder, it is not a GT car. But he acknowledges that he starts with an advantage. “There are some good fast cars made by companies like Audi and BMW but we are lucky. Where they have to start with a car designed to take the kids to school, we start with a car designed as a proper sports car. We have a brilliant platform to begin with and don’t have to trouble ourselves with making a convertible or Targa version.” 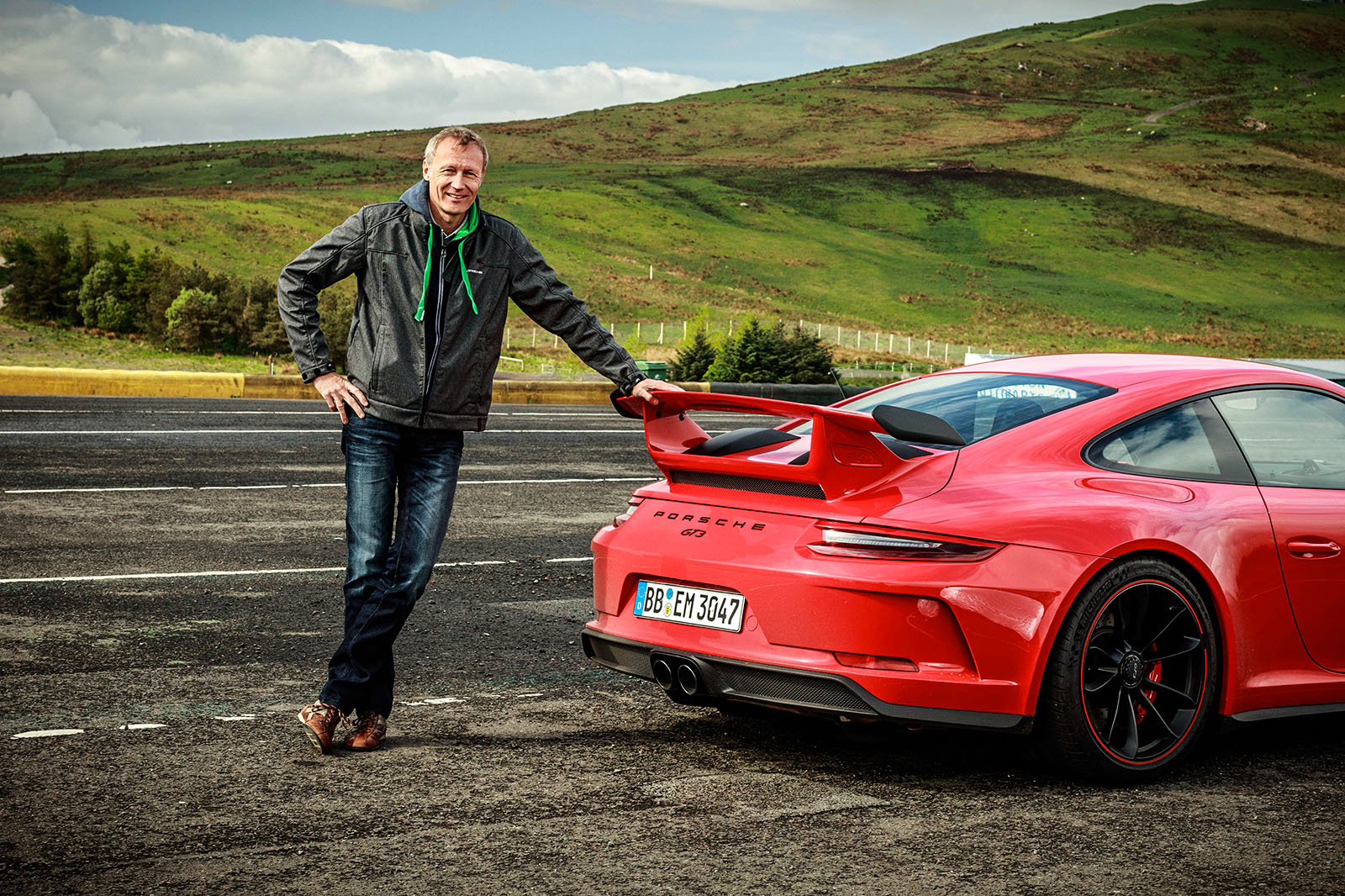 He describes the hallmarks of his cars as “precision, emotion and raw speed”, the order of priority depending on the car in question. “A GT3 RS is about precision more than anything else. A 911 R is equally about emotion,” he says.

The process for the creation of the GT cars is remarkably simple. Preuninger says: “We invent the cars within our own little Motorsport group and then have to sell them to the rest of the company. This is both time and nerve-consuming because we’re all slight maniacs in Motorsport and we cannot expect everyone else in the company to feel the same way. But we know we can’t just decide what to do: we have to make a business case and push it through the system.”

So what cars didn’t make it? He looks at me slightly quizzically before saying: “There is not a single car we’ve presented that didn’t get made. Not one. We have a 100% hit rate.”

Preuninger has now expanded the department to the point where it can make up to 100 cars a week. But he could sell plenty more. “I always want to make 10 fewer cars than the market desires.” He has another problem: when a new car is announced, the anticipated demand tends to double. “And you can’t just ring up your suppliers and order twice the number of parts. They might need to build a new factory to do that…”

So it appears certain that, at least on Preuninger’s watch, the GT cars will continue to be hardcore, thoroughbred products born from genuine motorsport programmes. From the kid with the white and blue 911 Carrera on the walls, to the man in charge of perhaps the most respected in-house tuning company of all, it is fair to say that Porsche has been rewarded by giving Preuninger his break. Seventeen years on, if the rumours about the power and performance of the new GT2 RS are true, it would seem he is far from done yet. In fact, he may just be getting into his stride.