BACK TO ALL NEWS
Currently reading: Hyundai Santa Fe on sale from 1 September priced at £33,425
UP NEXT
Grand touring: 1000 miles across Europe in the new Alpina B3

Hyundai has confirmed that the new Santa Fe will cost from £33,425 when it goes on sale on 1 September.

The fourth-generation SUV's opening price applies to the entry-level 2.2-litre diesel variant, which comes in SE form and with two-wheel drive. It includes 17in wheels, a 7.0in touchscreen infotainment system (with Apple CarPlay and Android Auto) and driver assist features such as lane-keep assist, among other standard features.

Opt for a £36,425 Premium model and the seven-seater gains 18in wheels, an 8.0in touchscreen infotainment system with live services and traffic messaging, plus wireless phone charging. Top-of-the-range Premium SE cars cost from £41,795 and add rear cross traffic alert with brake assist technology and 19in wheels.

The new Santa Fe's design is derived from the smaller Kona and Nexo SUVs, with split headlight clusters and a trapezoidal grille. At 4770mm long and 1890mm wide, it is 70mm longer and 10mm wider than the outgoing model. The additional length also brings about a longer wheelbase, with leg room for rear passengers said to have been improved.

Under the bonnet will be a choice of three engines, two of which are new to the Santa Fe. The existing 194bhp 2.2-litre diesel — the only unit offered on the current car in the UK — is the first to become available and will be joined by a new 2.0-litre diesel later on. A 2.0-litre turbocharged petrol engine will also be introduced to the range. An eight-speed automatic transmission will be available with all three units.

An electronic four-wheel drive system that's new to mass-market Hyundai models is also being used on the Santa Fe. Named HTRAC — short for 'Hyundai traction' — and previously used by Hyundai's premium sub-brand Genesis, the system provides multiple driving modes, is capable of sending up to 50% of torque rearwards and is likely to bolster the new Santa Fe’s potential as the most rugged and capable model in the Hyundai range. Torque vectoring capabilities are also part of the system, offering increased grip and control, the company says.

Technology takes a step forward over the previous model, with automatic emergency braking (AEB), lane-keep assist and lane departure warning all standard. A driver alertness system and other safety assistance features are also installed, as well as a voice recognition system with built-in artificial intelligence. It has yet to be confirmed if the latter system will make it to UK cars.

Also new to Hyundai is a Safety Exit Assist system, which uses sensors in the rear of the car to prevent rear passengers from opening the doors into the path of approaching traffic and warns front passengers if they are about to do so. Passive safety is taken care of with a 57% use of high-strength steel — the highest proportion across Hyundai's range and a 15% increase on the outgoing model. 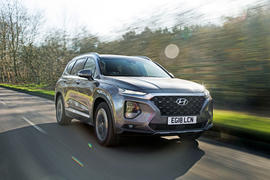 Looks good. The premium makers need to work harder on design to justify their increasingly expensive prices. This looks better than any 4x4 coming out of Munich just now. Way better.

This new Santa Fe just looks so much more desirable, expensive looking and just plain better looking than a dull and hardly prestigious looking X3, GLC or Q5 inside and out. And the design is so much more cohesive and balanced. And while it's not considered a premium brand, the Santa Fe looks much more premium than the Audi, BMW and Mercedes.

Hyundai's inspiration appears to have shifted from Ford to Citroen/DS. Still better looking than the efforts of BMW/Audi/Mercedes.

When viewing the initial sketches shown a few weeks ago I was really worried it would just look like a poor Citroen / DS copy, but the execution is so much better.  The Kona looked poorly executed at lauch, but the Santa Fe has made it look absolutely dire.  I wonder if my wife will trade in our current Santa Fe for this new one...?Also interested to see the specs for the 2litre diesel and if it will be coming to the UK.  Will the ecomomy and CO2 improvements outweigh the expected drop in performance over the 2.2?

It may look better, but there is more to looks...

We hired one of these in the US last summer and the driving seat was really uncomforatble - not enough cushioning, such that after exactly 40 mins at the wheel I would be in pain. We had a Ford Edge the previous week, and that was way more comfortable. And better built.

How did you hire something that is not launched yet?

Sorry, it was the current model we hired. My point was I hope they sort the seat/suspension out and not just the styling.

I think the ultra slim LED

I think the ultra slim LED headlight units look great, contrast these with the oversized, blobby units manufacturers such as Mercedes are currently fitting. And the high set central screen, with seperate climate control dials is surely much safer to operate on the move than, for example the tablet solution that Volvo is offering .

But why are most of the so-called premium manufacturers so poor at designing attractive SUVs. The Q3, Q7, GLE and all X BMWs (except new X2) are completely horrendous. Santa Fe, Sportage, Edge, XC90, XC60, NX and CX-5 are all better looking or more interesting than anything the German big three currently produce.