Hyundai has revealed a new N Line variant for its latest Tucson SUV, bringing what it calls “motorsport-inspired” exterior and interior tweaks and trim-specific tuning.

Channelling Hyundai’s ‘Sensuous Sportiness’ design language while offering more performance-inspired features, according to the car maker, the N Line targets customers who want a Tucson with “even more attitude”.

On the outside, the front grille has been made longer and wider and extra detail added, including the N Line badge. The front and rear bumpers are bigger than on the standard Tucson, too.

Additionally, an elongated aerodynamic spoiler has been fitted to the N Line’s rear, alongside a red reflector band and diffuser, and “aggressive” twin tip exhausts also feature. Customers can choose from seven exterior colours, including a two-tone option, from ‘Polar White’ and ‘Phantom Black’ to a ‘Shadow Grey’ coat that is exclusive to N Line. 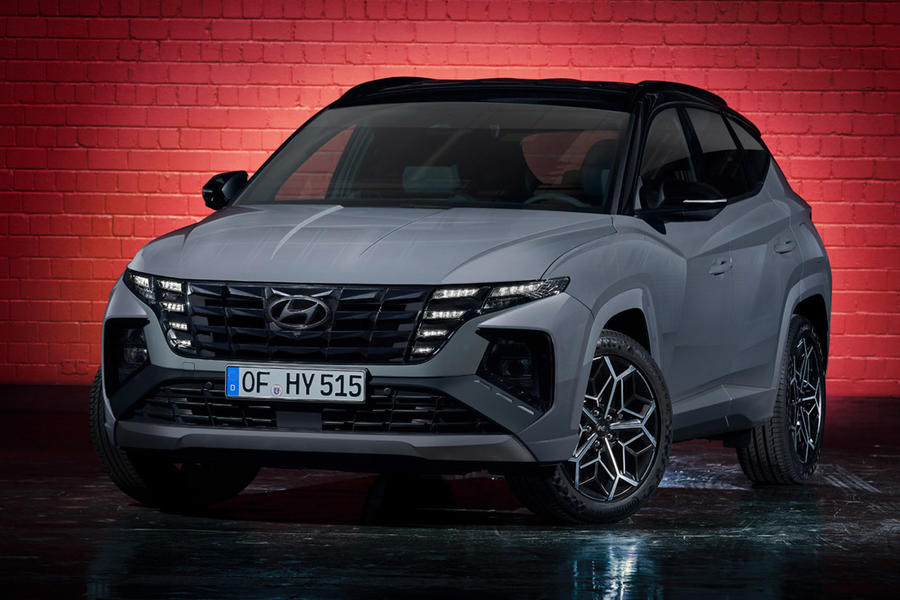 The styling additions continue inside, where Hyundai has ushered in red stitching, N logos and racier metal pedals, footrest and door steps.

In terms of suspension, the N Line is broadly unchanged from the standard Tucson if not equipped with the optional Electronically Controlled Suspension. However, Hyundai Europe has retuned the system to provide “even more driving fun”.

Also as with the standard Tucson, the N Line sports several powertrains. These include 148bhp and 178bhp mild-hybrid petrols, a 148bhp diesel, a 227bhp petrol hybrid and the 2021 Tucson’s new 261bhp plug-in hybrid.

The Tucson N Line, alongside the new standard model, will be delivered to customers in Europe this spring, with the hybrid and plug-in hybrid variants available from the summer. UK specifications and pricing for the N Line will be announced shortly.

Sensous Sportiness,well that's a new one on me,the N-Line does look good in grey ,plus the interior tweaks are very effective,but is there a proper Tucson N in the pipeline?

superstevie 27 January 2021
I like the alloys. Where's the rear door handle gone?