BACK TO ALL NEWS
Currently reading: Hot flagship for revamped BMW Z4
UP NEXT
Mazda to launch own version of new Toyota Yaris by 2023

BMW is putting the finishing touches to a facelifted BMW Z4 ahead of its expected Detroit motor show launch in January. The revised model is due on sale in the UK next April.

Only light exterior styling tweaks and small changes to the roadster’s interior will distinguish it from today’s three-year-old model.

However, plans for a new range-topping M Performance model look set to give the Z4 a timely image boost in the absence of a full-blown Z4 M to go up against the likes of the Audi TT RS roadster, Mercedes-Benz SLK55 AMG and Porsche Boxster S.

The Z4 has now been revealed - take a look here

The Z4 sDrive35iS expected to be replaced by a new Z4 M35i Performance model running essentially the same 335bhp turbocharged 3.0-litre straight six engine as the M135i hatchback, but with changes to its exhaust system for more a alluring sound.

The new range-topping Z4 model is set to adopt a unique styling package as well as a retuned chassis, with firmer springs and dampers and a reworked steering system for sharper dynamics. The tweaks are all in keeping with BMW’s recent M Performance models.

Among the visual changes that BMW design boss Karim Habib will bring to the Z4 are subtly reprofiled bumpers, altered light graphics and reinterpreted detailing, including new LED repeater lights along the flanks, as well as a new range of standard 17-inch and optional 18-inch wheels.

Inside, the two-seater is set to benefit from the latest version of BMW’s iDrive system, with new internet-based services. Sources also suggest that there are new instrument graphics and a revised range of trims in store for the Z4, although major changes to the dashboard architecture have been ruled out.

With new turbocharged 2.0-litre Z4 sDrive20i (181bhp) and sDrive28i (242bhp) models having recently being added to the range, the main changes to the engine line-up look set to centre on the existing Z4 sDrive35i. It is set to receive the latest version of BMW’s 3.0-litre turbo six, boasting an added 14bhp to take it to 316bhp. 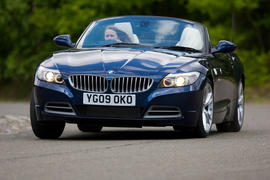 Seems this car got very average reviews despite using very similar platform and engine to the old M coupe or the new M135i.

I drove one before I bought my 370Z, it seemed very everyday usable - plenty of torque, and had a more refined engine and interior than the Z, but was missing both the sharpness and the fun factor.