BACK TO ALL NEWS
Currently reading: Honda NSX Type R and all-electric models planned
UP NEXT
How a sat-nav can make you faster around a track

Project boss reveals plans for up to five different versions of the NSX; Type R would be ‘most focused version’
Share
Open gallery
Close
Share story

The Honda NSX is considered by its maker to be “a platform” rather than a single model, meaning that a whole host of different versions are likely to be launched over the model’s life cycle.

According to NSX project boss Ted Klaus, Honda is contemplating convertible, lightweight, non-hybrid and all-electric versions, one of which is set to wear the Type R badge. The NSX, which will reach the UK in right-hand drive form this autumn, will initially have a hybrid powertrain, with a twinturbo 3.5-litre V6 combining with three electric motors for a total 573bhp output. The car is currently in production in the US, in a new factory in Ohio called the Performance Manufacturing Centre.

Honda intends to use the new facility to produce the different versions in order to get a return on the significant investment it has made in the new NSX, a model it hopes will reinvigorate the firm’s performance image.

With the standard NSX (pictured below) in production, Klaus said it represented an opportunity for Honda to “experiment” with new technology. “It’s a special car, with new technology, developing technology, that we can be leaders in and help us understand where the brand is going,” he said.

Klaus said Honda was now at various stages with the NSX. It had completed development of the standard model and was starting to look at the NSX as a platform and a way to “start to dream of new technologies”. 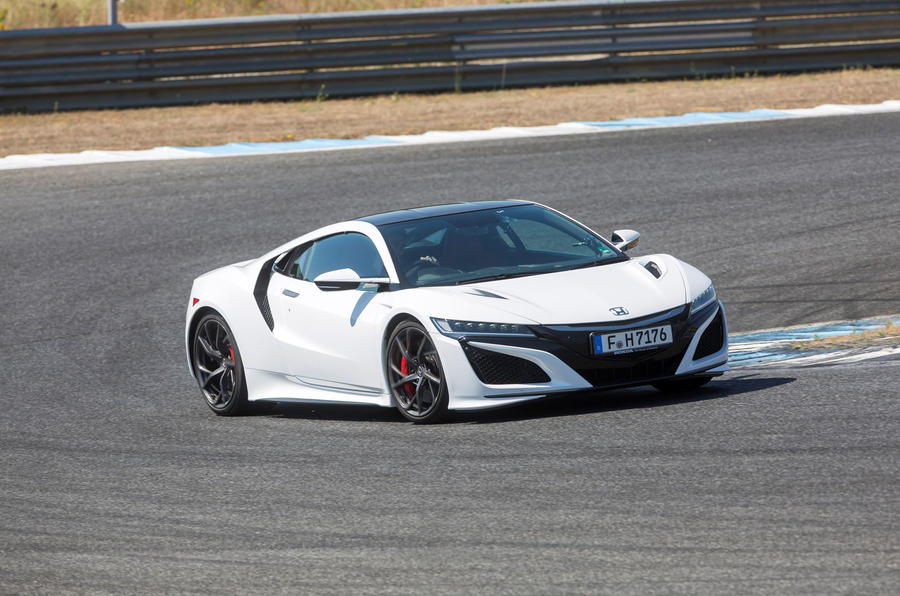 Honda entered a lightweight version of the NSX in the recent Pikes Peak rally event in the US, and Klaus said it was “the general direction we wish to go” with the NSX.

He added that making a “more pure, simplified version” was “in some ways more straightforward” and that there was “an appetite for it” within Honda.

Honda also entered an all-electric version of the NSX at Pikes Peak, with four individually controlled electric motors. Klaus said the team wanted to investigate torque vectoring while testing battery durability and power electronics, which are two other engineering obstacles standing between the car and production. “There are other technical issues to solve, but that’s why we had one there,” he said.

He also said there was “nothing in the way of it being non-electrified”, meaning a purely petrol-powered NSX was another likely model, which, in combination with a lightweight body, could make for a Type R version.

Klaus said any Type R Honda needed to be “the most focused version of any platform” and that the base car had been, in effect, over-engineered in order to accommodate harder, faster versions and different powertrains.

On the subject of a convertible version, he said: “We can dream one day about it losing its top.

If memory serves, the original NSX was barely selling at all by the end, so maybe it *needed* some evolution...
TegTypeR 11 July 2016

I have an emotional conflict

I have an emotional conflict about this news.

One part of me thinks it is great that Honda are running with the new NSX design and engineering and the hope is that this is just the start of a brilliant design, that we are going to see a lot from it.

The other part of me feels sad that unlike the original NSX, the differences between the first and last cars off the production line will be significantly different.

The first NSX was a work of art and during its life span, relatively very little changed mainly because it didn't need to. The original concept was so well nailed down that all it needed were some subtle tweaks.

Yes, you could argue that this is the modern motor industry and we are in technologically changing times but it is sad none the less.