BACK TO ALL NEWS
Currently reading: 2016 Honda NSX - GT3 racer to inspire chassis set-up
UP NEXT
New 2022 BMW 8 Series gets M-car makeover

Racing car tech and motorcycle division to influence road model. First deliveries are due this autumn; insiders say the car is sold out for at least two years
Open gallery
Close

Development boss Nick Robinson has revealed that the new Honda NSX hybrid sports car is benefitting from Honda's car and bike racing efforts, with a direct transfer of technology and expertise from its GT3 and motorcycle divisions.

The American-developed sports car has already spawned a GT3 racing version, and Robinson said data collected on the race track will be transferred across to help improve the setup of the road car.

"In North America, we’ve just unveiled the GT3 version of the car, and the development team of the street car has had some involvement in its development," he said. "What works well on the track will inform future iterations and updates of the street car and vice versa." Robinson's words suggest a future Type R model could be even more track-focused than previously thought.

He added that the clever packaging of motorcycles has also helped to improve weight distribution of the hybrid drivetrain. "For many years our motorcycle development teams have strived to ensure the optimum centralisation of mass, ensuring the lowest possible centre of gravity," he explained. "This leads to the best possible yaw response."

The first customer NSXs are due to reach UK shores this autumn, with a sticker price of £137,950. Insiders say the all-new sports car is sold out for the next two to three years already, with deliveries for the first 100 orders arriving between autumn 2016 and 2017. Production for the following 100 orders will commence after this.

Although Honda UK isn’t able to confirm precisely how many examples of the tech-laden supercar will come to the UK, a spokesman told Autocar earlier this year that it will “remain a relatively rare sight on the roads” in order to preserve exclusivity. As far back as 2014 Honda UK accepted £5000 deposits from around 100 customers and closed the pre-order books for the NSX.

Honda has confirmed that Europe is the “leading export region” for sales of the NSX. It will be sold through a “limited network of authorised dealers in key European locations”.

The very first NSX - which is being sold under the Acura brand in the US - was sold at auction for charity at the end of January for a massive $1.2 million. 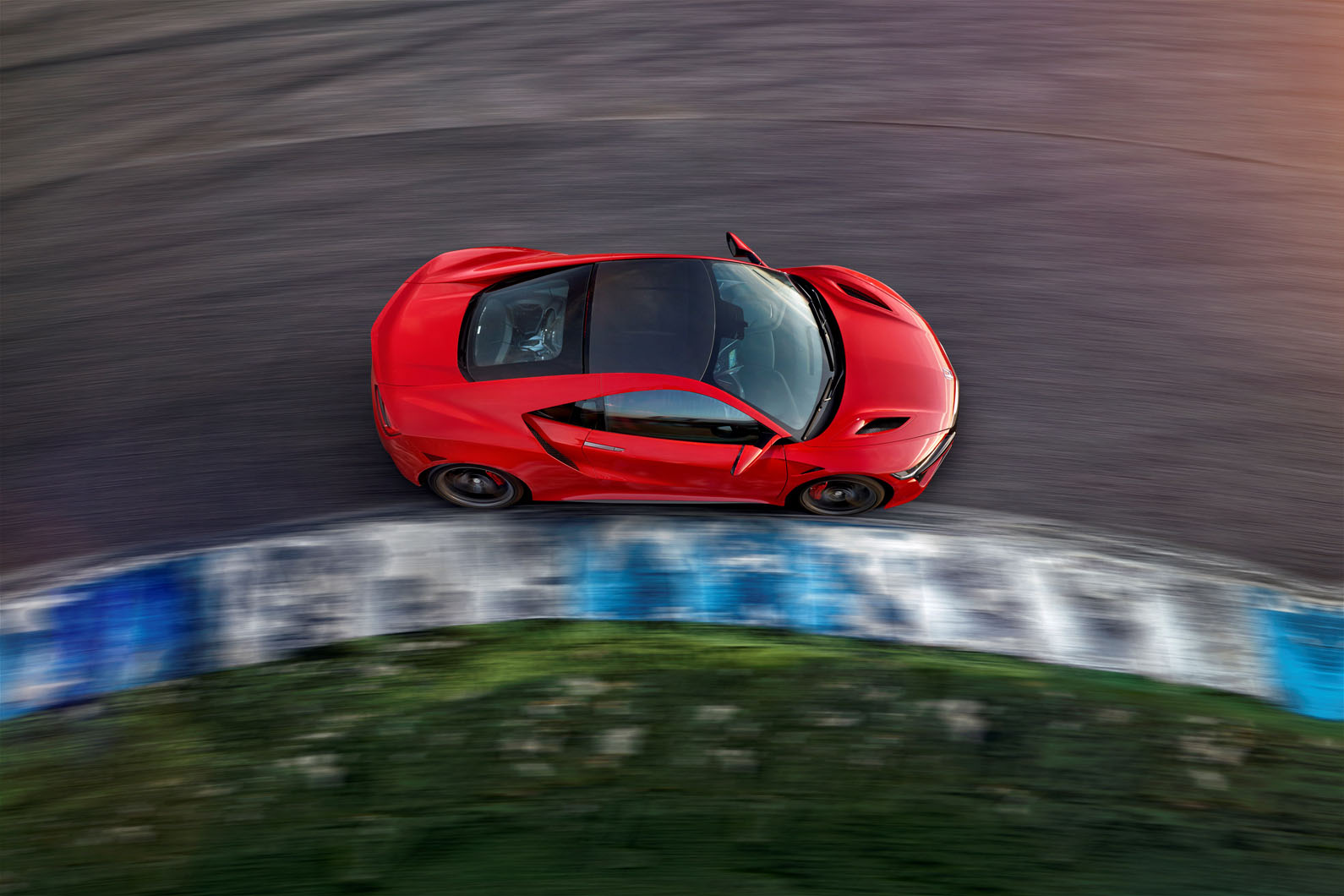 The European version of the Honda NSX was revealed for the first time at the 2015 Geneva motor show, while the car was originally shown at the Detroit show some 25 years after the launch of its iconic predecessor. Its most recent public appearance was at the 2016 Goodwood Festival of Speed.

The new, second-generation car has been developed in the US and will be produced in the new Performance Manufacturing Centre in Marysville, Ohio, with about 100 technicians working on the build of the car.

Although the new NSX is built around a lightweight structure and has a mid-mounted V6 engine, that is where the resemblance to the all-aluminium original NSX ends. The new model has a petrol-electric hybrid powertrain driving all four wheels and a new multi-material structure with an ultra-stiff carbonfibre floor.

The heart of the NSX’s powertrain is a 75-degree, twin-turbocharged V6, which drives an all-new nine-speed dual-clutch automatic gearbox. On top of this, the NSX’s sport hybrid system incorporates three electric motors. The total system output is 550bhp at 7500rpm, with torque rated at 406lb ft.

Those power outputs allow the NSX to reach 62mph in 2.9 seconds, with a top speed of 191mph.

The V6 has a dry-sump lubrication system and ‘compact’ valvetrain designed to allow the motor to be mounted as low as possible in the body, helping to lower the car’s centre of gravity. Honda says the nine-speed DCT is capable of “synapse-quick” shifts and executes rev-matching downshifts.

One of the three electric motors is housed between the engine and gearbox and is said to support “acceleration, braking and transmission shifting performance”.

The other two motors are mounted on the NSX’s front axle. Each motor drives an individual wheel, not only delivering “instantaneous torque”, according to Honda, but also providing dynamic torque vectoring.

The NSX has four switchable chassis modes. Quiet mode allows the car to be driven on battery power only for short distances. The other modes - in an ascending order of dynamism - are Sport, Sport+ and Track. Honda claims the latter “reveals the full spectrum of the NSX’s capabilities”. 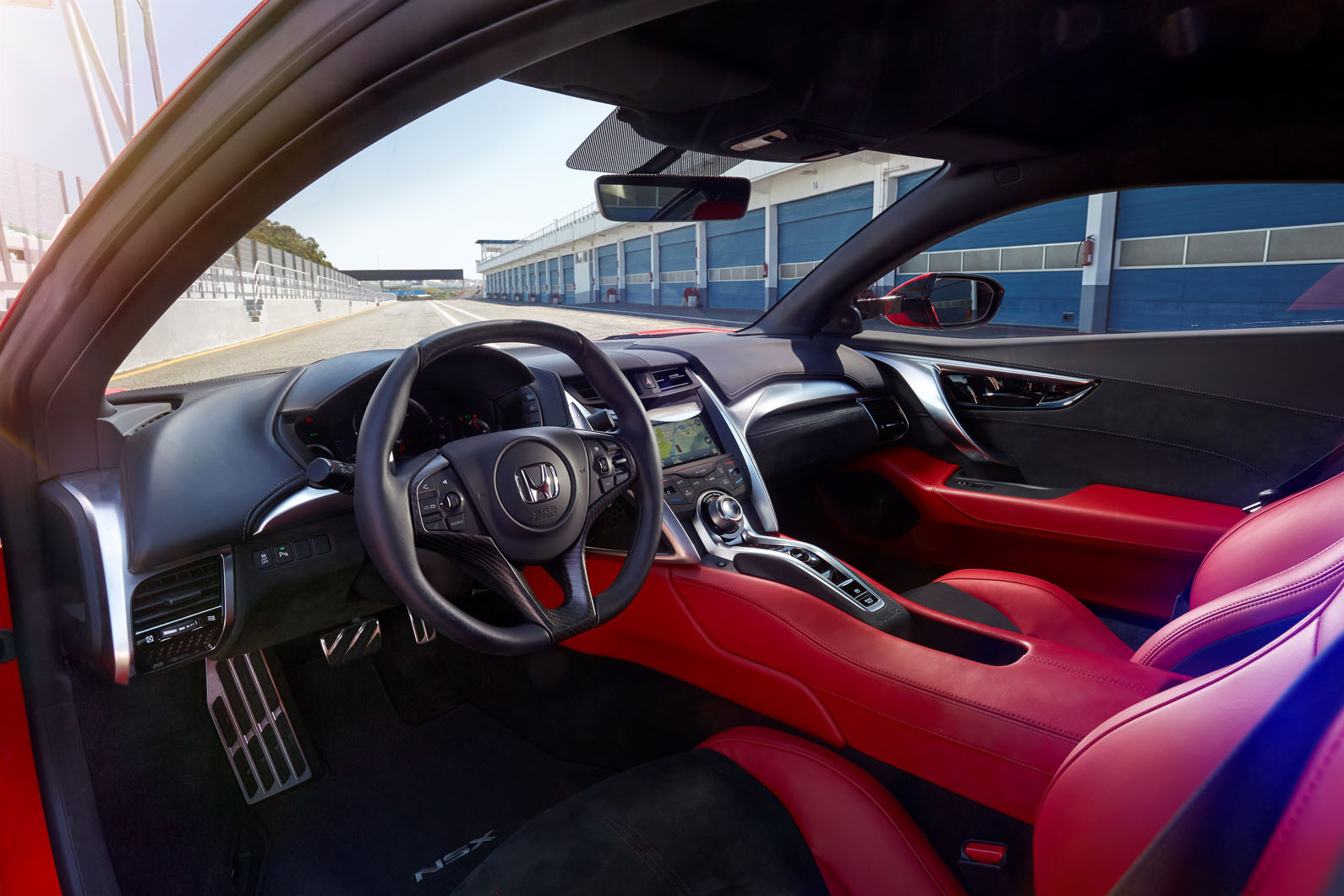 During the NSX's development, chief engineer Ted Klaus told Autocar that the complex electronics would be tuned to only intervene if they improve the driving experience. In particular, he highlighted the possibility of using the electric motors to deliver instant throttle response, or to allow silent all-electric drive. "The NSX must stay true to the role it created, of being an everyday exotic," said Klaus. "That means we must only use the new tech to support the driver to live with the car every day, and to give the driver a car with a depth of abilities that they can peel away with familiarity, as they get to know the car.

"The technology gives us a chance to create a car that is focused on being agile, precise and linear in its responses like never before. We are looking to do more than chase numbers on paper - as with the original NSX we won't have the most powerful car in the category, for instance, but we believe the human element is more important than that. Whatever we do, the driver must be at the centre of the experience, not the car."

The structure of the new NSX is described as a spaceframe design that is constructed from ultra-high-strength steel and aluminium. The floor of the structure is made of carbonfibre and the cabin features “ultra-thin” A-pillars.

The NSX also features a “world-first [aluminium] casting process that combines the benefits of both cast and forged components”. The body panels are made from a combination of aluminum and sheet moulding composite.

At 4470mm long, the NSX is about 40mm longer the original, as well as 130mm wider and 45mm higher. The front track is a significant 145mm wider and the rear track 75mm wider. The car’s shape was aerodynamically refined in Honda’s Ohio wind tunnel.

Under the skin, the NSX’s T-shaped battery pack is mounted down the car’s centre tunnel and behind the seats. Suspension is by aluminium  double wishbones all round and the car rolls on 8.5x19in front and 11x20in rear wheels.

The braking system features carbon-ceramic discs with six-pot calipers on the front and four-pot calipers at the rear.

The Nissan GT-R, Porsche 911, Audi R8, Ferrari 458 and McLaren 12C are among the competitors that were used as benchmarks by the development team, according to Klaus. “We’re looking for the excitement of the 458 at the price of the 911, and we think the hybrid technology can help us achieve that,” he said.

“The NSX has never been about a set of figures on a piece of paper,” he added. “As with the original, the eventual power figure won’t grab headlines, for instance, but the qualities that you can’t write down, such as driver involvement and pleasure, are the ones that will matter. As engineers, we like numbers, but I’m acutely aware that if we build this car against a set of criteria that has been written down, we will lose our sense of focus.” 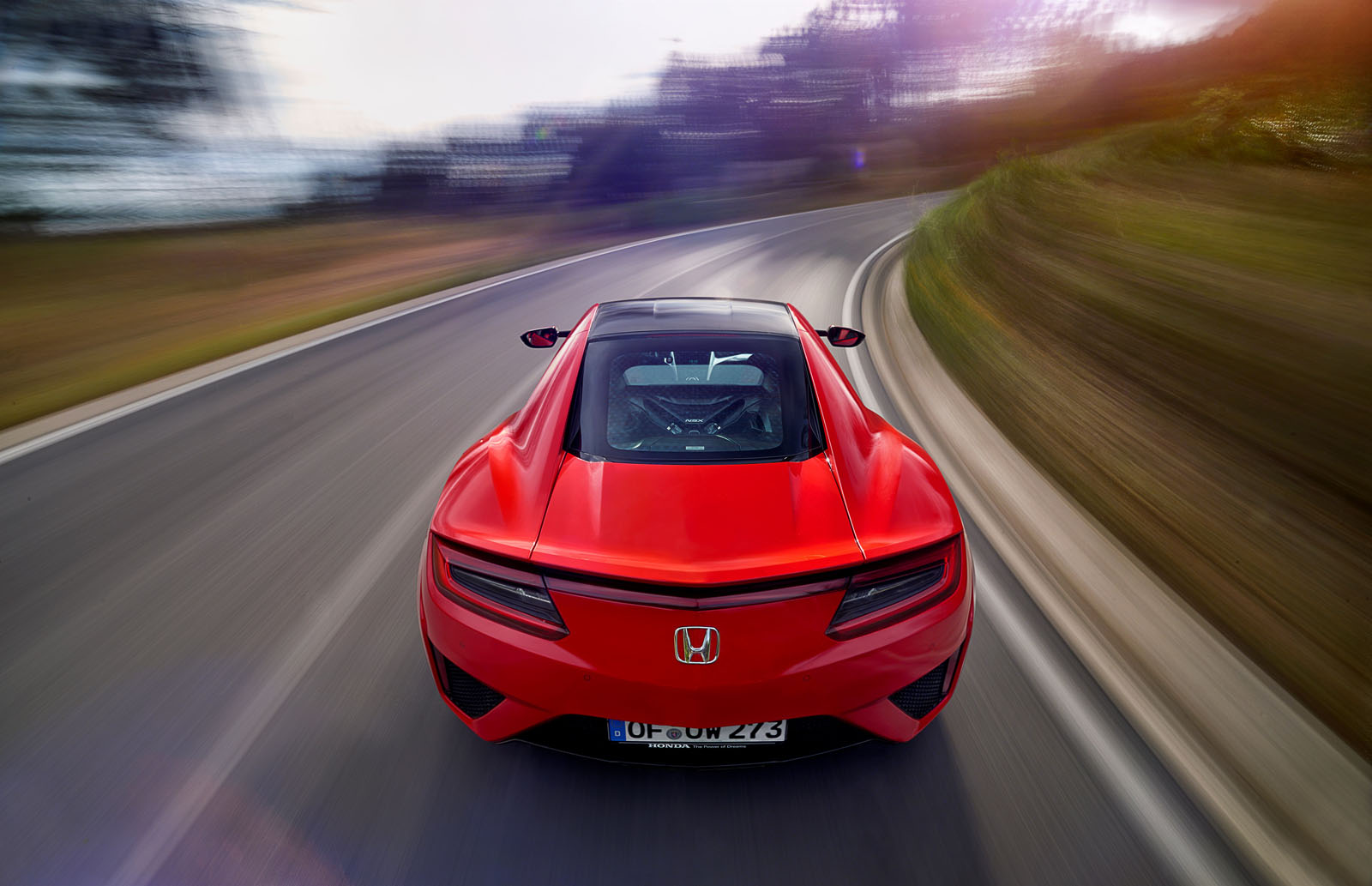 Sources have already suggested that a Honda NSX convertible will likely be made.

Honda's president, Takanobu Ito, has also hinted a racing NSX will be made. Speaking at the launch of the original concept car at the Detroit motor show in 2012, he said: “It is a car that is up to the performance of racing and, while this car is for customers, you might see it racing as well. Since 2005 we have strived to make a successor, but global change has had a colossal effect on the industry in that time. Even a supercar must respond to environmental responsibility. This car is about high performance through efficiency."

I don't see many people paying that much for a Honda, even if its called 'NSX'. It doesn't look exciting enough and its too heavy.
Factczech 15 August 2015

This a corporate failure of epic proportion! If it were a Boeing ( 787 ) the media would be awash with put downs and negative remarks.
Ford turned out a car of excellent design and technical ability within 18 months and shocked the world, yet Honda who was working on this NSX for the greater part of 4 years can't get a final product to market. The excuse making and lack of serious questioning by the media is pathetic in the least. Look at their F1 programme, all over the place, truth is they are not that technically advanced as they once were and nostalgia is a costly thing. Everyone here seem to think that it is a great looking? Car, but really? When we see the GT, F458, P1,919 and the Huracan that NSX is already aged!
Ownership of that would be a nightmare- who wants a car with 3 engines? Could you imagine servicing cost over the life of such a car? I predict they would somehow remove an engine at the very least.
The original NSX was a gem this is an overengineered piece of automotive overindulgence.
LP in Brighton 14 August 2015

What do they men, "change in engine layout"

It could mean a change from transverse to in line mounting, or a change in angle of the V configuration, or change from mid to rear mounting... practically anything really. Either way, it implies a fairly drastic change at a late stage of development, suggesting that Honda really doesn't know what it is doing.
Let's hope the company gets it right next year.
View all comments (30)