BACK TO ALL NEWS
Currently reading: Gunther Werks reveals 435bhp-plus 993 Speedster Remastered
UP NEXT
Out of character cars: Nissan Nismo GT-R vs Toyota GR Yaris vs Alpine A110

Californian Porsche customiser Gunther Werks has introduced the 993 Speedster Remastered as an open-top version of its potent, retro-inspired take on the final air-cooled 911.

Gunther Werks calls the new creation an “open-air model that not only heightens the experience with the rush of wind through your hair, but also pushes the boundaries of performance to build a stronger, lighter, faster car”. The coupé version is said to hold a lap record for a road-legal, air-cooled Porsche 911 at Laguna Seca, having achieved a lap time of 1min 30.99sec last year with 24 Hours of Daytona winner Randy Pobst at the wheel.

Like the coupé, the Speedster features a performance-focused aftermarket suspension set-up and takes its power from a heavily modified 4.0-litre flat six supplied by Rothsport Racing that sends its power to the rear axle through an upgraded version of the original 993’s Getrag manual gearbox.

Precise technical specifications have not been revealed, but the tuning house promises a “modest” increase over the hard-top car’s 435bhp and 335lb ft outputs. 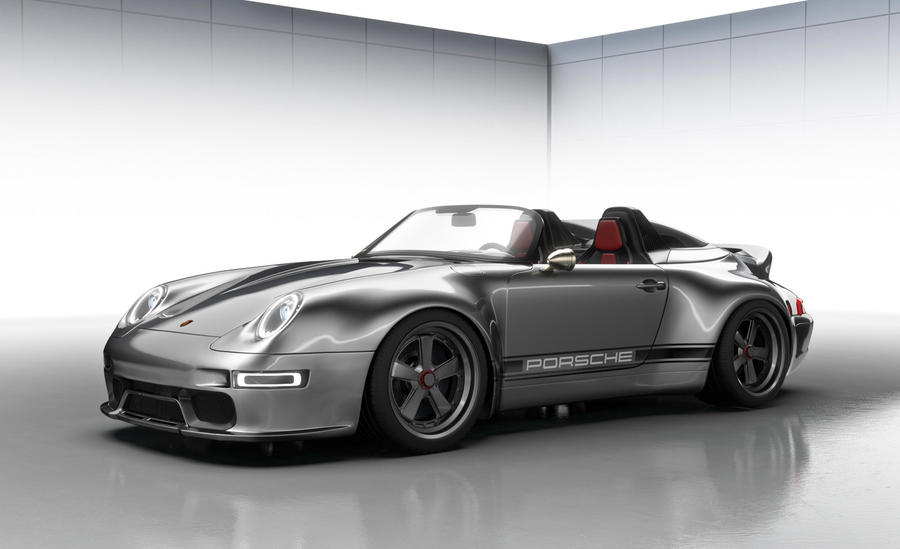 Removing the roof panel from the 993 Remastered required “extensive” modifications to the chassis and bodyshell. Structural reinforcements occupy the cavity where the rear seats once were, and a new roll-cage and hoop set-up has been introduced to improve both safety and rigidity.

The fabric roof is stowed beneath a bespoke, carbonfibre folding rear deck panel, featuring a pair of prominent streamliners in homage to previous Porsche 911 Speedsters from the 930 and 964 generations. The prominent ‘duck tail’ rear wing with ram air scoop is another retro nod to the 911’s heritage, modelled on that which adorned the 1973 Carrera RS 2.7.

The Speedster is further differentiated from the coupé with a lower-rake windscreen, with buyers offered the option to remove the glass entirely, and a reshaped front bumper - now carbonfibre - that is claimed to enhance aerodynamic efficiency. The single-skin front bonnet is said to be more than 25% lighter than the coupé’s double-skin item, and further weight is shed with the aid of optional centre-lock Fuchs-style alloys, which reduce unsprung weight. Elsewhere, the Speedster gets new 3D-printed Inconel exhaust outlets, aluminium wing mirrors and door handles, and new acrylic covers for the 911’s wraparound front reflectors.

Inside, the original dashboard has been replaced with a carbonfibre panel housing LED shift lights and a gauge cluster milled from a single piece of aluminium. Repositioned and redesigned pedal arms are said to give a “more ergonomic positioning” than the original 993 911, while the hollow carbonfibre seat shells sit lower in the car for reduced drag and a lower centre of gravity.

Gunther Werks has yet to confirm pricing for the new model but will build just 25 examples of the Speedster, and is likely to bump prices up slightly over the equally exclusive hard-top’s circa-£400,000 conversion cost. Production is set to begin in early 2022, when all examples of the coupé have been completed.

Gorgeous car, not much else to say really.