BACK TO ALL NEWS
Currently reading: Gordon Murray T50: hypercar's V12 revs to 12,100rpm in new video
UP NEXT
Rodin FZero: V10 weapon aims to be world's fastest car

Gordon Murray Automotive, which is set to unveil its new T50 hypercar in May, has released a video that shows a three-cylinder test version of the hypercar's V12 motor revving to 12,100rpm.

The £2.3 million ‘analogue’ hypercar, to be built at Murray’s new Dunsfold factory, will move immediately after launch into a prototype build and development phase, before production build-up begins during 2021.

Gordon Murray Automotive reveals the website for the new ‘T.50’: the purest, lightest, most driver-focused supercar ever - https://t.co/8s8KYDV0TH“We expect this to be the last and the greatest analogue supercar ever built.” – Gordon Murray CBE#FanCar #T50 #Supercar pic.twitter.com/pRq5NE9xd6

The first of the planned 125 cars – 100 road cars and 25 purely for the track – will reach its new owner at the beginning of 2022 and production will continue for a year.

The mid-engined T50’s all-important aerodynamics package is being developed with the assistance of the Silverstone-based Racing Point Formula 1 team, formerly Force India. Access to the team’s moving-floor wind tunnel, plus the expertise of its F1-trained technicians, will allow Murray to use large-scale models to refine the T50’s revolutionary active aero package.

A three-seater with a central driving position, the car combines the unique qualities of Murray’s two most iconic creations in a stellar 50-year, 50-car career: the seminal, ultra-light McLaren F1 three-seat supercar of 1992 and the Brabham BT46B grand prix ‘fan car’ of 1978, whose extraordinary levels of downforce briefly stood F1 on its head and took one race win before the team withdrew it in the face of opposition from rivals. 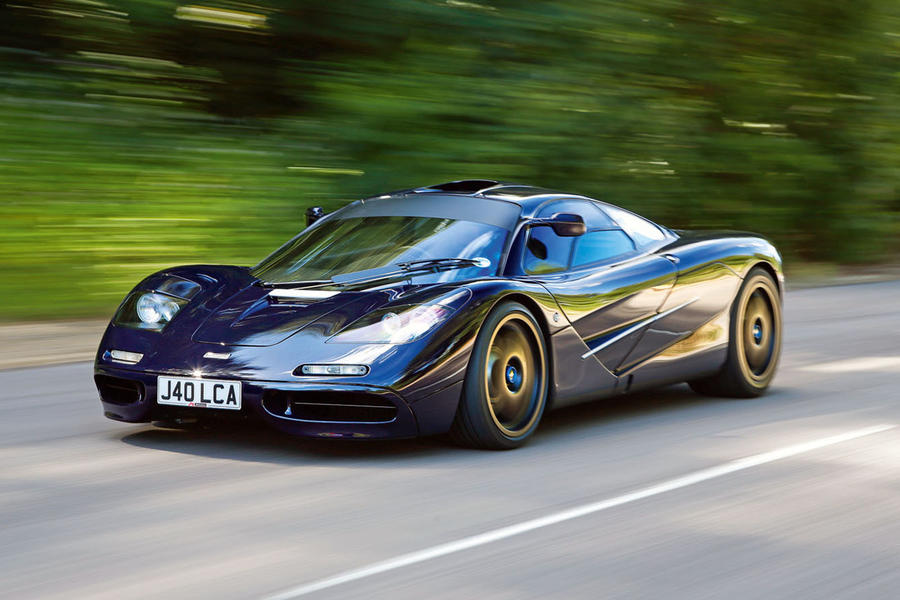 The new T50’s most striking feature is a 400mm rear-mounted electric fan, designed to extract air rapidly from beneath the car, radically increasing downforce and grip. The aero set-up can be configured in six different modes, two of them automatic, the rest driver selectable. They vary from the super-slippery Streamline mode to the High Downforce setting, for use when exceptional stability and traction are needed.

The first details of the T50 emerged last summer, when it became clear that it would use much of the packaging and technology of the F1, simply because, in Murray’s view, there isn’t a better way of doing it. The car has an all-new carbonfibre tub

At the front of the engine, a 48V integrated starter/ generator connects directly with the crankshaft. It acts as a starter motor, then converts to a generator to produce the power needed to spin the lightweight fan at speeds of up to 8000rpm.

The V12 is mounted very low in the T50’s all-carbonfibre tub, driving the rear wheels through a six-speed H-pattern manual gearbox built by Xtrac. Murray says most buyers are “relieved” by the presence of a proper stick shift, but he directs those who prefer paddles to the 25 late-build track cars, which will probably use them.

In another nod to traditional driving, the T50 avoids hybrid technology: Murray says it would increase kerb weight far beyond the current figure of just 980kg, with many knock-on disadvantages. He wants the T50 to be seen as the spiritual successor to the F1 in its lightness, compactness and space efficiency, with those properties all enhanced by the use of modern materials and techniques. 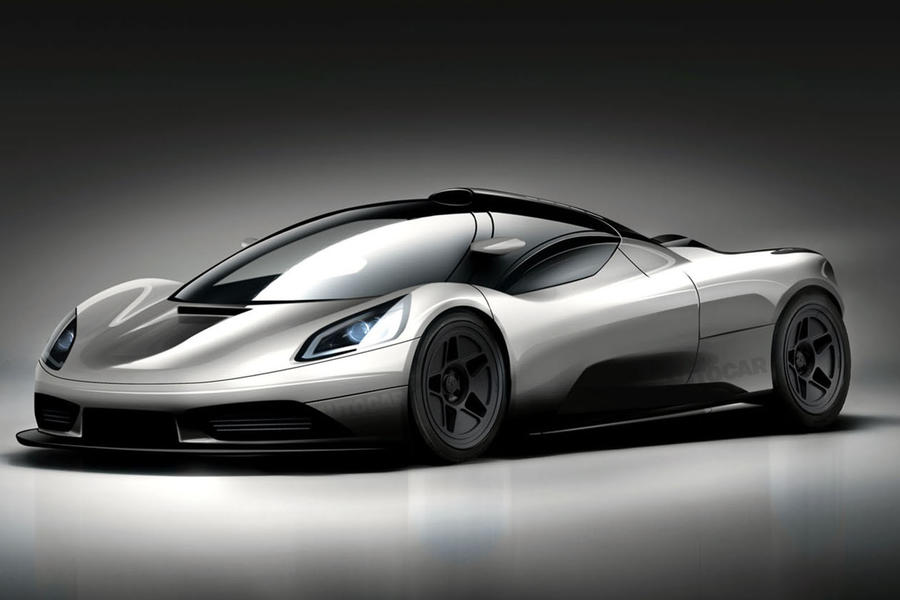 The T50 is just 30mm wider and 60mm longer than the F1, having about the same road footprint as a Volkswagen Golf. “No one else makes supercars our way,” said Murray. “I’m happy about that.”

The car needs very little obvious upper-body aerodynamic addenda, allowing for a purer front-end shape. Although the frontal styling has yet to be revealed, Murray says its relationship to the F1 will be clear.

Downforce is generated either by an active tail spoiler or via a large venturi beneath the body, a system of slots and ducts with the 400mm fan at its rearmost extremity. The feed of underbody airflow can be varied by the opening or closing of slots ahead of it.

The T50’s two automatic aero modes are Auto (which optimises use of the fan, the rear spoiler and the underbody diffusers) and Brake (which opens the spoilers and runs the fan at high speed, sucking the car onto the road and increasing both stability and rolling resistance).

The driver-select aero modes are High Downforce and Streamline, which cuts drag by about 10% by closing underbody vents and speeding the fan to create a ‘virtual longtail’. There’s also a Vmax mode, a kind of ‘push to pass’ setting that adds 30bhp for up to three minutes. Near the top speed, the ram effect of a roof-mounted induction air scoop (a Murray favourite) boosts power to about 700bhp. The final aero mode is Test, which allows an owner to demonstrate the functioning of the aero system when the car is stationary.

Most T50s are already sold, although there are still “a few” opportunities for buyers. Murray said he is pleasantly surprised at the comparative youth of the latest crop of buyers: 40% are under 45 and three are buying their first-ever supercar. “People tell us the McLaren F1 was their poster car when they were growing up,” said Murray. “Now that they’ve built successful businesses, T50 has become their F1. We’re very happy with that.”

Why the fan makes so much sense

Aerodynamic downforce is a great thing to have when you need it, explains Gordon Murray, and that’s principally between 60mph and 100mph, the point at which your car benefits most from greatly enhanced cornering adhesion. It would be nice to have downforce that works lower down, too, but passive aero gadgetry doesn’t provide it. 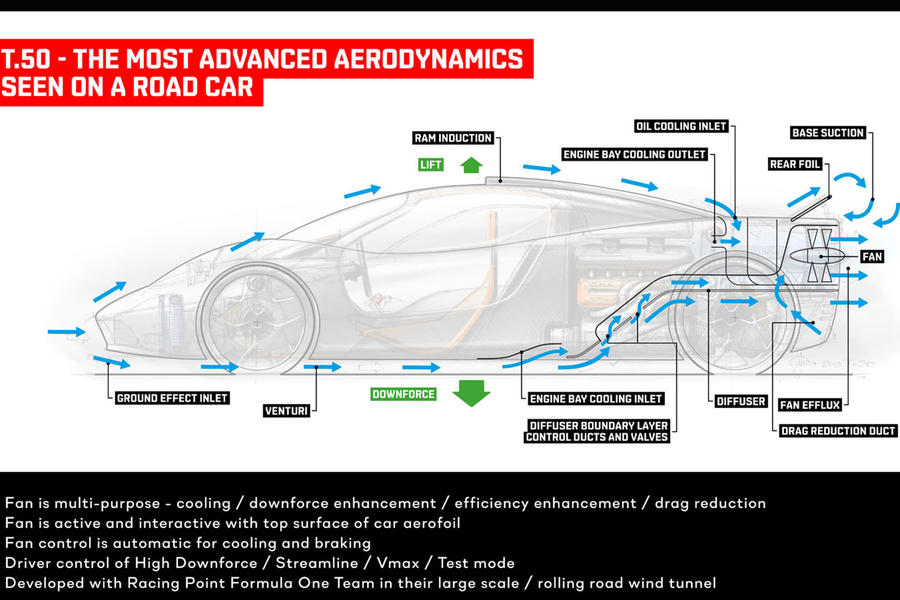 When going faster, you could often do with less aero effect. “Aerodynamic load rises as the square of speed,” Murray says, “and so does drag. Which means many cars with serious performance use up their suspension travel at high speed, which is about the last thing you need. You can reduce it with expensive, bulky variable-rate complexity, but who wants that?”

All of which, in a nutshell, makes the case for the T50’s brand of variable, fan-based downforce. The system is tunable and delivers exactly as you want it to. You can use it to help stop your car from seriously high speeds. And you can adjust it for decent stability yet good ride quality while cruising autobahns at 150mph. In short, it looks like one of those things, once explained, that every serious future fast car will need.

Even Baldrick wouldn't put a fan on the back!

It's another Murray fantasy and why does it have so little torque? He's just decided to reference his Brabham fan car from back in the day. Does this car have skirts? How will it work otherwise? How will skirts work on a bumpy road?

As if safety legislation will permit an exposed fan like that at the back of a car blowing debris everywhere, and it will soon clog up with dirt. Just ask Volvo Bus about the problems with their side rear mounted, hidden away fans from a few years ago.

I hope this virus does not kill this project

It is so left field and sounds so good.    Carries on the mantra of just add lightness.

Nice to talk about something positive in these times.

Yes, another great car by Mr Murray, but, will it ever see the main road, his other bit of brilliance,as far as I know, didn't.

Yes, another great car by Mr Murray, but, will it ever see the main road, his other bit of brilliance,as far as I know, didn't.

Why wouldn't it? He offered istream, but this is his own baby. Point fingers at TVR first - who cannot trace a leaking factory roof.

I doubt Murray could be that stupid.