BACK TO ALL NEWS
Currently reading: Exclusive: Gordon Murray tells Autocar about his 2022 hypercar
UP NEXT
2024 Mercedes C-Class EV spearheads brand's electric rebirth

As Gordon Murray lays out preliminary details of his 2022 T.50 hypercar, we speak to the father of the McLaren F1 to find out why he's not obsessed with lap records, how the model will achieve segment-leading downforce figures and why it will be better than 1994's fastest car in every way.

How do you relate the T.50 to the McLaren F1 you designed?

“It’s fair to call T.50 today’s equivalent of the F1. That was certainly our intention. Of course, it’s very different because the materials and technologies available today are so much better than they were. I look at the toolbox we’ve got at our disposal now and it excites me more than ever.”

Does your different approach with the T.50 mean you don’t think much of current hypercars?

“Not true. I’ve driven them all and many are brilliant. Most are amazingly capable. But they’re nearly all heavy, which is something you can disguise at times but which really tells when you’re talking driver involvement. You simply feel the weight. Heavy cars don’t get the hairs on the back of your neck rising the way a powerful, ultra-lightweight car does.” 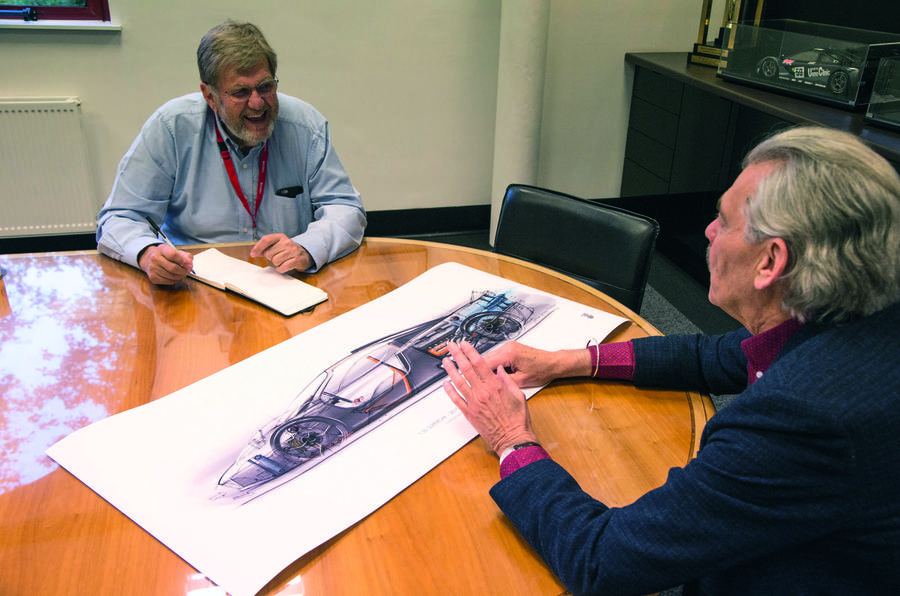 Why are you determined not to chase lap records and performance figures with the T.50?

“I just don’t see the point. F1 was quick and T.50 will be quicker. In any case, you’re on a hiding to nothing. Pick some extraordinary top speed, design your car to attain it, and soon someone will come along and beat it – because it’s all he wants to do. Building your car to chase targets compromises it in other ways and we’re trying to build an uncompromised car.”

You talk a lot about the disappearance of clean and pure styling. What’s that about?

“Modern supercar styling can be pretty ugly and the excuse is that the car has been ‘styled by the wind tunnel’. I think that’s cobblers. It shouldn’t be true. With our fan providing T.50’s downforce, we can give it ideal proportions and clean lines.”

And the T.50’s styling extends to the engine bay?

“Very much so. We did it with F1 and we’re doing it better this time. We won’t just have a big composite panel that looks a bit like an engine, as others do. You’ll be able to see our engineering. We’ve even designed the engine with internal galleries for the pipes and wires so you’ll see beautiful cam covers, inlet trumpets and exhausts. It’ll look like engines are supposed to look.”

The F1 had a gold-lined engine bay. Will you do that again?

“It’s possible. If gold is still the best medium for reflecting heat when we get to build our cars in 2022, we’ll probably use it.”

Why not make an all-electric hypercar?

“Just about the most ridiculous thing you could do at present is make an electric supercar. With batteries in their current state, you’d end up with something that weighed two tonnes, would go well in a straight line for a while, but wouldn’t corner because of the weight, and wouldn’t have much range. Our new car is the opposite of an electric supercar in just about every way.”

Sounds AMAZING but I Disagree on One Point

Many modern supercars look fantastic - wind tunnel or not.  I wouldn't want my supercar to look subtle.  I'd want it to look like a spaceship on wheels.  On LSD.

I think the spec for this car

I think the spec for this car sounds amazing but the reality is that, at £2.5m a pop, only a limited number will be made and even fewer driven regularly.

It makes the Alpine all the more impressive (Murray is a fan, of course)... a lightweight, relatively accessible sports car. What if Caterham had stayed involved and developed an open top version with a manual box and NA engine...?