BACK TO ALL NEWS
Currently reading: New Ford Ka+ to cost from £8995
UP NEXT
New 2022 BMW 3 Series brings redesign and tech upgrades

The Ford Ka+ will go on sale in the UK next month, with prices starting from £8995. Ford's new city car, which is roughly the same size as the Ford Fiesta hatchback, replaces the Ford Ka and is designed to satisfy the appetite for smaller, cheaper cars in the UK.

The model, built in India and sold there as the Figo, has been heavily revised for Europe, because Ford is desperate to avoid the quality difficulties it had a couple of years ago with the Ford Ecosport crossover from the same source.

Only one five-door hatchback bodystyle will be offered, in two trim levels, Style and Zetec.

There will be just one 1.2-litre four-cylinder engine, too, closely related to the 1.25-litre engine found in the Fiesta but cheaper to make. It will come with a choice of two power outputs - 69bhp and 84bhp - although the lower-powered engine won’t be offered at launch. 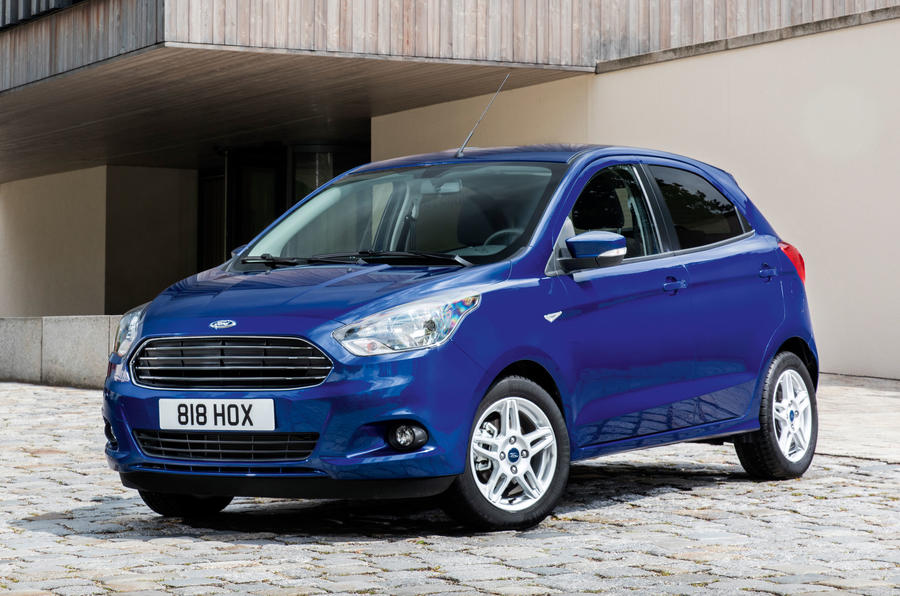 Darren Palmer, Ford’s boss of B-car projects, believes the higher-output, £10,295 Zetec will be the most popular model but points out that even the entry-level car is well equipped.

Palmer is at pains to point out that the Ka+ suspension has been fine-tuned by Ford of Europe’s experts at the Lommel proving ground in Belgium.

The result is a unique-to-Europe chassis spec with special specifications for the steering, springs and dampers, front anti-roll bar, rear torsion beam and tyres, plus a re-engineered front subframe and engine mounts.

The European Ka+ rides a little lower than the Indian and South American versions, and its ride and handling are much more in keeping with European tastes.

“I kept telling them to make it as good as the Fiesta,” said Palmer. “I reckon they’ve succeeded.” 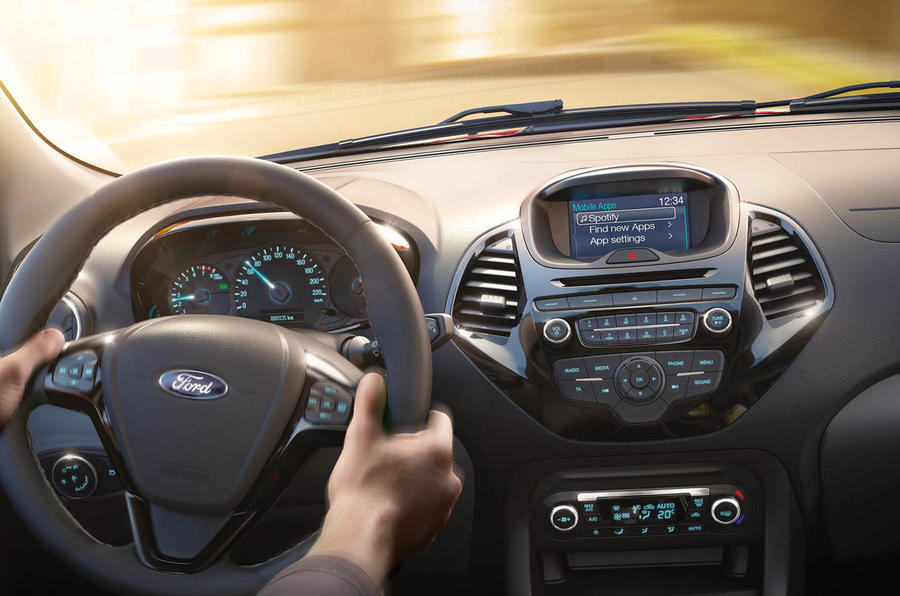 Ford has in the past resisted associations with the budget end of the market, but this time it has named the Kia Rio and Dacia Sandero as competitors for the Ka+, mainly because they offer the same recipe of impressive accommodation for the money.

Our own tests at the Ka+’s launch in Cologne last week proved that a six-footer can fit into the car’s surprisingly generous rear cabin, behind another in the driving seat.

While citing the Kia and Dacia as competitors, Ford avoided mentioning others in the same price bracket, such as the Vauxhall Viva, Suzuki Celerio, MG 3, Peugeot 108, Citroën C1 and basic versions of the Volkswagen Group’s Up-based city car trio, possibly because they don’t have as much interior space as the Ka+.

Ford claims class-leading front head room and rear leg room, aided by the fact that the Ka+ is 42mm higher than the Fiesta, sits on the same 2489mm wheelbase (because it uses Ford’s global small car platform) and, at 3929mm overall, is only 20mm shorter. The Ka+ offers 270 litres of storage space in its boot - enough for two suitcases, and only 20 litres less than is offered by the Fiesta - while split-folding seats increase that space even more.

Later this year, buyers will also be able to order stylised Black and White versions of the KA+, which receive contrasting colour options, black 15in alloy wheels and come exclusively with the more powerful 1.2-litre petrol engine.

The Ka+ is the third Ford model to carry the Ka badge, but it is quite different from the first two following a comprehensive change in Ford’s thinking about how to make money from small cars.

The original Ka started life 20 years ago as a sub-B-segment premium city car; the second was another city car, this time produced in Poland in co-operation with Fiat. 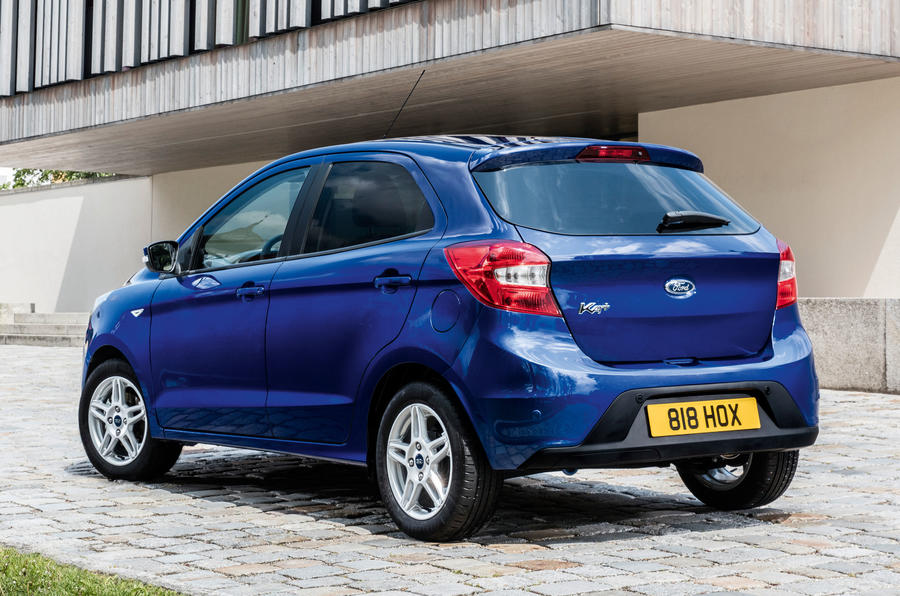 The latest-generation Ka+ is all Ford, but it achieves economies of scale because it is already a volume-selling model in India and South America.

“But we’ve made a different choice about how and where we want to participate. We believe Ka+ offers the practicality and utility many new car buyers need, even if it lacks the sleekness of the Fiesta.

"For us, the sub-B sector is much less of a priority, although we’d never say never.”

Ford's history with trying to foist global cars in Europe has not worked well - *cough* EcoSport *cough*. I am worried that Ka+ will be another mediocre car, and rumours from a mate who is "well placed" are that indeed it isn't up to scratch. He told me the EcoSport was shite well before it was reviewed, so I listen to him.

I like the idea of a cheap and cheerful runabout - which is what the original Ka was. Tinny, noisy but undeniably fun. That's where Ford needed to go - but they just seem to be joining the sub-£10k market late. Vauxhall's Viva was underwhelming when I drove it (seemed good on paper). Ford should be more worried about the Hyundai i10 (the one we have at work is popular though I hate the blue interior), while the VW Up is solid and entertaining enough (even in absolute poverty spec).

Couldn't Ford afford to hire their own designer for this one. The resemblence to the current Nissan Micra seems quite remarkable to me (or do I need to visit the nearest branch of a high street opticians).
androo 20 September 2016

But yet again, as with the Mondeo, the 'new' Fords we're getting aren't new at all. I don't suppose the average buyer will be aware of this, but they may be aware that the new models they're seeing at their local dealer don't look particularly cutting edge compared to what's down the road at Peugeot, Citroën et al.
View all comments (21)