BACK TO ALL NEWS
Currently reading: Ford GT confirmed with 647bhp and 216mph top speed
UP NEXT
How a sat-nav can make you faster around a track

The turbocharged 3.5-litre V6 supercar, which is the fastest car produced by Ford yet, outputs 90% of its peak torque from 3500 rpm. 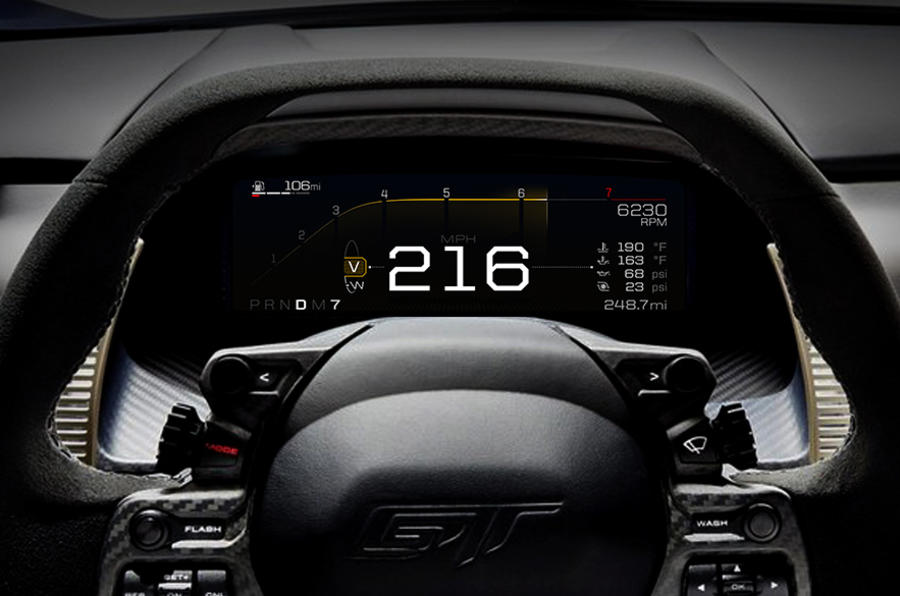 Ford claims its new supercar is quicker around Canada’s Calabogie Motorsports Park race track than the 510bhp/ton McLaren 675LT and 435bhp/ton Ferrari 458 Speciale (a discontinued model). It quotes a 2min 9.8sec laptime for the GT, which is faster than the times it recorded for the McLaren and Ferrari by 1sec and 3.1sec, respectively.

Ford attributes much of this pace to the car’s active aerodynamic and suspension systems.

“The Ford GT is all about performance,” said product development boss Raj Nair. “We achieved considerable weight savings with the carbonfibre architecture. We then reinvested some of that savings into where it counts most – performance, specifically the active dynamics. The result is an even faster car.”

Handy it being such a shed, owners will always have their tools with them when it breaks down. And what an ugly heap it is too, with a scabbymongous interior one would be embarrassed to be seen in. Ford's rapacious, inefficient and unsympathetic dealers would be gleeful at the thought of getting their claws into the kind of mugs who'd shell out for such crap.
Spanner 26 January 2017

My mate had an XR3i in the '80s with a k&n filter and straight through exhaust. He swore it had at least 650bhp and it made Renault 5 turbos look rubbish off the lights. Bit of a backward step ford. Try harder. If a 17 year old with some gaffer tape can get 650 BHP out of a 1.6, we'll you're just lagging.

I can send you his details if you would like to learn the magic of max power, I'm sure even in his 50s he can put your engineers straight with an old coke can, 1/2 litre of redex and some exhaust gum.