BACK TO ALL NEWS
Currently reading: Ford Edge, Kuga and S-Max Vignale models revealed
UP NEXT
Jaguar E-Type at 60: return to the Jabbeke Highway

Ford has showcased new Vignale versions of its Edge, Kuga and S-Max models, at the Geneva motor show.

Adding to the current Mondeo Vignale, Ford has strengthened the brand’s premium range, bringing its total line-up to four models.

The Ford S-Max was revealed in the exclusive Vignale Milano Grigio exterior colour and in Vignale White Platinum.

Bespoke chrome-finish fog lights and 19in polished aluminium wheels were among the exterior design details featured on both the Edge and S-Max Vignale models, with hexagonal-quilted Windsor leather seats, door interiors, central armrest and instrument panel, on the inside.

A concept version of the forthcoming Ford Kuga Vignale also made its world debut at the show. The concept featured leather-clad seats, door trims, instrument panel and boot floor, all with bespoke tuxedo stitching.

Ford said almost 80% of the 102,000 Kugas sold in 2015 were high-specification Titanium models, which would suggest a high demand for luxury in the SUV segment.

A five-door version of the Vignale Mondeo made an appearance, too, which will go on sale next year.

Ford’s Sync3 infotainment system will be included on all models as standard, featuring an 8.0in touchscreen that offers pinch and swipe functionality for the first time. Advanced voice control is also on offer. Users simply speak commands such as, “I need petrol”, and the system will find nearby shops. The Vignale Service app is also included, offering online lifestyle content from the Vignale Magazine, driving tips and information.

The complete engine line-up has yet to be revealed, however, one option will be Ford’s 207bhp bi-turbo 2.0-litre TDCi diesel unit.

New design options are also available from next year, enabling customers to further personalise the models. Ford of Europe director of design Joel Piaskowski said: “For customers, Ford Vignale is a more individualistic way to enjoy luxury and express your style.”

The Ford S-MAX Vignale is available to order now. 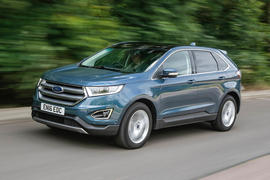 1 March 2016
A huge mistake for Ford. They should have kept hold of at least one of the premium manufactures they owned years ago. But because they sold them all off they have a gaping hole that VAG/ Toyota fills with there premium brands. Adding a little chrome and sticking a new name on it was something Rover did to little effect..

Has the potential to tie

1 March 2016
Has the potential to tie these models to the Lincoln MKZ, MKX and MKC creating a situation potentially similar to the relationship between Opel/Vauxhall models and those of Buick. Neither would otherwise have potential for upmarket sales in Europe and elsewhere. At some point, with these models established, they could even roll out the Lincoln brand.